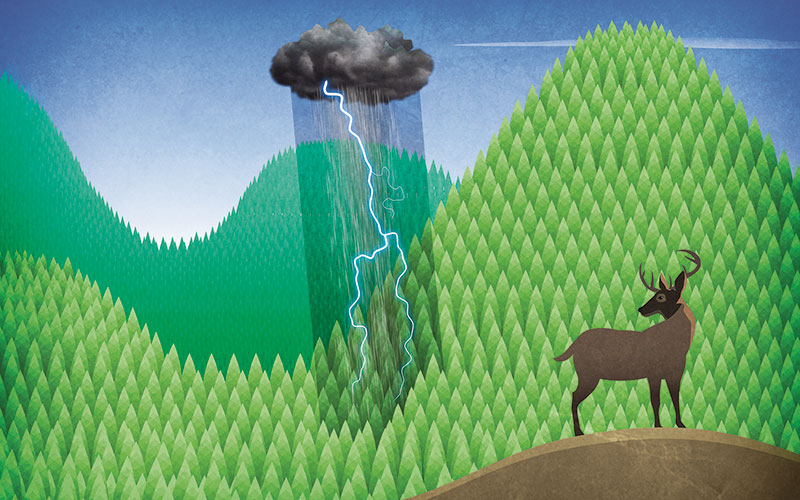 If you’ve ever noticed a swath of trees in an otherwise healthy forest flattened like matchsticks scattered by a giant, you were probably seeing the effects of a microburst or a macroburst. These downward explosions of cold air, which form during severe thunderstorms, leave noticeable changes in woodlands for years to come.

“The trees will be pointing dominantly in one direction, rather than in a perfect circle from the center point [where the fast-moving air first hit the ground], because the thunderstorm was moving as the cold air struck the trees,” says Eric Kelsey, a research assistant professor at New Hampshire’s Plymouth State University and director of research at the Mount Washington Observatory. “Just like if you’re walking when you tip a cup of water, it will spill differently from if you poured it when standing still.”

Microbursts and macrobursts are the same phenomenon, just different sizes. Damaging wind from a microburst covers an area with a maximum diameter of about 2.5 miles, while a burst affecting a larger area is classified as a macroburst.

These downbursts form during strong thunderstorms, typically when there’s a layer of dry air beneath the storm, Kelsey says. Precipitation falls into that layer and evaporates, cooling the air. That dense cold air then sinks, often with dramatic effects.

“If it’s big enough and dense enough, it will hit the ground and spread outward, like if you poured maple syrup on the table,” but much faster, Kelsey says. “These big blobs of cold air hit the ground suddenly—often at 60, 70, 80 miles per hour—and that can cause a lot of damage.”

Although some people liken microbursts and macrobursts to upside-down tornados, the metaphor doesn’t quite fit, Kelsey says. Unlike tornadoes, these downbursts have no rotation and don’t last for a long time. The cold air coming down often chokes the flow of warm air into the thunderstorm, weakening the system, which typically doesn’t return to its previous intensity. That’s why a severe thunderstorm generally produces just one downburst.

IF A TREE FALLS

Both microbursts and macrobursts occur less often in the Northeast than in other parts of the United States, where severe thunderstorms are more common, but the downbursts do make their mark on our landscape. For example, Kelsey says, drivers heading north on I-93 in Thornton, N.H., may notice that the trees on the east side of the highway are thinned out on a hill that was hit about five years ago.

Not every tree will be knocked over when a microburst or macroburst lands. The number of trees that are felled depends on the wind speed, the predominant type of tree where the downburst strikes, and the soil conditions. Kelsey says tree roots loosen more easily in wet soil, so more trees fall in those conditions. The size of a tree’s crown affects how much the wind tips it, and some trees, like white pines, tend to break partway up the trunk rather than being uprooted, he says.

The disturbance caused by a downburst creates new niches for different flora and fauna. “Paper birch loves to grow in disturbed areas,” Kelsey says. “That’s why you often see those birches where soil has been upturned.” So, even though bursts damage trees, they also clear the way for other species to thrive, helping maintain the diversity of the ecosystem.

As for whether bursts are occurring more often and what that could mean in terms of climate change, “Scientists don’t know if there’s a relationship, but we are trying to figure that out,” Kelsey says.