Did you know the first Boston Marathon was essentially a trail race? The roads between the starting line in Ashland and downtown Boston were a dirty, dusty, unpaved mess back in April 1896. The runners didn’t need to navigate rocks and roots, but they had to cope with the ruts left by countless wagon and bicycle wheels. And Newton’s hills were already trying to break runners’ hearts. The top runner wasn’t the local favorite, Harvard track star Richard Grant (he dropped out midrace and lay beneath a water cart to cool himself), but a 22-year-old New York cross-country runner named John J. McDermott.

The roads of the world’s oldest annual marathon have long since been paved, but another legacy from that era gives us the opportunity to run for miles on trails through the heart of Boston: Frederick Law Olmsted’s Emerald Necklace. In fact, Olmsted had just completed two decades of work on this series of parks, which surrounds much of Boston with greenspace, a few months before that first Boston Marathon.

I can barely imagine going for a run in Boston that doesn’t touch at least part of the Emerald Necklace, and most of my favorite runs in the city consist exclusively of Olmsted’s greenway. With the Boston Marathon fast-approaching, I started to think about what would happen if I strung all of those parks and trails together. Turns out you can build a pretty nice marathon route. Although I’ve never attempted such a run, I’ve done each piece during shorter workouts. Using Garmin Connect’s course-building tool, I stitched together a route that includes all of the above.

A diehard mountain runner might scoff at the idea of calling this a trail run, but if you live in an urban area, sometimes the best trails are those right outside your door. By my count, 10.4 miles of this DIY marathon course are on dirt trails, including wide gravel paths, single track, and a grassy cross-country course. Another 9.3 miles follow paved multiuse paths, most of which have beaten dirt trails running parallel. Just 6.5 miles of the course are on roads and sidewalks. A really devoted dirt-seeker could probably squeeze 20 off-pavement miles out of this route.

The course starts on the Commonwealth Avenue Mall and finishes at the Boston Marathon’s Boylston Street finish line. It goes through the Public Garden and Boston Common, passes the Massachusetts State House and AMC’s former headquarters on Joy Street. It goes by the Massachusetts Institute of Technology, Boston University, Emmanuel College, and Northeastern University. It runs behind the Museum of Fine Arts and just blocks from Fenway Park. The final half-mile, though paved, traces the actual Boston Marathon course, heading up Commonwealth Avenue, right onto Hereford Street, left onto Boylston, and then a straight shot to the finish in front of the Boston Public Library. 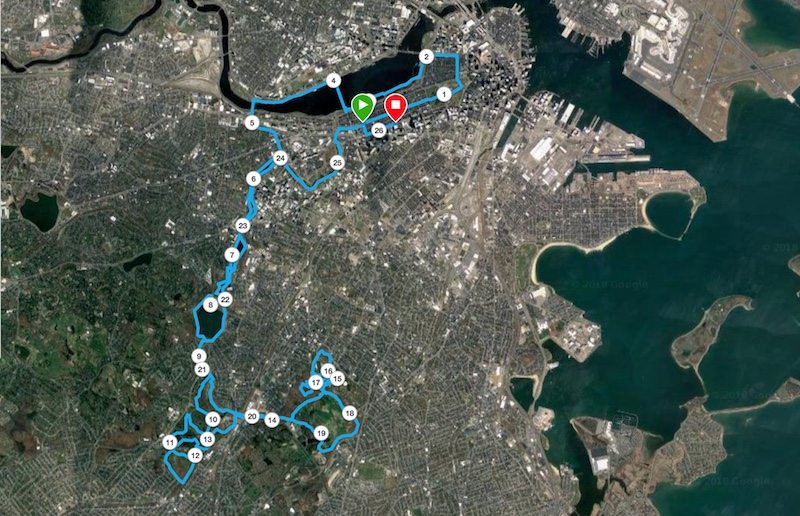 DOWNTOWN (0 to 2.10 miles)
The start of the race is largely on pavement, although it passes through some of Boston’s most iconic parcels of public land. Starting near the western end of the Commonwealth Avenue Mall, the course heads east, through the Public Garden, into Boston Common, up to and across Beacon Street, and down the length of Joy Street (passing AMC’s old headquarters at Number 5), turning left on Cambridge Street, and following that to the Charles River. Cross Storrow Drive on the walking bridge to the Esplanade.

ESPLANADE, CAMBRIDGE, AND BOSTON UNIVERSITY (2.10 to 5.62 miles)
Head southwest (upriver) along the Esplanade bike path; if you want to run on dirt, there’s a beaten path next to the paved path. Stay to the outermost path, keeping the river to your right and the lagoon on your left. At 3.40 miles, cross Massachusetts Avenue on the Harvard Bridge and take the 364.4-Smoot dash into Cambridge, then take a sharp left on the other side of the Charles, continuing upriver on the dirt running path that parallels the water. Head back into Boston on the Boston University Bridge, the next bridge you’ll reach. You’re almost to the best part of the course: Just take Mountfort Street and Park Drive to reach the next set of trails.

FENWAY AND RIVERWAY (5.62 to 9.36 miles)
This is where the running gets good. Paved and dirt trails pass along either side of the Fenway, and inside of those you can even find some single-track. With a couple of deviations, this route follows the western side of the Fenway and Riverway heading outbound and the eastern side inbound. Half a lap of Jamaica Pond leads to a short stretch along Arborway.

ARNOLD ARBORETUM (9.36 to 13.44 miles)
More hills and trails welcome you into Arnold Arboretum, one of my favorite running spots in the city. Paved paths wind around and up each hill, while smaller dirt paths follow the Arboretum’s outer edge. Run through redwoods and past an orchard, alongside blooming lilacs and rhododendron. This route zigs and zags to cover some of the best terrain, so study the map in advance. One note on this section: The trail that takes you down from Hemlock Hill (12.75 through 13.00 miles) isn’t shown on most maps, so once you reach the top follow the trail that leads down the opposite side.

JAMAICA PLAIN & FRANKLIN PARK (13.44 to 20.23 miles)
After exiting the Arboretum via the Blackwell Footpath, it’s a short run up the road to Franklin Park; just go left on Washington Street and right on Arborway. One of my great running regrets is missing the 1992 World Cross Country Championships held here. Athletes who I would follow closely for the next decade had some of their first international success at that meet including perhaps the greatest male and female instance runners of the era, Haile Gebrselassie, Paula Radcliffe. Franklin Park still hosts cross-country races each fall, and the Urban Trail Running Boston Marathon hits some of the course’s highlights, including Bear Cage Hill (at 15.50 miles) and the Wilderness, Franklin Park’s remote back loop (16.50 to 17.00 miles). From the cross-country course, the route makes a clockwise loop around the outside of the William J. Devine Golf Course before heading back toward downtown Boston.

ARNOLD ARBORETUM, RIVERWAY, AND FENWAY (20.23 to 25.20 miles)
After reemerging from Franklin Park, the route retraces its steps to the Arboretum, where you can take the direct route to the main entrance by following the trail just inside the stone wall, parallel to Arborway. From there’s it’s straight back to Jamaica Pond, completing the lap you started earlier, and into the trails of the Riverway, which lead all the way over to Back Bay.

FINISH (25.20 to 26.20 miles)
Your route segues from trails to pavement as you exit the Fenway. Cross over the Massachusetts Turnpike on the Charlesgate bridge to Commonwealth Avenue and turn right. You’re now on the Boston Marathon course, your strides matching those of tens of thousands of past marathoners. Two famous turns remain: right on Hereford Street, left on Boylston Street. The finish line is just blocks away.