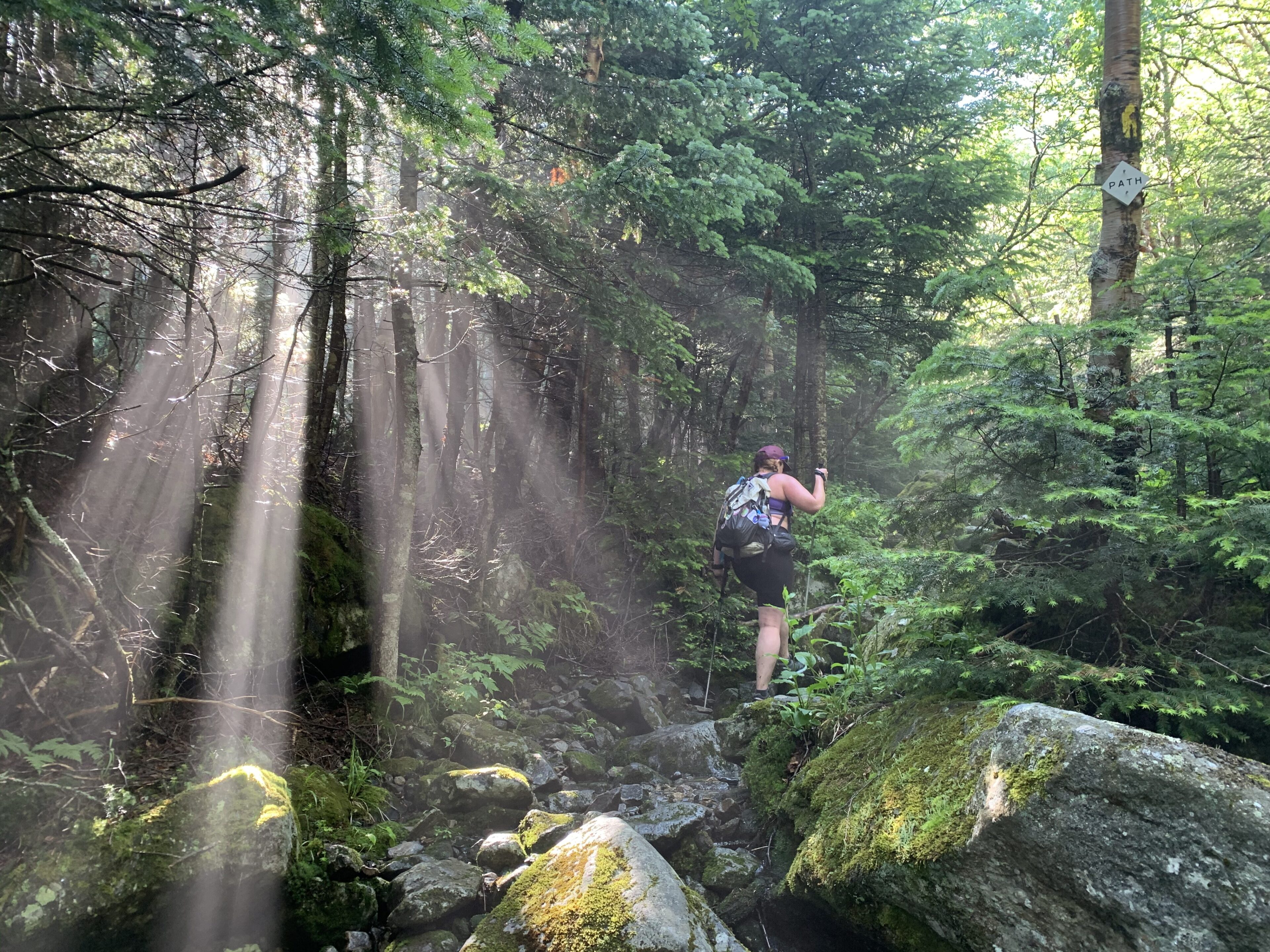 COURTESY OF REBECCA SPERRYIn between treatments for breast cancer, Rebecca Sperry is planning a one-year tracing of the White Mountains.

Note: “Redlining” also refers to the discriminatory practice of denying services, such as bank loans, to residents of a certain area based on their race or ethnicity. For this reason, this story will use the term “tracing” to describe the White Mountain hiking tradition.

Two months into her attempt to hike 1,420 miles of trails in New Hampshire’s White Mountain National Forest, and to do it in just one year, Rebecca Sperry decided to take a day off. She had discovered a lump in her left breast. Waiting impatiently in her doctor’s office, she almost walked out; the trail was where she longed to be. A few days later, however, she was diagnosed with breast cancer. Doctor’s appointments, surgery dates, and cancer treatment plans quickly replaced her hiking aspirations.

Prior to her difficult diagnosis, Sperry—a resident of New Hampshire—was immersed in hiking all of the trails featured in AMC’s White Mountain Guide, a practice known as “redlining” or “tracing.” Many people attempt to trace the White Mountains over a lifetime, but Sperry hoped to accomplish this goal within a single calendar year. This would have earned her the fastest known time (FKT) for a woman completing the route. After months of planning, she began her tracing attempt in January 2020, but safety concerns and travel restrictions caused by the coronavirus pandemic forced her to stop just a few months later. Her pause wouldn’t last long.

“I will be attempting to redline the White Mountains in a single year starting on June 20, 2020,” Sperry commented on the Fastest Known Time official website on June 7, 2020. “I am using the 30th edition of [AMC’s White Mountain Guide]. As far as I know, no female has set or attempted this FKT. I am attempting to accomplish this solo, and will be self-supported.” 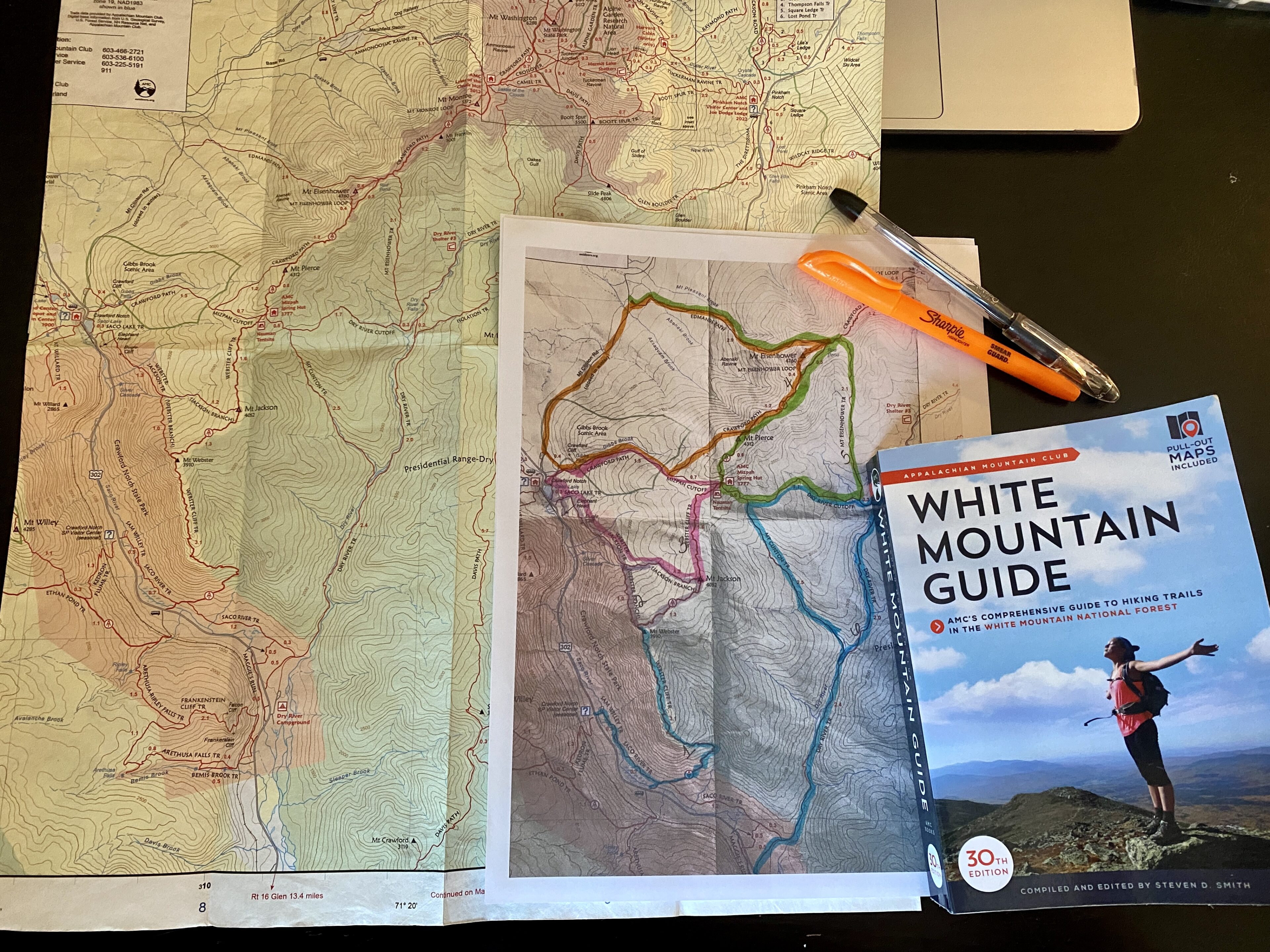 COURTESY OF REBECCA SPERRYSperry is planning to hike every trail in AMC’s White Mountain Guide—a practice known as tracing.

Over the past five years, Sperry has solo-hiked hundreds of miles across the Northeast. After summitting 67 mountains in New England with an elevation of 4,000 feet or more, she hiked 77 of New England’s 100 Highest list before shifting her focus toward tracing the White Mountains.

“Hiking is my passion,” she says. “I became hooked because it just felt so empowering summiting all of these mountains as a woman, especially to do this by myself.”

Sperry, age 37, doesn’t fit the typical tracing demographic, which she identifies as “middle-aged and older men who tend to be retired.” She notes, however, that she has received strong support from the other tracers she has met on the trail. “It’s probably the only community of people that I’ve come across on trail who consistently are like: ‘We trust that you know what you’re doing and we’re not going to be misogynistic,’”she says. “It’s unexpected.” 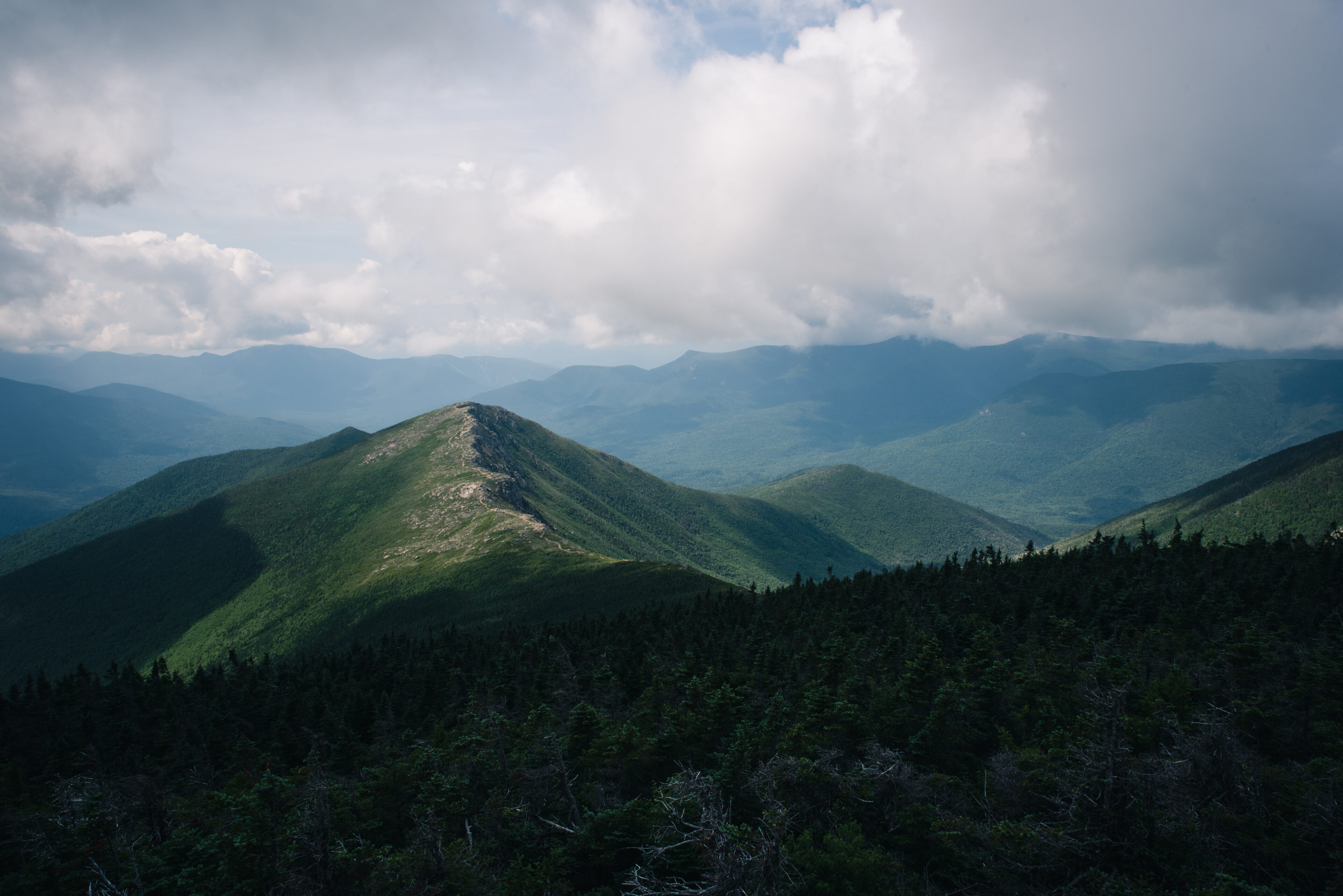 Sperry underwent surgery in September 2020 and began receiving chemotherapy treatments over the following months. For 12 weeks, the drugs she was given intravenously to kill cancer cells also attacked her blood, skin and hair, and gastrointestinal cells. “That’s why typically people who have chemo lose their hair and feel nauseous,” she explains. “The treatment doesn’t only kill certain cells, it kills everything.” Sperry’s doctor recommended that she try exercising to alleviate some of the physical side effects of her treatment but cautioned that it might be difficult. Chemotherapy lowers patients’ blood counts, which makes it harder to get oxygen to your muscles and therefore easier to become winded or tired.

Despite feeling physically and mentally exhausted most of the time, Sperry began going on hikes and walks when she could. “Basically, if I felt well enough, I would force myself to exercise in some way,” she says. “And in my opinion, I think it was huge in my recovery.”

She continues: “I think having been a hiker for a few years and having pushed myself physically to do things, even when I was exhausted on the trail, I had that mindset; I knew how to push through it. So that’s what I did. I’m convinced that if I hadn’t done these hikes, I would not feel basically normal right now.”

COURTESY OF REBECCA SPERRYSperry during one of her treatments for breast cancer.

The World Health Organization reports that cancer is the second leading cause of death globally and breast cancer is the second most common cancer among women living in the United States, according to Centers for Disease Control and Prevention. Sperry has been very public about her cancer experience on social media and through her personal blog. Many people have reached out to her in response to these posts to share their own cancer stories about hiking while in recovery, she says. “Cancer experiences need to be more publicized because shockingly there are a ton of people out there who have cancer,” Sperry says. “And I think a lot of people don’t realize that you can do these things, like going on hikes, while you’re in treatment. I am trying to be a public figure in case someone else needs to see it.”

Sperry experiences her share of hard days. She is currently receiving radiation therapy—which she describes as feeling like “getting a really, really bad sunburn”—and taking medication that suppresses her body’s production of estrogen and progesterone hormones. “Taking this medication is basically causing me to have menopause,” she said. “Some of the symptoms are awful. It’s just such a weird feeling at an age where I technically should be able to get pregnant, but I can’t because of the medication. My cancer recovery journey won’t end until next year. It never really ends though.”

Mapping out her future hiking plans is a welcome distraction, however. “When I was going through chemo and the whole diagnostic process, I needed to have something to focus my brain on that wasn’t sad and cancer related,” she explains. Although she is continuing to process having had her life interrupted by a traumatic and often painful cancer recovery treatment, Sperry’s outlook remains positive—in part because she’s planning to begin another one-year tracing attempt in the White Mountains in June 2021.

“There are times when you’re hiking and you feel a sense of panic wash over you when you realize you’re not on the trail,” Sperry reflects. “If you let your fear take over then you’re not going to make rational decisions. I always try to remind myself that the worst thing that can happen is that I have to turn around and go back the way I came.”

From Small to Strong: Battling Anorexia on the Appalachian Trail

6 of the Best Hikes in Southern New Hampshire