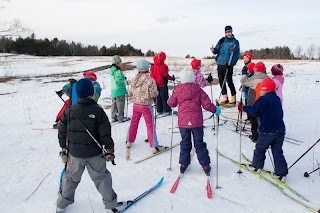 In certain communities around New England, however, a different story is being told. Last year, nearly 1,500 children participated in 50 organized clubs around the Northeast, according to Abby Weissman, youth and introductory programs director at NENSA, the New England Nordic Ski Association. Last year’s participation numbers shot up 10 percent over the 2008-2009 season. And Weissman is fielding an increasing number of calls from people interested in starting kids’ cross-country ski programs. 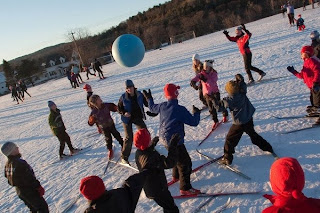 These programs share a name and a philosophy. Bill Koch, America’s first Olympic medalist in Nordic skiing, inspired interest in the sport after winning a silver medal in the 1976 Olympics. Youth programs around the Northeast named their league after the Olympian—but only after Koch extracted a promise from the organizers: Fun had to come first.

Peter Milliken remembers having fun on skinny skis when he started in what would become a Bill Koch League program in Carlisle, Mass., at age 5. His forty-something father started at the same time, learning along with his son as he volunteered with the program. The boy liked skiing enough to continue all the way through high school and to race in college.

Milliken is now a father and a teacher in a similar program, the Ford Sayre Ski Council in Hanover, N.H. Its Bill Koch League Nordic program also encourages parents to ski alongside their children, learning and teaching. Peter and his wife, Ashley, work with the program’s youngest skiers, first and second graders, a group that has included both of their daughters. Kids are given the skills to race, but the focus is on personal achievement, not on winning. Instructors—like Peter Milliken, many of them former collegiate or even Olympic skiers—teach by playing games. Tag. Relay races. Obstacle course races. Balance games. Activities that slyly teach fundamental skills and give both structure and intensity to the lessons. 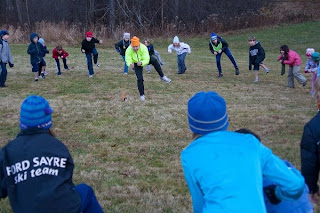 For the past two winters, 8-year-old Evelina Levy has played these games and skied twice a week for an hour after school with Peter and Ashley Milliken. Evelina’s mother, Caroline, enrolled her daughter in the program because she likes Nordic skiing and wants to share the lifetime sport with her. Evelina doesn’t seem to be aware that she is being trained to ski fast. She likes it because she’s with her friends and because she’s playing games. “Kids are all different,” Caroline says, “but for Evie, more structure and more intensity translated into more fun.”

Caroline thinks that the two of them might be ready to ski some of Hanover’s cross-country trails together. She can see the benefits of the Ford Sayre program out ahead of them in the skiers who are just a couple of years older than Evelina. “I see the older kids zipping along,” she says. “They are so confident, so good, and so fit.” She signed up Evelina, now in third grade, for another season this year. “I didn’t really give her a choice,” Caroline says.

That parental fiat turns out to be important, according to David Goodman, author of Best Backcountry Skiing in the Northeast, recently published by AMC Books. Goodman says that he and his wife made learning to ski “non-negotiable” for their two children. “All parents have those things, whether it’s music lessons or religious school,” Goodman says. “We told our kids, ‘You need to know how to ski because winters in Vermont are long, and skiing makes winter fun.'”

Keep it short. “You have to go their pace,” says Milliken. “It’s hard for me to do—I want to get my workout in—but understanding that is key to getting kids to come back.” Goodman characterizes early ski outings with his children as “what you do between having hot chocolate.”

Keep it simple. “Cross-country skiing is one of the most accessible sports,” says NENSA’s Abby Weissman. “Kids can just go out in their backyards. They don’t need to go to cross-country ski centers to ski.” Loops around the backyard add up, too: NENSA’s web-based “Ski for Ks” rewards program lets young skiers track their cumulative mileage online.

Keep costs down. Nordic skiing isn’t as expensive as downhill skiing, but the gear can be costly, and choosing among options can be intimidating. Communities with ski programs often hold ski swaps and support retail stores that rent equipment. NENSA has worked in recent years to lower the cost barrier, creating a ski-lease program for its members. Cross-country ski centers often rent gear as well.

Bring other kids along. “You may think it’s romantic to go out on the trails with your family alone,” says Milliken, “but it usually works better if two or more families go out together. Kids like having buddies, and they whine less when other kids are around.”

Mix it up. In the Ford Sayre program, Milliken may spend half a practice with his younger skiers simply playing on a downhill slope. “Kids get excited about going down the hill,” he says, “and they don’t really notice that they’re also herringboning back up the hill.” They’re practicing an important cross-country skill, but it feels like fun. If a ski starts to feel like a slog, set up timed or relay races along short stretches. Ask kids to see how far they can glide using only one ski. Make up treasure hunts on the fly. Do it together. “There aren’t many sports that you can share together as a family, across the generations,” Milliken says. “My father is 81 years old, and he and I still ski together.”

Learn more
– Check out some ski games used by the New England Bill Koch League.
– Listen to Bill Littlefield’s “Only a Game” January 30, 2010 NPR segment on the Bill Koch League in eastern Massachusetts.
– Find more information on the Ford Sayre program in Hanover, NH.
– Purchase a copy of Best Backcountry Skiing in the Northeast: 50 Classic Ski Tours in New England and New York, by David Goodman.