Trail Running in the White Mountains: Q&A With Ski the Whites’ Andrew Drummond 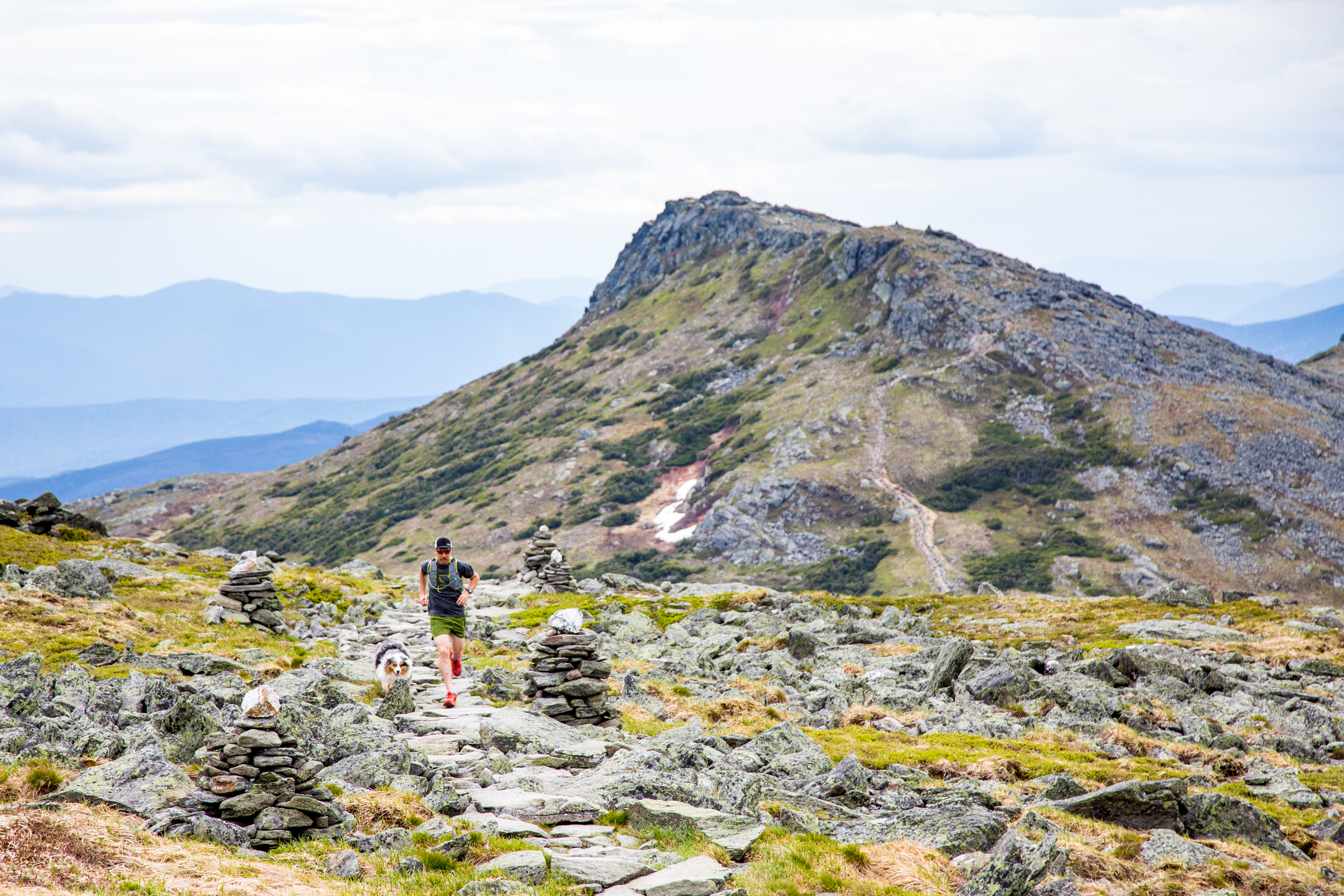 Hilary McCoyAndrew Drummond spends his summers trail running in the White Mountains. Here, he and his dog, Squall, make their way along Davis Path just above AMC’s Lakes of the Clouds Hut, with Mount Monroe in the background.

We may be full-on into springtime running weather here in Greater Boston, but further north, where a foot of snow still blankets most peaks and valleys, it’s still ski season. Lacing up our trail shoes and heading out for a run in the White Mountains, in other words, probably seems a long way off for most of us. It really isn’t, though. In a month’s time, many of the trails will be cleared of snow (though muddy), the sun will shine brightly onto the mountainsides, and it will be running season again.

The time to plan those runs—especially the longer ones—is now. Few people know more about trail running in the White Mountains than Andrew Drummond, founder and owner of Ski the Whites, an outfitter in Jackson, N.H., selling alpine gear of all kinds—including for trail running. Spend enough time in New Hampshire’s trails and towns, and you’ll see folks wearing gear emblazoned with “Ski the Whites” and “Run the Whites.” We sat down with Drummond and asked him about what he loves about running in the White Mountains and his recommendations for planning the perfect summer adventure.

Hey, Andrew. Would you say you do most of your running in the White Mountains, or do you venture elsewhere?

I spend a lot of time in Madison, N.H., where I live, running dirt roads and working on speed. It pays off to mix up your running in all terrain to work different muscle groups and stay well-balanced. The White Mountains will beat you up, so I tend to run those trails more sparingly; once or twice a week I’ll make a point to get above tree line.

What are the strengths of the White Mountains, in terms of trail running?

The White Mountains really have it all. While they are known for their technical trails, there are many smoother trails at lower elevation. Recently, I’ve spent a little more time exploring the Randolph Mountain Club trails off [Mount] Adams.

If you’re looking for smooth, buffed-out trails with views, you’re not going to find them here.

Tell us about a favorite route or trail.

The Southern Presidentials are a favorite among many trail runners just for the views alone. It’s also a little more “runnable” than the northern section. The descent into Lakes of the Clouds is certainly up there. Chocorua [Loop] is up there as well, since it has a numerous routes, incredible views, and is very runnable—and not far from my house in Madison.

You’re obviously quite comfortable running in the White Mountains, but do they ever surprise you?

All the time. Weather is synonymous when talking about the White Mountains, and it’s what creates those magical moments, like double rainbows over the Sandwich Range, to horrific trail conditions. Every day is different out there, and more often than not there’s going to be something unique that stands out from a long run in the mountains.

What is it about the trail running community that you love?

We all have this common bond: spending time in the mountains. It doesn’t matter how fast you’re moving out there, it’s the fact that you’re out there. It’s great to meet runners of all ages and abilities who get equally excited to tell you about what they’ve been up to and what they’re planning. Sharing stories is a source of inspiration to keep getting out there, even when the body may say otherwise.

Share a memorable story from a trail run. First one that comes to mind.

My first White Mountain Hut traverse, I decided to do it a little differently: from West to East, which is more technical, but everything was going well. So well, in fact, that I added all the summits in the Presidentials, just because. It wasn’t until coming off Madison my body started to fall apart, and my right knee started to ache, and every step I felt a sharp pain shoot up my leg.

My girlfriend was supposed to meet me at the end, and I thought she might want to join up for the last 4 miles to Carter Notch Hut. There was a slight miscommunication on my part, and she had pizza and beer waiting for me and wasn’t dressed for hiking. She thought the route ended in the Nineteen-Mile Brook Trail parking lot. She left and went to a friend’s house while I grinded out some incredibly tough miles, as I was 17 hours deep into the effort. It all worked out, and I got my pizza and beer a couple hours later, as I stumbled out of the woods. It’s a reminder that it takes a support crew to get some of these longer runs accomplished.

What’s one piece of advice you’d give a runner from, say, Boston who’s thinking about driving north to do some running.

Find a goal that drives you. For some this may be “running” a Pemi Loop or Presidential Traverse; there’s a lot of hiking on these “runs.” For others, that might be something shorter or longer. It’s really about staying motivated and putting in the right amount of training preparing for time in the mountains. Look outside of the popular routes and spend time in each of the mountain ranges within the White Mountains. They are all special in their own way.

You own a gear shop, and people love gear, so let’s talk about gear. What’s one piece of gear you currently can’t live without?

I’ve really enjoyed the new Ultimate Direction Fastpack 15 backpack. It allows me to carry everything I need comfortably, plus lug around a DSLR camera if I’m looking to do some photography along the way. But more important is footwear; the Whites love to eat up trail shoes, so look for something with a Vibram sole and excellent grip. I currently run in HOKA ONE ONE Speedgoats.

A Florida Girl’s Guide to Hiking in the White Mountains