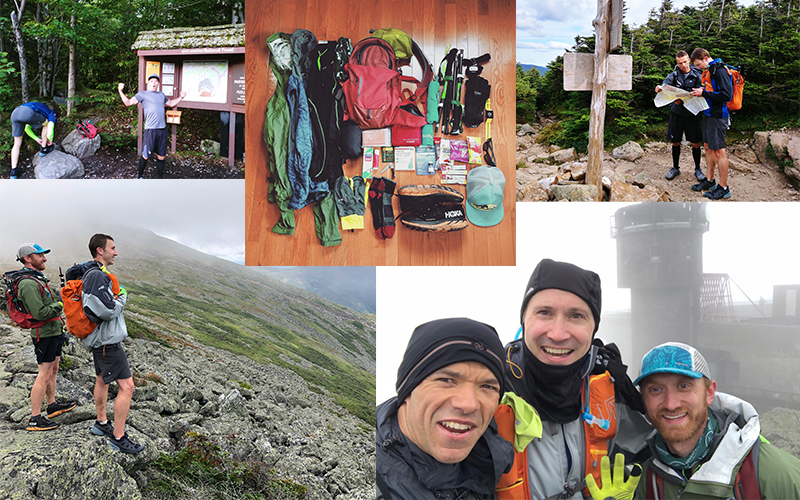 Steve Holt and Rob PylesTrail running the Presidential Traverse in August was a satisfying challenge for the author and two friends, who brought home many photos and lessons learned.

Well, we did it. On Friday, August 23, two friends and I finished the adventure for which we’d been training for more than a year: we completed a single-day Presidential Traverse in New Hampshire’s White Mountains, running as much of it as we could. I’ll save the more harrowing tales for the magazine feature, scheduled for our Summer 2020 print issue, but here are six takeaways to serve as a brief recap of our day in the mountains:

1. This is an advanced activity and not for everyone.

A hiker completing a Presidential Traverse will have summited seven of New Hampshire’s highest and hairiest peaks (or more, depending on one’s definition of the route), covering from 19–23 miles in the process. It is typically completed in two or three days. A single-day traverse, in even the best weather, is quite difficult, requiring months of training. Attempting to run portions of the trail takes that difficulty up another notch, as the terrain is some of the rockiest in the East—a minefield of potential ankle injuries. All three of us were thankful we took the time to lay the aerobic base (distance running) we did, throwing in plenty of long, slow hills on technical trails. This training made all the difference. We were also thankful we went into it knowing it would be difficult, demonstrating the importance of realistic expectation-setting.

2. The route is maybe 30 percent runnable. (for us mere mortals)

We may have been wearing trail running sneakers and packs, but we were walking most of the traverse. Walking fast, or power-hiking, maybe, but walking. The elevation gain all the way up Mount Monroe (3,500 feet) and around all the peaks was just too much. Only after Mount Washington, when the Crawford Path begins its slow roll downward toward the notch, were we able to (at times) break into an extended trot. And oh, did that feel good.

An experienced New Hampshire runner told me pre-Presi that the White Mountains chew up footwear, so choose a trail runner with a sturdy outsole, or tread—ideally, a shoe with a Vibram sole. I did not heed this advice, and my shoes paid the price. Parts of the tread on my expensive, two-month-new trail runners had peeled back from the sole. I was lucky they didn’t disintegrate up in the mountains, which could have created a real safety issue for our group.

4. Pack for the worst-case scenario.

We didn’t need our space blankets, fire-starters, or headlamps, but I am sure glad we had them. I’m also glad we all brought just the right layers for the morning-of forecast—which you should study as scripture before attempting something like this! The heaviest thing we packed and didn’t use were trekking poles, but I was still glad we had them in case of wet or muddy terrain.

In an attempt to complete a Presidential Traverse quickly in a single day, remember to stop and appreciate where you are and what you’re doing. We were literally on top of world, among the oldest and most iconic geology and scenery—at least in the eastern United States. We celebrated each summit. We took photos. We laughed. We marveled. Add to that the acknowledgement that we have the physical ability to complete a hike like this, and we were awash with gratefulness most of the day.

I’m writing that as a user and enjoyer of the White Mountain trail system, not an employee of Appalachian Mountain Club. On both sides of our traverse, we stayed overnight at AMC’s Highland Center, whose staff was so encouraging and accommodating, offering rides to the trail head and trail breakfasts before our pre-dawn departure. After the initial 4,000-foot climb up Mount Madison, ducking into a warm and buzzing Madison Spring Hut felt luxurious. The snacks, the water fill-up, the coffee, the tables to spread out the map and plan—it was all a gift. And then, to return to a warm meal, a cold beer, and comfortable bunk at the Highland Center was the perfect end to an unforgettable day.

A Florida Girl’s Guide to Hiking in the White Mountains