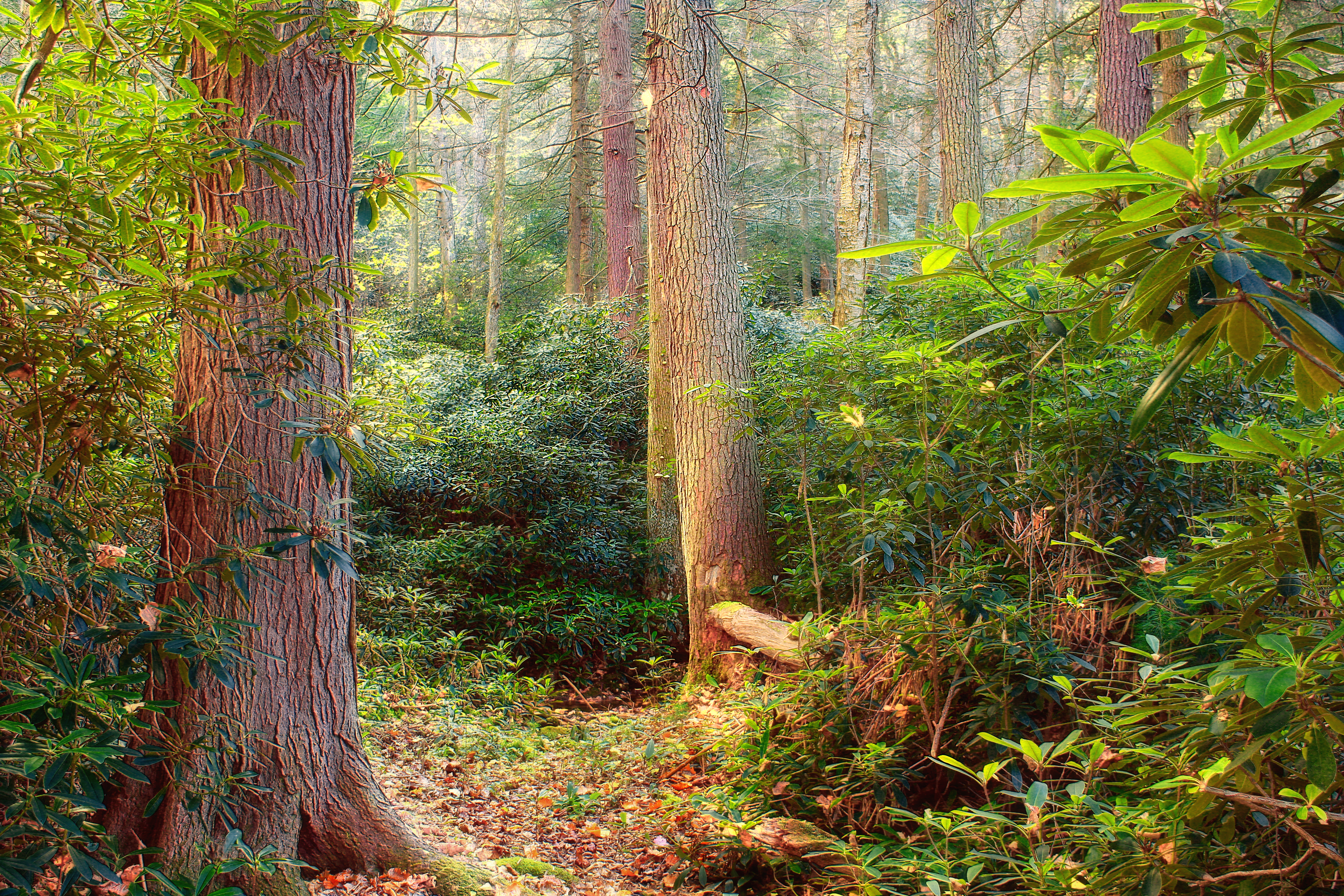 Terry Berntsen is legendary in AMC’s Delaware Valley Chapter for her ability to plan group trips to interesting destinations that also include fantastic hiking.

In 2017, after completing both the Loyalsock and Laurel Highlands Trails end-to-end with day hiking groups, Berentsen was looking for a new trail challenge. She engaged fellow chapter members Rich Pace and Susan Weida as co-leaders for the adventure, and the three decided to tackle the Standing Stone Trail. Pace served as a valuable resource for the group as he had hiked parts of the trail earlier when it was named the Link Trail. The group plan was to hike the trail during three-day weekends in the fall and spring over two years.

The year before, in 2016, the Standing Stone Trail had been named the Pennsylvania Department of Conservation and Natural Resources (DCNR) Trail of the Year. At 84 miles, it seemed just the challenge the group would enjoy. The trail traverses the ridges and valleys of Central Pennsylvania, connecting the Mid-State Trail south of State College in the Detweiler Run Natural Area with the Tuscarora Trail in the south in Cowan’s Gap State Park.

Standing Stone was previously named the Link Trail because it linked these two destination trails. However, in 2007, a small and dedicated group of local outdoor lovers and trail builders felt the trail deserved much more distinction and renamed it after one of the iconic monuments along its route. They formed the Standing Stone Trail Club and have transformed the trail with easy-to-read blazes, significantly improved trail building in difficult areas, a comprehensive trail guide, and a website packed with information. 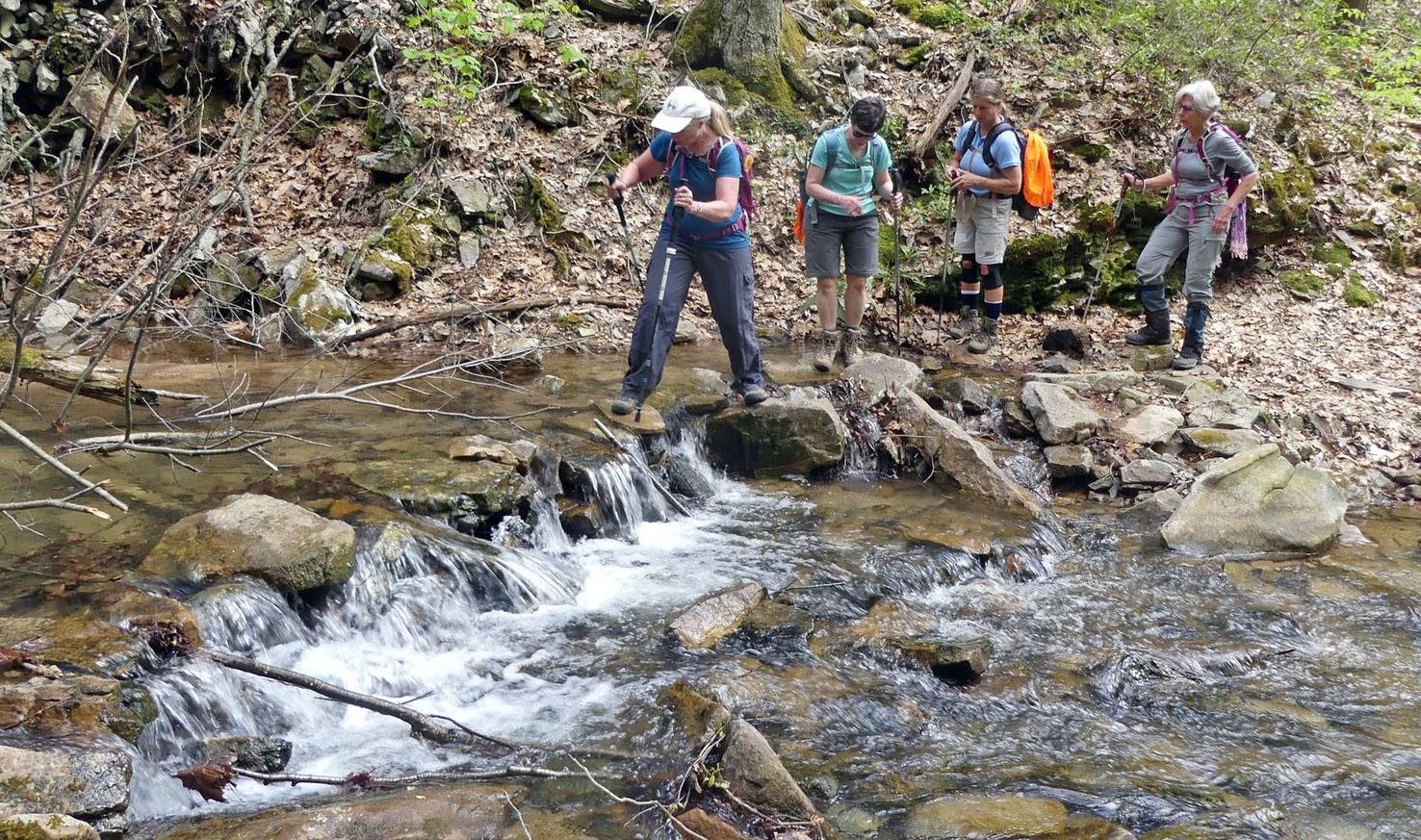 Rich Pace<br />Hikers from AMC’s Delaware Valley Chapter make their way across a creek along the Standing Stone Trail. 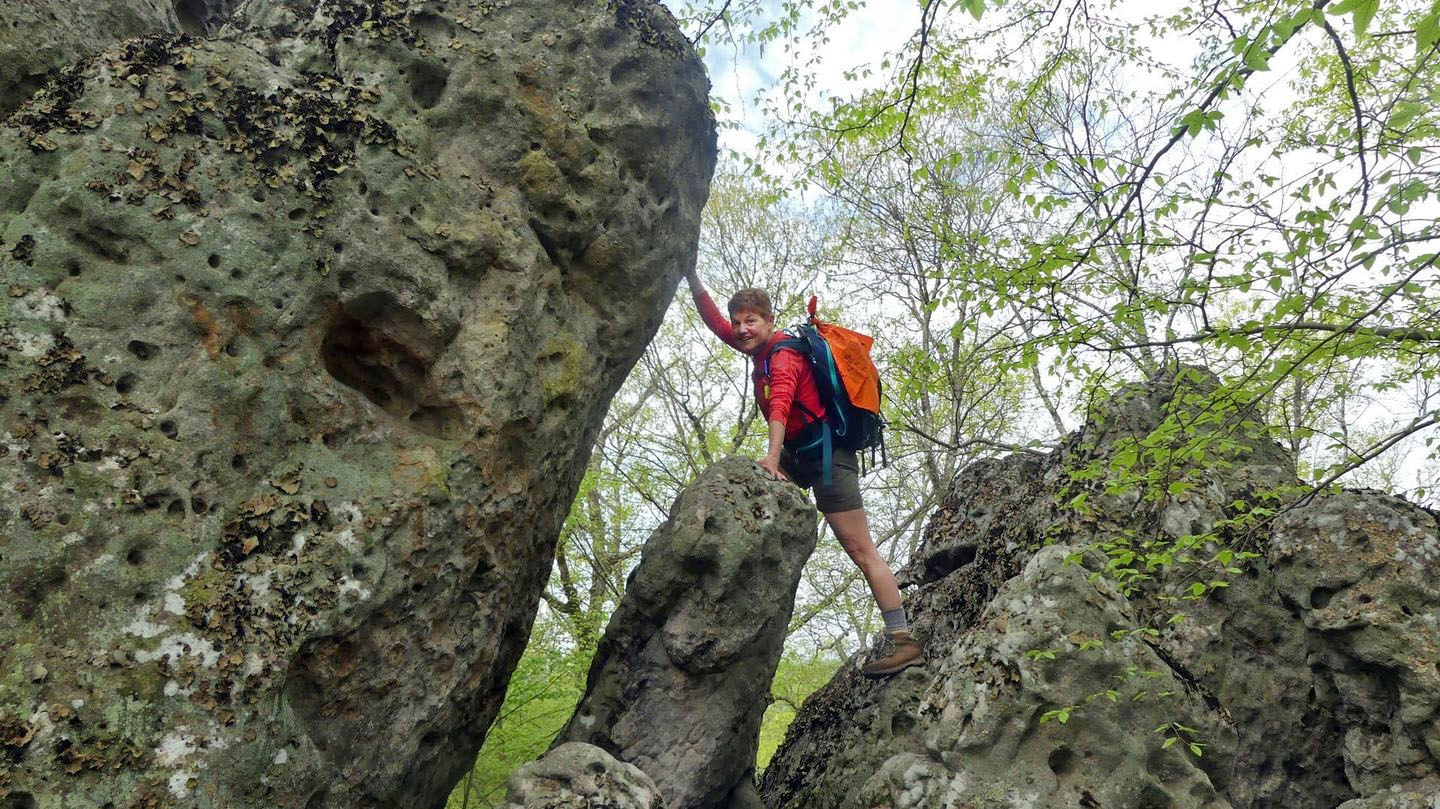 The route’s mid-point also provides one of the most popular hikes of the trail: The Thousand Steps. Rising from the small town of Mapleton, Pa., The Thousand Steps were constructed in 1936 by workers of the Harbison-Walker brickmaking company in nearby Mt. Union. The rocks at the top of Jacks Mountain, once part of an ancient seabed that were exposed and bleached by the elements, provided ganister—a hard, fine-grained sandstone used in the manufacture of silica bricks. The bricks had been in great demand for their use in the lining high-temperature steel furnaces of the early 1900s.

At the top of the 1,043 steps lies evidence of the Dinky House, where the cabled carts used to transport the ganister down the mountain.

“Each Harbison-Walker quarryman would wake before dawn and walk the three miles from Mount Union to the steps along the recently paved Route 22,” writes Abbe Hamilton in Where and When Pennsylvania, Summer 2019. “The workers toted their thick rubber gloves, wire brush, and 16-pound sledge up the Thousand Steps (in case you thought your day pack was heavy!) and work until they’d loaded six tons of ganister apiece. Rain or shine, every day except Sunday, the dinky carts would run. In the most extreme storms, the men sheltered in the stone dinky house or blacksmith’s shop on top of the mountain.”

Near the northern terminus of the trail is evidence of even earlier industry at Greenwood Furnace State Park: a preserved iron-making community that flourished from 1834 to 1903. At the southern terminus of the trail in Cowans Gap State Park is evidence of trail-building and cabin construction done by the Civilian Conservation Corps (CCC) in the 1930s. 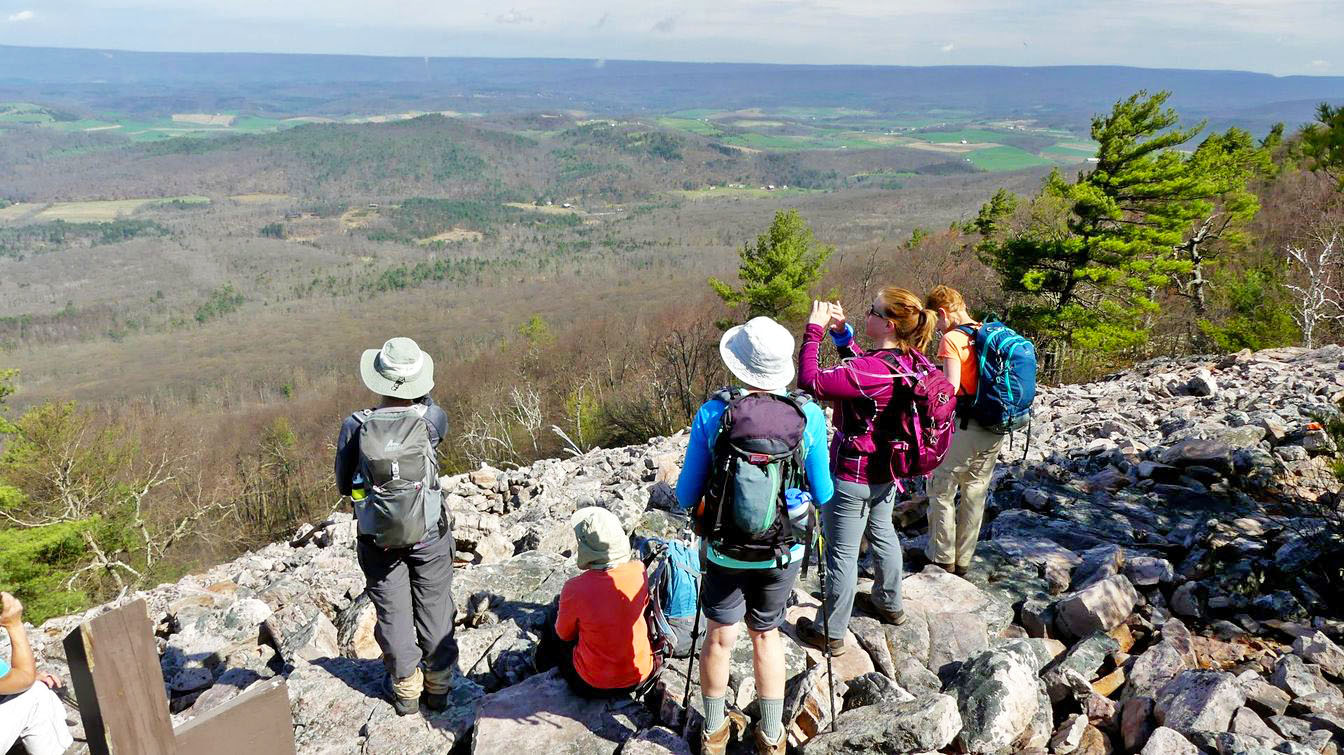 Many people backpack the Standing Stone Trail, but the group from the Delaware-Valley Chapter include committed day hikers who like a good meal and warm bunk at the end of the day. Due to the remote nature of the area, accommodations are very limited. We combined staying at a church camp in the far northern region, cabins in a large resort community on Raystown Lake in the central section, and at the Ironmaster’s Mansion on the Appalachian Trail and Cowan’s Gap State Park in the southern section. The Standing Stone Trail Club has designated sections of the trail with parking lots at either end to provide day hiking opportunities.

Drives to the trail heads were a bit longer than on past trips, again because of the remoteness. The chapter hiking group uses a key exchange process whereby participants are split into two groups who hike the trail sections from parking lots at opposite ends of the section chosen for the day. Each driver brings a second key for their car and provides it to their partner driver in the other group who returns this car to the lodging. It should also be mentioned that many of the trail approaches are on logging or secondary roads that require a high-clearance vehicle.

Because a significant portion of the trail is on state game lands, it is a good idea to reach out to the Pennsylvania Game Commission regarding a group hike. We were not required to get a permit as long as we stayed solely on the trail and did not camp or do any type of trail work; however, the game commission officer did advise others in the area that we would be on the trail. And, of course, blaze orange must be worn during hunting season.

Sections of the trail are appropriate for stronger, experienced hikers and participants should be screened accordingly. The Delaware Valley group needed to reroute on several occasions during heavy rain to maintain safety on high rocky sections of the trail. Wayfinding on the trail is generally easy due to the improvements made by the Standing Stone Trail Club. According to Rich Pace, who had hiked sections of the old Link Trail, the trail has been improved by this great group of community volunteers.

6 of the Best Hikes in Southern New Hampshire

Intro to Whitewater: An AMC Trip Leader Wants to Run a River With You