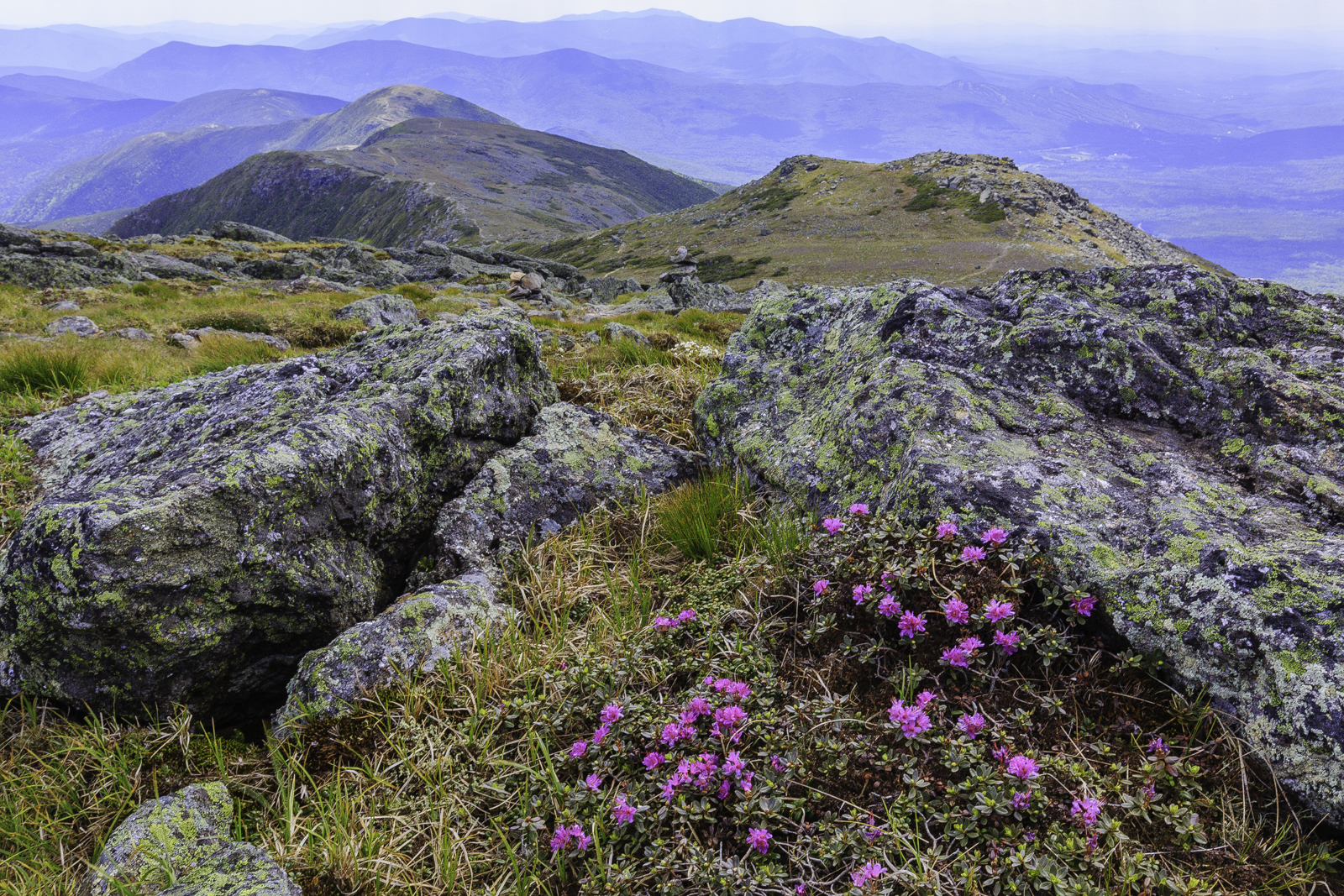 RAJ DASLapland rosebay, or Rhododendron lapponicum, grows near the summit of Mount Monroe in the White Mountain National Forest New Hampshire. Alpine plants are particularly vulnerable to changes in the climate and weather patterns.

Reaching the summit after a long hike can feel like entering another world: amazing views, occasionally wild weather—and unique plants.

Despite the harsh conditions associated with being above tree line in the so-called alpine zone of northern New England, many plants usually found only in the Arctic regions extend into these habitats. These include many of the peaks in New Hampshire’s White Mountains.

But because these alpine plants have specifically adapted to live in such extreme environments, they are especially vulnerable to climatic change. AMC’s staff scientist Georgia Murray has been leading efforts to collect data on alpine plant flowering times in the White Mountains for nearly 20 years, documenting even the slightest changes over time.

Through a community science approach, hikers and staff volunteer are asked to collect data on plant phenology—the study of the timing of seasonal events in conjunction with weather conditions. In this case, that means recording the flowering time of six alpine plant species found in White Mountain National Forest: Bigelow’s Sedge, Mountain Avens, Diapensia, Mountain Cranberry, Labrador Tea, and Alpine Bilberry. Several of these plants are also found across other high peaks in the Northeast.

AMC’s research, begun in 2004 under the name Mountain Watch, is now a partnership called Northeast Alpine Flower Watch with the Adirondack Mountain Club in New York, the Green Mountain Club in Vermont, and Baxter State Park in Maine.

The goal of the research: to track any changes in alpine plant phenology as the climate changes. 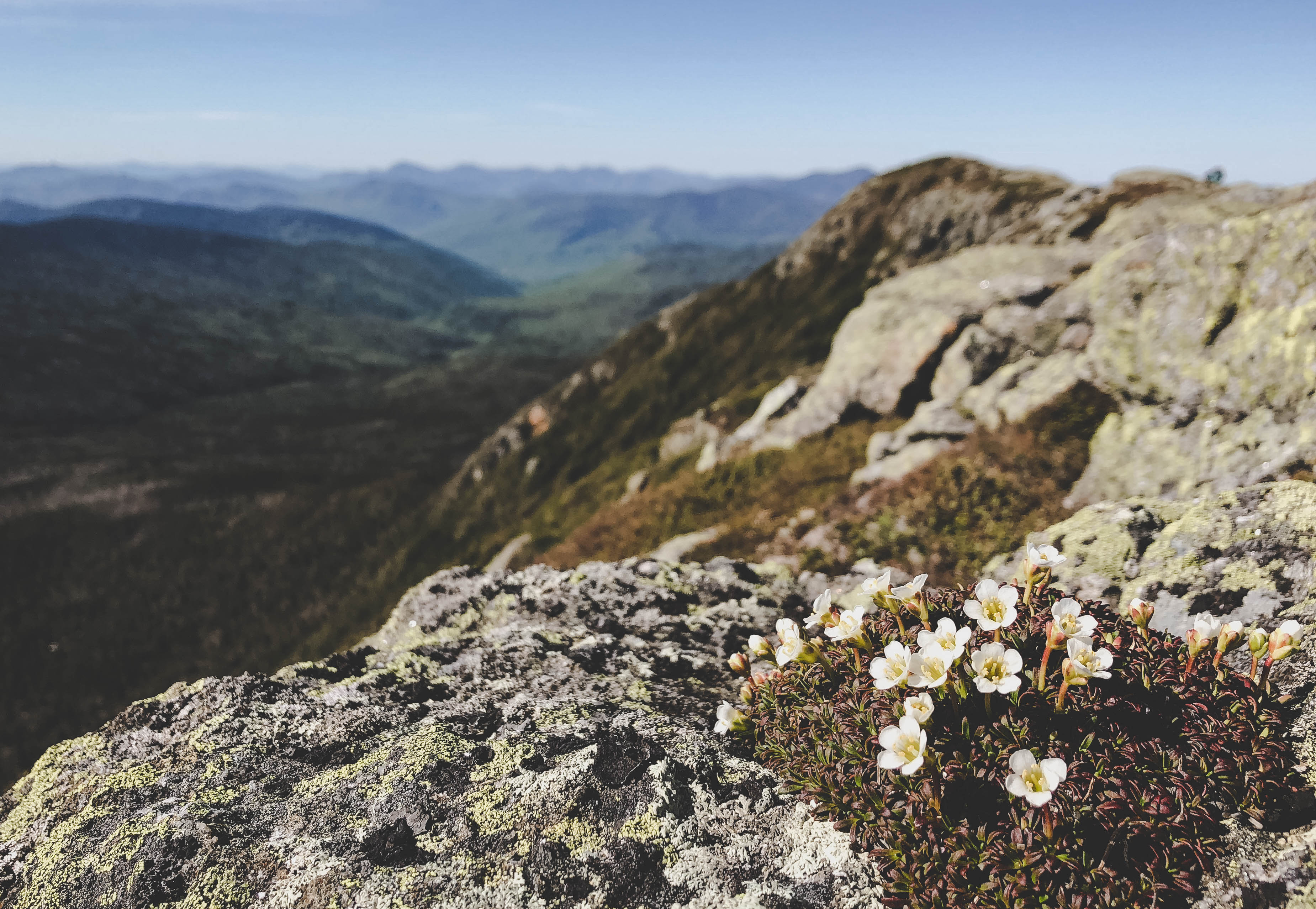 EMILY DAVENPORTHikers enjoy the Alpine Garden Trail, on Mount Washington, for its assortment of alpine plants and flowers.

Studying some weather variables, such as snow depth, in mountain regions can be difficult due to physical conditions. Even so, scientists know that winters in the White Mountains are generally now shorter, milder, and less snowy, while extreme weather events are on the rise.

Meanwhile, AMC’s initial research suggest some alpine plants are flowering earlier than they used to, but only by a day or two. Even though participants have been collecting data on flowering times for almost two decades, Murray says it’s too early to link any timing differences to climate change. That’s because climate change takes place over centuries, not decades, she says.

At AMC’s Pinkham Notch Visitor Center in New Hampshire, for example, data show the climate has been warming over the last century.

“We can look at how plants respond in a particular year but examining for climate-related shifts in flowering time requires longer-term data,” Murray says.

“What we’re trying to do is model the flowering time to the specific weather variables we’re seeing each year,” Murrays says. “And then we can answer that question about if we are seeing effects of climate change.” 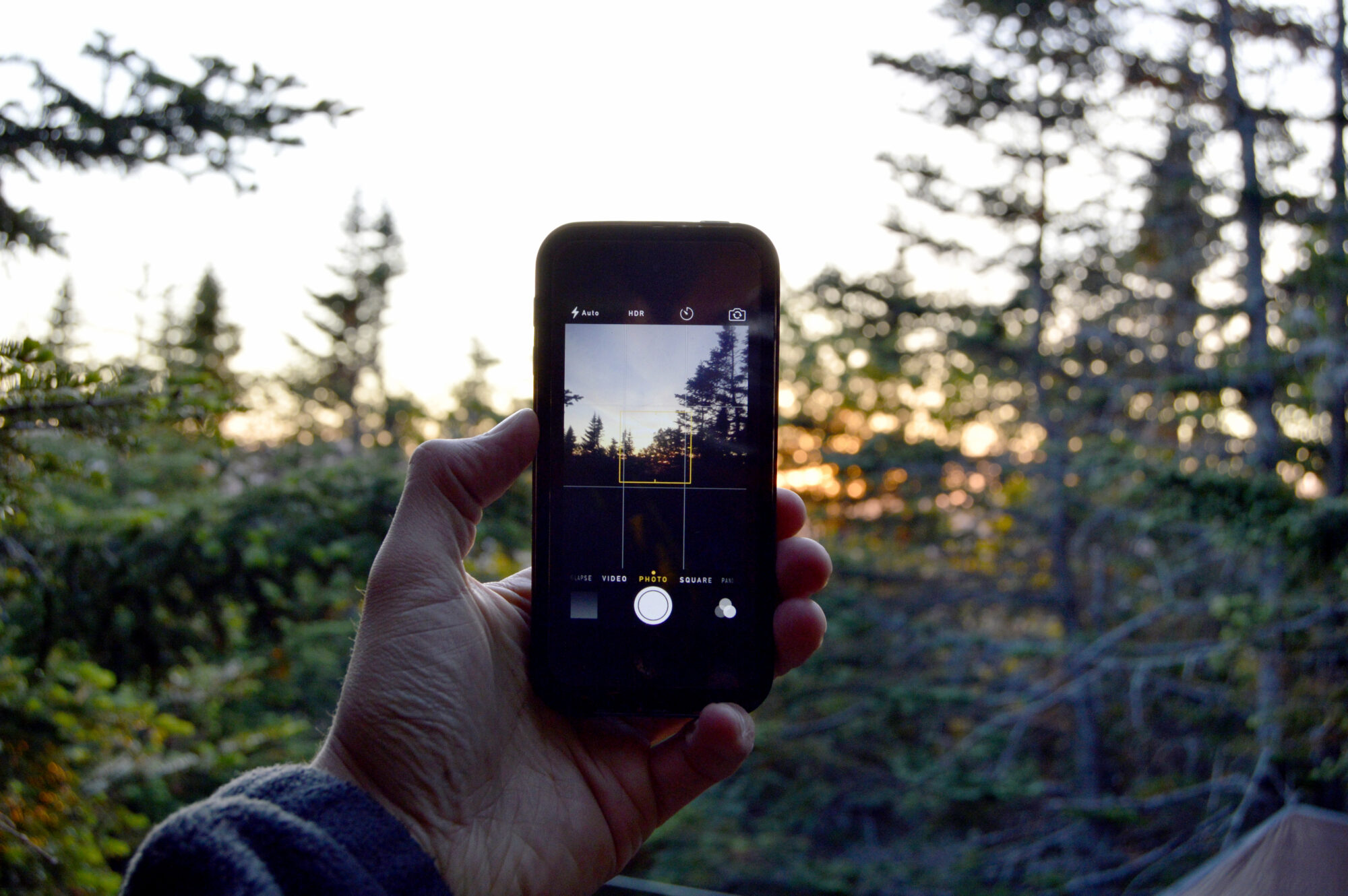 When AMC’s alpine plant monitoring project began 17 years ago, research was limited to the areas around AMC’s high mountain huts, where AMC’s naturalist staff was trained in recording data. Hikers in the area could volunteer to record data as well, adding a community science component to the project.

Back then, all data was collected on paper forms. Of course, that caused problems, like mislabeling locations on a map or participants forgetting to write down the date. Some volunteers misidentified plants, too.

And Murray and the other researchers were also still trying different methodologies: is it better to send people to the same location, or let them go to random locations? Covering more locations would improve the data set but introduces potential for error in recording locations.

So, in 2018, the Northeast Alpine Flower Watch started using iNaturalist, a smartphone app that crowdsources plant and animal observations. The app solves many problems: it records specific location and time data of observations (even without cell service), it requires participants to take photos of the plants, and it provides information to help participants identify plants, if they choose to.

“Mountain landscapes in particular are places where we need this kind of filling-in of gaps,” Murray says. “We feel like this community science model is getting to the point that smartphones eliminate [the questions of] ‘Where were you?’ and ‘What day is it?’ It’s really improving the science we can do.”

You don’t have to be a botanist to join iNaturalist. Participants can identify plants themselves, or they can just submit photos for AMC’s scientists to identify. You also don’t even need a smartphone, though it is easiest and recommended to record observations on a phone, rather than on a computer or tablet.

So far, iNaturalist has been successful in filling in gaps in data with more than 2,000 observations of the six target species submitted. AMC’s analysis, funded by the National Geographic Society grant, found that it is producing higher-quality data than before.

And as more hikers and outdoor users submit observations to iNaturalist, scientists like Murray will get a better idea of if and how climate change is affecting these plants, which are crucial to the alpine ecosystem.

“Many of these plants support other alpine species,” Murray says. “They are the foundation of the alpine zone community and beautiful. But watch your step, they are fragile too!”