How Philadelphia is Addressing Equity in Bike Sharing

Through its Indego initiative, the City of Philadelphia has worked hard to correct inequality and inaccessibility to bike sharing among communities of color.

To reduce the greenhouse gas emissions that cause climate change, many individuals and organizations, including AMC, have advocated for alternative methods of transportation—including bicycling.

Many cities across the country have implemented bike sharing programs, which allow residents to borrow bikes from public stations near them for short periods of time. But as cities implement these types of strategies to encourage biking, some have asked who these programs are really for. Several studieshave shown that user of bike share programs across the country are disproportionately used by white and higher-income residents.

In Philadelphia, however, racial and socioeconomic access and equity have been central in its Indego bike share program since it launched in 2015. As a founding partner of the Better Bike Share Partnership (BBSP), along with the nonprofit PeopleForBikes and the National Association of City Transportation Officials, Philadelphia’s goal has been to address issues of access, especially for low-income communities and black, indigenous, and people of color (BIPOC).

“We knew that if we wanted to have a bike share program that was really reflective of Philadelphia and its residents, then we had to have equity at the forefront of the program,” says Waffiyyah Murray, BBSP program manager for the City of Philadelphia.

To remove the cost barrier to bike sharing in Philadelphia, Indego offers a discounted $5 per month (or $48 per year) pass for residents with a Pennsylvania ACCESS Card, the EBT card for city residents. Indego’s full membership rate is $17 per month, or $156 per year. For the roughly half of Indego riders who have an annual income of $35,000 or less, the discounted rate makes a significant difference, Murray says.

In an effort to ensure equitable access across Philadelphia, city officials solicited input from different neighborhoods about if they wanted Indego bike stations and where they should be located. Indego also decided to offer a cash payment option for users worried about paying with credit or debit cards online.

Working with the Bicycle Coalition of Greater Philadelphia, Indego and BBSP have also offered education classes focused on safety—everything from learning to how to ride a bike to community rides that show residents how bike share might help them commute to a job or more easily complete their daily chores. And a conscious effort to reflect diversity in Indego’s marketing materials is showing more residents that bike sharing is for them, Murray says. 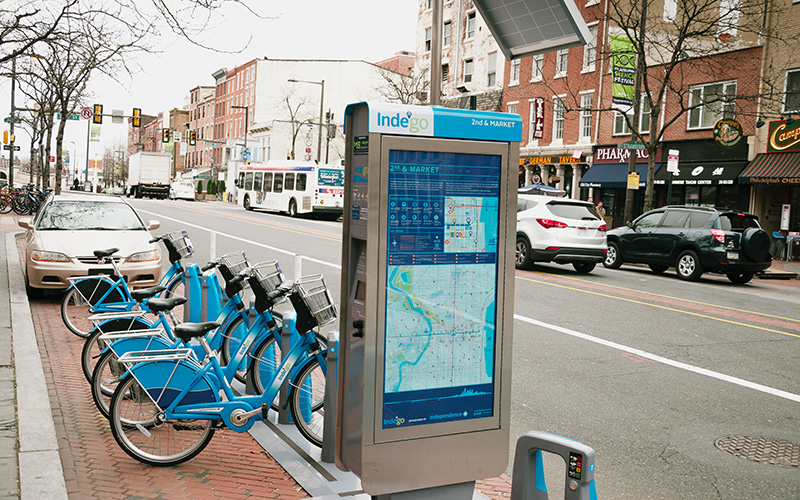 COURTESY OF INDEGOThe magic of bike sharing is the placement of stations near where people live.

But to arrive at those solutions, city officials had to first engage the community. That’s why BBSP’s work in Philadelphia actually started in 2014, a year before the launch of Indego.

“Sometimes you will see [organizations] will launch a project, and then try to get feedback after,” Murray says. “But a part of a community engagement is really about relationship-building and building up that trust.”

Building trust with various communities took time in some cases. “Especially in the first year, some neighborhoods said, ‘We aren’t really sure about Indego; we’re going to pass,’” Murray says.

De’Wayne Drummond knows first-hand the importance of this kind of community engagement. As the president of the Mantua Civic Association in his neighborhood of Mantua in West Philadelphia and parent engagement assistant for the city’s school district, Drummond’s experience in community engagement led to him taking on the role of community ambassador for Indego during its first years.

“When this opportunity came, I started riding bikes a little bit more and using the bike share program,” Drummond says. He wasn’t an avid cyclist at that point, but he liked the community aspect of biking and saw the opportunity for the initiative to open up important conversations between residents and the city.

“I think it started a much-needed conversation—there’s a bigger picture other than the bikes,” Drummond says. “You can’t just slap a Band-Aid over this conversation of equity.”

For example, Drummond says the relationships built through Indego and BBSP have allowed residents to raise concerns about dangerous areas for cyclists along busy 34th Street, which goes through Mantua. And conversations about transportation equity have also tied in with conversations about the city’s other initiatives health and wellness, he says. 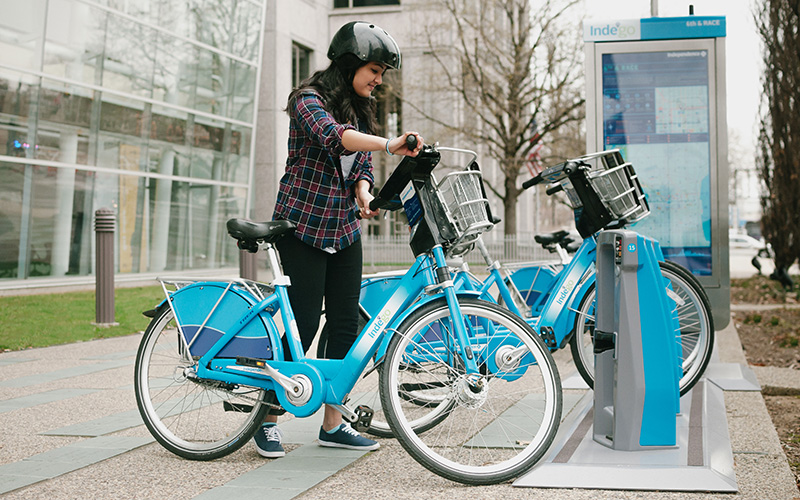 COURTESY OF INDEGORoughly half of all Indego passholders are Black, Indigenous, and people of color (BIPOC).

Both Murray and Drummond say they consider Indego a success in terms of addressing equity. As of April 2020, 14 percent of riders used the discounted ACCESS pass and roughly half of all passholders were BIPOC. And every year Indego has held dozens of educational programs and group rides, many for bilingual participants.

As part of its participation in BBSP, Philadelphia is also a “living lab” that will share lessons learned and successes with other cities.

“We want to make an impact around equity and bike sharing not just locally, but also nationally,” Murray says.

Chicago, Detroit, Portland, and Cincinnati will now also function as living labs with their own bike share systems as part of BBSP’s latest grant funding from the JPB Foundation in 2020. Each city will receive $200,000, and the hope is that by collaborating, these cities will continue to find new ways to make bike sharing more equitable for all.