A Way Outdoors: Thoughts on Race, Loving Nature, and Hiking to the Highest Point in Every State 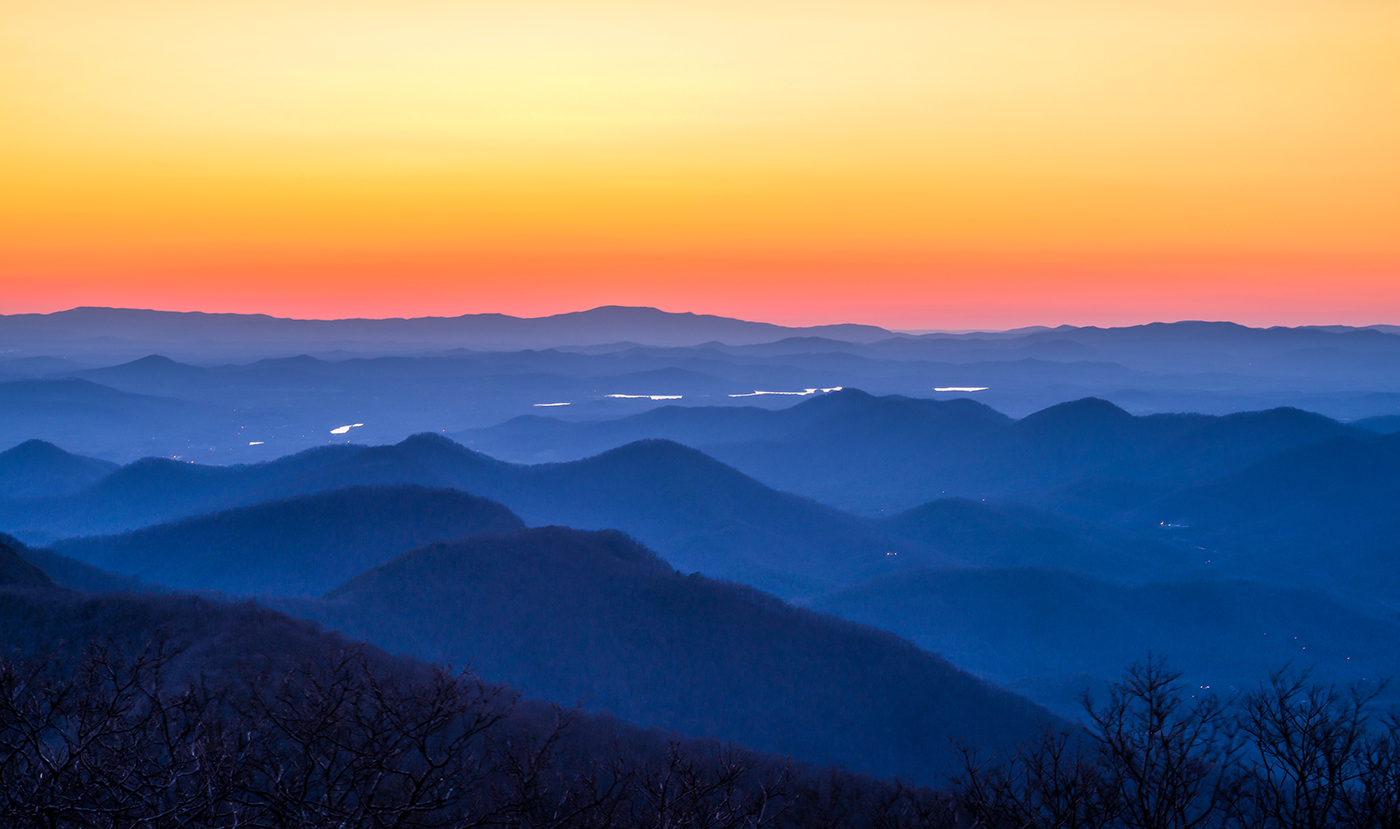 ANISH PATEL / CREATIVE COMMONS BY FLICKRThe view from the summit of Georgia’s Brasstown Bald—the state’s highest point—and the first peak the author tackled in her goal of hiking to the highest point in every state.

My earliest memories of the outdoors were of the dense forests that encroached upon my grandparents’ home in Ilesa, Nigeria. I watched torrents of rain obscure the leafy dimensions of the forest. Precipitation of the day would mist at the floor of the jungle, creating a billowing white carpet for my capricious dreams and nightmares to run wild. The outdoors of my infancy were as ancestral as they were supernatural.

Once my family moved to the United States, the outdoors morphed into the southern Georgia lowlands. We lived near a peanut farm that served as a late-night auditorium for summer cicadas. The insects’ unified hisses were as soft and sharp as the pine needles that covered the half-hardwood, half-pine forests. The outdoors were the Appalachian foothills of Amicalola Falls, the sticky humidity of Sapelo Sound, and the swarms of mosquitoes at Lake Lanier. It was smelling the citrus fragrances of magnolia blossoms and scavenging pecans with my best friends from elementary school. As Africans, my parents never understood my obsession with the outdoors and feared for what it meant for my safety. Peppered with Confederate flags and “No Trespassing” signs, the outdoors wasn’t meant for young Black girls like me. The outdoors could eat you whole and spit you out until your soul germinated into strange fruit. Danger lurked outdoors. 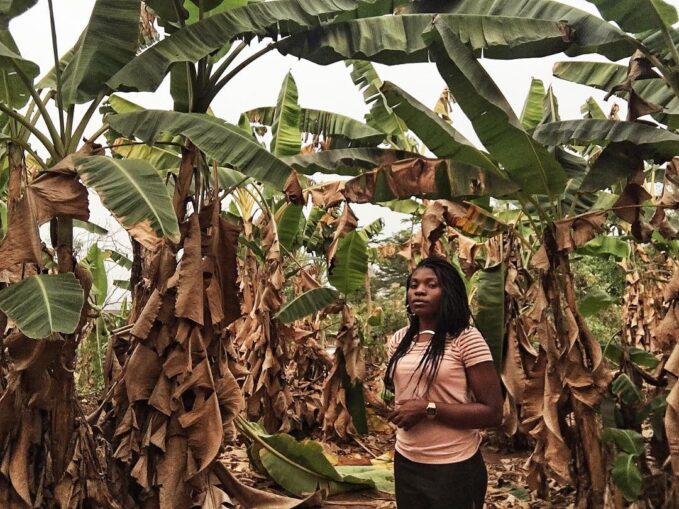 COURTESY OF DALI ADEKUNLEThe author in the forest near her grandparents’ home in Nigeria.

“We worked so hard to leave the bush,” they’d tell me, “and here you go chasing it!” They were right, and I understood their apprehension. As beautiful as my grandfather’s Nigerian forests were, they were also sites of survival. My grandfather, who turned 100 years old this year, once told me how, in the 1880s, his father’s brother was dragged into the obscurity of the bush by a group of white men to be enslaved. For my father, the outdoors represented exploitation. As a child, my father had witnessed Nigeria’s ascension as Africa’s largest crude oil producer. For him, the outdoors meant grueling labor for Exxon, British Petroleum, and Shell. Indoors meant a scholastic education.

In a colonized world where the beauty of your land is reduced to an imperialist playground, the joys of the outdoors are robbed from you. When your labor is inextricably tied to the land and it would be 1964 before legislation allows Black communities entrance into U.S. national and state parks, the joys of the outdoors are withheld from you. But a vestige remains. I see traces of that joy in the way my mother takes evening strolls to breathe deeply her night-blooming gardenia augustas, and the way my father’s daily jogs around a local pond have a religious quality to them—as if he were venerating the morning dew before it disappeared in the heat of the Georgia sun.

As I grew into adulthood, I realized that my own vestigial love of the outdoors was merely awaiting activation. Although I only had running shoes and rudimentary hiking gear, I hiked Georgia’s Tallulah Gorge State Park Trail, Lake Conasauga Grassy Mountain Trail, Mount Yonah Trail, Blood Mountain Trail, and Sawnee Mountain Trail in 2016. Slowly, the mistrust of the outdoors that was instilled in me metamorphosed into self-assurance. In the summer of 2017, while completing the Bear Mountain Trail near Waleska, Ga., my younger brother issued me a challenge: “Why not go as high as you can?”

My brother didn’t know the weight of his words and how they sat on my conscience. A life full of racist, xenophobic, sexist, and social-economic limitations had bruised me and the bruises had conditioned me to hide parts of myself. Those parts felt less hidden in the wilderness. Under the snowcaps of the Peruvian Salkantay pass and the Swiss Alps years earlier, I couldn’t hide my breathless heaves as my diaphragm struggled to oxygenate my lungs. The wilderness forced me to bear myself and to be honest with the pain and trauma that I had endured. My brother’s words had awakened a passion, and my impetuousness got the best of me. I decided in 2017 that I wanted to hike the 50 highest peaks in the United States.

In the summer of 2017, ever by my side, my brother and I began my mission by hiking Brasstown Bald, the highest point in Georgia. Nestled in the Blue Ridge Mountains with an elevation of 4,785 feet, Brasstown Bald didn’t pose much of a challenge for us. However, the ease of the hike didn’t diminish the summit’s breathtaking, 360-degree views into Tennessee, South Carolina, and North Carolina. As we sat in the stillness of the balmy July air, we were acutely aware that we were the only Black visitors that day—but we didn’t care. We had gone as high up as we could, and the sweat beading on our brows meant that the view belonged to us just as much as anyone else. 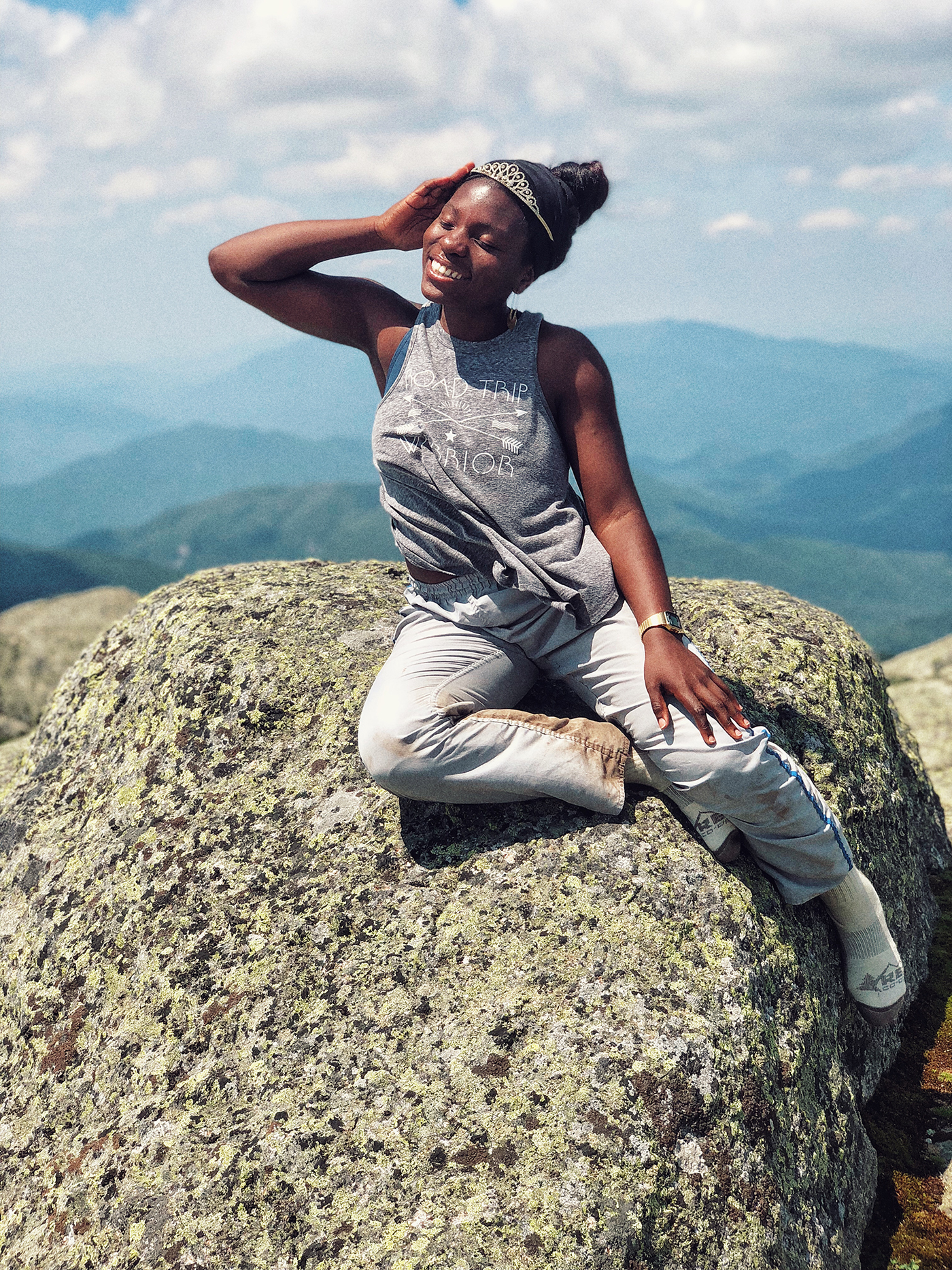 COURTESY OF DALI ADEKUNLEThe author at the summit of Mount Marcy, the highest point in New York State, donning a tiara in celebration of her birthday.

The following summer, I set my eyes on Mount Marcy, which at 5,343 feet, is the highest point in the state of New York. Again, my ascent took place in July, and although I hadn’t intended it to, the ascent highlighted yet another life transformation: my birthday. On July 4th weekend of 2018, my boyfriend and I drove seven hours from Brooklyn—my home since 2015—to Lake Placid to pay our respects to the mountain originally known as Tahawus, or “cloud-splitter” in the Algonquin language. I was astounded by the topographical diversity and beauty of the hike. The 15-mile loop begins in lush Adirondack evergreens, entwines with Marcy Dam, before ending in a rigorous rock scramble that can leave toes and fingertips sore. At the summit, I pulled out my birthday tiara in celebration. Despite a year of losing friendships, jobs, and struggling academically, I had gone as high as I could outdoors, and I was going to savor the sun.

In the subsequent summers, I hiked Mount Frissell, the slick and woody peak of Connecticut, and misty Mount Greylock, the highest point in Massachusetts. This summer, I set my sights on Vermont’s Mount Mansfield. But the hike held special significance. On the trail, my boyfriend and I met amateur and expert hikers from all over the United States. The common refrain was gratitude for surviving a global pandemic and being able to enjoy the outdoors after a year of fear. What surprised me most was the diversity of faces, body shapes, hiking gear, and lived experiences at the summit. All the hikers were chatty; the yearning for connection twinkled in every eye. With my tiara tightly secured—it’s now my celebratory headwear at every summit—I gloated about my dream of hiking every peak of the 50 states, and I was met with overwhelming positivity.

In the United States, the outdoors remains deeply inaccessible to many Black and brown people, immigrant people, and poor people. I recognize that my socioeconomic privilege has given me access in ways that others who look like me do not possess. For instance, I have a means of employment that grants me vacation days; I have the disposable income to purchase quality hiking gear and travel; and I have found a community of individuals who share the same interest and who are willing to accompany me on my journeys. I am an anomaly, but I shouldn’t be. The outdoors has always had a history in the lives of people of color, but it is now our turn to reclaim all that was lost and distorted—to rewrite what nature represents for our futures.

Dalí Adekunle is currently a public health director in Brooklyn. She was raised in a multilingual and multicultural household and speaks Spanish, Yoruba, Portuguese, and English fluently. In addition to being an avid hiker and writer, she loves to explore cinematic depictions of public health and as it pertains to people of color.