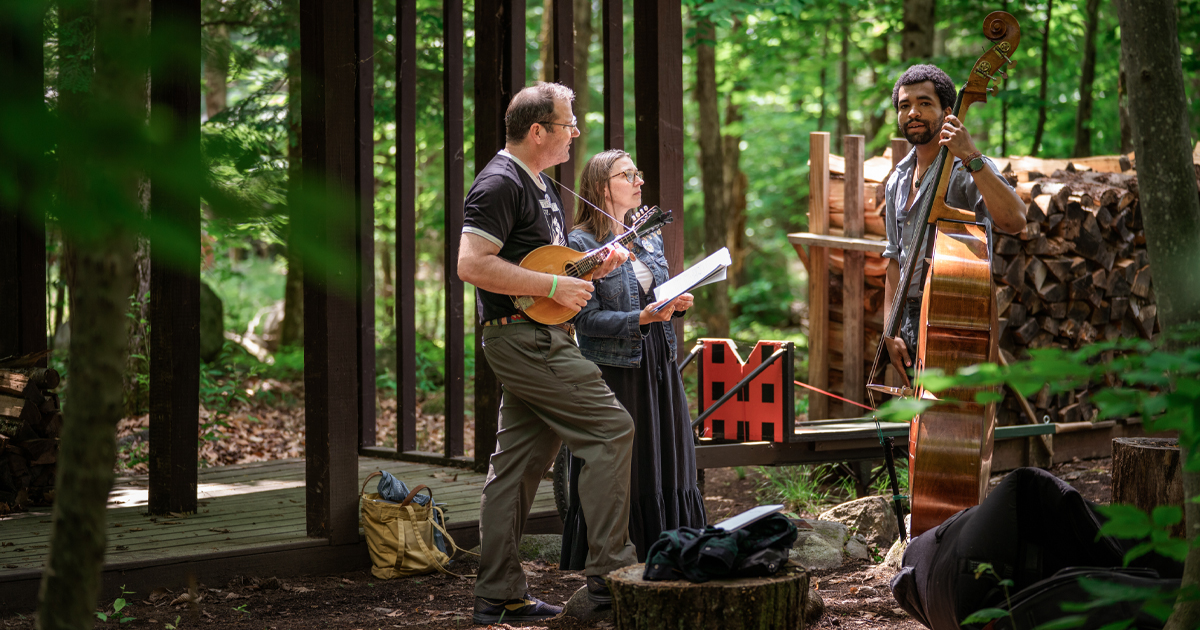 Amanda KowalskiCollaboration and jamming, especially outdoors, is a large part of the creative process at Miles of Music Island Camp.

You hear it before you see it… once the boat’s motor stops.

In the recreation hall, a group sits in a semi-circle of folding chairs, working through a folk standard on an array of guitars, mandolins, and banjos. After a few chord progressions, they pause and run it back. Behind them, people sunbathe on a wooden dock, play with children, and dive into the waters of Lake Winnipesaukee. Above, there’s barely a cloud in the sky.

Welcome to Miles of Music Island Camp, a retreat for musicians on AMC’s Three Mile Island in New Hampshire.

Over the course of a week, campers, ranging from touring musicians with millions of Spotify streams to enthusiastic hobbyists, take courses and hop in and out of loose jam sessions. At “Band in a Box” workshops, campers bring their original compositions to an experienced house band, who flesh out each song and record the finished product. Each night, campers and staff gather for line dancing, karaoke, sing alongs, and all sorts of (wholesome) hijinks.

The camp is the result of a unique partnership between AMC and the Miles of Music organization. It’s a relationship that’s not only built on shared values, but the lasting friendship between camp founders Kristin Andreassen and Laura Cortese and Three Mile Island off-season manager Dinty Child. Along the way, they’ve brought musicians from around the world to the woods of New Hampshire and wrestled with an age-old question: How do you balance preserving tradition with welcoming new people and perspectives?

More than a decade since the camp’s founding, it’s an unfinished process. And that’s by design.

Dinty Child is a Three Mile Island, and Appalachian Mountain Club, lifer. His father was AMC President in the 1960s and growing up Child spent his summers vacationing on the island, before eventually working crew as a teenager. As an adult, Child brought his daughters here and has served as off-season manager for 16 years. During Miles of Music Island Camp, between boat rides to the mainland and maintenance jobs, Child stops to play with his young grandchildren, who are already getting their first memories in the outdoors.

He’s also an experienced musician, who’s spent years cutting his teeth in Boston-area roots and folk bands. It’s through this scene that Child became friends with Andreassen and Cortese. In the early 2000s, the three began playing shows with some of their other friends in a loose group of musicians called Subrosa. Andreassen and Cortese, both of whom had grown up attending music camps, were also toying with the idea of organizing a camp of their own.

In 2009, Child was awarded a small grant to bring Subrosa up to Three Mile Island for a musician’s retreat. While Andreassen and Cortese took separate boats over that first day, they each knew they’d found a home for their camp.

“We’re psyched to be here with 13 friends for a retreat, but this is a place for a music camp. We stepped off separately and just had the exact same thought,” says Cortese.

After securing an agreement with AMC’s Three Mile Island Committee, the pair started with a group of 60 musicians the following summer. They’ve slowly built up to 120 campers and staff, close to the island’s limit. While hosting a camp on a remote island brings unique logistical challenges, the community has largely embraced these limitations as a part of its culture. Rather than fret over the limited cell phone service, for example, the campers and staff are encouraged to simply keep technology out of sight.

“If you need to do something related to communicating with the outside world for this week, do it in your cabin. We totally understand that we live in a modern world, and that’s necessary. But when you’re in the public spaces, we want you to be present. We want you to be here,” says Cortese.

Campers and staff are also encouraged to spend time in nature, explore Three Mile Island’s trail system, and paddle or swim in Lake Winnipesaukee. It’s unsurprising that the wooded trails and lakeside lookouts of Three Mile Island have found their way into the lyrics of several original songs written by campers.

“A lot of the magic is inherent in the in the ethos of the island,” says Cortese. 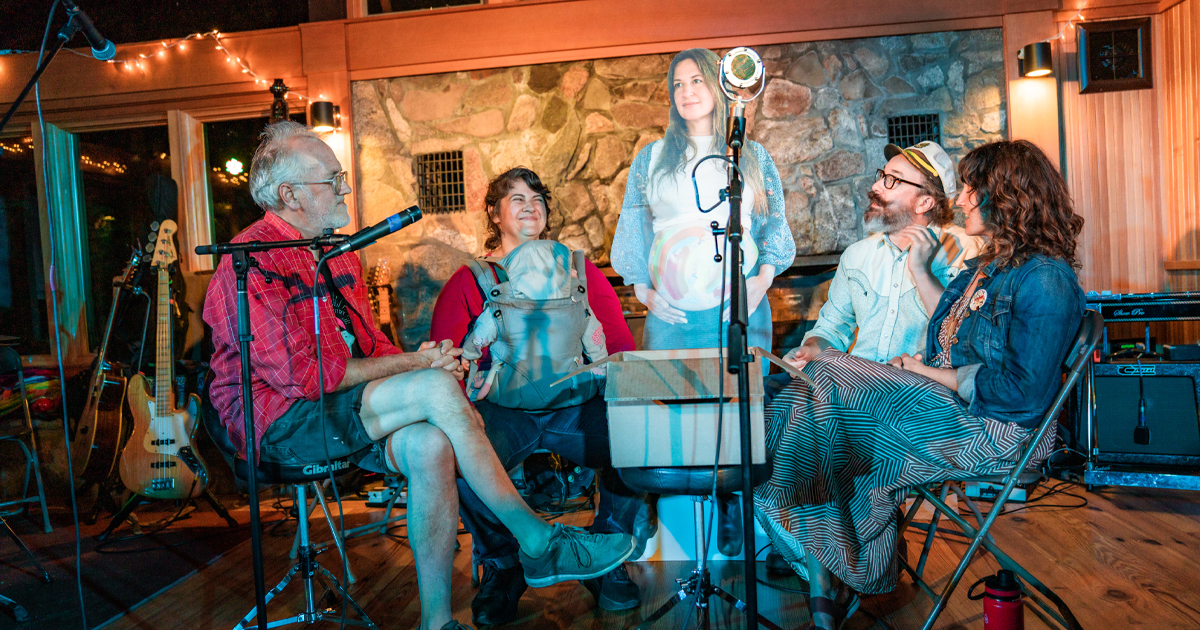 Days at Island Camp move at a relaxed pace, but there are plenty of opportunities to keep busy. After morning sessions and a family-style lunch, a group of campers gather in the main lodge for a small performance and group sing-along. Then it’s off to afternoon workshops. Some instructors sit in as students. An experienced bassist heads to a class on drumming, something he’s never done before. It’s a loose and casual vibe. But much about this camp, from the musicians in attendance to the opportunity for musical experimentation, is highly considered.

From the beginning, Andreassen and Cortese intended for Miles of Music to offer a different experience than the typical music camp. According to Cortese, most camps were focused on either original songwriting or playing a repertoire of traditional folk standards (trad music for short). As original songwriters with history in the trad community, the pair felt there should be a space for musicians to close the gap and experiment outside their comfort zones.

“[The camp] immediately took shape and started to work where songwriters would say, ‘You know I’ve always liked country or Americana music, but I didn’t really know anything about this old-time tradition and that influence of that genre.’ And vice versa. An instrumentalist who’s only been part of a repertoire tradition being like ‘actually what happens if I create something new?’” said Cortese.

Since then, Miles of Music’s effort to foster an inclusive community has expanded beyond just bringing players from different musical traditions. The camp now actively recruits campers and instructors from a variety of racial, gender, sexual identity, and socio-economic backgrounds. Tuition is based on a tiered system, where campers can choose between multiple rates, depending on what they’re able to pay. There’s also a work/trade discount rate and a small number of merit and community discounts, including for working musicians, musicians of color, and musicians of Wabanaki descent.

“[We’re] really trying to be as intentional as possible about who is making this music, who would want to be here. What kind of safe space it needs to be, and how can we foster that safe space for the widest variety of people that would want to come here. It’s a constant thing in progress, and we’re by no means there yet,” says Cortese.

Some of the decisions leadership has made are more difficult than others. Camp admission used to be on a first-come, first-served basis, a process that made it easier for musicians who were already familiar with the camp to return year after year. While building community with familiar faces was important, the camp shifted to picking most spots through a lottery and setting a certain number aside for first-year attendees.

“[Leadership] has really said, ‘we love you, you’re a friend, but you can’t come because we need to create space for someone who’s new,’” says Caroline Campbell McCormick, a camper who’s used her professional experience in nonprofit development and management to help Miles of Music create a mission statement and set of community values.

In recent years, the community values document has become a fixture of the camp experience. During orientation, campers break into groups to have open discussions about the guidelines and ask questions. Through this process, community standards can shift from year to year to best meet the needs of campers. 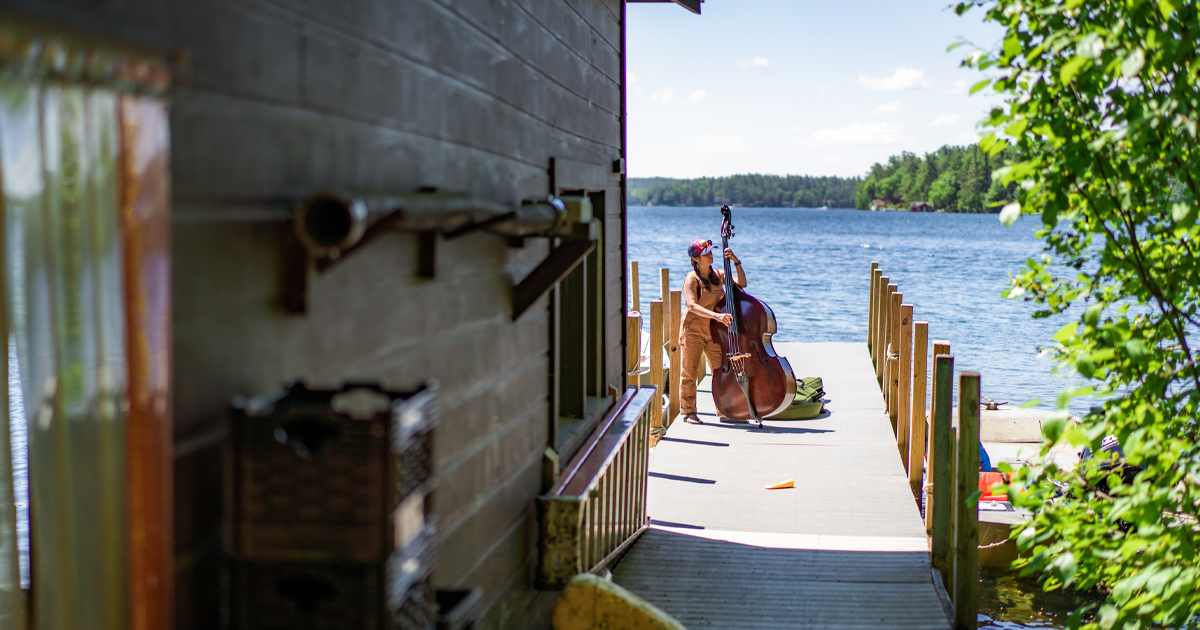 Amanda KowalskiA Miles of Music camper practices the upright bass along the waters of Lake Winnipesaukee.

By bringing a diverse group of musicians to Three Mile Island, the Miles of Music Camp is also introducing a new audience to the outdoors and outdoor recreation.

“There’s quite a few people here who come from New York and Boston, more confined spaces. And you get here, and everything opens up,” says Child.

“Miles of Music has done a great job of introducing this facility to people who would never have found out about it otherwise,” says Lienhard.

The balance of tradition and openness defines much of the Miles of Music experience. The balance between original songwriting and repertoire playing. Between building community over the years with the same group of musicians and new voices. Between campers that already love the outdoors and campers for whom a week in a cabin on a forested island is a week of firsts.

Child knows this balance well. His family has been coming to Three Mile Island for decades and he believes the way the island brings generations together is one of its greatest assets. But he’s also making space for new faces. Bridging the gap between the creative types he jams with and the outdoor community he works with is one of the things that brings him joy during Island Camp.

We’re sitting on the back porch of the AMC Three Mile Island dining hall. The sun has begun its descent into golden hour light. A string group plays on the benches behind us while a few of Child’s grandchildren run around nearby.

“I get to introduce a whole bunch of new people to this place and know how much it means to them.” 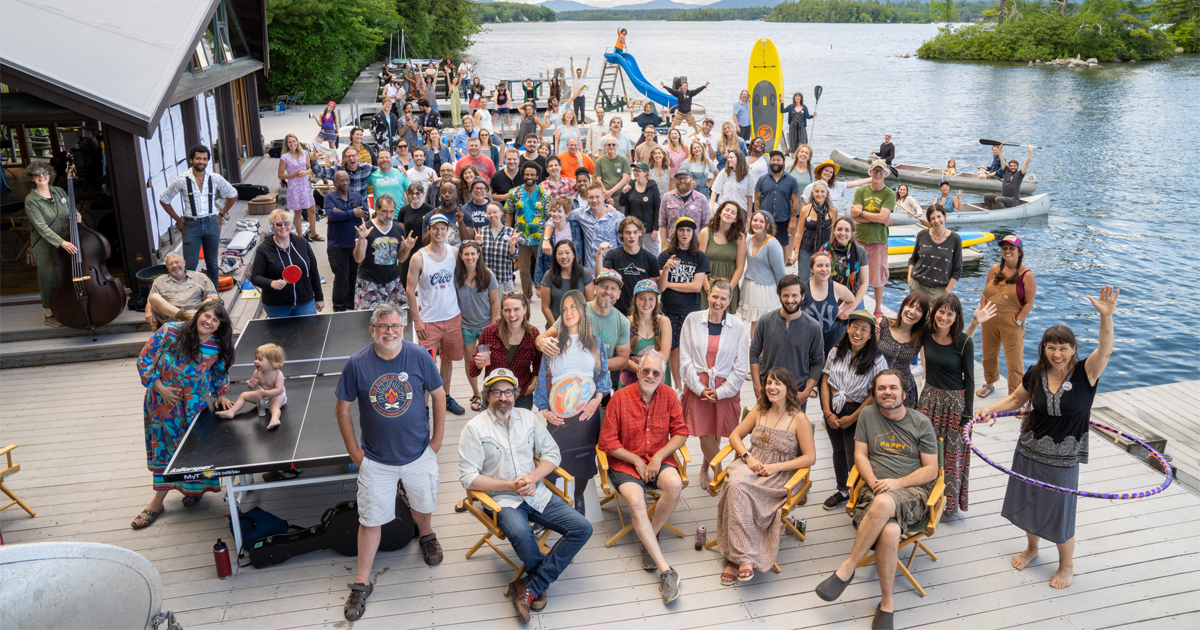 Amanda KowalskiCamp attendance has grown over the years, from 60 to about 120.