How to Stuff a Sleeping Bag: Three Simple Tips

There are three simple things you can do to stuff a sleeping bag with minimal effort and hassle, as well as squash it down to the smallest possible size. First, stuff it tail first. Second, turn it inside out. Third, use a compression stuff sack. Here are the details on these simple, but extremely effective, techniques. 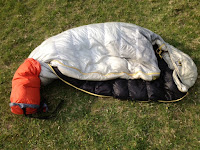 Stuff It by the Tail
The most common mistake people make when stuffing a sleeping bag is to cram it in hood-first, leaving the tail end (where your feet go) wagging out there until the very end. The problem is that the foot box of a sleeping bag is an enclosed space, which means that it usually turns into an air-filled balloon if it’s the last thing going into the stuff sack. Hassle and inconvenience ensue as you spend time slowly forcing air out through the fabric and insulation. If, on the other hand, you start with the tail (as pictured here), all that air readily escapes, leaving you with the open and easy-to-stuff hood at the end.

Turn It Inside Out
This second technique is generally applicable only to certain types of sleeping bags, namely styles that include an extra layer of wind- and water-resistant fabric on the surface (a common feature on winter sleeping bags). This feature can be great for blocking air flow from the outside, but it does a great job at keeping air on the inside as well. Stuffing a bag like this can be a maddening exercise in balloon deflation, even if you start with the tail. The solution is to turn the bag inside out, which positions the wind-resistant fabric as the innermost layer of the bag—and makes stuffing it a snap. 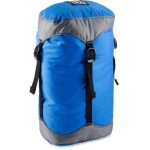 Use a Compression Stuff Sack
In general, it’s nice to squish your sleeping bag down to its smallest possible size. This can require considerable effort if you’re cramming the bag into a standard, just-barely-big-enough stuff sack. Compression stuff sacks, in contrast, feature a series of straps that connect the two ends of the stuff sack, usually via a separate lid that you place over the cinched end (as pictured here). Once the bag has been stuffed, you simply position the lid and crank down the straps to squash the bag to minimal size.

The other major bonus of compression stuff sacks is that you can buy one with ample room for easily stuffing the sleeping bag before compressing it, which can save considerable effort. Just make sure that it’s not so roomy that you can’t maximally compress it—if you can cinch the straps all the way down, it’s too big.

Learn more about sleeping bags from these recent posts: