Pack Heat, Not Weight: Pros and Cons of Alcohol Stoves 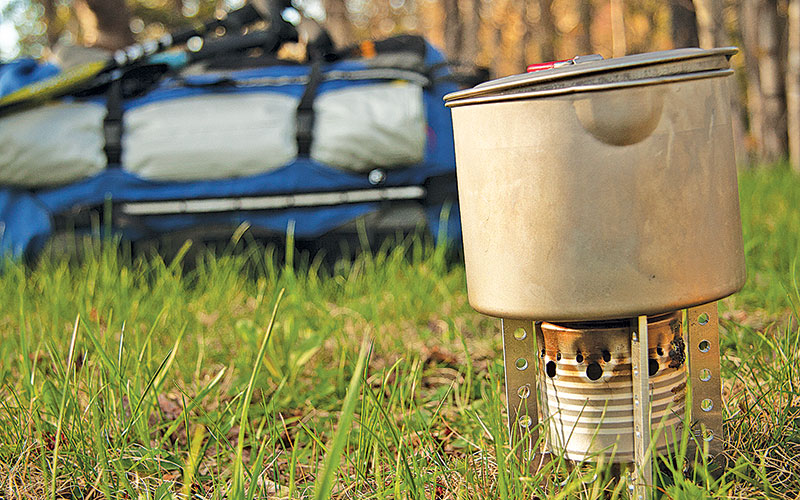 Ryan SmithAn alcohol stove is a lightweight option for those looking to shave ounces off their pack weight.

Interested in a stove that weighs less than 3 ounces, burns in blissful silence, features no complicated moving parts, and uses a low-cost and widely available fuel? Plus is inexpensive, durable, and ultra-simple to use? Meet the alcohol stove, a featherweight cooker that can instantly shave a pound or more off your packweight. Its unique design smokes the competition in many ways—just be prepared to make a few sacrifices if you want a cook system that weighs less than a gulp of water.

The Heavyweights
First let’s review the chunky contenders: white gas and canister stoves. White gas stoves feature a burner and separate pump (8 to 16 ounces combined), plus a requisite fuel bottle (3 to 7 ounces empty, depending on size). They are bulky, noisy, pricey ($75 to $125), and require pumping, priming, and some regular care and maintenance. Canister stoves burn a pressurized propane/butane mix from a metal cartridge. The burner itself may be very lightweight (as little as 3 ounces) and inexpensive ($25 to $50), but the canisters are relatively heavy (4 to 6 ounces empty), costly ($5 to $10), and difficult to recycle. Both stove types do have their distinct advantages, of course, notably rapid boil times.

The Featherweight
Compared to the competition, alcohol stoves represent the ultimate in simplicity and lightness. Pour an appropriate alcohol fuel into the burner, light it, and within seconds you’ll be cooking over a silent flame. When it comes to heft and cost, these stoves dominate the field. A wide range of styles are available that weigh less than 3 ounces. Some fall below 2 ounces, and the very lightest hover around only a single ounce. You can build one yourself for minimal expense or purchase a manufactured model for $20 to $40.

Cook Light, Boil Slow
Patience is a virtue when it comes to cooking with an alcohol stove. Alcohol fuel contains approximately half the energy by weight of white gas or butane/propane. As a result, the heat output is proportionately less—and cook times are a lot longer. Most white gas and canister stoves can boil a pint of water in under three minutes. Alcohol stoves generally take at least twice as long, about six to eight minutes in good conditions. They are also much more sensitive to wind; a windscreen is essential for even the lightest breeze. Some models have an integrated windscreen around the burner, a nice feature that helps fully capture available heat.

Fuel for the Fire
A variety of widely available fuels work in alcohol stoves; clean-burning denatured alcohol and methanol are the most common ($4 to $10 per pint). Most alcohol stoves won’t hold fuel during transit, however. If fuel remains after cooking, you must either burn it off or pour it back into its container—a potentially tricky operation. If the stove goes dry, you must wait for it to cool before adding more fuel. Gauging the right amount for your needs requires experience and practice. Most alcohol stoves also have only one flame setting. This is fine for bringing water to a boil, but suboptimal for gourmets looking to simmer their meal. Compared to highly flammable white gas, alcohol fuel is significantly less hazardous to carry. (Many hikers store it in small plastic bottles to minimize weight.) Its primary risk is a nearly invisible flame, which creates an increased potential for burns. Note that alcohol stoves perform poorly in subfreezing temperatures and are not recommended for winter trips.

Species and Locations
More than 20 commercially-produced alcohol stoves exist, but don’t expect to see them in your local outdoor gear shop—most are manufactured by tiny companies or by individuals and can be found only online. Alternatively, you can make your own. Plans are widely available online for converting aluminum cans, Altoids tins, and other common products into your next ultralight cooking companion.