I hate deer ticks. Potential transmitters of Lyme disease, they are the animal bane of my New England outdoor existence. And May through July represents the height of the tick threat. Why? It’s peak time for near-microscopic deer tick nymphs. About the size of a poppy seed (1 to 1.5mm), their miniscule size makes them extremely difficult to detect, even after they attach to a host (like you, your dog, or your children).

The nymph form is the second stage of a deer tick’s three-stage, two-year lifecycle. Deer ticks hatch from eggs as larva in the summer. Once the larva obtains a blood meal from a host, it molts and becomes a nymph, usually in late summer/fall. After overwintering underground, nymphs emerge from May until late July. They, too, are after a blood meal so that they can transform into the larger (and more easily spotted) adult ticks. 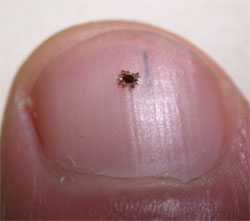 A deer tick nymph is the size of a poppy seed.

Unlike the larva, which are universally Lyme disease-free (they don’t hatch pre-infected), nymphs can become Lyme vectors if the larva attaches to a Lyme disease-bearing host (mice are a common culprit).

Because they are so hard to spot, infected nymphs cause the vast majority of Lyme disease cases in humans. In fact, a significant number of patients diagnosed with Lyme never saw the tick that bit them in the first place.

In highly infected areas of the northeast, as many as 25 percent of nymphs have been found to harbor Lyme disease. Keep in mind, however, that an infected tick must be attached for a minimum of 24 hours before it can transmit Lyme disease. All the more reason to be hyper-vigilant any time you venture into tick terrain, such as high grasses, thick leaf litter, and bushes. Employ tick repellents and other tick defenses as much as possible. And always check yourself (and your loved ones) thoroughly at the end of any day you’ve been in tick country.

If you do find a nymph attached, they are difficult to remove with anything other than tweezers; they’re too small for most specialized tick removal devices.

The bad news to all of this is that the risk of Lyme disease appears to be steadily increasing, especially in the Northeast, where it’s rampant. Check out this interactive year-by-year map of reported Lyme disease cases in the Northeast to see what I mean. It seems the price of Lyme-free outdoor freedom in much of the Northeast will continue to be eternal vigilance.