Ditch Your Gym and Join the Outdoor Fitness Craze 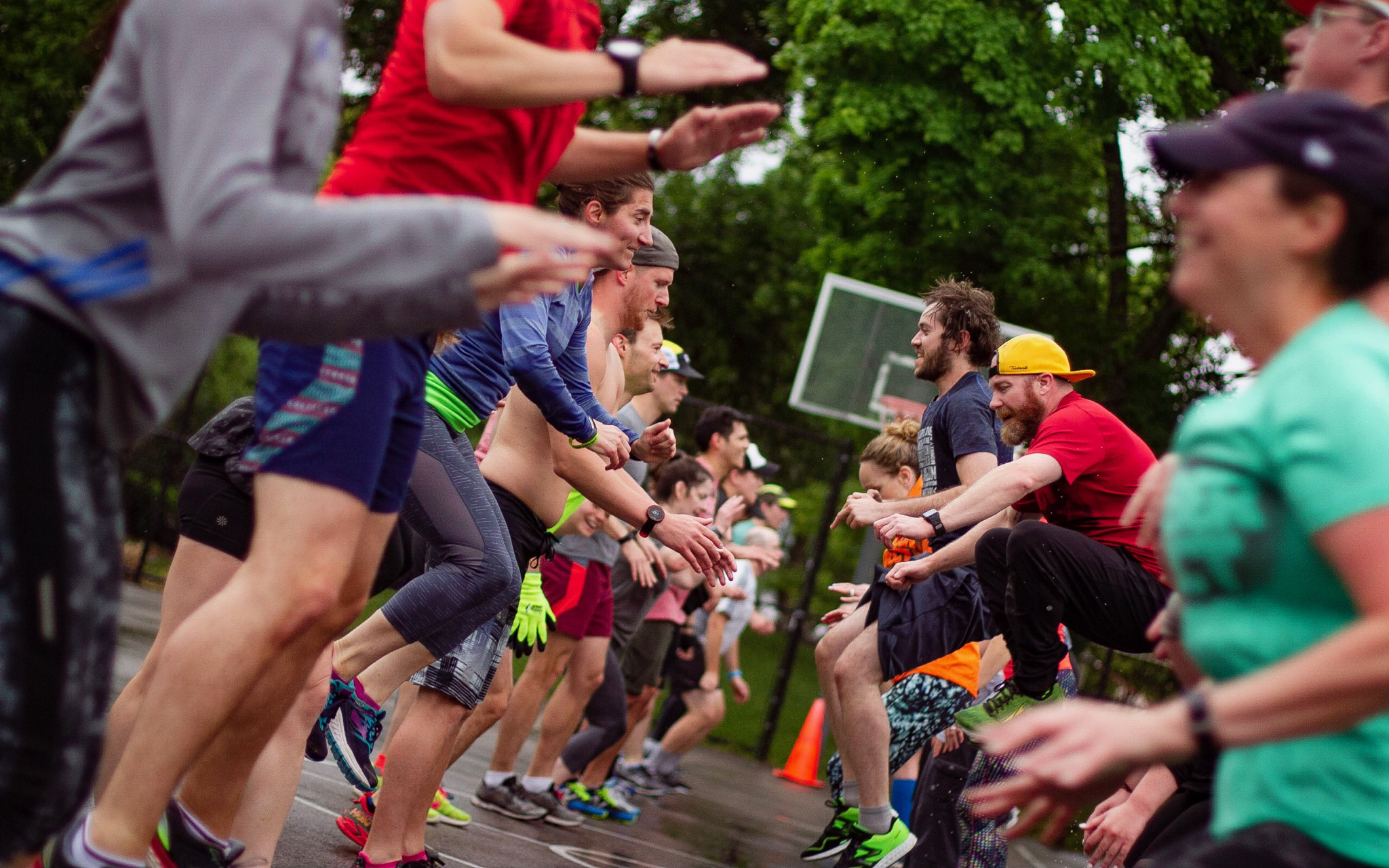 A fitness revolution is afoot, and it has nothing to do with the gym. Wellness aficionados around the world are spurning the pricey monthly memberships, terrible music, and iron-pumping meatheads filling so many gyms. Instead, more and more people are opting to join friends for fun outdoor fitness routines that capitalize on the natural and built environments of cities and forests.

I’m one of these folks. A lifelong runner, I helped launch an outdoor exercise group in my neighborhood 5 years ago, and, more recently, I’ve become a diehard member of AMC’s Boston headquarters running group. A handful of us staff ventures out a few times each week for a short jog and an outdoor core workout in a nearby playground. We like to think we’re making the natural choice: Emerging science suggests that outdoor fitness may even be better for us than hitting the gym, perhaps resulting in a more rigorous workout, cleaner air, and even increased happiness.

Are you convinced? For tips on how to join the outdoor fitness movement, look no further than one of its pioneers: Brogan Graham, who cofounded the November Project, a free outdoor workout group in Boston and Cambridge, Mass., that launched in 2011. Since then, the group has expanded to become a global nonprofit, running workouts in 49 cities (and counting) in North America, Scandinavia, Europe, and Asia. Before sunrise one to three times weekly, November Project members in their respective cities run to public locations, where enthusiastic volunteers lead participants in runs up stadium stairs, dips and box jumps at bus-stop benches and monuments, sprints through parks and along piers, and burpees—lots of burpees.

“There’s something that makes you feel connected, like a mammal, a true animal, about being outside,” Graham says. “It makes you feel like you’re more at one with the movements themselves: to get on a stair-stepper instead of climbing stairs, it’s almost the same movement. But to feel that wind, to feel the variation—wind direction, sun direction—I think it makes you feel much more alive.”

Whether you find your local November Project chapter or set out to organize a dads stroller-running group or a coworkers climbing club, follow these tips to launch your own outdoor workouts this spring and summer.

November Project launched when Graham and fellow rower Bojan Mandaric challenged each other to meet before dawn every weekday for one month for outdoor workouts. At the end of the 30 days, Graham says both men—“not morning people”—had developed a routine, due in no small part to the connection they shared as friends. At the crux of November Project’s success is the camaraderie participants feel when they show up—and the sense of feeling missed when they’re not there.

Graham’s and Mandaric’s goal wasn’t about outdoing one another—51 pushups instead of 50, for instance, or dropping a mile time by 15 seconds—but about consistency: exercising outside together every weekday for a month, no matter the weather. Graham says November Project has never canceled a workout in seven years in any of its 49 cities. Knowing the workout is always happening and that your group will be there shatters some of the barriers we build between ourselves and our fitness goals.

“I think, whether it’s November Project or showing up for yourself or starting your own run club or climbing group or anything, when you start something, really nail down the consistency,” Graham says. “It could be once a month, but once you say what it is, really see that through.”

A core tenet of outdoor exercise, Graham says, is functional fitness, which involves actions that strengthen and prepare the body for real-life activities. Many of these movements can be done anywhere, especially outdoors: hanging, swinging, picking up heavy options, lifting your body weight, rolling. Cities are full of monkey bars for pull-ups, walls for wall-sits, benches for dips and push-ups, and many other built elements to aid a workout. Forests feature many of the same elements, from low-hanging branches to dodge to boulders for squat-jumping.

You don’t need to be a fitness instructor or have a group of 450 friends to lead a challenging, all-levels outdoor workout. The best ones are the simplest, Graham says. He recommends the two below that can be done with one other person.

Exercise 1: Deck of Cards: Shuffle a deck of cards and put it face down. Turn over the top card. If the card is black, you’re doing push-ups. If it’s red, sit-ups. Two through ten equals that many pushups or situps. Jacks, 11; queens, 12; kings, 13; and aces, 14. Work through the deck, timing how long it takes you. But instead of going for a quick time, Graham encourages pursuing perfect form. For a push-up, that means keeping your elbows in, next to your ribcage, reaching a full extension at the top, and chest touching the ground at the bottom. You can do push-ups with your knees on the ground, as well—a modification November Project leaders call “tough-guy push-ups.”

Exercise 2: Door-to-Door: In this running workout, you can have a partner of a similar or a different fitness level to your own. Partner A runs to Partner B’s house. The two runners then run back to Partner A’s house. If Partner B is the faster runner, she can use Partner A’s quicker half as her warmup. Once the two runners reach Partner A’s house, Partner B turns around and runs her quick half back to her house. Graham says this simple workout is great for distances of any length, whether you live a mile from your partner or 10.

The majority of us probably don’t consider exercising fun. And most gyms do little to inject fun into their offerings, Graham says. November Project workouts regularly happen in little-known locations, requiring participants to explore parts of their cities with which they’re unfamiliar. Most sessions begin with hugs or high-fives, games of freeze tag to stretch out and warm up, and group cheers. Fun, Graham says, is what builds a lifestyle of fitness and creates community outdoors in the unlikeliest places. He’s even got the word tattooed, upside-down, on his thigh to remind himself daily of fun’s importance in fitness and life.

“This isn’t guesswork,” he says. “Four hundred and fifty people in minus-30 degrees in Edmonton playing freeze tag are my proof.”

How Being Outdoors Can Relieve Stress and Anxiety