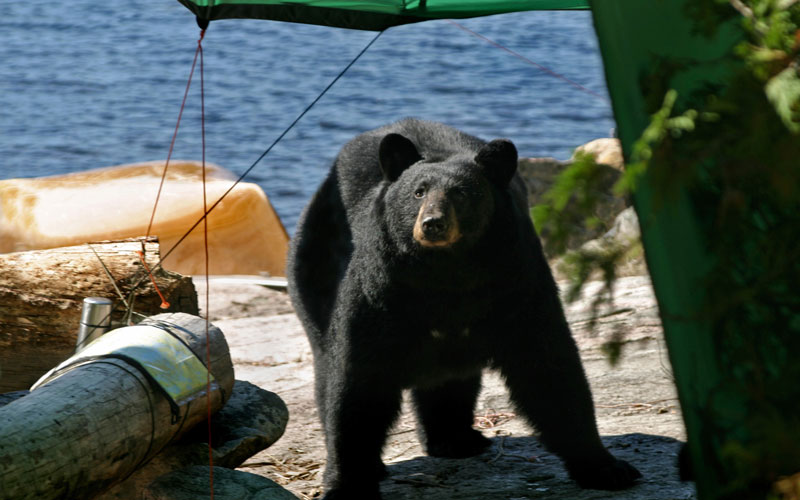 iStockBlack bears are no stranger to campsites, especially when food isn’t stored properly

The only interesting fact that I recall from high school physics is that black bears can run up to 30 mph. My teacher, an avid outdoorsman, included this detail in one of many stories told to engage a senior class focused on nothing but graduation.

I’ve since learned that the American black bear, which averages 150 to 250 pounds, can be found in the forested regions of nearly 40 states. It’s omnivorous and opportunistic, meaning it will eat anything from plants and insects to GORP and peanut butter sandwiches. And therein lies the problem—for both humans and bears.

In New Hampshire, the black bear population (5,000) averages about one bear per 2 square miles. In Pennsylvania, the population (14,000) has more than tripled in the last 40 years. Bears tend to avoid people, but it can be difficult for them to avoid footpaths and campsites within their home range, increasing opportunity for human-bear interactions.

Andrew Timmins, bear project leader for the New Hampshire Fish and Game Department, says that conflict management has become a significant part of his job. Conflicts arise from improper food storage, which bears learn to exploit. The more often they find a free meal, the more likely they will raid campsites or harass hikers. “These bears are not acting aggressively,” Timmins says. “They’re simply out there to get easy food.”

To discourage this in the backcountry means following several bear safety practices: maintaining a clean campsite, cooking and cleaning as far from your sleeping area as possible, and keeping your tent and sleeping bag free of any food-related or attractive odors. This includes toiletries like toothpaste, Timmins says.

“The bottom line is that food needs to be stored properly if there is any expectation for these conflicts to be mitigated,” he adds. The alternative creates a small number of bears that become increasingly bold and at risk of being killed by state officials as a result of chronic nuisance behavior.

The standard rule of thumb in the backcountry has been to hang your food in a tree: at least 10 feet off the ground and 5 feet from the trunk on a branch that cannot support a bear’s weight. That means bringing a rope or cord to string up your pack or food bag. Good advice, especially in the absence of other options, but this method has begun to fail with more frequency.

“Bears are starting to get the hang of the hang,” Timmins says. “It seems like food lockers and food canisters are now the way to go.” In New York’s Adirondacks, bear-resistant canisters are required in the Eastern High Peaks Zone. In northern Georgia’s Chatahoochee National Forest, a new springtime canister requirement for overnight campers along the Appalachian Trail has already triggered a reduction in the number of conflicts.

The thick-plastic, odortrapping canisters vary in size, weighing 1.5 to 4 pounds. Smooth-bodied with locks that may require a coin or screwdriver to open, these containers will foil almost any bear and are nearly indestructible. Store them at least 100 feet from your campsite, in a shallow depression, or between rocks or logs.

If you do come across a bear in the woods, Timmins says it’s normal for the animal to be huffing or swatting the ground: “That’s what bears do amongst themselves to avoid serious confrontations. It’s designed to make opponents back away.”

If the bear hasn’t seen you yet, make noise to alert it to your presence. Keep your distance, talk to the bear in a calm voice, and slowly back away. Do not turn your back or run. A majority of bears will ignore you and move on. If a bear remains interested, Timmins says “defending your pack and letting that bear know that no means no” can be more effective than handing over your sandwich, which reinforces bad behavior. “It is important to recognize that the bears we see following and approaching hikers are not acting in an aggressive manner, they are essentially begging.”

Try making loud noises and throw rocks or sticks toward the bear, but only if you feel safe doing so, Timmins advises. It can be enough to startle the bear and force a retreat—probably not at a speed of 30 mph but enough to re-establish a proper boundary.

Backpackers camping off-trail in the White Mountain National Forest (WMNF) are encouraged to carry a bear canister. Free canisters are available on loan from WMNF ranger stations (call 603-536-6100 for details). All AMC-managed backcountry sites in the WMNF have bear-proof food storage.