A Natural and Social History of Cairn Building and Maintenance 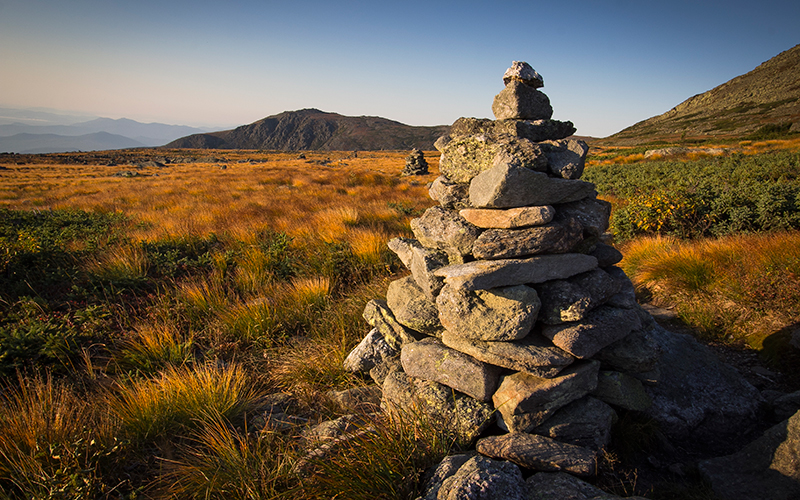 I leaned into the wind and pushed toward the dark shape materializing in the fog, squinting to keep my eyes free from blowing snow. Tears streamed across my cheeks, and my beard froze. Ice-coated stones stacked to eye level slowly came into focus. Then another blurry silhouette appeared in the distance. Reassured by their presence, I worked my way across the Northern Presidentials cairn by cairn.

As a caretaker at AMC’s Zealand Falls Hut I was tasked with inspecting the high huts during winter. On this trip, my companion and I visited Lakes of the Clouds and Madison Spring huts. Under crisp morning skies, we scrambled up the Ammonoosuc Ravine, then followed crusted tracks on the Crawford Path to the Gulfside Trail, until drifted snow obscured the route. By afternoon, fog hid the mountains; blowing snow hid everything else. From Jefferson to Madison it was just us and the cairns in a sea of white.

Stacking stones is an old business. Trail builders in the Northeast picked up the tradition from ancient cultures. The Scots may be best known for it; after all, the word cairn originates from a Gaelic term for “heap of stones.” But the rather prosaic definition does little justice to a tradition stretching back millennia and across continents. The early Norse used stones as precursors to lighthouses, marking important navigational sites in the maze-like Norwegian fjords. Vikings blazed routes across Iceland with varda (Icelandic for cairn) more than a thousand years ago. Cairns cross deserts on three continents and dot the Tibetan Plateau, the Mongolian steppe, and the Inca Road system of the Andes. Erected for navigation, spiritual offering, or as monuments of remembrance, heaps of stone occur in just about every treeless landscape in which one finds loose rock.

When European explorers began plying the arctic coast, they concealed messages (often their last) describing their discoveries in prominent cairns. They also dismantled many indigenous cairns thinking a comrade had hidden a message within.

Across the North American Arctic, Inuit people construct stone monuments called Inuksuk. Meaning “to act in the capacity of a human,” an inuksuk, like a cairn, can relay a variety of messages: memorial, resource site, or safe passage. The 2010 Vancouver Olympic logo portrayed an innunguaq—an inuksuk with a human-like form.

The extent to which American Indians in the Northeast constructed cairns is unknown. A scattering of evidence suggests they stacked stones for burials and memorials. A cluster of cairns atop a prominent peak in southern Vermont could predate European exploration. But because there is no reliable way to date the structures the architect remains a mystery.

The cairns of the Presidential Range are the most impressive stone heaps in the Northeast. Indeed, I have yet to find more remarkable cairns anywhere. Individual stacks stand sentinel like alpine custodians. Collectively, they represent an astonishing amount of work. One might even consider them art.

Chronic clouds on the Presidential Range create the need for cairns. Clouds cover Mount Washington 60 percent of the time, and heavy fog occurs 25 days per month. In 1878, W.G. Nowell, AMC’s councilor of improvements, noted in Appalachia, “It is our purpose to signal the easiest lines of travel on the Presidential Range and make walks there practically safe in fog and cloud.” Today, 50-plus miles of alpine trail cross the range, with, by my estimation, more than 2,500 cairns above treeline. They’ve been built tall to stand above snow, close together to help hikers in fog, and are also robust to hold against wind, frost, and rime.

The date of the first cairn in the Presidential Range is unknown. But by the late 1800s cairn building was in full swing as pioneers blazed trails across the range. Nowell described trail building around Mount Adams where “about 30 signals have also been set, with three stones for a base, and a fourth of milky quartz, or painted white when no stone of the desired color was at hand, upon them.” To aid in visibility white quartz stones still cap many Presidential Range cairns.

Today stone stacks in the Presidential Range are maintained by AMC volunteer trail crews, the Randolph Mountain Club, and White Mountain National Forest staff. Alex DeLucia, AMC trails volunteer programs manager, estimates AMC trail adopters and volunteer crews put in about 100 person-days each year to maintain alpine cairns. “To build a cairn that will hold up might take a team of two volunteers an entire day,” he says.

Visitors often build cairns as well. Some want to alleviate confusing navigation, while others simply stack stones or add stones to existing cairns to leave their mark. Such activity typically occurs in high-use areas. “It does happen, especially around Mount Washington and the Auto Road corridor,” says DeLucia. “We spend a lot of time dismantling them.”

Leaving the mountains as you found them is a good ethic. Principle 4 of Leave No Trace states, “Leave What You Find,” and that can refer to rocks on the ground or cairns already built. Honoring this becomes a challenge for people constructing authorized cairns in sensitive areas. In 2007 AMC crews completed a section of new trail across the treeless Sunday River Whitecap in western Maine. “We asked for AMC’s research director and alpine ecologist to provide recommendations so that any trail structures would not compromise [plants’] ability to survive,” says Andrew Norkin, AMC’s director of trails and recreation management in the White Mountains. “Every stone that’s moved can affect the plants behind them.” Move a stone, and you’ve changed their environment.

At Acadia National Park bald granite domes draped with stunted pines rise from the ocean. For me, traipsing through this wonderland is unmatched. The setting, with its persistent fog and trails across bare bedrock, also demands cairns. On a recent trip, I followed the park’s distinctive Bates cairns over and among rocky summits, under blue skies. The cairns owe their name, and unique shape, to Waldron Bates, an early pathmaker on Mount Desert Island. From the 1880s to the early 1900s Bates marked trails with cairns consisting of a pair of base stones, a mantle stone across them, and a pointer rock on top. That’s it.

What I saw on Cadillac Mountain’s South Ridge Trail muted my excitement: Vandals had toppled nearly a mile of Bates cairns. I could see from lichen growth on toppled stones, and the lack of lichen growth on the granite bedrock, where the cairns had stood. I struggled to understand why someone would make such a destructive effort. Some of the longer mantle stones had to weigh over 80 pounds.

Despite the sunny weather, I found myself route-finding one of the most popular trails in the park. The open granite bedrock provides multiple pathways. I knew I was heading the wrong way when I heard foliose lichens crunching underfoot. Cairns aren’t just a navigational aid; they also reduce impacts by keeping people on the trail.

I asked Charlie Jacobi, natural resource specialist for Acadia National Park, about the cairn damage. “It might take a crew of six people two or three days to repair,” he says. “It all depends on how much time we spend scavenging for new rocks.” Many of the longer, hard-to-find mantle stones had been shattered and would need replacement. To me, the scene was as offensive asrock on top. cracked headstones in a cemetery.

Outright vandalism is rare in Acadia compared to run-of-the-mill cairn tampering and stone stacking. (Building unauthorized cairns on many public lands is illegal, including in national parks and national forests.) Typically, visitors clutter existing cairns with small stones, and build new structures at rest spots where stones are available. This creates a series of problems. An aesthetic problem develops when visitors seeking a natural landscape encounter one dotted with rock graffiti. A safety concern arises when hikers in dense fog or snow end up following another visitor’s stone sculpture off route. And the park’s true inhabitants are also affected; critters that dwell under the rocks can find themselves homeless every time a tourist adds a stone to a cairn.

Jacobi has studied visitor behavior and cairn management for a decade. He’s trying to figure out how to stop, or at least slow, cairn tampering. Two studies, in 2002 and 2003, showed that signs placed at the beginning of a cairned section of trail substantially reduced stone removal and the more common act of adding stones to cairns. Even with informational signs, however, the studies showed that 23 percent (2002) and 39 percent (2003) of cairns on the most popular trails were altered every five days.

In the predawn light of autumn I leave the trees behind and reach the top of Huntington Ravine. The summit of Mount Washington rises above me. There is no wind, no clouds. Climbing over frost-shattered rock, I am greeted by a lawn of golden sedges. With my boot, I gently but deliberately knock over a delicate hiker-built cairn placed where someone sat and enjoyed the view. I am drawn to photograph the robust cairns marking the Alpine Garden Trail. Their character and resolve captivate me. They fit this landscape.

With so many people visiting the mountains, what seems like a trivial issue can spiral out of control. Is building an unofficial cairn along a mountain trail in the Northeast different from building one on the shore of an unnamed arctic island? Jacobi thinks so. “There’s no place for it today,” he says, “Not with thousands of hikers heading out daily.”

As a hiking culture, we have, it seems, an infatuation with piles of rock. Or maybe we have an infatuation with ourselves, and piling up stone is an opportunity to leave our mark in what many might deem a most innocuous way. The prevalence of tampering along popular trails and roads suggests to me that the intent is not malicious but due to unfamiliarity with a cairn’s purpose. People do worse, with spray paint, etching bedrock, or carving trees. But the tradition of stacking stones came not from building a monument to one’s self. It was to build for others—a memorial or a navigational aid. The intent lacked ego; it was just the opposite, an act of service.

Drenched in morning light among cairns in the Alpine Garden, I am reminded of my weekly winter treks to Lakes of the Clouds and Madison Spring. There, in that sea of white, I relied on one dark figure at a time. The scene here is different: Light and color saturate everything. Cairns—casting long shadows onto the tundra—stretch out over a mile, and more silhouettes appear on a distant ridge. I think of the Inuit in the arctic. They’re right; heaps of stone do have the capacity to act as a human. And here, by myself in the Alpine Garden, just as on the Northern Presidential ridge in winter, I feel not the least bit alone. No matter how wild the weather, there is something, someone, here I can trust.

Michael Gaige became fascinated with the stone-stacking tradition after following cairns hundreds of miles on foot in mountain landscapes throughout the world. He is a freelance conservation biologist and educator based in Saratoga Lake, N.Y.

An Idea Turns 100: A Photo History of The Appalachian Trail

A History of Juneteenth