AMC and the AT

Did you know that the AMC maintains more than 300 miles of the Appalachian Trail, including 105.4 miles in the White Mountains and the Mahoosucs?

As part of AMC’s outdoor stewardship work, helping to maintain and preserve the Appalachian Trail is paramount to our conservation efforts.

Working in conjunction with other agencies, our goal is to protect this national treasure for shared use and to safeguard access for generations to come.

Please do your part by committing to “Leave No Trace” practices, and encourage others to learn about and adopt these techniques to preserve the Appalachian Trail. 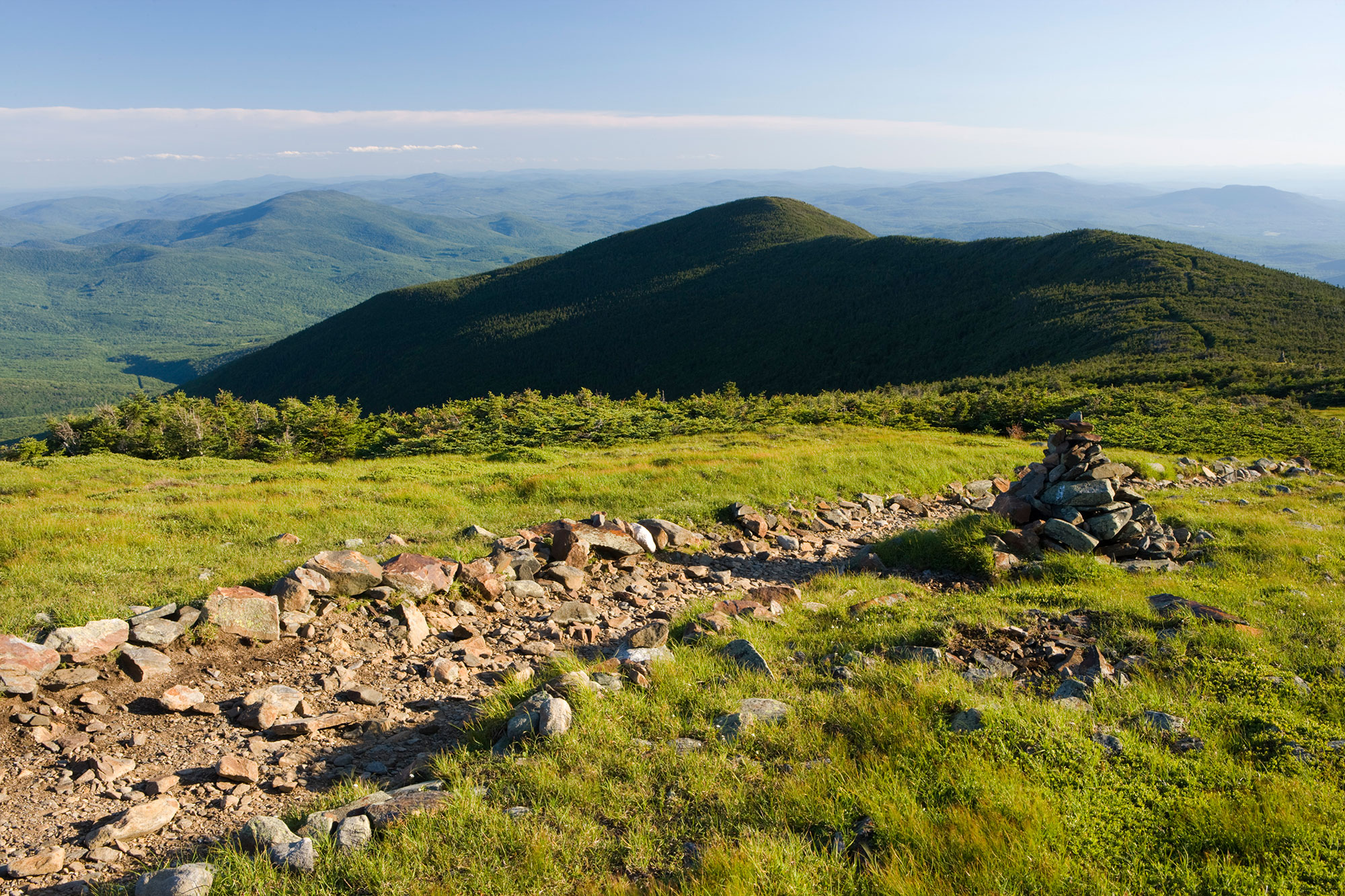 AMC operates eight backcountry huts in the White Mountains that offer breakfast, dinner, and bunks in summer months. Each are operated “off the grid” using alternative energy and sustainable operating principles.

We also maintain 14 backcountry shelter and tent site locations in the White Mountains and the Mahoosucs on or near the AT.  Here are some tips for backcountry campsites.

Whether you are looking to do a thru hike, section hike, or just want to enjoy a few hours on the trail – here are some common questions and resources to help you plan your adventure on the Appalachian Trail.

The Appalachian Trail extends from Springer Mountain in Georgia to Mount Katahdin in Maine. At approximately 2,181 miles long, the AT is the longest continuously marked footpath in the world.

A thru-hike can start at either of the trail’s termini. The direction of the hike depends on the hiker. If you can start in early spring it is best to start in Georgia as the mountains of the Northeast are very cold and snowy at that time. The majority of thru-hikers hike northbound, beginning in Georgia anytime from late-March to mid-April. Southbound hikers generally begin late May to mid-June.

Some hikers start heading north, then realize that they will not make it to Katahdin before Baxter State Park closes on Oct. 15. These hikers will often leave the trail, take some mode of transportation up to Katahdin, and then hike south back to where they got off the trail. This is a good option for those who are behind schedule but still want to hike the entire trail.

An Appalachian Trail thru-hike takes between five and seven months to complete the entire trail. (About 20 percent of hikers who begin the trail will complete it.)

The average hiker’s pace is about three miles an hour. This pace may be slower at the beginning of the trail, and become faster as hikers gain muscle strength and confidence.

However, if you’ve been doing 20-mile days, expect to slow down to 15-mile days when you hit the White Mountains of New Hampshire. The Whites are much more rugged than most of the rest of the trail.  Learn more about this section of the AT and check out our thru-hiker’s guide.

Thru-hikers need shelter, water, food and a change of clothes. Natural water sources like springs and streams are marked on official Appalachian Trail maps, but don’t assume they’re uncontaminated. Carry a water treatment system or boil water for at least a minute. Don’t pack fresh foods – they’re heavy and they spoil. Depend on dried foods and stops in trail towns to resupply. You will need to plan your resupply points and know the camping regulations.

Most hikers spend an average of about $1,000 a month –  not including gear. There are also a few fees hikers will encounter along the Trail. Some overnight sites require fees, particularly in New England. These sites typically range from $5 to $10 a night, but there are usually alternate sites without fees available within a few miles. In the White Mountains of New Hampshire, there are a system of full-service huts that run more than $100/night for meals and lodging. A limited number of thru-hikers can take advantage of the work-for-stay options. Hikers should be prepared to pay a campsite fee in Baxter State Park in Maine.

The Appalachian Trail (AT) speed record now stands at 41 days, 7 hours, 39 minutes. Karel Sabbe crossed the trailhead at Mt. Katahdin, completing the 2,189-mile AT faster than anyone before him.

The previous record of 45 days, 12 hours, 15 minutes, set by Joe “Stringbean” McConaughy in 2017, still stands as the self-supported AT record.

In 46 days, 11 hours, and 20 minutes, Jennifer Pharr Davis hiked from Georgia to Maine—a total of 2,181 miles. That time stands as the women’s record for fastest thru-hike on the Appalachian Trail.