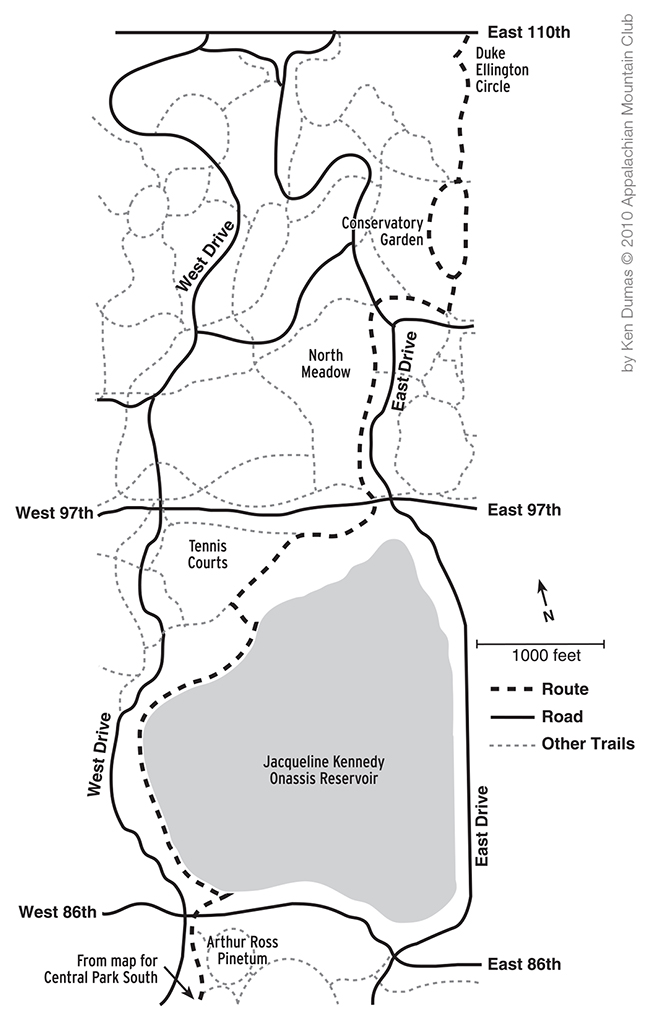 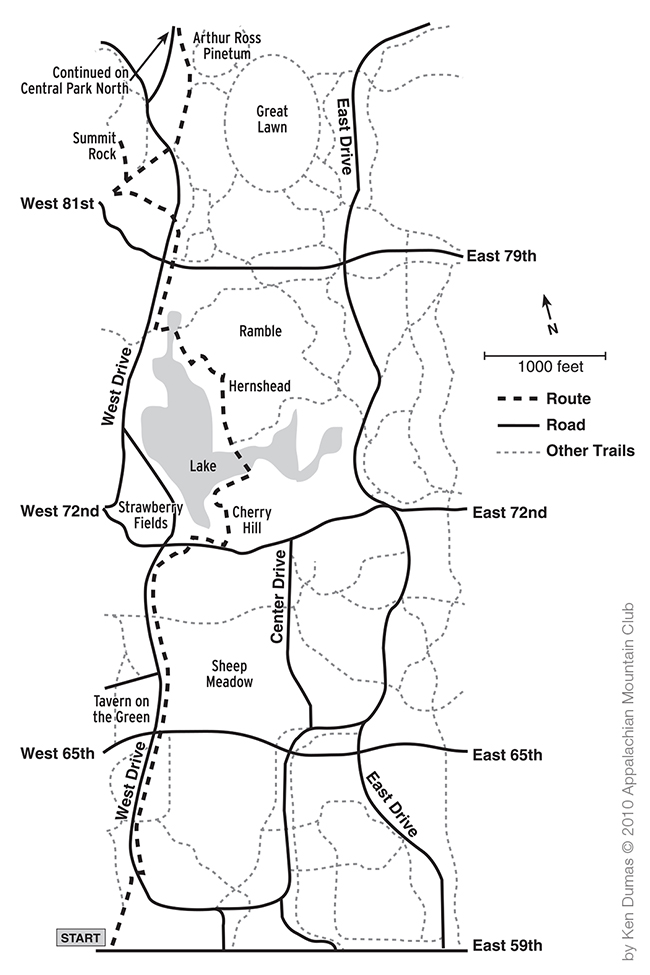 Climb a summit boulder, take in the view over a reservoir, and walk through history and greenery in this crossing of one of the world’s greatest urban parks.

Short Trail Description (for a complete description, see AMC’s Best Day Hikes in New York City)
Walk in Central Park on any beautiful summer Saturday, and you really would think it was the Fourth of July: “People dancing, people laughing . . . a real celebration.” Robert Lamm of the band Chicago wrote that song after coming back from just such a trip, penning lyrics that joined the public energy he’d witnessed to his own hopes for social progress.

Frederick Law Olmsted and Calvert Vaux didn’t live long enough to hear “Saturday in the Park,” but they would have been glad to hear what their work inspired. The park they created, the city’s “green lung,” has become a National Historic Landmark and an indispensable part of New York City for visitors and residents alike, redolent with history. The Central Park Conservancy, a private nonprofit, maintains and improves the park on the city’s behalf. This walk goes along the slightly less-developed west side of the park, a bit truer to Olmsted and Vaux’s original design. It begins at Merchants’ Gate on Columbus Circle, the most ornate entrance to the park. From there, bear left and follow the paved path down through a rock cleft toward West Drive, one of the park’s interior roads (closed to traffic on weekends). Cross it and continue past the ballfields to the left, parallel to the road, on another paved path. The skyline of the East Side rises above the trees beyond the fields, centered on the recently renovated Plaza (another National Historic Landmark). 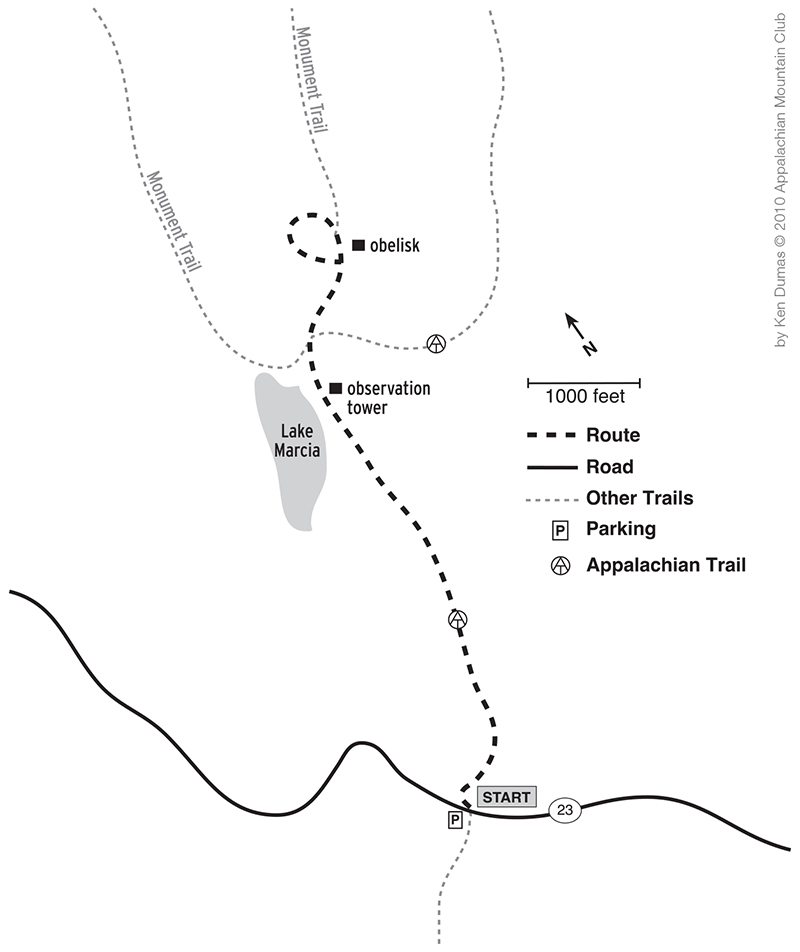 Walk the Appalachian Trail to New Jersey’s highest point and its panoramic views.

Short Trail Description (for a complete description, see AMC’s Best Day Hikes in New York City)
There is no subtlety in the naming of New Jersey’s highest mountain. Why, it must have been decided, use the name of a former governor or president, an American Indian name, or even the nearest community, when you can just call it what it is: “High Point.” Nothing more, nothing less. It’s even more appropriate when you consider the mountain’s location within the state—almost in the northernmost corner, so it is at the high point of the map of the state as well. From its summit obelisk, High Point justifies its name quite well. There are 360 degrees of views available of three states. 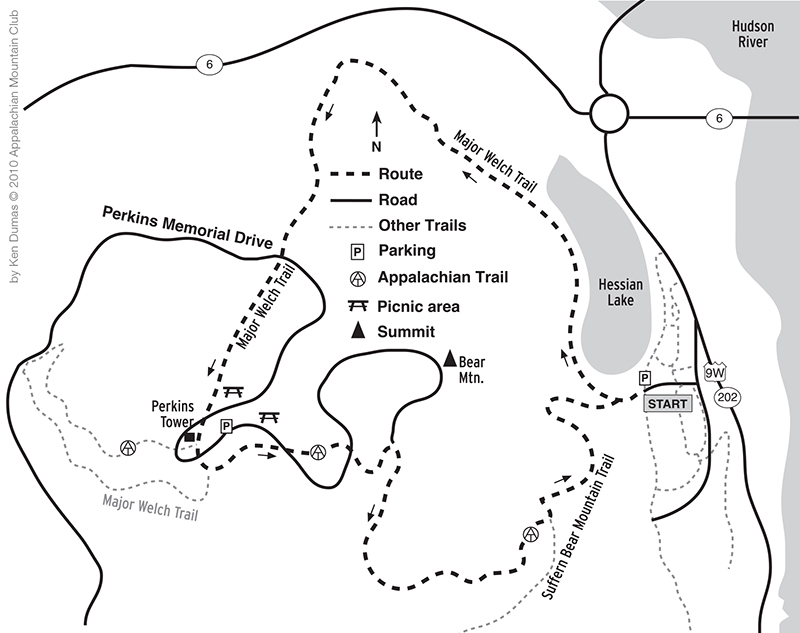 If the climb doesn’t take your breath away, the views will on this heavily traveled loop with deep roots in hiking history.

Short Trail Description (for a complete description, see AMC’s Best Day Hikes in New York City)
So many things are named after Bear Mountain—a bridge, a state park, an inn, a traffic circle, and even two roads in Westchester County leading to it—that it’s easy to forget that the mountain itself came first. And when you have climbed it, you’ll understand why it’s named “bear.” The mountain and its trails are not only steep; they are steeped in history—the history of modern hiking as well as that of the United States. In 1777 the battle of Forts Montgomery and Clinton was fought near its base, the only British victory in the Hudson River campaign that could have ended the Revolution. A century and a half later, one of the original stretches of the Appalachian Trail (AT) was blazed up its slopes.