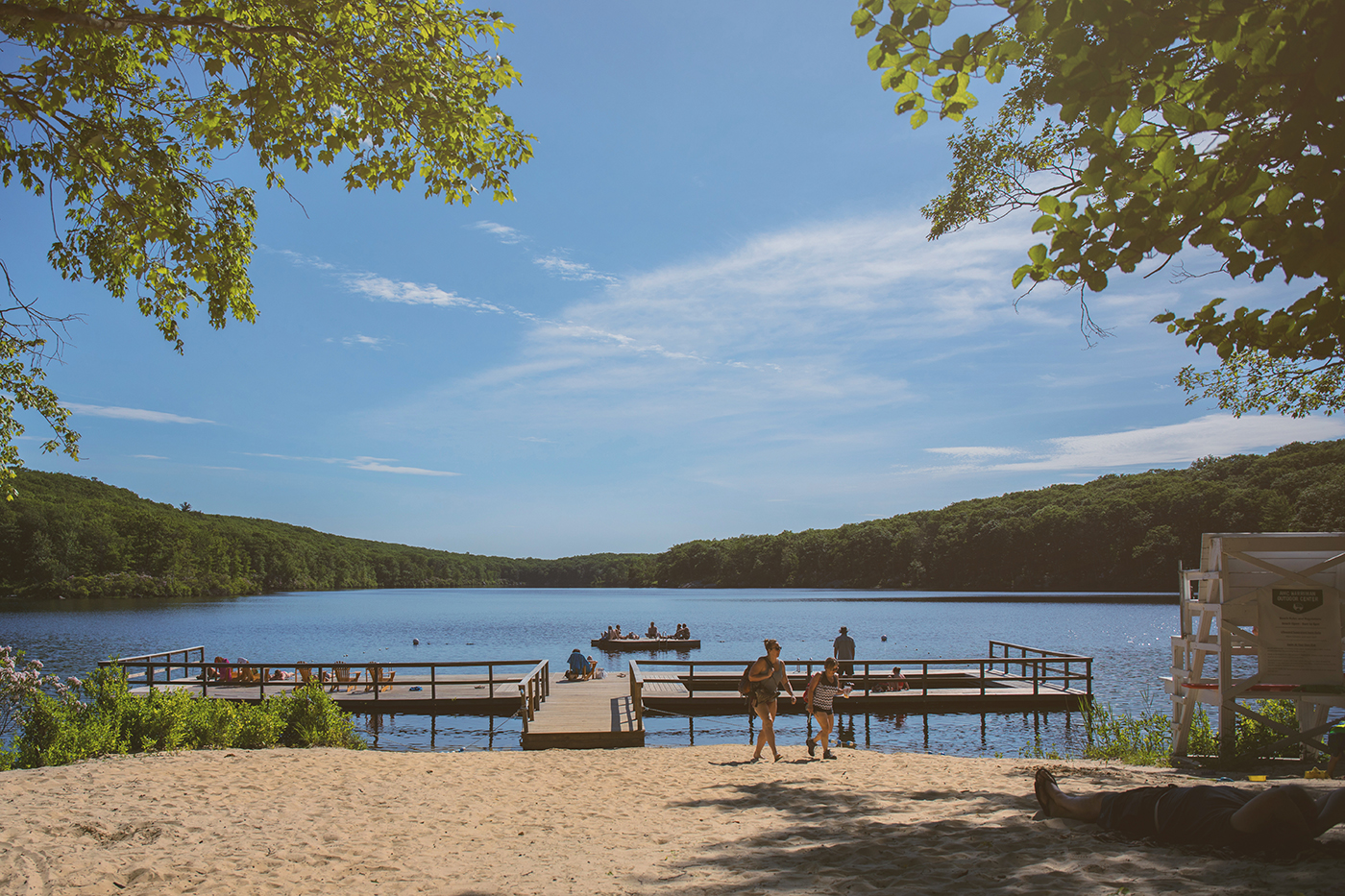 Central Park may be one of the world’s most famous, but it is by no means the only one in New York City. The best part? You don’t need a car to get to most of them. From Manhattan to the Hudson River Valley, the Metropolitan Transit Authority (MTA) services dozens of outdoor spaces in or near the city where you can hike, bike, camp, kayak, or simply be. Whether you’re looking for an outdoor space to escape for a few hours or a few days, here are eight places to explore on your next adventure that are accessible by public transportation.

The second-largest park in the New York State Parks system, Harriman offers great hiking, paddling, camping, and more on its 31 lakes and 200 miles of trails. Located 30 miles from Manhattan, the park features several hikes with beautiful views of the surrounding area and—on clear days—of the Manhattan skyline. A portion of the Appalachian Trail passes through Harriman, and several other marked trails crisscross the peaks and valleys of the park.

The Stephen & Betsy Corman AMC Harriman Outdoor Center is an ideal base camp for visitors, providing waterfront access to 64-acre Breakneck Pond and easy access to several popular trails. Accommodations include group and family cabins, tent platforms, and three-sided shelters. Guests can enjoy complimentary canoes, kayaks, and paddleboards, relax on the sandy beach, or swim in the designated swimming area.

From Penn Station, take the train to Secaucus Junction, N.J. The MTA Metro-North Port Jervis Line runs from there to three stations along the west side of Harriman State Park. Get off at Suffern, Sloatsburg, or Tuxedo and walk to trailheads. Suffern also has several taxi services if you are looking to access other areas in the park.

Pelham Bay Park is the largest park in the city, with miles of bridle paths, hiking trails, and shoreline on Long Island Sound. Explore gentle nature trails, visit Orchard Beach, or tour the historic sites of the park. One end of the Mosholu-Pelham Greenway lies within the park and brings walkers and cyclists through the Bronx as far as Van Cortlandt Park.

From Grand Central Terminal, take the 6 train to Pelham Bay Park Station and walk into the park. To access other parts of the park, the Bx12 bus runs from the Amendola Place/Westchester Ave. stop next to the station through the park to Orchard Beach.

Alternatively, take the 4 train from Grand Central to the Fordham Road station. Get on the Bx12 bus at the West Fordham Road/Jerome Ave. stop and get off at any stop between Amendola Place/Westchester Ave. and Orchard Beach. 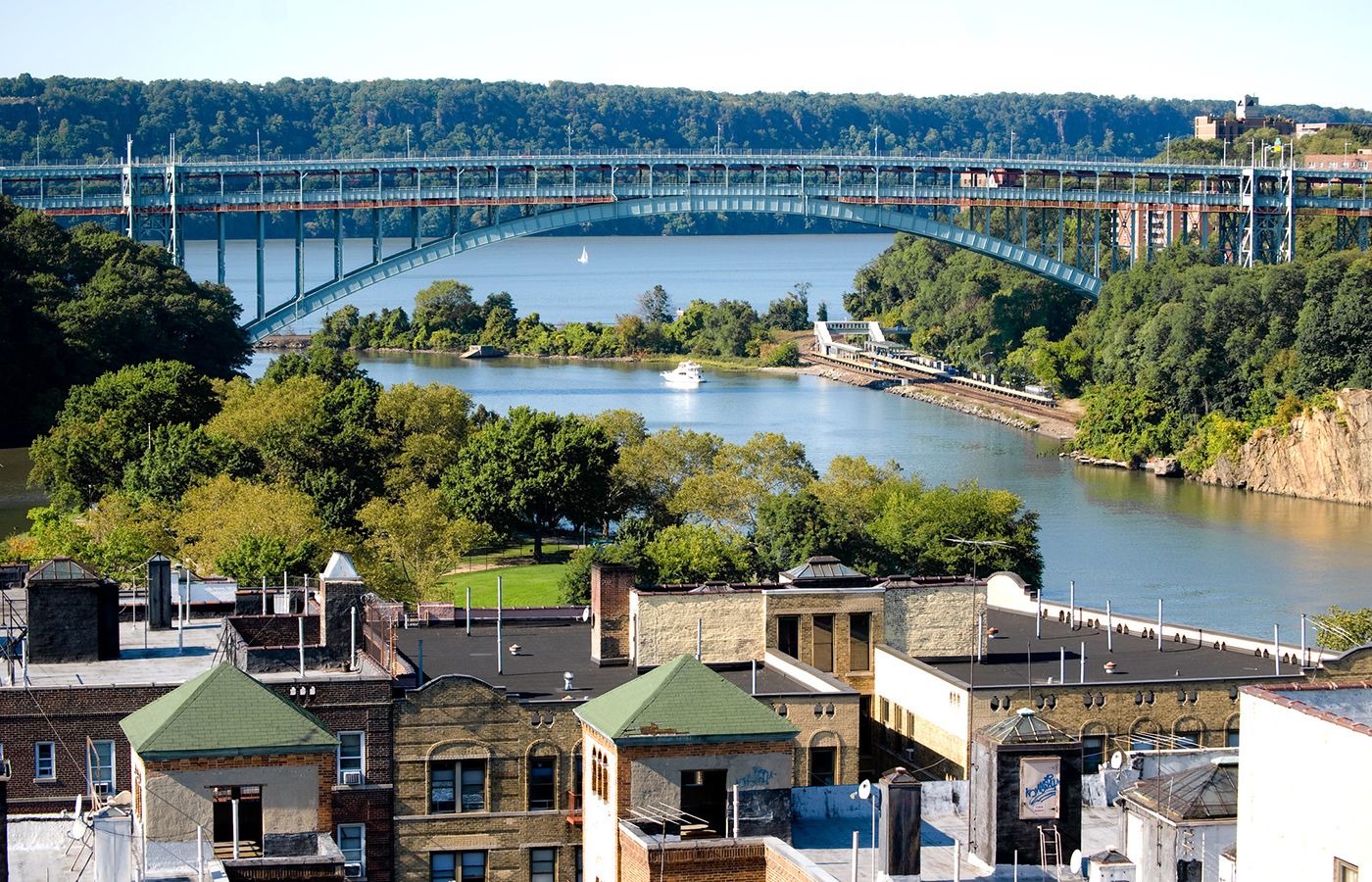 A stunning piece of undeveloped land on the northern tip of Manhattan, Inwood Hill Park’s dramatic caves and valleys are a stark reminder of the glacial history of the region. The Park contains the last natural forest and salt marsh on the island and offers ideal birdwatching for city-dwellers. Popular among hikers, dog-walkers, and families, the park is a great place to get outdoors without leaving the city.

With more than 70 miles of trails and views of the highlands around the Hudson River, Hudson Highlands State Park Preserve is a beautiful escape just 50 miles outside of the city. Walk gentle trails around the Cornish Estate ruins or Little Stony Point Beach, or hike a longer trail just south of the park to Anthony’s Nose (899 ft.) for clear views of the highlands on the rocky summit. The popular Breakneck Ridge Loop (3.5 mi.) offers another scenic—but very challenging—route that brings hikers up a steep rocky scramble to beautiful views of the Hudson River.

Kayak, canoe, and paddleboard rentals are available from Hudson River Expeditions, and guided tours bring visitors to the see ruins of Bannerman Castle on Pollepel Island.

From Grand Central Terminal, take the Metro-North Hudson Line to Cold Spring station. Walk along Fair Street north through Cold Spring to Little Stony Point, where the park’s network of trails can be accessed from the south. Alternatively, get off at Beacon Station and take the G bus from the Metro-North station through the City of Beacon to the Mount Beacon trailhead on the north side of the park.

On weekends between Memorial Day and Veterans Day, the Cold Spring Trolley passes between Cold Spring and Beacon on Route 9D and can be used to access trailheads along the west side of the park.

Breakneck Ridge Station offers a weekend-only alternative on the Hudson Line, with direct access to the Breakneck Loop and other nearby trails. Check the train schedule ahead of time; service to the Breakneck Ridge Station was suspended in Dec. 2019 and has not yet reopened (as of July 2021). Anthony’s Nose and other hikes in the Hudson Highlands are accessible from Manitou and Garrison stations. 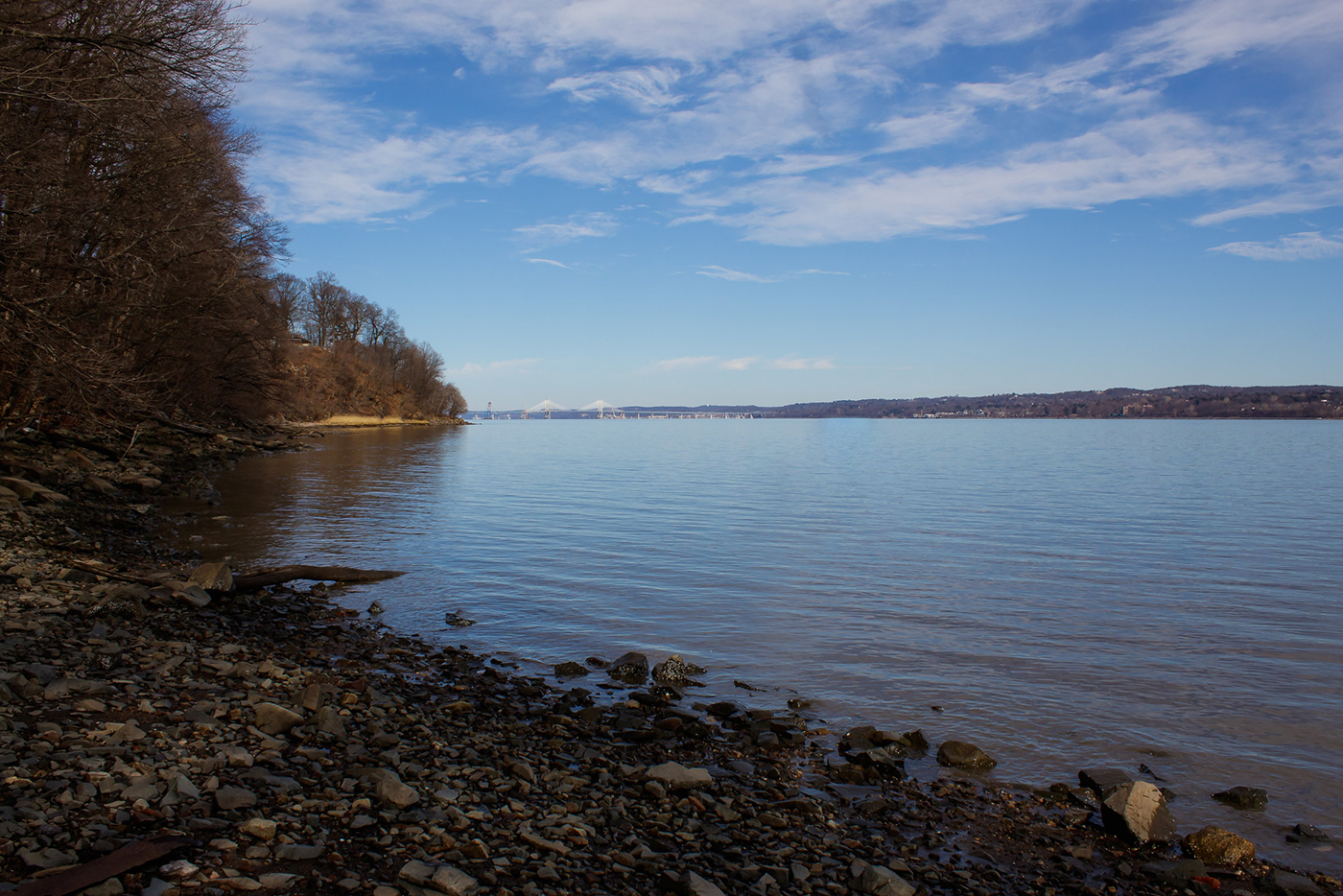 Palisades Interstate Park is a half-mile wide, 12-mile-long strip of public-use land that has protected the iconic Palisades Cliffs along the Hudson River shorefront for more than a century. The Long Path and Shore Path both run the length of the park, offering miles of scenic hiking trails of varying difficulties. There are several picnic areas scattered throughout the park, as well as a playground just north of the George Washington Bridge. Henry Hudson Drive and Old Route 9W are popular routes for cyclists. Located just west of Manhattan, views of the New York City skyline are accessible from nearly every point in the park.

Most public transit only reaches the southern part of the park, near Fort Lee. The northern part can be reached via bike or ride-sharing service, or walking along either of the paths that traverse the park.

From the George Washington Bus Terminal, take the N.J. Transit 186 bus to Dumont, and get off at any stop along Route 9W. Lemoine Ave. at Wall Street, Charlotte’s Place, or Sylvan Ave. are closest to trailheads; walk east toward the river to access the park.

Greenwood Lake, on the border between New York and New Jersey roughly 50 miles northwest of Manhattan, is a 9-mile lake surrounded by forest and wildlife area with access to several nearby hikes.

To access the Sterling Forest State Park trail network on the east side of the lake, follow Waterstone Rd. east over the lake, then take a left onto Sterling Rd. Follow Sterling Rd. and Teneyke Ave. until Route 17A, take a right, and walk 1.3 miles to the West Valley Trailhead.

The Surprise Lake Loop is a 4.4-mile trail on the west side of Greenwood Lake with some rocky scrambles, bird-watching opportunities, and serene views of Greenwood Lake. Access at the Abram S. Hewitt State Forest trailhead near the NYS 210 at Lake Shore bus stop.

The Appalachian Trail runs along the west side of Greenwood Lake and into Sterling Forest State Park. A rugged stretch of the A.T. runs north over Bellvale Mountain from an intersection with the Surprise Lake Loop to the Village Vista Trail Junction West in Greenwood Lake (0.3 mile from the Greenwood Lake Park and Ride). Another shorter section continues past the Village Vista Trail Junction over Mount Peter to a trailhead on Route 17A. Return along the Appalachian Trail or walk 2 miles along 17A and turn right onto Windermere Ave. to arrive at the Park and Ride on Jersey Ave.

Kayaks and paddleboards are available for rent at Jersey Paddleboards on Jersey Ave.

The 197 N.J. Transit bus leaves from the Port Authority Midtown Bus Terminal and runs northwest for approximately 1 hour and 40 minutes to Greenwood Lake.

Two paved pedestrian and cycling paths wind through Putnam County and start just a short distance from the Brewster station on the MTA’s Metro-North line. Together, they make up more than 20 miles of the scenic Hudson Valley Greenway. Both are excellent options for walks, runs, or bike rides outside the city.

The Putnam Trailway is a paved bicycle and pedestrian path spanning 12 miles of the former Putnam Division of the New York Central Railroad. From Brewster, the rail-trail heads west and south around several lakes and through hilly woods. The trail ends at Baldwin Place in Mahopac.

The Maybrook Trailway is a 9-mile section of the Empire State Trail that passes through wetlands, forests, and farms in the area. Starting from Brewster, it follows rail tracks through the county to Pawling. Another section continues to Hopewell Junction if a longer trip is desired.

Take the Metro-North Harlem Line from Grand Central Terminal to Brewster. To reach the Putnam Trailway, head up North Main St., then turn left onto Carmel Ave. Take a slight right just after the intersection onto Putnam Ave. and continue to the Putnam Trailway on the left. To reach the Maybrook Trailway, continue north on North Main St. for 0.6 mile, then take a slight right onto Cosby Ave. Take a left off Cosby Ave. onto the Maybrook Trailway.

The Metro-North requires bicycle permits, and there are restrictions on bikes during holidays. 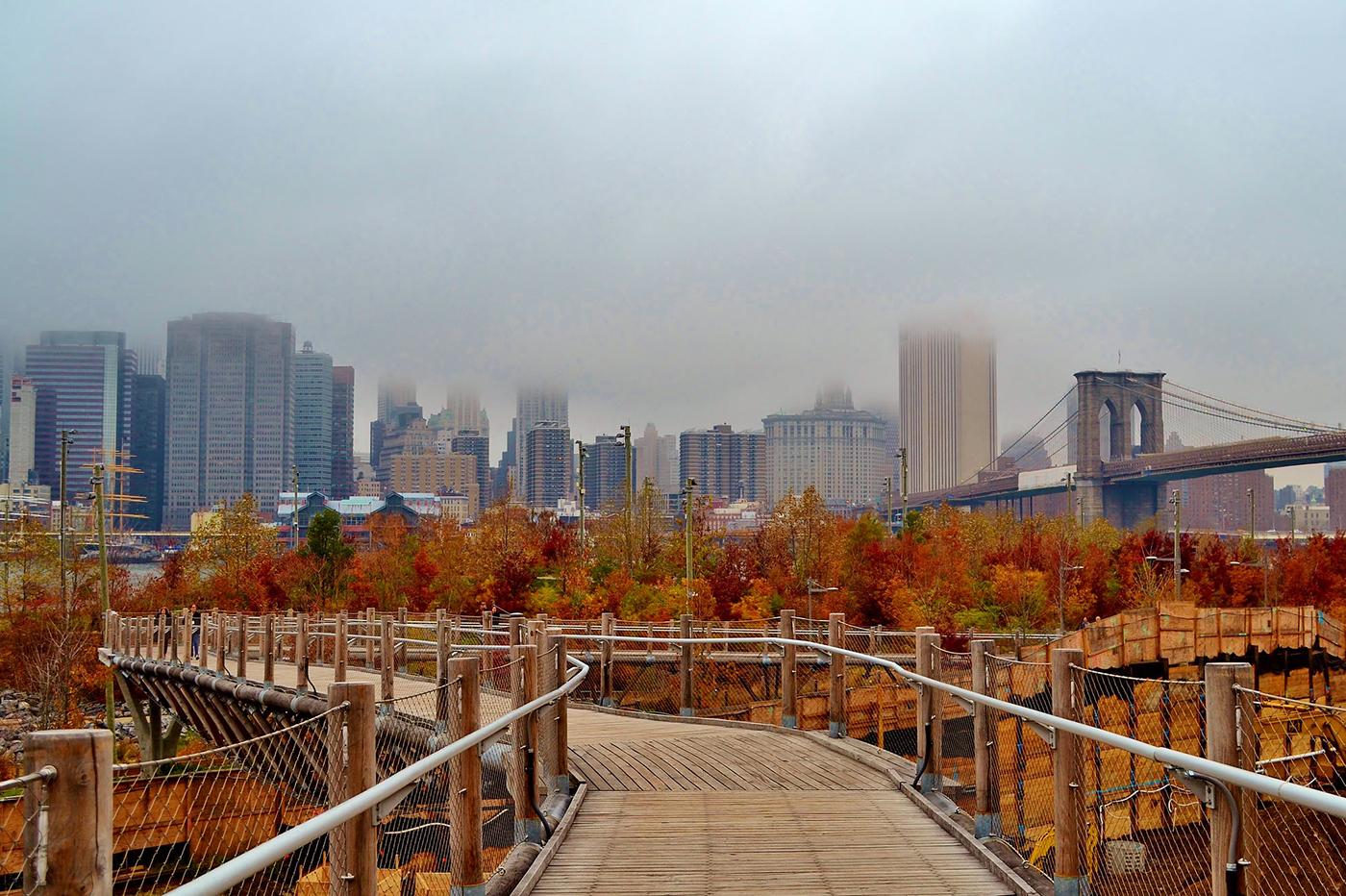 GIGI_NYC / CREATIVE COMMONS BY FLICKRWith its stunning views of the Manhattan skyline, Brooklyn Bridge Park—still in development—is one of the newest transit-accessible outdoor spaces in New York City.

With views of the iconic Brooklyn Bridge, this relatively new park along a formerly industrial section of the Hudson River is today a haven for families, hikers, and bikers in the city. Explore the piers, bike along the greenway, or walk the gentle paths throughout the park.

Head to The Cliffs to climb one of the largest outdoor bouldering areas in North America, open to climbers of all skill levels. Or, join the Brooklyn Bridge Park Boathouse for one of its free public kayaking sessions on Wednesdays, Thursdays, and Saturdays. Registration is required ahead of time, or you can launch your own boat from Pier 4 Beach.

For even more group activities in and around New York City, connect with the AMC New York–North Jersey Chapter.