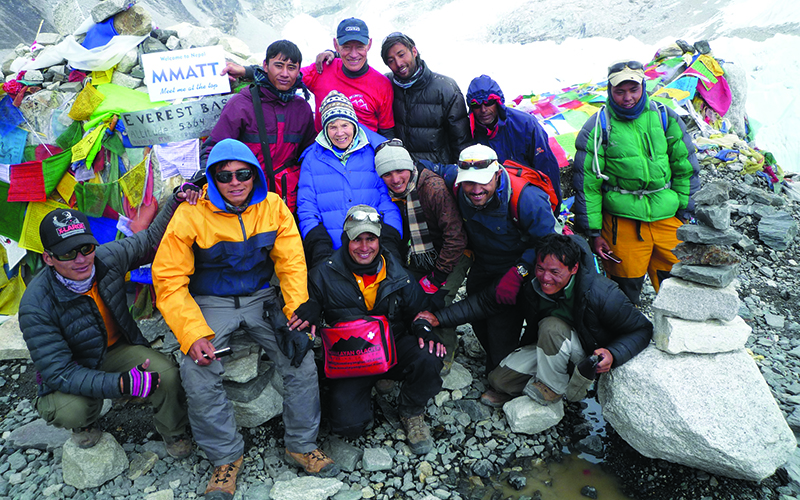 Penny Northrup KirkDuring her Everest base camp hike (center, in periwinkle), the indefatigable Edna Northrup made lots of fans in Nepal.

EDNA SAYS: When I graduated high school, I didn’t want to be a nurse. I didn’t want to be a teacher. I wanted to go to college for forestry, but women didn’t do that then. So I took a
train from Buffalo to Ellicottville, N.Y.—what’s now Holiday Valley Ski Resort. I could stay and ski the weekend for 50 cents. That was the beginning.

Penny says: She met my dad. It was the 1950s, and she started having children. She took all of us on hikes, but her major hikes didn’t begin until after our father passed, when Mom was 52.

After my husband died, I became mayor of Ellicottville. But after about eight years, the wanderlust kicked in. I wanted to quit this mayor business and get going on the Appalachian Trail.

She did the AT in its entirety, New Hampshire’s 100 highest, the Adirondack 46ers; she climbed Rainier when she was 68. Then, in January 2010, she got a phone call.

I was 84, still doing little climbs, keeping in shape. And I got a call from a gentleman who had climbed Everest when he was 69. He said, “I’m going to take a group to base camp, and I wish you would go along.” I laughed at him. But Penny calls me up and says it’s the trip of a lifetime. She and her husband would be right there with me. Penny says, “If you’re having trouble, we’ll turn around.” I thought, well, I’ve never turned around before.

We were on the trail for several days. I told Mom, “I’m going to set the pace for you, so you don’t have to feel like you’re holding people up.” Which wasn’t the case at all.

Penny stayed with me the whole time. She was a member of the U.S. Ski Team, so she knows her mountains and her snow.

We made it to Namche Bazaar, a trading city on the side of the mountain. A shopkeeper asked how old Mom was. When we told her, she put her hands on either side of Mom’s face. She was amazed. People there don’t live that long, and if they do, they’re blind. Mom created quite a stir.

I was feeling pretty good at that point. I was doing it! I sure didn’t have any trouble sleeping at night.

Then Mom started having a bit of altitude sickness. We thought it might be as high as we could go. But they checked everyone’s blood oxygen level, and Mom’s was one of the highest. I said, “Mom, this is the part where you have to accept help.”

Then the most miraculous thing happened. Out of nowhere comes a horse that had been with our group the entire time, but we hadn’t seen it. Mom looks over and says, “OK. I’ll get on that horse.”

I rode the horse to our next lunch stop, a couple of miles. We made it to base camp later that afternoon. I had two Sherpas, one on each side of me, and knowing I had the strength of two young men really helped. At almost 18,000 feet in elevation, it slows you down. But then I heard, “Edna! Edna! Edna!” The people already at base camp were cheering me on.

You have to lift your head and look straight up to see the tops of the mountains. The perspective, of that much more above us, you have the sense you’re in the realm of the gods.

Yes, you do. Then you turn around and have 50 miles to go back down. But it was a wonderful feeling: that I could make it, that I could see a part of the world everyone knows about but few people get to see.