From New York to New Zealand, Judi Desire is Solo Bike Touring Her Way Around the World 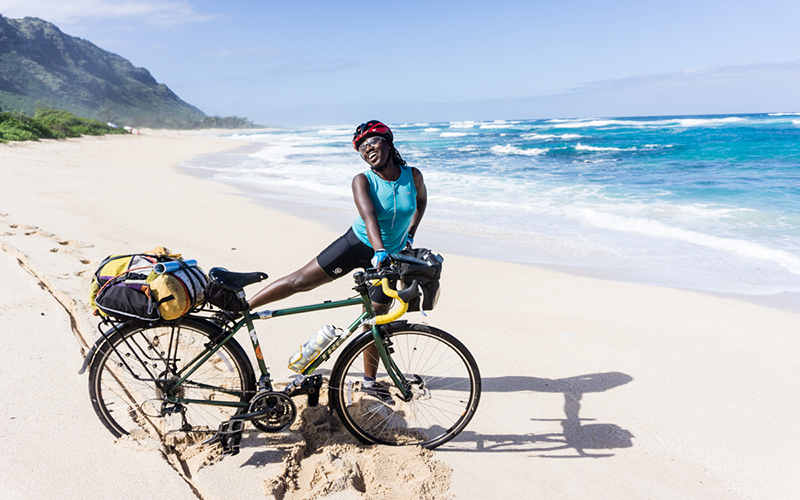 Courtesy of Judi DesireBike touring has brought Brooklyn native Judi Desire (pronounced dez-a-ray) to remote locations around the world—including the beaches of Hawaii.

If you asked Judi Desire (a Haitian-Creole name pronounced “dez-a-ray”) ten years ago if she ever considered bike touring in Africa, Asia, or South America, she would have thought you confused her with someone else. Traversing a country on two wheels, with all her belongings stuffed into pannier bags on bicycle racks seemed unthinkable to Desire, who never even learned to ride a bike as a child. Growing up in Brooklyn, she’d rarely set foot outside New York City, aside from a few trips with her mother to visit family in Haiti. She dreamed of traveling the world but even in her dreams, travel only included planes, trains, and automobiles—not bicycles.

Even after Desire learned how to ride a bike in her 20s, the idea of riding long distances with her clothing, tent, and tools in tow made her nervous. What if her bike broke down? What if she was too tired to ride to her destination? What if she forgot to pack something crucial? In fact, during her first attempt at bike touring from New York City to Cape Cod, Mass., she got lost in the Bronx just hours into her ride and had to adjust her plan. “I left too late in the day and couldn’t find the entrance to the South County Trail, so I had to find a hotel in the Bronx,” Desire recalls. “The next day, I realized I over-packed, so my bags were so heavy that I was exhausted after only 20 miles.” Her 7-day bike tour to Cape Cod turned into a 3-day bike tour to Connecticut, where her friend from Woods Hole, Mass., picked her up and drove her the rest of the way.

Desire is a bit embarrassed telling that story, but getting lost in her own city then going on to solo bike tour six continents—with trips through Portugal and Spain, New Zealand, Southeast Asia, South Africa, Costa Rica, and many more—reveals the passion with which she approaches cycling.

In 2010, while in her late twenties, Desire was working as a computer programmer and mentioned to coworkers that she wanted to visit Europe. One of her supervisors immediately started talking about how wonderful it would be to bicycle through Amsterdam or Berlin. Desire was intrigued. She had never ridden a bike at that point so the idea of exploring another country by bicycle seemed far-fetched to her. Nevertheless, Desire recruited a few friends to teach her to ride. Four months later, Desire was in Europe, having learned to balance on two wheels but not how to properly use the breaks or shifters, let alone navigate through traffic. Long-distance bike tours weren’t yet in the plans but she enjoyed short rides around town to get a feel for the cities she was visiting.

Desire decided to attempt her first proper bike tour in 2012; she doesn’t count her Cape Cod mis-adventure. She booked a one-way ticket to Sao Paolo, Brazil, where she planned to spend three months exploring and bike touring with locals and travelers she met through the nonprofit homestay and networking platform, Couchsurfing. “After bike touring with two couch-surfers in Brazil,” she recalls, “I realized that bike touring wasn’t as complicated as I thought it would be. Before I knew it, I was six months in.” Homestay services became Desire’s doorway into the bike touring community, where members have helped her plan routes, understand what to expect, and prepare for the unexpected.

From Brazil, Desire tent camped on bicycle tours across Peru, Bolivia, Argentina, and Uruguay, where she often bunked down in the bushes. In Bolivia, she was invited to camp in the back yard of a police officer, whose children mistook her tent for a playhouse and crawled inside to play games and decorate the walls. In Argentina, she learned that female firefighters had their own dormitories, and would stay there when she had the chance. In several cases, fire chiefs phoned fire houses in other cities to vouch for Desire and let the chief there know to expect her.

Desire still works as a computer programmer, which has allowed her to occasionally make money while bike touring abroad; usually, though, she works from home—but only long enough to save up for her next plane ticket. She only purchases one-way tickets because she likes to “let her emotions plan the return location and time,” as she puts it. So why did she decide to return to the United States after just six months? “To save up enough money to go on another bike tour!” she says, laughing.

How does Desire decide where to go next? In many cases, she chooses future destinations based on recommendations gathered from other bike tourists she’s come across while traveling. In other cases, she’ll seek out a specific festival or event she’d like to attend and plan a tour around it. Whenever she runs out of money on a bike tour, Desire returns to the Harlem apartment she sublets to subsidize her trips, despite having eight bicycles crammed into the living room. Every time her bank account is replenished, her passport gets a few more stamps.

“Exploring the world by bicycle gave me a new sense of freedom and liberation that I had never felt before,” she says. “When you arrive somewhere on a bicycle, people just treat you differently than if you arrive on foot. They are more curious about you and have so many questions for you, so you wind up meeting so many people and making friends.” 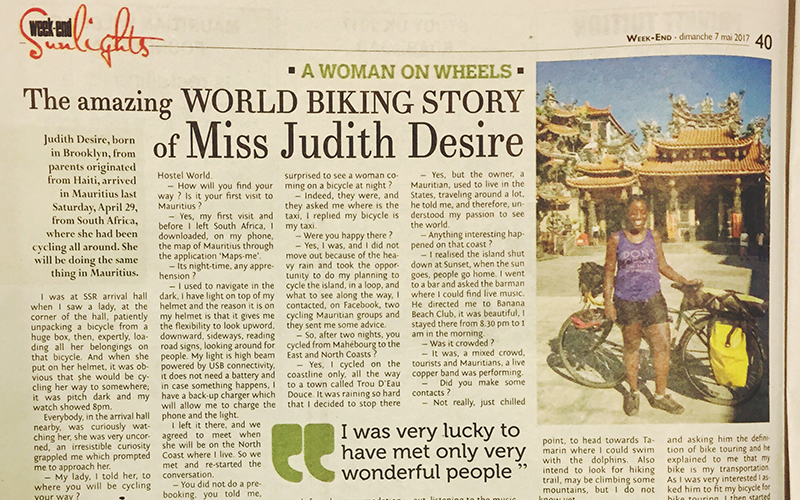 Humans have been setting off on self-contained bicycle tours, both long and short, almost as long as we’ve had bicycles. Today, women, and women of color, in particular, are extremely underrepresented in bike touring. Despite having multiple bicycle mechanic and bike tour leader certifications, Desire describes frequently being undermined and patronized by male bicycle mechanics. As a dark-skinned Haitian-American woman, Desire also considers her race and gender before choosing where to bike tour. “When I pick a country”, she says, “I consider the level of racism against its own population, and how they treat their Black residents and immigrants.” If she notices strong oppression in a place, she plans a tour elsewhere.

Desire says she’s never felt like the victim of racism while bike touring, though she’s felt exotified in some regions. In Southeast Asia, men and women pulled on her braids (which, unfortunately, also happens to many Black women in the United States) and poked at her muscles, surprised to see a female that was so athletic. Though men often stared at her and occasionally poked her arms or legs, she found women to be more aggressive, grabbing at her arms, legs, and buttocks. In one instance, a Vietnamese woman yanked on her breasts, trying to confirm Desire was, in fact, a woman.

While exploring a residential, non-touristy neighborhood in Istanbul, a man firmly slapped Desire on her shoulder, in front of countless seemingly unalarmed bystanders, and walked away. Her host later informed her that Black people in Turkey are perceived to be prostitutes and because she was wearing shorts and short-sleeved top, she was automatically assumed to be a sex worker.

Though some Americans like to think that the United States is safer and friendlier than other countries, Desire is hesitant to bicycle across the United States because of the “extreme racism” in so many states. The southern U.S. justifiably receives a particularly bad rap, but racism has never stopped at the Mason-Dixon line. During a bike tour from New York to Canada, one of Desire’s hosts in upstate New York, a white male, warned her that his family was racist. Though he was polite and did his best to make her feel welcome, when the host brought Desire to a family gathering, the man’s relatives refused to speak to her or shake her hand. “And this was in New York!” Desire exclaims. “Imagine what would happen out west!”

For the past few years, Desire has spent most of her time in Harlem, working to promote cycling in her own community. In 2017, she founded Uptown & Boogie Bicycle Advocacy to offer learn-to-ride classes, bicycle repair education, and group rides in Upper Manhattan and the Bronx—communities that lack the cycling infrastructure and programming enjoyed in lower Manhattan and Brooklyn. Though the pandemic temporarily halted much of her programming, Desire is optimistic that the surge in cycling in New York City in recent months may lead to long-term behavioral change, particularly in her own community, where ridership has increased among people of color.

“Biking changed my life,” she says. “My goal now is to use the bicycle to bring positive change to my own community.”