Where to Glade Ski in New Hampshire, Thanks to Granite Backcountry Alliance 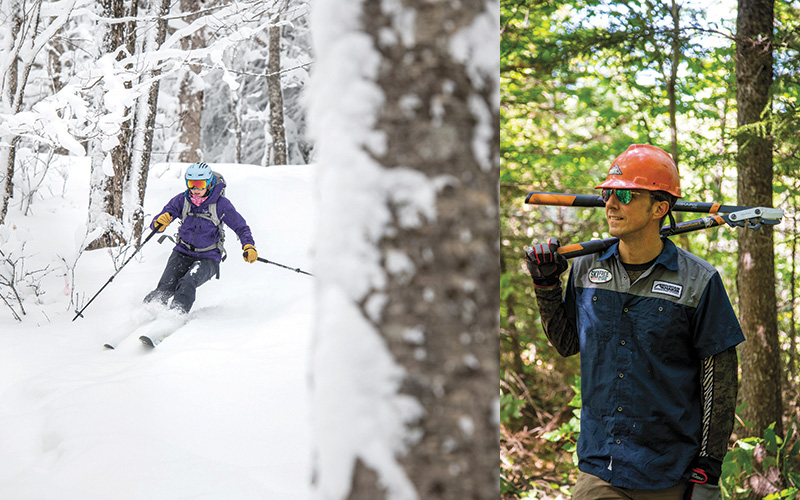 A frigid northwest wind greets me as I near the summit of North Doublehead Mountain in Jackson, N.H. The temperature is hovering in the mid-20s, but the fierce gusts make it feel much colder and will keep me from lingering too long at the top. No sweat, I think. I’m not here for a picnic. I’m here to ski.

Unlike ski resorts, with their abundance of trails and lifts, Doublehead offers one ski trail and no lift service. The only way to ski this 3,000-foot mountain is by hoofing it 2 miles from the parking lot to the summit, lugging your skis on your back or attaching climbing skins to your skis, as I’ve done. It’s a workout but well worth every step.

Once I reach the summit, I peel off the skins and stash them in my backpack. I adjust my bindings, lock my boots, take a deep breath, and use my poles to push off into the brisk mountain air. As I lean into my first turn, my legs are still burning from the steep uphill climb, but they settle in quickly as I accelerate downhill over the soft, untouched snow, into the peaceful boreal forest.

This beautifully designed, zigzagging trail originally was cut in 1934 by the Civilian Conservation Corps (CCC), an initiative of President Franklin D. Roosevelt’s New Deal that employed men ages 17 to 28 for conservation projects on public land across the country. By the early 1940s, the CCC had cut more than 60 ski trails in the White Mountain National Forest. Some of these were later incorporated into New Hampshire’s burgeoning ski resort industry, including Wildcat and Cannon mountains, while other trails eventually fell into disuse and were abandoned as the popularity of lift-serviced ski mountains grew.

But with the resurgence of uphill and backcountry skiing in the Northeast, due in part to advancements in alpine skiing gear and in part to greater access to public lands, a new wave of off-piste skiers and snowboarders are seeking out these remote trails of yesteryear—me included. As the wave swells, the demand for more skiable terrain has increased dramatically, putting pressure on public land managers to respond. Enter Granite Backcountry Alliance.

Tyler Ray, the chief of GBA’s board, as well as a business and real estate attorney in New Hampshire’s Mount Washington valley, founded the North Conway-based 501(c)(3) in 2016 with the mission of advocating for the expansion, development, and maintenance of backcountry terrain in New Hampshire and western Maine. Practically speaking, “We want to work together with land trusts and communities to help diffuse the heavily used [ski] areas and bring attention to trails that normally wouldn’t see a lot of visitation,” Ray says.

In New England, where the once-logged forests of the early 19th century are now densely vegetated, backcountry skiing trails are few and far between, and several of those that do exist were illegally cut, enraging landowners and potentially harming fragile habitats. GBA’s goal is to replace guerrilla clearing with community-sanctioned skiing—both by reviving old CCC trails and by developing new wooded ski zones, known as glades. “Due to the very limited supply of terrain, our aim is to create a unified culture of skiers—one that respects the land and its owners and does not permit unauthorized cutting,” says Ray, who first learned to ski at age 2 on Maine’s Pleasant Mountain.

“Expanding the playground” of skiable terrain, as Ray calls it, isn’t a single-handed affair. Before an ax is swung or a limb is cut on any of GBA’s proposed runs, professional designers analyze the terrain, and the U.S. Forest Service conducts an environmental review—not unlike AMC’s process for hiking trails. The glades, skiable sylvan corridors roughly 50 feet wide, are created by thinning the forest’s underbrush, composed of saplings and the like 4 inches or less in diameter. Leaving the larger trees provides protection from the wind and sun, preserving the snow throughout the season and yielding challenging obstacles to ski around. Once a project is approved by the Forest Service and GBA project leaders have flagged the work area, volunteers come out en masse for trail work days: limbing trees, cutting stumps flush to the ground, and leaving the brush onsite to decompose.

Since their inception in June 2017, these summer and fall work weekends have caught fire with a groundswell of volunteers from all walks of life. For their time and sweat, GBA volunteers get meals, tool trainings, and post-work drinks and raffle prizes. Dan Osetek of Conway, N.H., sees volunteering as a way of pre-paying for his annual backcountry ski pass. “Every volunteer knows their collective group effort will pay off as soon as the snowpack fills in,” he says. “It is very rewarding to come back and ski a glade in the winter that you helped to cut during the offseason.” Osetek sees GBA as bringing some of the thrill back to a familiar activity: “After a lifetime of lapping a chairlift, backcountry skiing and riding has become dynamic again, and [it] turns a single run into an empowering journey.”

Daryl Kent of Rye, N.H., enjoys creating not only a network of ski trails but also a network of like-minded supporters of human-powered recreation. “It’s amazing to show up and instantly meet folks that share the same passion as myself,” he says. “Many folks show up alone, and some don’t have their network of backcountry buddies to ski with yet, so the volunteer days are great to establish these relationships for future missions in the backcountry.”

Past volunteer projects have included rerouting a half-mile section of Doublehead Ski Trail in summer 2017. For that work weekend, Osetek, Kent, and nearly 30 other GBA volunteers joined the Forest Service in an effort that laid the groundwork for a subsequent new parking lot, built this past fall, designed to improve access to the ski trail and alleviate parking congestion. The effort hit a sweet spot for an organization that aims to expand skiable terrain while spreading out ski traffic.

One area of the White Mountains that traditionally sees more snow than people is the small village of Randolph, N.H., population 290. Nestled between the lofty northern Presidential Range and the Crescent Range, Randolph is a quaint mountain hamlet that many tourists tend to cruise past on their way to other North Country ski resorts. What motorists fail to see from their cars are the miles of hiking, snowmobiling, and ski trails tucked away in the town’s 10,000-acre forest, just waiting to be discovered.

“One of the founding cornerstones of the Randolph Community Forest is that it remains a ‘working forest,’ for the purposes of contributing to the local economy,” says John Scarinza, a Randolph resident of 49 years and the chair of the town’s forest commission. “Another tenet was that the land remains open to the public for traditional recreational purposes.”

In recent years, the commission had been looking to attract more winter visitors to the forest. It found its answer in February 2017, when GBA proposed developing five ski glades, appealing to all ability levels, off the summit of Mount Crescent. The commission approved the project, and in August 2017, Ray and some 65 GBA volunteers took to cutting and thinning 75 acres of ski terrain.

It didn’t take long for word to spread about Randolph’s glades. As the snow deepened that winter, Scarinza noted many out-of-state vehicles, all with rooftop ski racks, in the trailhead parking lot. “I couldn’t believe how many people were skiing,” he says. “I spoke to skiers who traveled from as far away as New York City…specifically to ski the glades in our town forest.”

Ray isn’t surprised. “These projects are really exciting to see materialize,” he says. “People will come from away to ski here. These trails are a huge economic driver, and by opening them up, we feel towns will generate more income from skiers staying at hotels and buying food and gas nearby.”

The idea of supporting communities through local recreation development harkens back to the CCC. The idea worked in the 1930s and ’40s, and Ray is confident a similar model can assist in bolstering small-town economies today while serving as a catalyst in reviving long-forgotten trails. “We’re seeking projects all over New Hampshire,” Ray says. “For a while, human-powered activity flew under the radar, and no one really knew what [backcountry skiing] was all about until of late. Now we’re seeing [outdoor lovers] arrive to ski and spend money in the towns, and people are taking note.”

As more terrain opens every year, more people, some with little backcountry experience, are showing up to ski it. “Our challenge is taking the resort skier and converting their mindset to realizing they’re not at the resort anymore,” Rays says. “There’s no ski patrol. This is the world of self-sufficiency, of knowing what’s in your backpack, and of making calculated decisions based on your observations of the snowpack.”

To support GBA’s efforts in educating and training backcountry skiers and snowboarders, other groups, including AMC’s New Hampshire Chapter Ski Committee, offer beginner to advanced classes, ranging from one-day primers to multiday expeditions. Casy Calver of Lebanon, N.H., a New Hampshire Chapter ski leader and GBA’s secretary and membership manager, has seen a rise in the number of people signing up for backcountry touring courses, including avalanche safety clinics and the chapter’s highly popular winter school, held at AMC’s Cardigan Lodge in Alexandria, N.H. Calver is especially passionate about introducing other women to the sport and says her best days on snow have been with women learning to backcountry ski for the first time. “There’s just something really special about finding out how strong you are and how brave you can be among a group of like-minded ladies,” she says. “Such a little thing can lead to so much growth and community.”

As the GBA family grows, so do the number and scope of the group’s projects. This past fall, the group worked with local land trusts and the Forest Service to open glades on Barlett Mountain, home to the 1933 CCC-cut Maple Villa Ski Trail, and on South Baldface Mountain in Chatham, N.H. Ray says both glades are slated to open to skiers this winter, once the snowpack is sufficient.

In the meantime, ski season is already in full swing in Mount Washington valley. GBA’s crew has put in the work, and now they’re ready to enjoy the fruits of their labor. Volunteers are energized, and so is Ray: “The coolest thing I get to see is when these volunteers come back to ski the lines they created,” he says. “They made a connection and an emotional attachment to the land that they didn’t expect. People find out what it feels like to give back, and that’s what we’re looking to perpetuate in the future.”

WHERE TO GLADE SKI IN NEW HAMPSHIRE: 3 TRAILS

This legendary ski trail starts at the new parking lot off Dundee Road in Jackson, approximately 1 mile east of Black Mountain Ski Area. Narrow in spots, the ski trail ranges from 15 to 25 feet wide. The lower half is appropriate for beginner and intermediate skiers, while the summit is better for more advanced powder lovers.

One of the larger and more challenging glades GBA has cleared sits off the east face of South Baldface Mountain. Volunteers thinned a dozen runs, suitable for intermediate and advanced skiers, this past fall, with a planned opening later this winter. Check GBA’s website for updates.