Stargazing: How and Where to Go to See the Stars 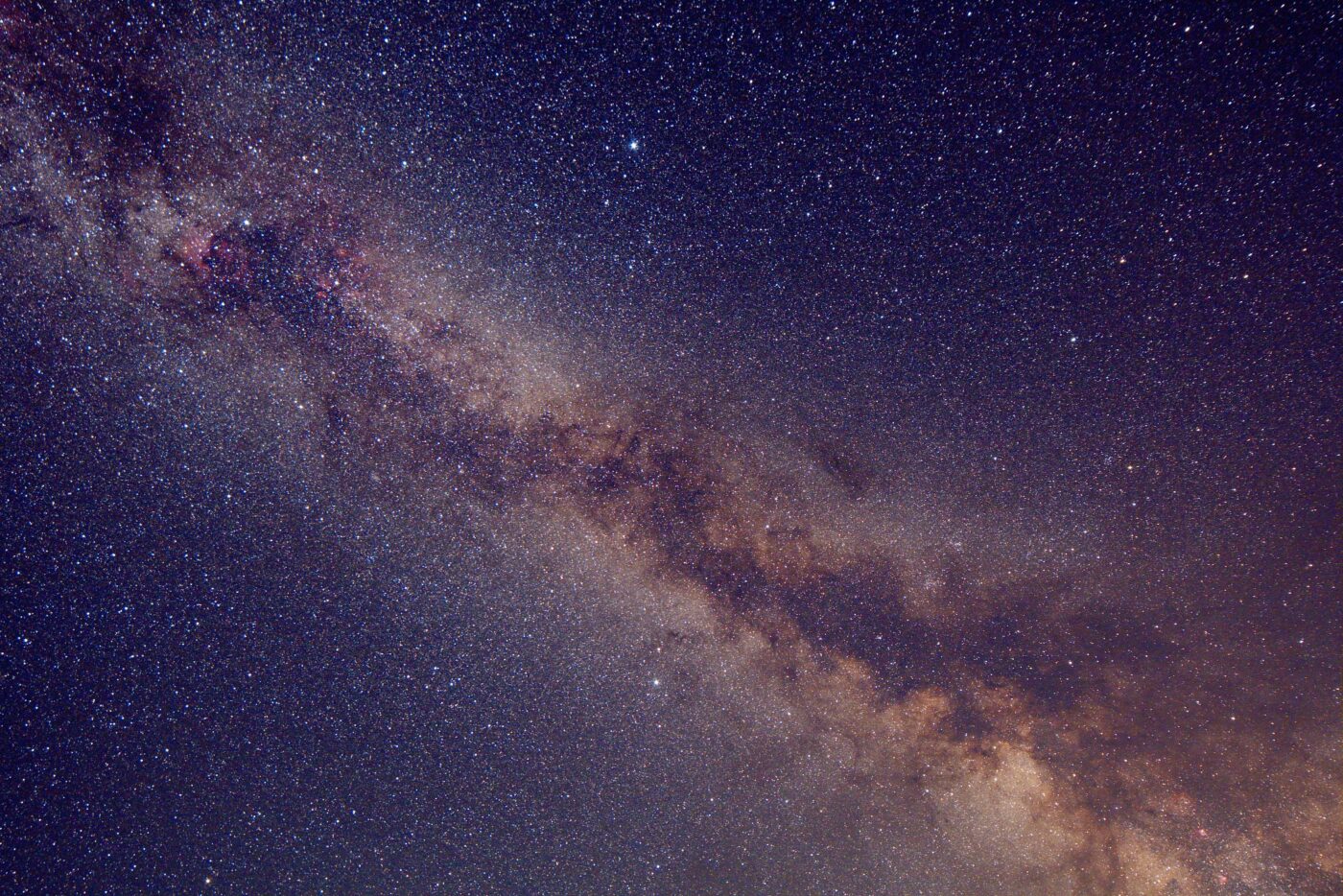 James Lowenthal/AMC Photo ContestThis photo of the Milky Way was taken from the fields outside AMC’s Highland Center. The galaxy gets its name from how it appears from Earth.

From his backyard in Augusta, Maine, astronomer Jon Silverman can look into the night sky and see light emitted from stars hundreds, thousands, even millions of years ago. Anyone can. All it takes to see light coming from, say, the Andromeda Galaxy, our closest galactic neighbor at 2.5 million light-years away, is a simple pair of binoculars.

Andromeda appears four times wider than the moon from our perspective on Earth, but it’s not visible to the naked eye, says Silverman, who is president of the Central Maine Astronomical Society.

Binoculars’ wide front lenses—called “objective” lenses—take in more light than our eyes can. That light is directed through a pair of glass prisms that orient the light correctly, since images passing through the curved objective lens are flipped. Finally, the light enters the eyepieces, which expand the image and focus it so it’s visible.

“You’d be amazed how many objects there are in the sky that are not too small to see, they’re too dim to see,” Silverman says. “You point your binoculars at it, and it comes into your vision.”

Stargazing presents an easily accessible year-round activity that can be enjoyed with no prior experience. It also provides an endless source of inspiration; after all, it’s effectively impossible to run out of things to look for in the night sky.

Heading out for their first time, true beginners will need warm clothes (even summer nights can get chilly), bug spray, and a pair of binoculars, if they’d like.

At their core, binoculars are simply two telescopes side-by-side, and a cheaper alternative to a telescope. Binoculars are described using two numbers—the magnification, which appears as a number followed by an ‘X,’ and the aperture, or how wide the objective lens is in millimeters. When picking out binoculars for stargazing, look for a magnification between 7x and 10x and an aperture between 35mm and 60mm to ensure you can get a good view while still being able to hold the binoculars steady.

A number of basic smartphone applications can also guide your viewing. “The best one is SkySafari,” says Dr. Doug Arion, professor of physics and astronomy at Carthage College and director of Mountains of Stars with AMC.The app, which is available on Android and iOS. provides information on the what’s visible in the night sky, picturesfor reference,and a three-dimensional map of the cosmos. “You can actually learn everything about everything just from this one app,” Arion says.

Other well-reviewed applications include Sky Guide, SkyView, and Star Walk 2, which are available on iOS and Andriod. 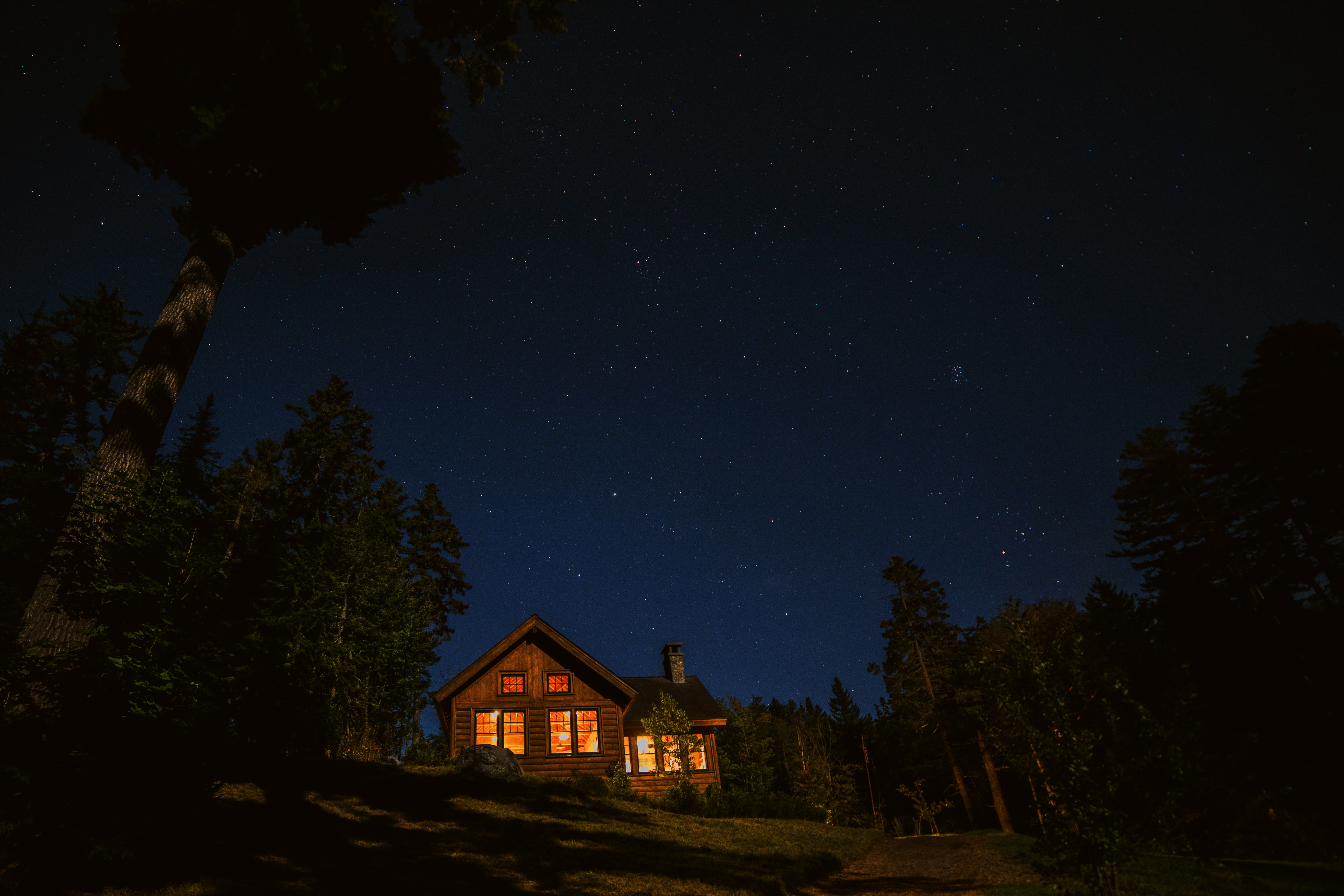 Paula ChampagneAMC’s Maine Woods is nestled in some of the darkest regions of the Northeast—head up to Gorman Chairback Lodge and Cabins for a perfect stargazing opportunity.

Many locations work for stargazing, but wide-open areas where trees won’t obstruct your view are best. For this reason, Arion suggests heading to the beach: “On at least one side of you it’ll be completely dark,” he says.

However, the most important factor to consider in finding a spot to see the stars is its proximity to a populated area. “What you want, to the highest extent possible, is to get away from lights,” Arion adds.

Light pollution put off by towns and cities greatly interferes with starlight and can diminish the stargazing experience. For those living in populated areas, this may mean having to drive to reach prime stargazing territory. There’s no exact distance from a city that will provide the best stargazing, but the more rural the area, the better.

AMC’s Maine Lodges, located just southwest of Maine’s Baxter State Park, is a good place to start. It sits under some of the darkest skies on the East Coast in an area that could soon become an International Dark-Sky Association (IDA) Reserve, the second in the entire United States. Dark Sky Reserves contain a dark core zone surrounded by an area in which public policy protects the darkness of the reserve.

For a slightly shorter drive for most, Rob Burgess, president of the Southern Maine Astronomers, recommends visiting Bradbury Mountain State Park in Pownal, Maine. This park is easily accessible from the state’s population center—less than half-an-hour drive up Route 295 from Portland—and features campsites and a prime lookout for stargazing.

“Our goal with everything we do is to create environmental awareness from a cosmic perspective,”Arion says. “We’re using astronomy to change people’s perspective about the world around them.”

Wachusett Mountain State Reservation in central Massachusetts is about an hour drive from Boston and is unaffected by the city’s light pollution. For even darker skies, keep heading west along Route 2  and south on Route 32 to the Petersham State Forest in Petersham, Mass., an even darker option.

Though it’s about a four-and-a-half hour drive from Philadelphia or New York City, Cherry Springs State Park in north-central Pennsylvania is one of the few IDA Dark Sky Parks in the Northeast and offers another ideal location for stargazing. Where Dark Sky Reserves have a core and surrounding peripheral to preserve darkness, a Dark Sky Park includes just the public- or private-owned spaces protected for natural conservation and meet the IDA criteria.

Just east of Shenandoah National Park, Rappahannock County Parkoffers “a mini gateway into the historic Virginia Blue Ridge foothills, one of the darkest remaining areas within the Eastern United States,” says the IDA. The park, roughly a 90-minute drive from Washington, D.C, is another certified IDA Dark Sky Park.

If a rural area or IDA-certified area isn’t accessible, simply look for a field or other open space where trees won’t obstruct your view. If traveling to a state park, make sure to check that it’s not closed under COVID-19 guidelines and is accessible after sundown.

What to Look For

After arriving, give your eyes 15 minutes to adapt to the darkness and avoid using any kind of bright, white lights, Burgess says. If you are using one of the night sky apps as a guide, make sure to turn the brightness of your phone all the way down. If you prefer a paper chart, use a red light to see, as it won’t affect your dark adaption. Though not included on smartphones, red lights can be found on many headlamps.

Many of the stargazing apps utilize GPS , which tailors them to your location. They also often include a feature that allows users to point their phone at the sky and have a moving, three-dimensional star chart. “Wherever you’re looking, you hold the phone up and you’ll see that what’s in the sky is on your phone,” Burgess says. “You can explore right there with your fingertips and kind of get yourself oriented.”

When using a physical paper chart or one from a book, make sure that the chart corresponds with the current time of year, as different charts will be used for different seasons. You’ll also want to choose a map that is drawn for your general location. The maps located in Astronomy magazine, for example, are drawn as the stars appear at 35 degrees latitude in the northern hemisphere but will work well for anyone between 25 degrees and 45 degrees north, which includes much of the continental United States.

Orient yourself using the cardinal points on the map using a compass. Then start looking for stars and planets. For example, if you want to find Jupiter, the gas giant hundreds of millions of miles away, follow the charts to identify where it generally is in the sky. You should be able to see Jupiter without binoculars. “It’s going to be the brightest thing in the sky,” Silverman says. “You then lift the binoculars to your eyes without taking your eyes off [it],” and there it is—Jupiter. With binoculars, you may be able to see the planet’s moons, too, he adds.

Also on the horizon this summer is the Perseids Meteor Shower, which comes annually in late July and August and is best viewed in the Northern Hemisphere according to NASA. It will peak in early to mid-August and could produce as many as 100 meteors an hour. Burgess also recommends using Skymaps.com, which publishes a monthly stargazing calendar, to keep up with astronomical phenomena that occur throughout the year.

Arion also says that anyone potentially concerned about the lack of objects they may see from their own home should look at DarkSky.org and read about the causes of and solutions for light pollution. “The reason you don’t see much from the suburbs is because of light pollution,” he said. “And there’s something you can do about it.”

Arion advises people to look at the lighting of their home and to ensure that it’s “no brighter than it has to be and only points down.” After that, he says to work to get your neighbors and business and town to change their lighting and to make sure lights go off when not in use.

If all of that comes together, more of night sky may soon be visible from your backyard.