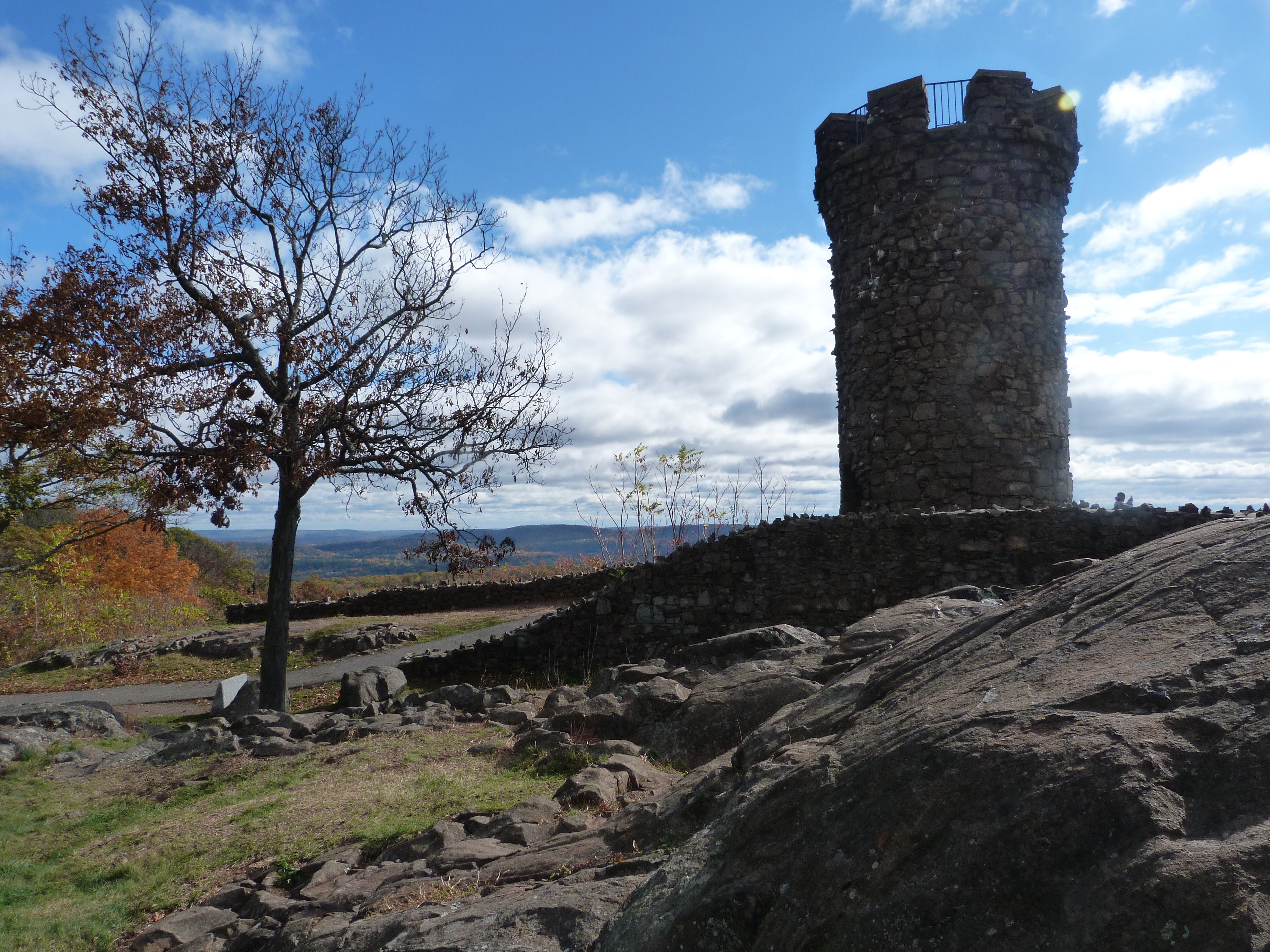 For many hikers, the ideal trail is a remote trail; the farther from civilization the better.

The New England National Scenic Trail (NET) is not that trail.

The 215-mile footpath runs from the Long Island Sound in Connecticut to the Massachusetts-New Hampshire border, passing through some of the region’s most striking vistas and dense forests but also near metro areas like Hartford and New Haven, Conn. and Springfield and Holyoke, Mass. In 2009, the trail was designated by Congress as a National Scenic Trail; putting it in the same category as famed footpaths like the Appalachian Trail and Pacific Crest Trail. A decade on, the classification serves as recognition that top-rate outdoor recreation opportunities can, and should, exist where people live.

Get to know one of America’s newest National Scenic Trails, including how it came to be and what its future looks like. Your new favorite hike may be closer to home than you thought.

The Path to Federal Recognition

While the NET was only recently designated as a National Scenic Trail, the idea for a unified trail system through the region has been around for decades. In the 1950s, Walter Banfield, a University of Massachusetts professor and AMC volunteer, envisioned a footpath that connected Mount Monadnock in New Hampshire to the existing Metacomet Trail in Connecticut. Banfield began designing his dream trail, working with local landowners to connect several existing paths and enlisting volunteers from the Appalachian Mountain Club and other organizations to help build and maintain his new route, the Metacomet-Monadnock Trail.

Despite the best efforts of a large network of volunteers, however, a lack of funding and protection was keeping the trail from fulfilling its full potential as a hiking destination for communities across the region. Many sections of the trail were (and in some cases remain) protected only by handshake agreements with landowners. 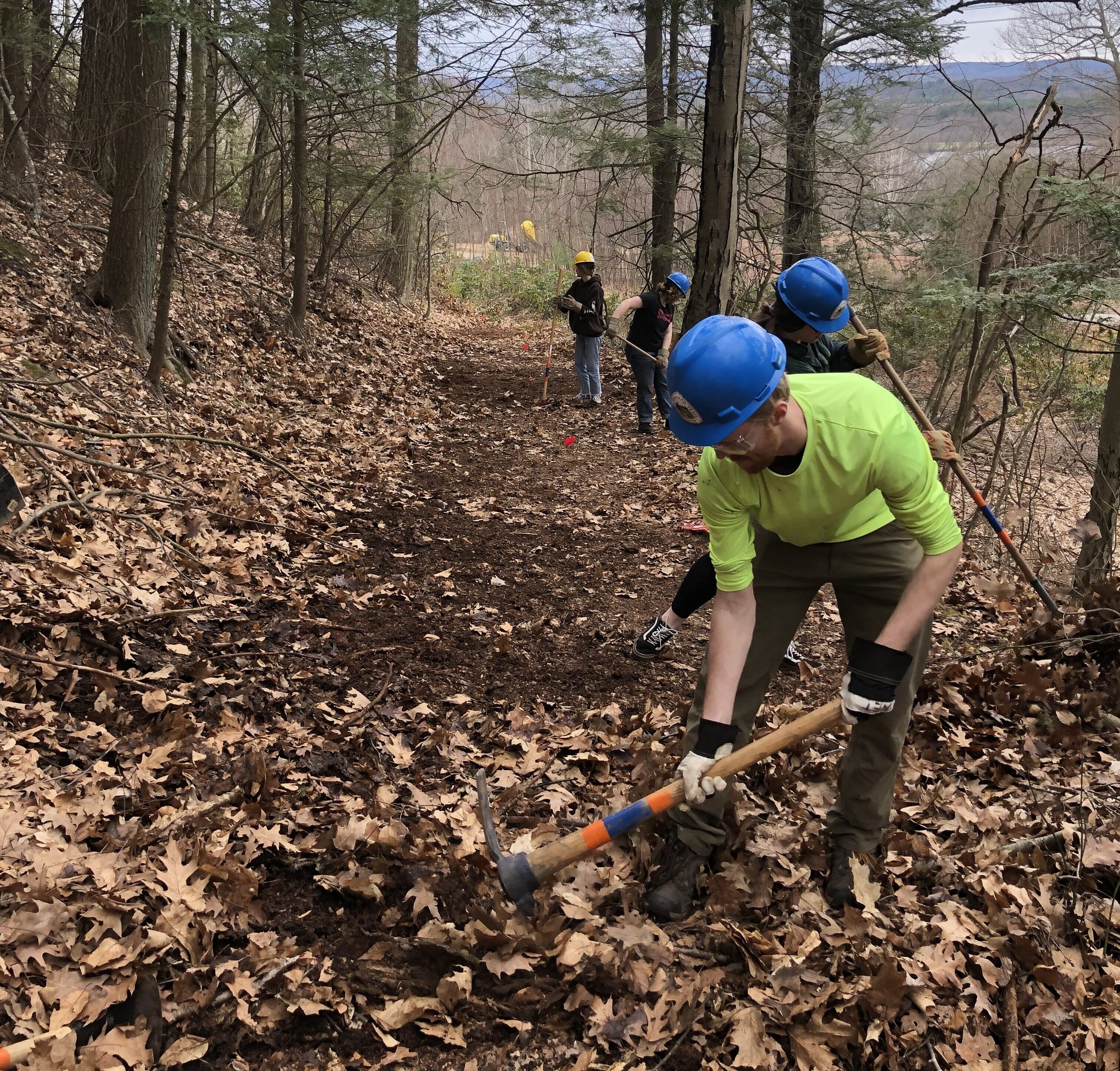 Liam CreganVolunteers from the University of Massachusetts Amherst work on a new trail connection in Easthampton, Mass.

While federal funding and support has had a lasting impact, much of the work of maintaining and improving the NET remains in the hands of volunteers. In 2021, 636 volunteers gave more than 7,000 hours of their time to trail work.

In Massachusetts, where AMC works alongside the National Park Service to maintain the trail, New England Trail Coordinator Liam Cregan works with volunteers to identify priorities, then finds partners and funders for each project, and reaches agreements with any impacted landowners. It’s complex work, and all before any ground on a project is broken.

“I’m the one who takes [volunteers’] dream project ideas and helps make them happen,” said Cregan.

Right now, Cregan is focused on improving the trail’s connectivity and adding amenities like campsites and shelters that make extended backpacking trips and thru-hiking possible. In the past year, AMC has helped to build a new tent site in West Springfield, Mass. and will soon begin construction on a new moldering privy at the Richardson-Zlogar Cabin in Northfield, Mass. Another priority: signage. Many places on the trail are marked as both the New England Trail and the Metacomet-Monadnock Trail, creating confusion for those not familiar with the trail’s history.

“I think a lot of people don’t necessarily know it by name as the New England Trail, which is something we’re hoping to address over time by changing up signage,” Cregan says.

While some of these projects may seem relatively small in scope, they make a big difference for hikers who regularly use the trail and could go a long way towards attracting new users. The infrastructure to support thru hikers could even help raise the trail’s national profile. These projects always need more volunteers, if you’d like to join the NET volunteer community and help make the trail even better.

From Sound to Summits

While accessibility is a big part of the NET’s charm, there’s a reason Walter Banfield worked so hard to construct a trail where he did. The landscape surrounding the NET is as varied as it is stunning. At lower elevations, hikers can take in a mix of forests, wetlands, and vernal pools (shallow, seasonal pools of water). Many of the mountains on the trail are a part of the Metacomet Range, known for its narrow cliffs of trap rock, which has a distinctly dark color and “fractured” appearance.

Some of the trail’s highlights include:

Much of what makes these sites great for hiking, from unique mountain geography to historic sites, can be found throughout the trail. The right place to hike on the New England National Scenic Trail is wherever you can find a trailhead. 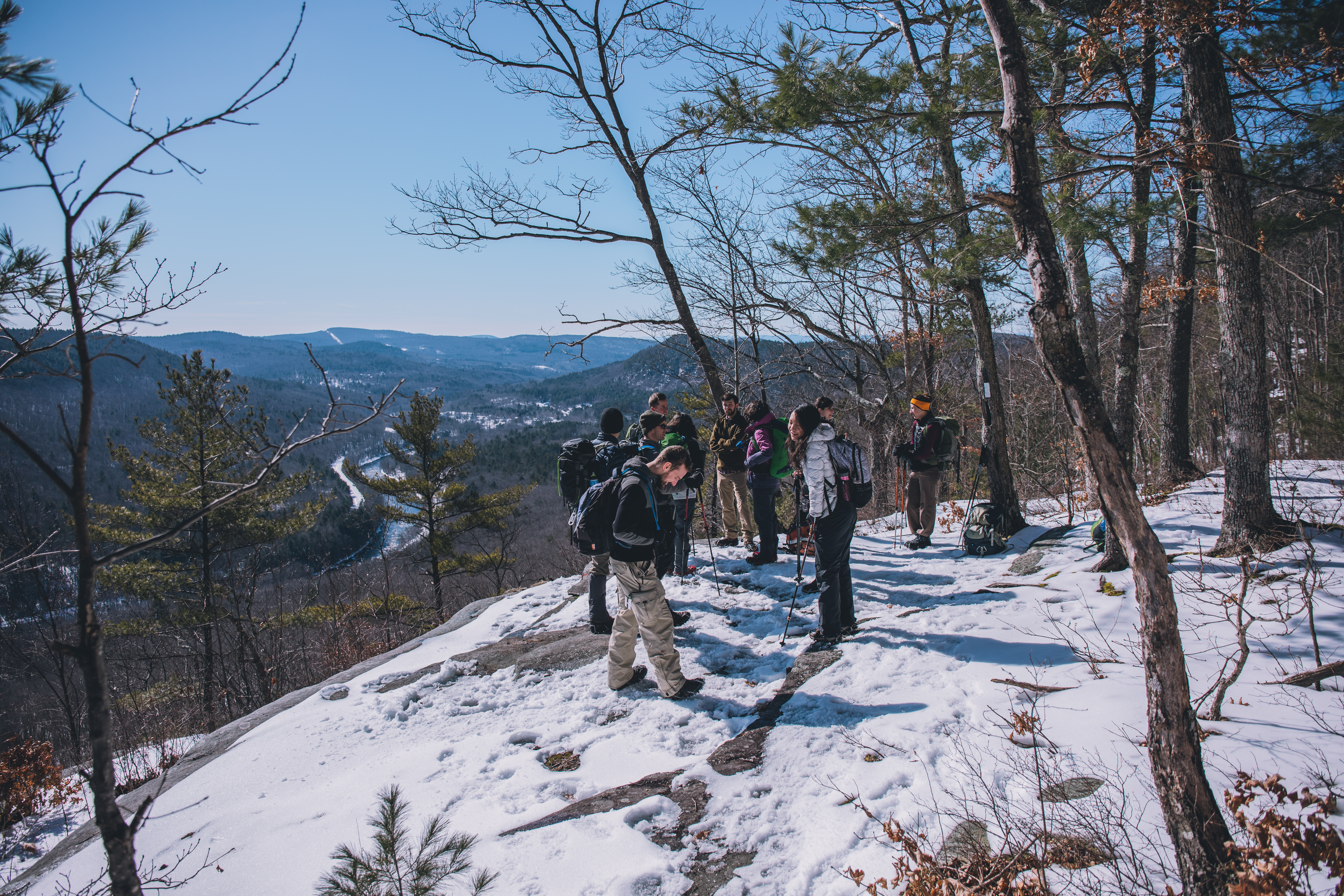 Paula ChampagneMembers of the AMC Worcester Chapter hike on the NET near Erving, Mass.

With so much to offer, it’s no wonder the New England Trail, once something of a hidden gem, isn’t so hidden anymore. When the COVID-19 pandemic began in early 2020, trail use across the country exploded, as many sought outdoor, COVID-safe activities. According to data from the Rails-to-Trails Conservancy, trail use spiked 79 percent during the first few months of the pandemic alone. Hiking on the NET seemed to match the trend, with volunteers reporting busy trails and packed parking lots.

As life has largely returned to normal, trail usership has remained high. One of the ways NET organizers have worked to build enthusiasm and visibility for the trail is through an annual Hike Challenge. Beginning in 2018, in honor of the 50th anniversary of the National Trails System, the trail association began offering completion patches to anyone who hiked 50 miles on the trail. The challenge was so successful that a 100 Mile Challenge was later added. In the four years since its introduction, hikers have completed a reported 63,200 miles. Participants can also share pictures and stories from their adventures on social media with a variety of hashtags.

With usership up, the need for continued federal support remains. In October 2021 Senator Tammy Baldwin of Wisconsin reintroduced the National Scenic Trail Parity Act to and in June 2022, Representative Mark Pocan of Wisconsin introduced the Parity Act in the House. If passed, the bill would increase access to funding for maintenance and other management activities for three National Scenic Trails, including the NET. The bill is supported by the Appalachian Mountain Club and several of our partner organizations around the country.

And while more hikers can mean more challenges, like human-made erosion, the trail’s location gives it the potential to introduce many people to the joys of hiking. Cregan views this as a major asset, rather than something that takes away from the outdoor experience.

“One of the things that really sets [the NET] apart is that it passes through development,” Cregan explains.

He recounts a recent trip to the tent site in West Springfield, Mass., an area of the trail that abuts both a quarry and a summer camp.

“Except for some of the noise from the quarry and some lawnmowers, you’d kind of just be like wow, I’m in the middle of the woods, and I think that’s one of the coolest things about the trail is that it’s just this little string in between all these pretty developed areas, but it feels pretty wild at the same time.”