Trail Running on the Bay Circuit Trail in Lincoln, MA 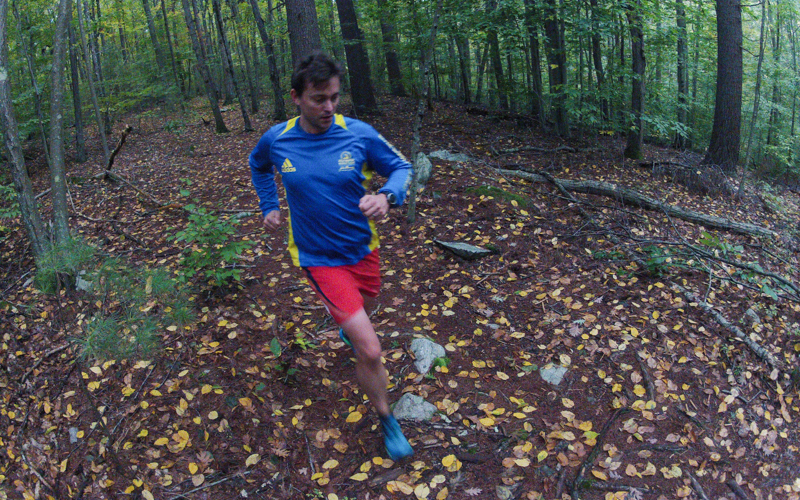 I don’t know about the “runner’s high.” It sounds too definitive, too… good. Don’t get me wrong—I’ve had amazing training runs, workouts, and races where everything felt easier and nothing hurt quite as much as usual. But these exist on a spectrum, not an on/off dichotomy of “high” and “not high.” With that said: The runs at the “high” end of that spectrum make all the “lows” worth it. On a recent run in Lincoln, Mass., I had one of those highs.

A couple weeks ago I spent a morning at Mount Misery, a small property located a couple miles south of Walden Pond. I packed a 4-mile trail run into the spiraling trails there, but could tell from all the side trails that there was more to explore. So that’s where I headed, parking on Old Concord Road near Lindentree Farm. I picked up on the outskirts of my previous run and followed the Bay Circuit Trail(BCT) blazes across Concord Road and into the forest to the east. My plan was very different this time—I wanted to see how many properties I could thread through before making it back to the car.

The beauty of the BCT is that it provides the connections you need to get from one piece of public land to another. On this 5-mile loop, that meant crossing roads, passing down driveways, and, it seemed, cutting through an occasional backyard. At one point I was looking up a hill at Gropius House, a couple miles later I ran past a tennis court someone had constructed in the middle of the woods. The trails varied from narrow and winding to broad and straight, but almost all were gilded with the first signs of fall—bright yellow birch leaves.

I’d planned to go 2 or 3 miles out and then cut back to the car on Concord Road if I was tired or a nagging injury had flared up. But I wasn’t, and it didn’t. So I just kept running, not really feeling the effort. I ran through Codman North, traversed the edge of Sandy Pond Trust, cut across Pine Hill, skirted the southern shore of Walden Pond, and only there veered off the BCT. Where it continued north, I cut west into Adams Woods and wound my way back to Mount Misery. Side trails beckoned at each property, but they’ll have to wait for another day. Though I felt like I could’ve kept running, the loop came to a natural end as I emerged at Lindentree Farm again.