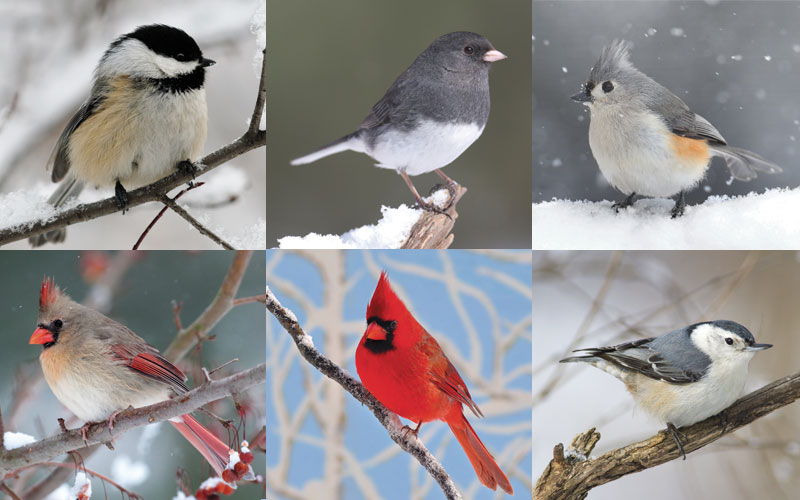 Thousands of birds migrate to warmer climates every fall, but not every species packs up ship and leaves New England. Some overwinter in the region, despite the cold temperatures and lack of food.

Hang a bird feeder filled with seeds and suet blocks in the fall for migratory birds to enjoy, then watch as winter sets in and resident birds stake out this critical food source. Water is also important—and here, too, you can help. Most birds get their fill in summer by eating insects, but in winter, birds must find other ways to hydrate. One cheap solution is to buy a heater for your birdbath that prevents water from freezing on even the coldest days.

Replenish these food and water caches throughout the winter, and you’re bound to meet some of the following birds that call New England their year-round home.

1. Black-capped Chickadee
Massachusetts’ state bird, this social chickadee feeds in flocks. Weighing no more than a half-dollar, chickadees stay warm in winter by puffing out their down feathers to create space between their bodies and the cold air. Look for them in the protective cavities of standing dead trees, called snags.

2. Dark-eyed Junco
Not afraid to frolic in the snow, juncos tend to forage for food on the ground but will eat directly from a feeder if their favorite food, sunflower seeds, is available. Easy to identify, males have black backs, tails, and wings with a white belly, and females have a mixture of brown in their black capes. Juncos prefer to nest in mixed woods with an understory of varied brush and open areas or mature coniferous stands.

3. Tufted Titmouse
In winter, titmice flock with chickadees and other small songbirds. It’s difficult to determine the sex of titmice, as males and females look strikingly similar. Both have gray bodies, rust-orange flanks, gray tufts, and black patches above their short beaks. Their habitat of choice is deciduous and coniferous woodlands, where they nest in dead and downed trees. Titmice usually take one seed at a time from a feeder and, after shelling it, store it nearby for later.

4. Northern Cardinal
These conspicuous birds have an appetite for seeds and will frequent home feeders if food is replenished often. Males sport a brilliant red coat year-round, while females are an elegant earthy brown with notes of red in the tail, wings, and cap. Both sexes have bright orange beaks, perfect for cracking open seed casings. Cardinals are more vocal in spring and summer than in winter but can be heard piping to each other when living in pairs.

5. White-breasted Nuthatch
Often banding together with titmice and chickadees for protection and to locate food, nuthatches rely on home feeders in winter when their preferred menu of insects isn’t available. Like titmice, nuthatches store food in trees during late fall to prepare for winter. Males have a black crown and nape, a blue-gray upper body with black and white streaks, a white face and breast, and often a chestnut-colored lower body and tail. Females look similar in shape but are duller in color, with a lighter crown.

How To Be More Feather Friendly
Follow these tips to aid and attract overwintering birds: