The number of New Hampshire peaks over 4,000 feet is thought to be 48, but according to AMC cartographer Larry Garland, that count could change.

If you’ve hiked in the White Mountains over the last twenty years, there’s a good chance that the maps of Larry Garland were guiding you. For over two decades, this veteran of the Appalachian Mountain Club (AMC) has surveyed every trail in the National Forest; the data he has collected has been transformed into hundreds of outdoor recreation maps for visitors. In 2018, Larry began work on a new project that has already produced surprising results. At least one 4,000-footer in New Hampshire is less than 4,000 feet! As the project progresses, there may be more unexpected findings. His journey to this discovery began over thirty years ago. 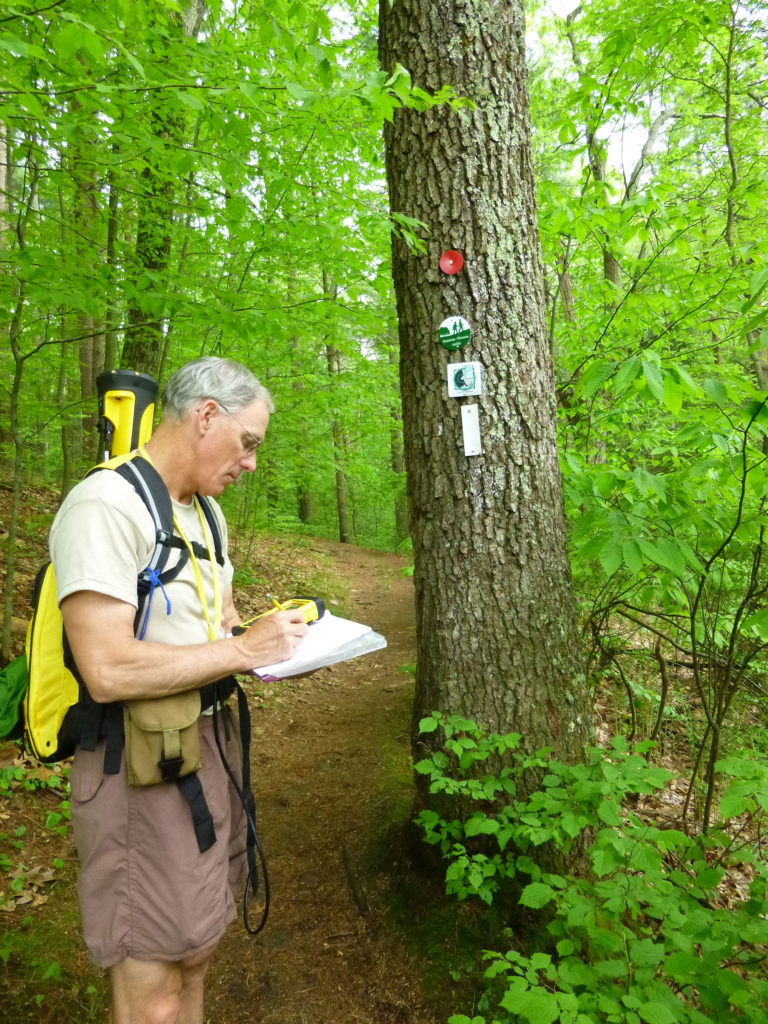 When Larry Garland began attending Appalachian Mountain Club chapter events in the 1980s, no one could have imagined the impact he would have on the organization in the decades to come. At the time, Larry was working as an IT professional in Boston. He liked hiking and joined AMC to explore more outdoor recreation opportunities. Before long he found himself immersed in a new community, eventually leading and directing chapter programs.

“My favorite trail is the one that I’m currently on,” Larry said. “Every trail has its own secret and the adventure in hiking is discovering each trail’s secret.” 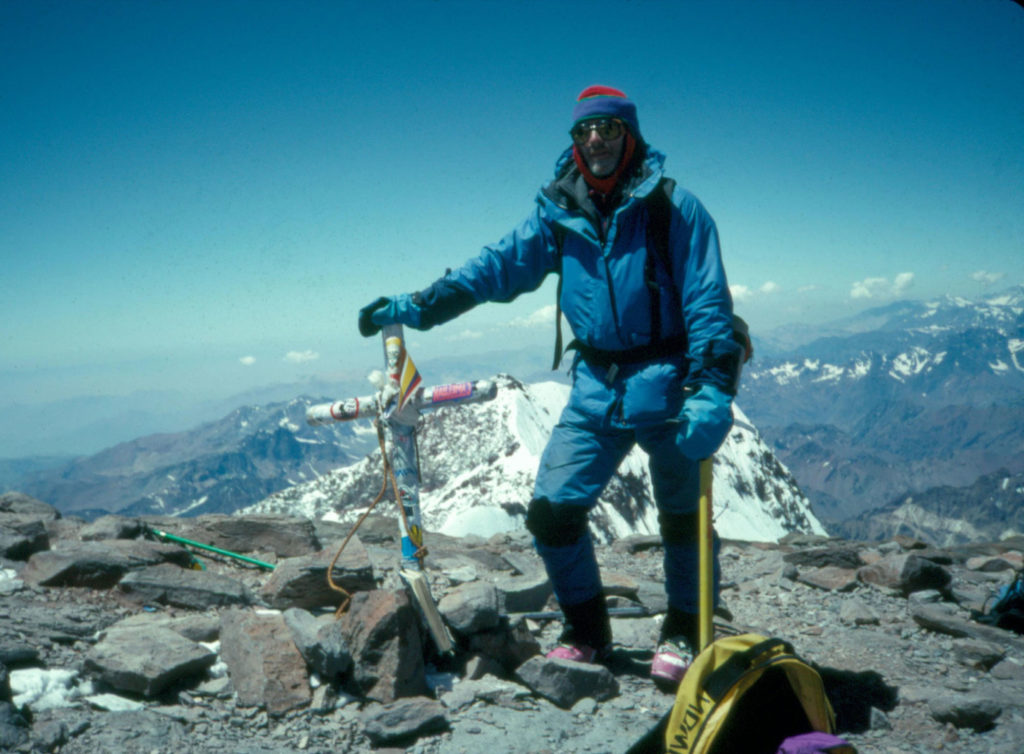 Larry on the summit of Aconcagua in February, 1993

As Larry’s enthusiasm for club activities grew, so did his hiking ambitions. He left his job and started traveling around the world. During this time, he summited Argentina’s Aconcagua (22,841ft), Tanzania’s Kilimanjaro (19,341ft), and Alaska’s rugged Denali (20,310ft). “My favorite trail is the one that I’m currently on,” Larry said. “Every trail has its own secret and the adventure in hiking is discovering each trail’s secret.” After four years of high-altitude trekking, Larry returned to the Northeast in pursuit of a new career. 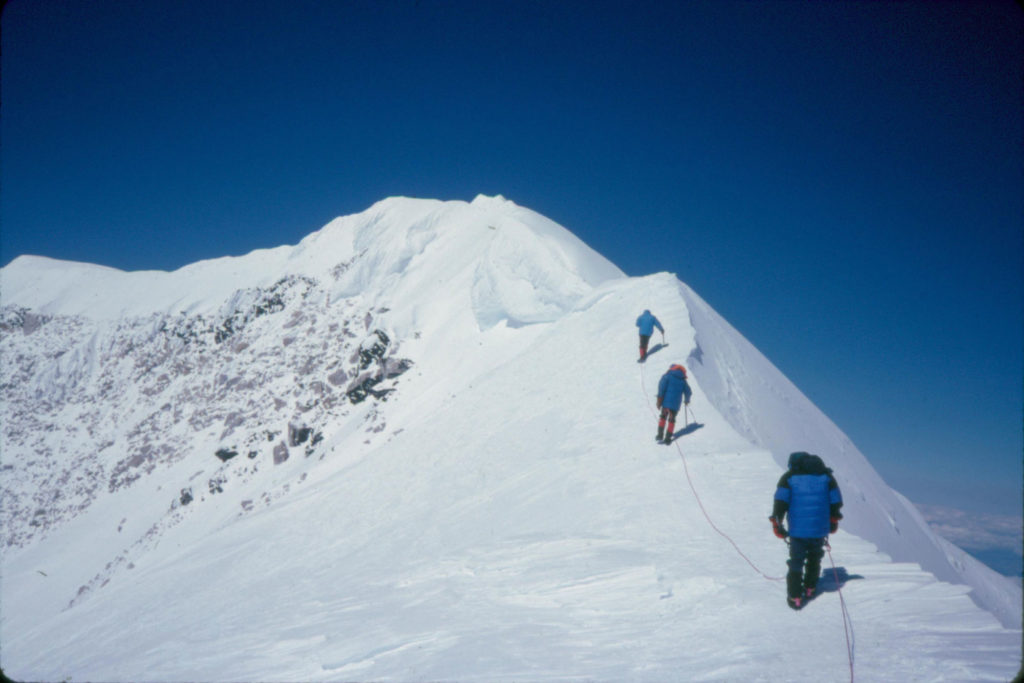 Larry hiking the ridge leading to the summit of Denali in June, 1995

While browsing through a copy of AMC Outdoors magazine, he read about conservation work being done for the Northern Forest Land Study. Inspired by the project, he boldly cold-called AMC’s then Director of Research, Ken Kimball, to ask for a job. While there were no positions available initially, Kimball eventually hired Larry part-time to do conservation research.

Larry began to notice how the technology and data he used for his work at AMC could be applied to improve the existing maps of the White Mountains. At the time, digital maps for recreational consumers were not yet in use. Larry saw this as an opportunity; he wrote a business plan for his idea of replacing conventional maps with digital ones and was later hired for the job.

“When I am creating the map, I am seeing in my own mind: the trail as I hiked it, the views as I saw them, the weather that I experienced. That’s one of the great things about being able to do this first hand.”

Larry did not think that the data of the hand-drawn maps of the White Mountains were accurate enough. Over the course of two years, he and multiple interns hiked every White Mountain trail while carrying differential GPS equipment. Larry enjoyed this hands-on process:  “When I am creating the map, I am seeing in my own mind: the trail as I hiked it, the views as I saw them, the weather that I experienced. That’s one of the great things about being able to do this first hand.” The GPS data was used to create updated maps beginning with the 26th edition of the White Mountain Guide in 1998.

Twenty years later, Larry continues to be a driving force of innovation in the mapping community. Last year, he started working with light detection and ranging (Lidar) data to remap the White Mountain National Forest. Lidar is a modern tool used to survey land, and the data is recorded and made publicly available by the United States Geological Survey. Lidar provides much greater accuracy in measuring topography such as summit elevation.

Larry began comparing the new elevation data collected with Lidar to the previous estimates for each 4,000-footer in New Hampshire. To date, he has evaluated 26 of the 48 mountains whose elevations are considered to be 4,000 feet or higher. Tecumseh, a mountain previously recorded as 4,003 feet, now clocks in at 3,995 feet. As Larry’s research continues, more discrepancies may be uncovered.

Currently, the Lidar data surveying the remaining areas of the White Mountains is not yet available to the public. Once this data is released and Larry is able to finish his work, we will post an update of his complete findings!

The Bluebird Chronicles: A Catskills Romance