In Land We Trust: A History of AMC Land Protection 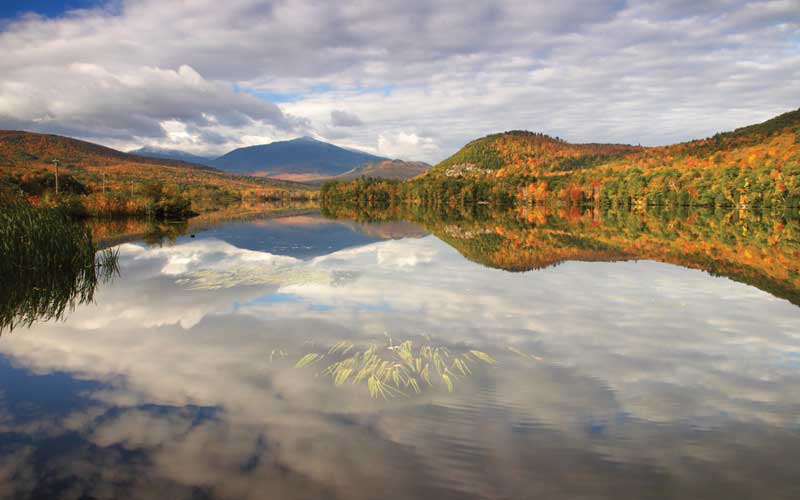 Jim SalgeAMC conveyed its Lead Mine Bridge Reservation in Shelburne, N.H. to the State of New Hampshire in 1936.

Dear Mr. Mann—
I have in my head a scheme for an attempt at preserving some of the finest bits of Nature near Boston. I want, if possible, to interest you…

Charles Eliot, a young Boston landscape architect, wrote those words to Appalachian Mountain Club President George C. Mann on March 5, 1890. Eliot, AMC’s newly elected Councilor of Topography, imagined a new system of conservation, with trustees holding land of particular beauty for the public good, like the trustees of a museum managing an art collection. The events that followed his letter created a legacy of AMC land protection in Massachusetts and inspired the development of conservation efforts internationally.

Eliot and his AMC colleagues pressed on, supporting other conservation plans. In 1892, Massachusetts created the Metropolitan Park Commission (which later merged into the agency now known as the Department of Conservation and Recreation). The Middlesex Fells and Blue Hills, large reservations north and south of Boston, were protected within the agency’s first year. AMC also successfully lobbied Massachusetts and New Hampshire legislators to create laws allowing an organization to hold land in the public trust, tax-free.

Others were watching Massachusetts. New York created the American Scenic and Historic Preservation Society; England modeled its National Trust for Places of Historic Interest or Natural Beauty after The Trustees of Public Reservations. Though he died at age 38 in 1897 of spinal meningitis, Eliot saw much of his vision realized during his short life.

For the Public Good
While urging state agencies to protect land, AMC also took direct action. Over three decades, AMC acquired 18 properties in New Hampshire, Massachusetts, and Maine through bequest, lease, and purchase, which it protected for public use. Most were small, ranging from 4 to 40 acres, but represented areas of particular scenic beauty and included mountain summits and uncommon forests. “It will not be long before the Club will be generally recognized as the natural custodian of wild and forest lands to be held in perpetuity for the benefit of the public,” AMC’s Trustees predicted in 1897.

The organization’s first property had come in the form of a gift, in 1888, from Brown’s Lumber Company—1 acre on the shoulder of Mount Madison, where AMC built its first hut. In 1894 AMC created its own group to manage land, the Trustees of Real Estate. One year later the organization purchased a half-mile corridor, 600 feet wide, on Mount Madison, along Snyder Brook. The purchase was spurred by fears that the owner would harvest timber there. “Without immediate action on our part, the beauty of the surroundings of the Madison Path would be largely, if not altogether, destroyed,” AMC’s Trustees reported. “It is an auspicious beginning, though on a small scale, of a work which we trust will reach much larger dimensions in the near future.”

In Shelburne, N.H., AMC received three gifts of land near Lead Mine Bridge. The Joseph Story Fay Reservation, 150 acres in Lincoln and Woodstock, N.H., was described as “a most valuable and attractive pleasure ground.” In 1903, AMC took on what was then its largest property, 300 acres in Fitzwilliam, N.H., where the largest-known natural rhododendron bed in New England spread over 10 acres. Though The Trustees of Public Reservations was protecting land in Massachusetts, their charter limited them to acquiring land already endowed with a maintenance fund—a restriction that AMC didn’t face. One such property was a 20-acre parcel in Carlisle that held a grove of massive 120-foot-tall pine trees.

Though gifts of land were coming from throughout New England, AMC’s focus was often trained on the White Mountains, where timber harvesting progressed at an alarming rate. “The paths in this region have been seriously injured, especially the Valley-way,” the Trustees reported in 1907. To protect two iconic spots, AMC leased 28-acre parcels around Glen Ellis Falls and Crystal Cascade from a paper company for $10 per year. Small parcels at the summits of Kearsarge North, South Baldface, Black Mountain, and Pack Monadnock were also acquired.

Land ownership inspired some of AMC’s early conservation advocacy campaigns. These included efforts to prevent damming of the Saco River in Maine, which would flood much of the Cyrus Woodman Reservation in Buxton, Maine, and halting construction of a power-line corridor that would have cut through Fay Reservation.

Talk of a “White Mountain Reservation” gave AMC leaders hope that larger tracts would be protected eventually. “We have made certain recommendations to the Forest Service of the United States relative to some areas which should be taken because of their scenic beauties,” the Trustees reported in 1907. The 1911 passing of the Weeks Act made that a reality, and in 1917 AMC relinquished its leases on Glen Ellis Falls and Crystal Cascade to the Forest Service.

A New Era of Land Protection
In a quarter-century the conservation landscape had changed radically from the dire situation that first motivated Charles Eliot. By the 1920s, the Massachusetts Department of Conservation was managing reservations and wildlife refuges, and had acquired more than 100,000 acres of state forestland. In 1925, AMC, Mass Audubon, and other organizations collaborated on an extensive “Needs and Uses of Open Spaces in Massachusetts” study, and urged even further expansion of the state’s park system. In New Hampshire, the creation of the White Mountain National Forest had guaranteed the protection of a vast tract of land, which AMC members had long explored. Local, state, and national agencies as well as private organizations were now actively protecting land for public use.

“There will probably be no occasion for any additional acquisitions by the Club, unless in some very exceptional case, to preserve something of high value which could not come within the province of the State or the Nation,” the Trustees wrote in 1918. With the exception of the gift of 10 acres on Ragged Mountain in Camden, Maine, they spent the next 15 years managing their existing properties and continuing to evolve the hut system.

Reports from AMC’s Trustees of Real Estate, printed in the back pages of Appalachia each year, chronicle the challenges of land management. Immediately AMC had to maintain roadways and trails, cut firebreaks, and navigate relationships with neighbors often focused on profiting from their land. They paid taxes and insurance, dealt with vandalism and litter (“unprincipled trampers” and “untidy picnickers” were two early culprits). On the Woodman Reservation, they noted, “hunters…take a delight apparently in shooting the signs to pieces.” Invasive species, including gypsy moths and red rust, posed a constant threat, as did highway and utility development. Sparks flying from passing locomotives threatened some properties, floodwaters threatened others. The trespass of grazing cattle and timber thieves also had to be managed. AMC officials feared the proximity of a golf course to Fay Reservation because “so many of the players smoke and are careless.” AMC cut and sold hay and selectively harvested timber to offset some of its expenses.

In 1933, the Trustees of Real Estate decided that AMC was no longer the most qualified entity to manage all these lands. They recommended that the club transfer its New Hampshire and Massachusetts properties to state and national agencies, and to follow suit in Maine once a suitable agency was established there. The Snyder Brook, Walter Davis, and Baldface Clay reservations were transferred to the U.S. Forest Service. The State of New Hampshire accepted Lead Mine Bridge, Farrar, Fay, Rhododendron, and Sky Pond reservations for its state forest and park systems. Parsons, Carlisle Pines, and Gilson Hill were transferred to Massachusetts’s park and forest agencies.

At the same time, AMC did make select purchases of destinations that have remained popular with members for decades. They began purchasing land on Mount Cardigan in 1934, eventually acquiring 1,200 acres, and bought a parcel at Cold River Camp in 1937. Additionally, several AMC chapters acquired camps, including Noble View in Russell, Mass., and Fire Island on Long Island. These, along with Three Mile Island, the 1-acre plot on Mount Madison, and several other small properties, remain with AMC to the present day. Yet nearly seven decades passed between AMC’s divestment of its reservations and its decision to make an unparalleled investment in land.

Landscape Scale
Purchasing land in the Maine Woods—37,000 acres in 2003 and an adjacent 29,500 acres in 2009—represented a return to AMC’s conservation roots. AMC leadership decided to investigate developing a recreation network, possibly like the hut system, on its own land. Eventually, the organization decided on the Maine Woods, near Moosehead Lake. Even in the famed 100-Mile Wilderness land was threatened by development. When International Paper put its 37,000-acre Katahdin Iron Works parcel on the market, AMC was poised to make its largest land investment ever. The purchase launched AMC’s Maine Woods Initiative (MWI), a plan for land conservation that combines outdoor recreation, resource protection, sustainable forestry, and community partnerships.

“We wanted to see: Can we use our long history of backcountry management, research, and education, and put all those things in one place,” says Walter Graff, AMC’s senior vice president. “In some ways this was a logical progression of all these areas we had developed—all those departments—all working on one project in one place. All those lessons we’d learned over 130 years, we put to use in Maine.”

Remarkable similarities exist between AMC’s current land management strategy in Maine and that which it used a century ago. While the scale is vastly different, many of the same challenges exist. To meet its goals, AMC has to draw on its strengths while also developing new skills. Both then and now, selective timber harvesting, done in a way that allows the forest to continue maturing, offset some of the costs of land ownership. To maintain public access, roads and bridges must be maintained, and trail networks built. Even environmental research has been a constant. In 1929, researchers from Harvard established study plots on the Carlisle Pines Reservation. Today, AMC’s own research staff monitors plots on portions of the Maine land the organization has set aside as ecological reserves.

Steve Tatko, AMC’s MWI land manager, oversees the infrastructure behind all of those uses. He spends much of his time in the woods planning upcoming projects and checking in with crews on the progress of current work. His responsibilities echo much of what the organization did when it owned land in the early 1900s—just on a much grander scale.

“There’s definitely a seasonal flow,” Tatko says of his work. “We might have five to six or even 10 different crews working on the land at the same time doing different tasks.” These range from trail building, timber harvesting, stream restoration, and road and bridge maintenance in the summer, to trail grooming in the winter. The spring mud season, when navigating the property’s dirt roads is difficult, is when much of the year’s planning takes place.

“My job is to carry out AMC’s conservation-recreation-education objectives on a landscape scale. Those three focus areas are embedded in all of our management plans,” says Tatko, who is from Willimantic, Maine, just south of AMC’s property. “From growing up in an area where we’ve seen a lot of turnover in land ownership, it’s good to see a long-term vision.”

The Towering Mapmakers: Mount Washington and the Early Efforts to Map the White Mountains