It seems appropriate to share our annual Photo Contest winners just as winter gives way to spring. As the views we see outside our windows and along the trail begin to change, we’re excited to look back at the last year’s vistas and adventures. So excited, that we’re sharing six extra entries that didn’t win awards but are still some of our favorites because of how they capture the spirit of the contest.

Among the winners this year, you’ll notice that winter’s desaturated canvas dominates the Outdoor Adventure category. Amidst familiar landscapes distilled to their most essential elements, these photographs captured the dual intensity and tranquility of being outdoors during the Northeast’s most notorious season. Just when we thought we were ready for warmer weather, these photos have left us longing for more snowy days on the mountain.

This year’s Grand Prize winner manages to encompass everything we love about adventure photography. Grasping beyond sharp focus, stellar composition, and a captivating subject—both the climber and Acadia’s perennially awe-inspiring Otter Cliffs—photographer Greg Molica reaches out towards something less tangible but even more powerful. The image of this climber, confidently isolated between water and rocks, reminds us that even amidst the most turbulent times we can still find moments where it feels like it’s just us and the outdoors. 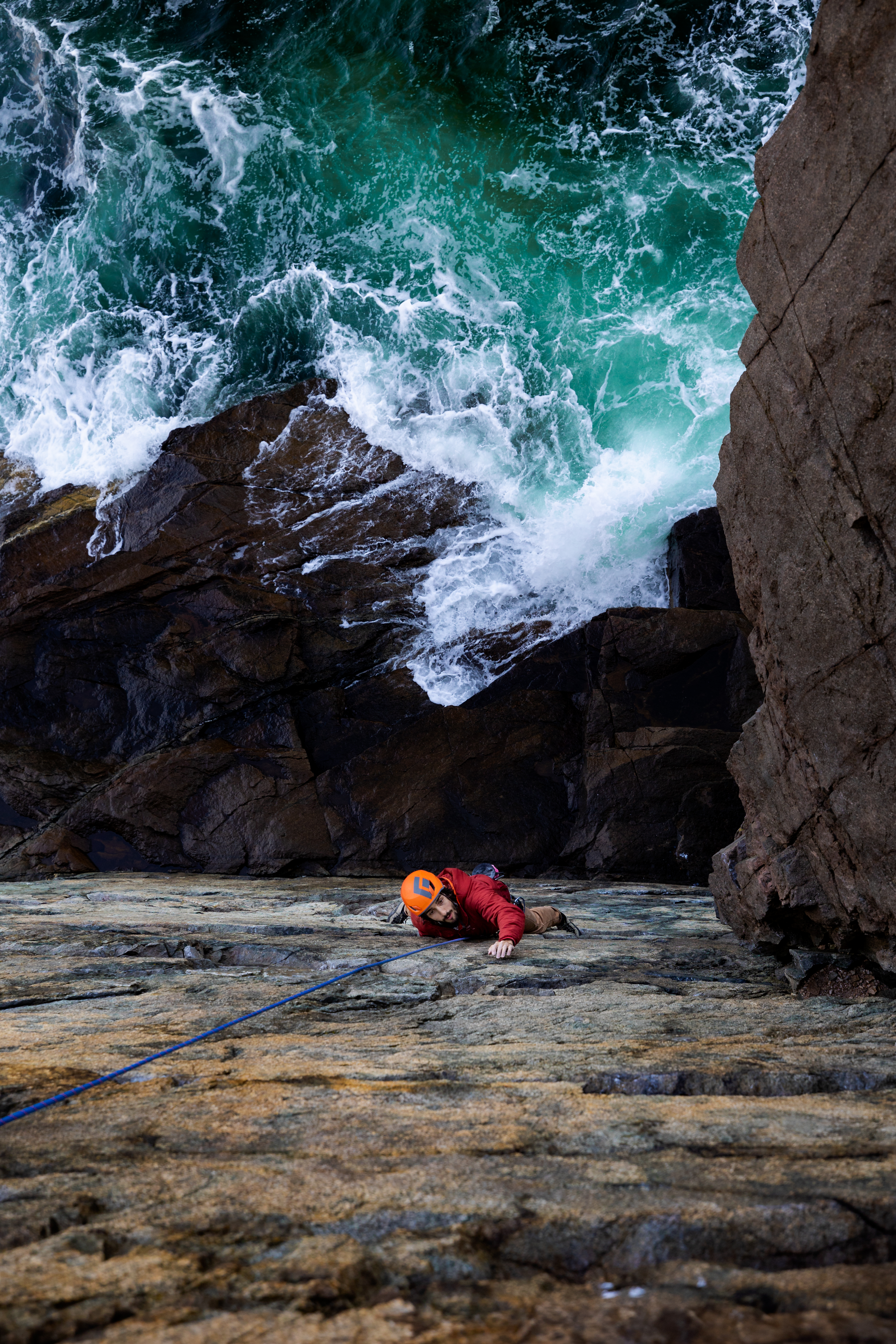 Grand Prize | “Of Water and Rocks” by Greg Molica

We’ve been excited to see an uptick in climbing submissions in recent years. Last year’s 1st Prize Winner in the Outdoor Adventure category by Sonia Szczesna set the bar high, but the dramatic backdrop to this climber’s ascent pushed this shot straight to the top. We were floored by the texture of the foam on the surging tide and the weather-battered cliffs, not to mention the climber’s chalky fingertips grasping at the granite. 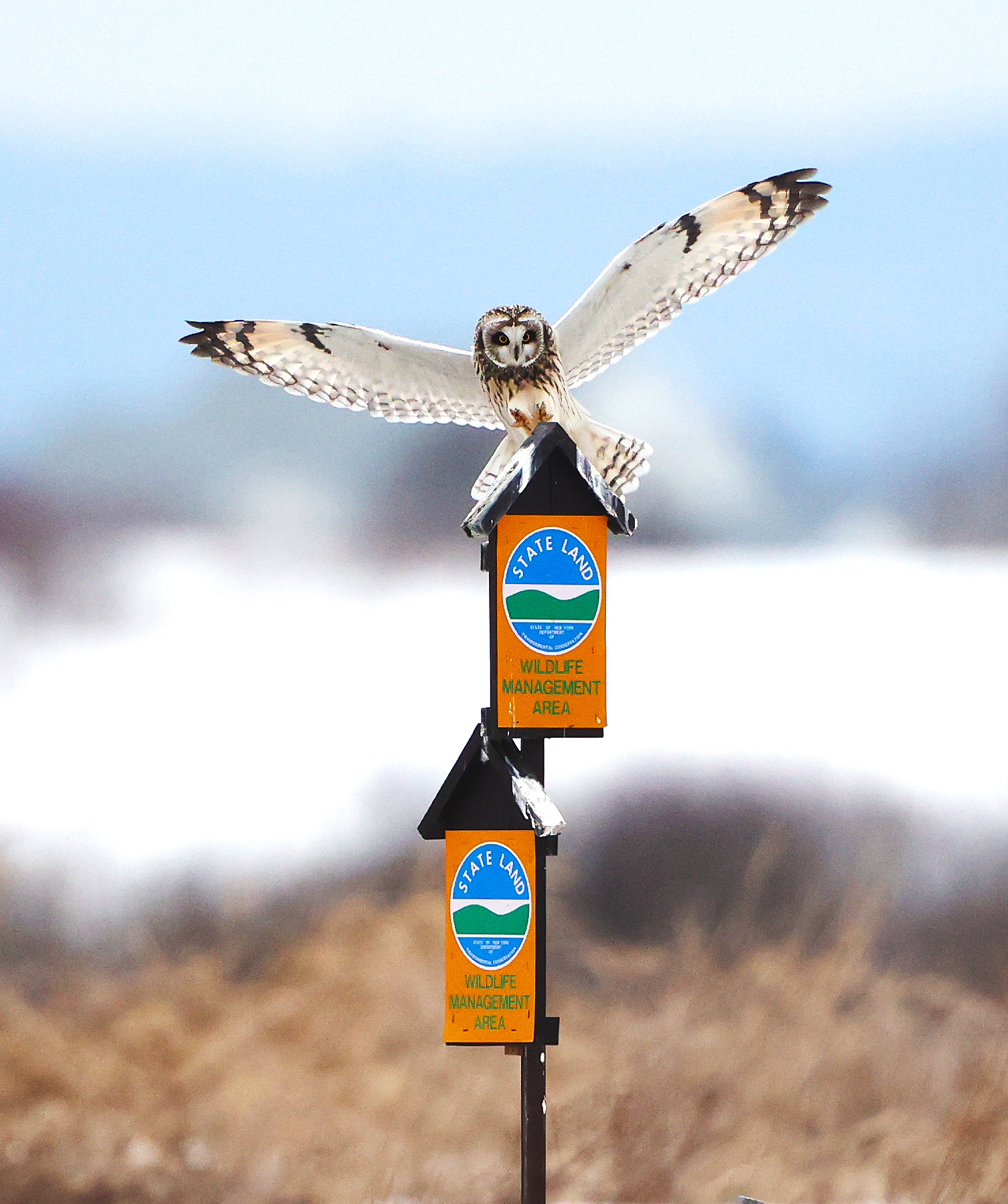 It’s always a thrill to see something as elusive as an owl captured in its full glory, from wingtips to talons, but we were just as taken with the conservation story behind this photo. Photographer Don Polunci’s local Audubon Chapter, the Southern Adirondack Audubon Society, helped save the tract of grassland this owl calls home from development. More than just a convenient perch, the New York State Wildlife Management boundary sign in this image is an instrument of protection for this owl and other threatened species.

On the day photographer Matt Grymek set out to hike Old Speck in Grafton Notch the mountain was enveloped in the kind of bitter cold that steals your breath and saps any electronics’ battery life. During one of the brief moments his camera was working, Grymek caught his brother breaking trail just ahead of him. 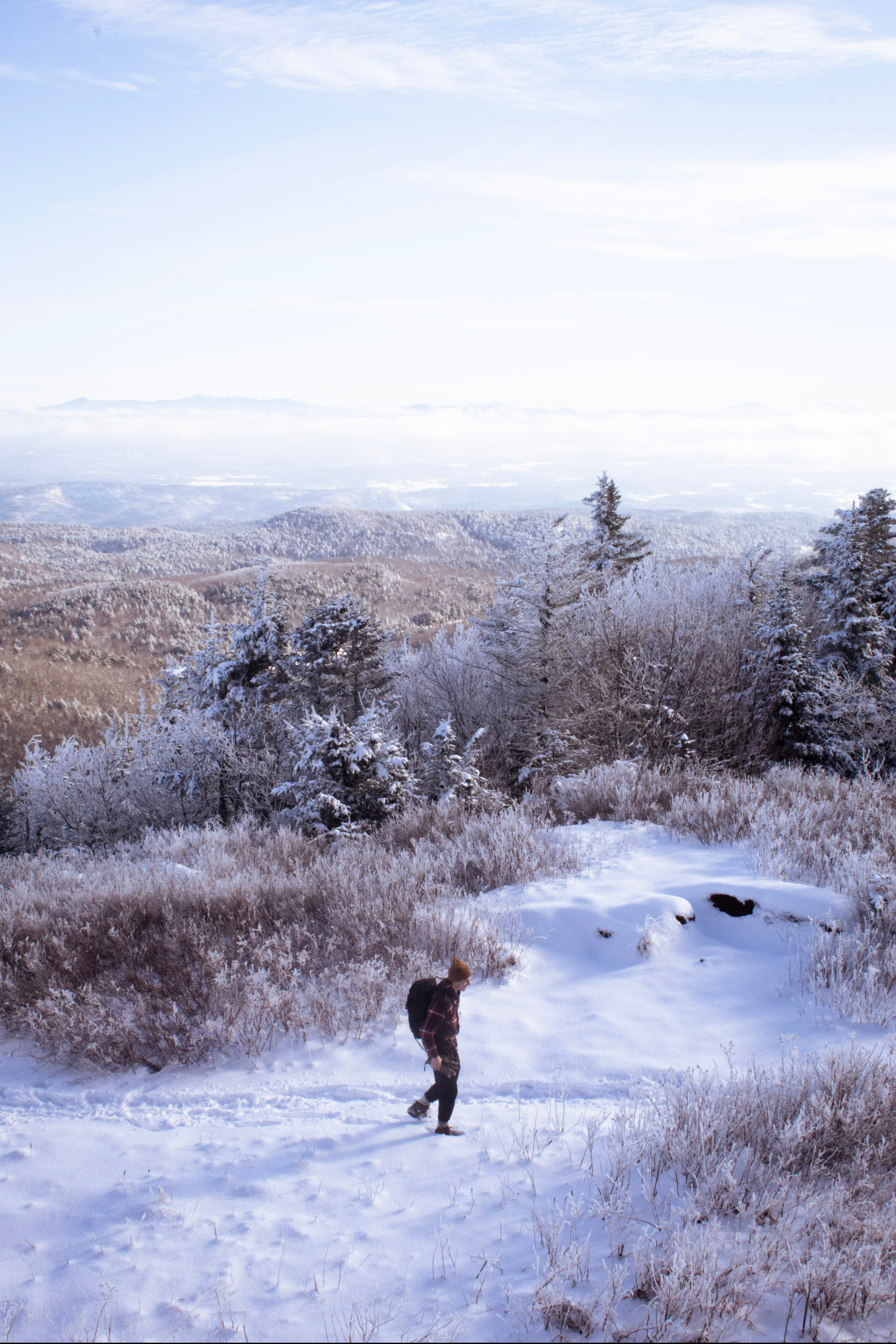 During the winter months, many of us hit the trail in pursuit of the peaceful, restorative qualities of being outdoors. With fewer hikers heading to the summits, the sense of solitude deepens, and a particular tranquility takes hold. This photograph’s muted tones and meditative composition perfectly encapsulate that feeling. 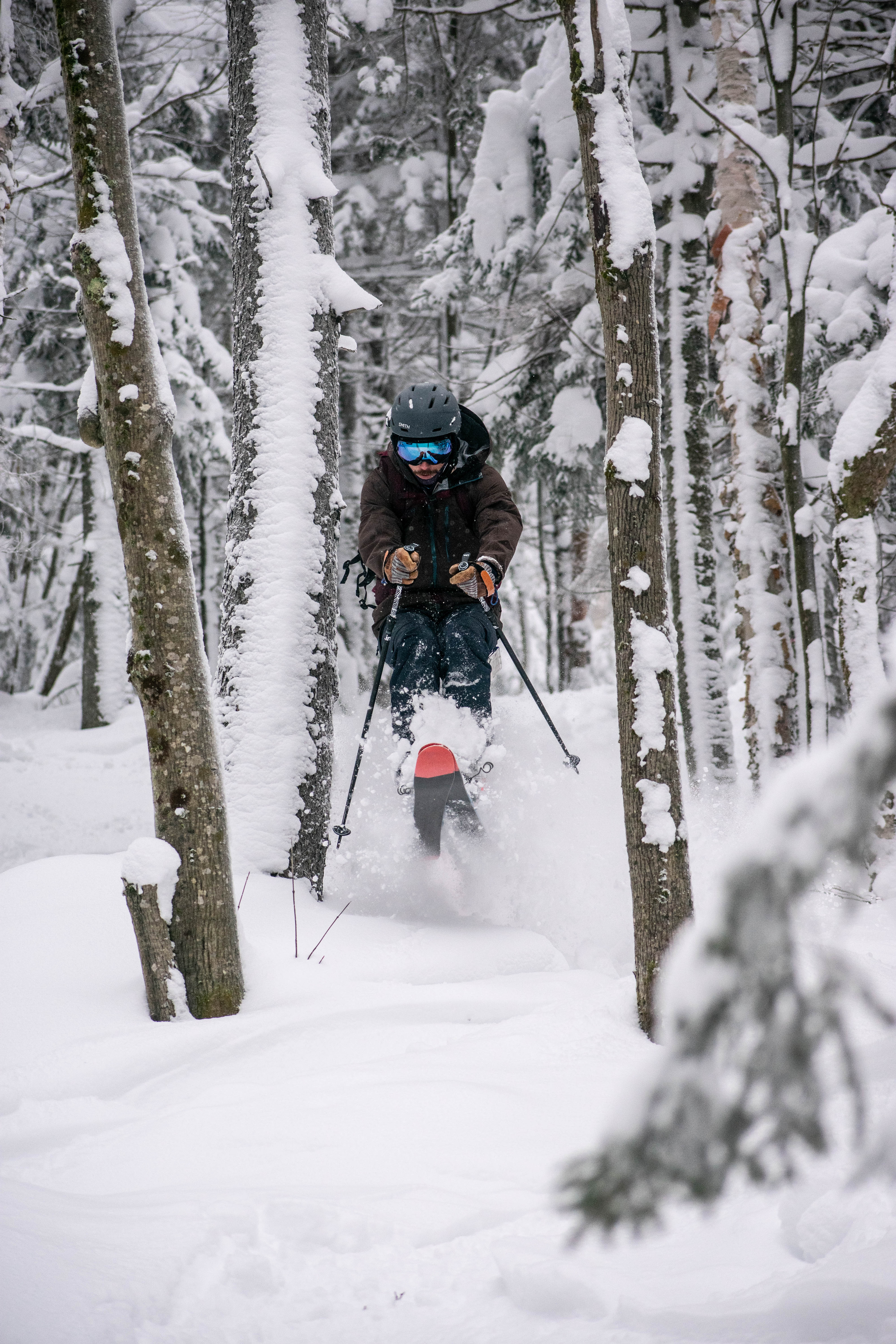 3rd Prize, Outdoor Adventure | “Weaving Through Trees After the Storm” by Scott Stevens

We’ve received some outstanding backcountry skiing entries in the last few years, but Scott Stevens’ image brilliantly captures the intensity and precision of this sport. Look closely and you’ll see that the reflection in the skier’s goggles shows the narrow gap between the trees ahead. 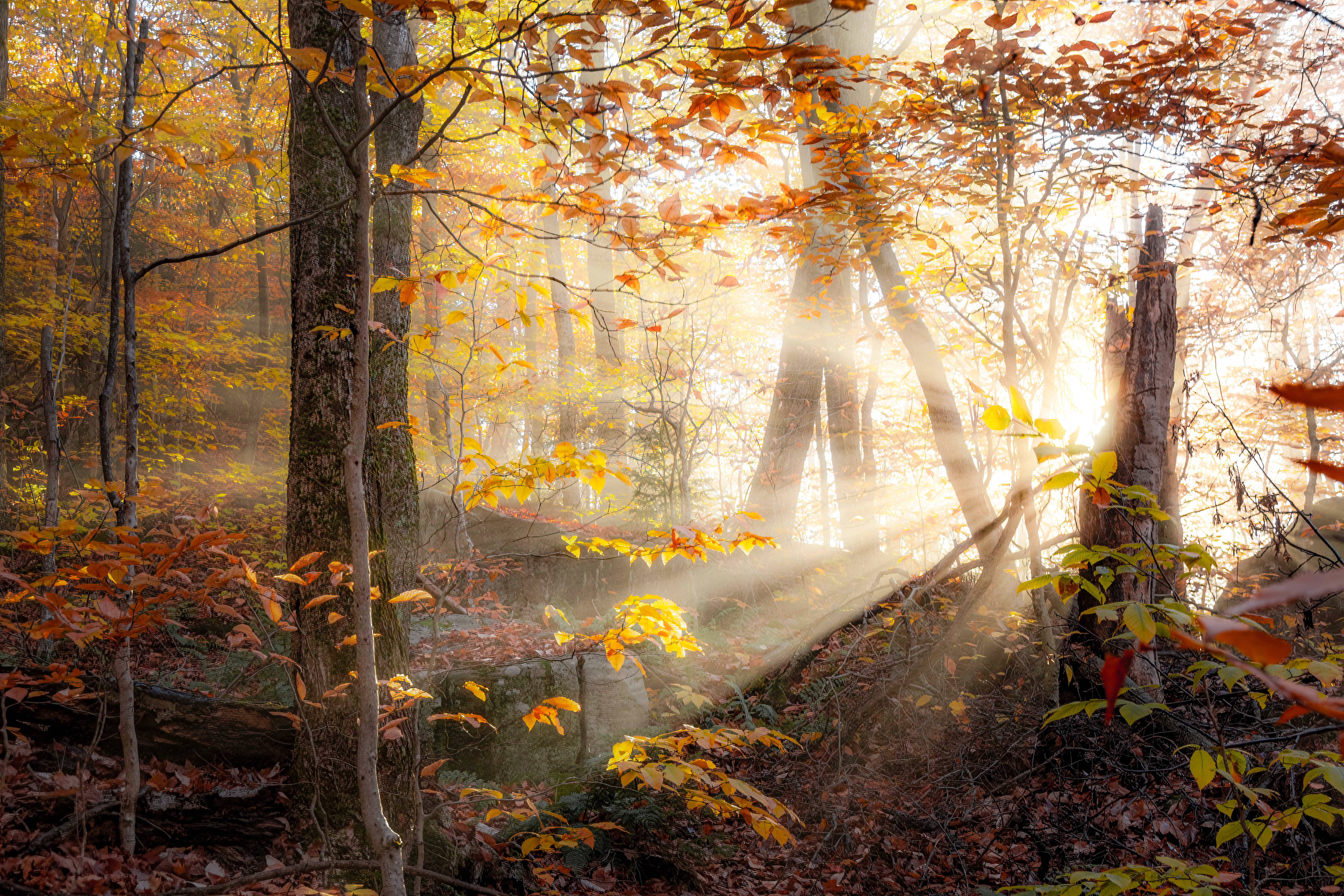 1st Prize, Lands, Waters and Wildlife | “A Light Breaks Through” by William Adamczak

Light has extraordinary power to convey a sense of place in photography, both real and imagined. For our judging panel, the broad rays of light shattering the early morning fog transported us to Middle Earth. We’d like to imagine there’s a group of Wood Elves making their way up the trail just out of sight. 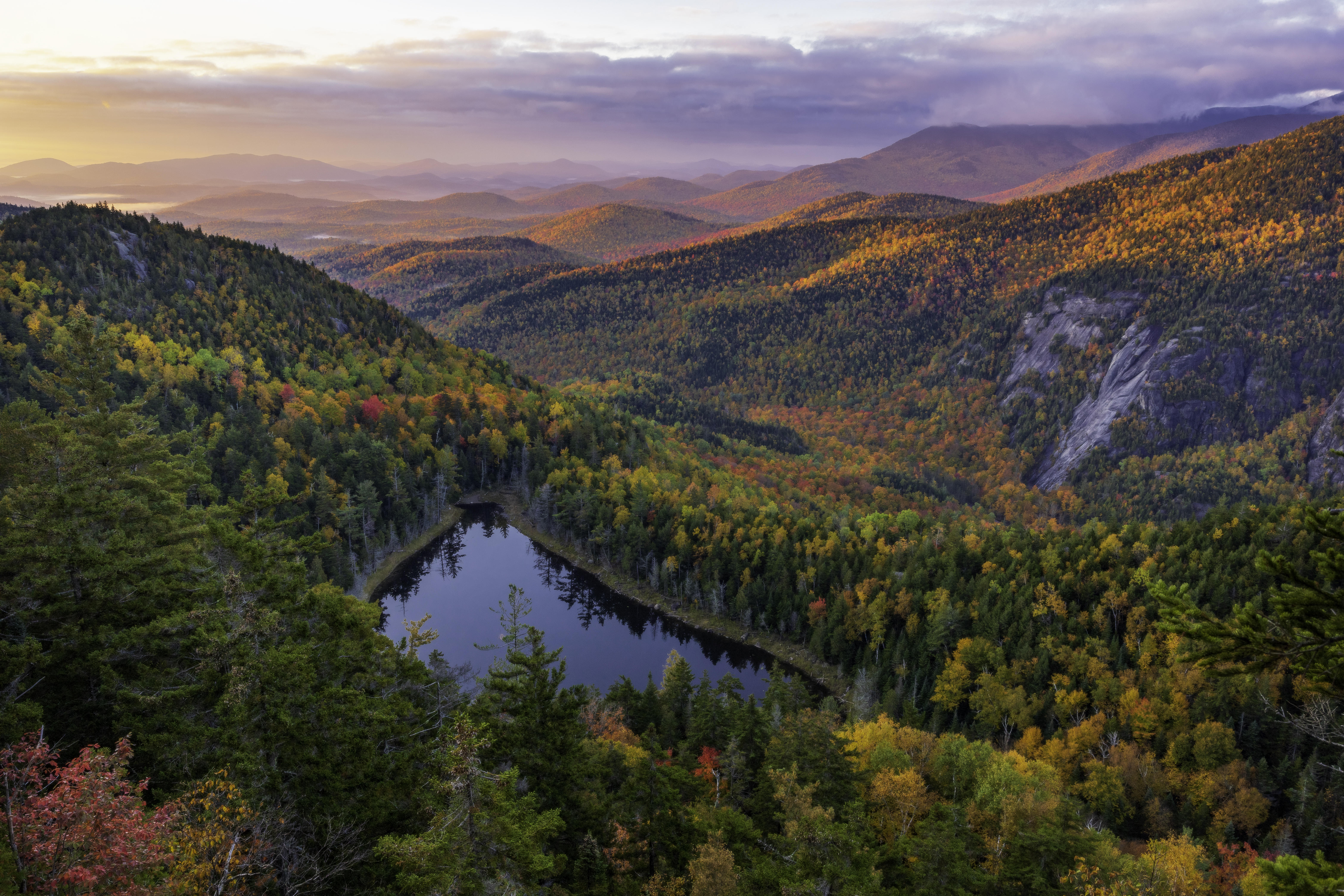 Rising out of the Adirondack’s forests are the High Peaks. Photographer Diana Richards calls the expansive fall vistas visible on these peaks “a dream come true for any landscape photographer.” Richards routinely chases the sunrise to viewpoints like this one. On this day, she started her hike at 4:30 a.m. and arrived just in time to capture the moment that the sun’s golden glow broke through the clouds. 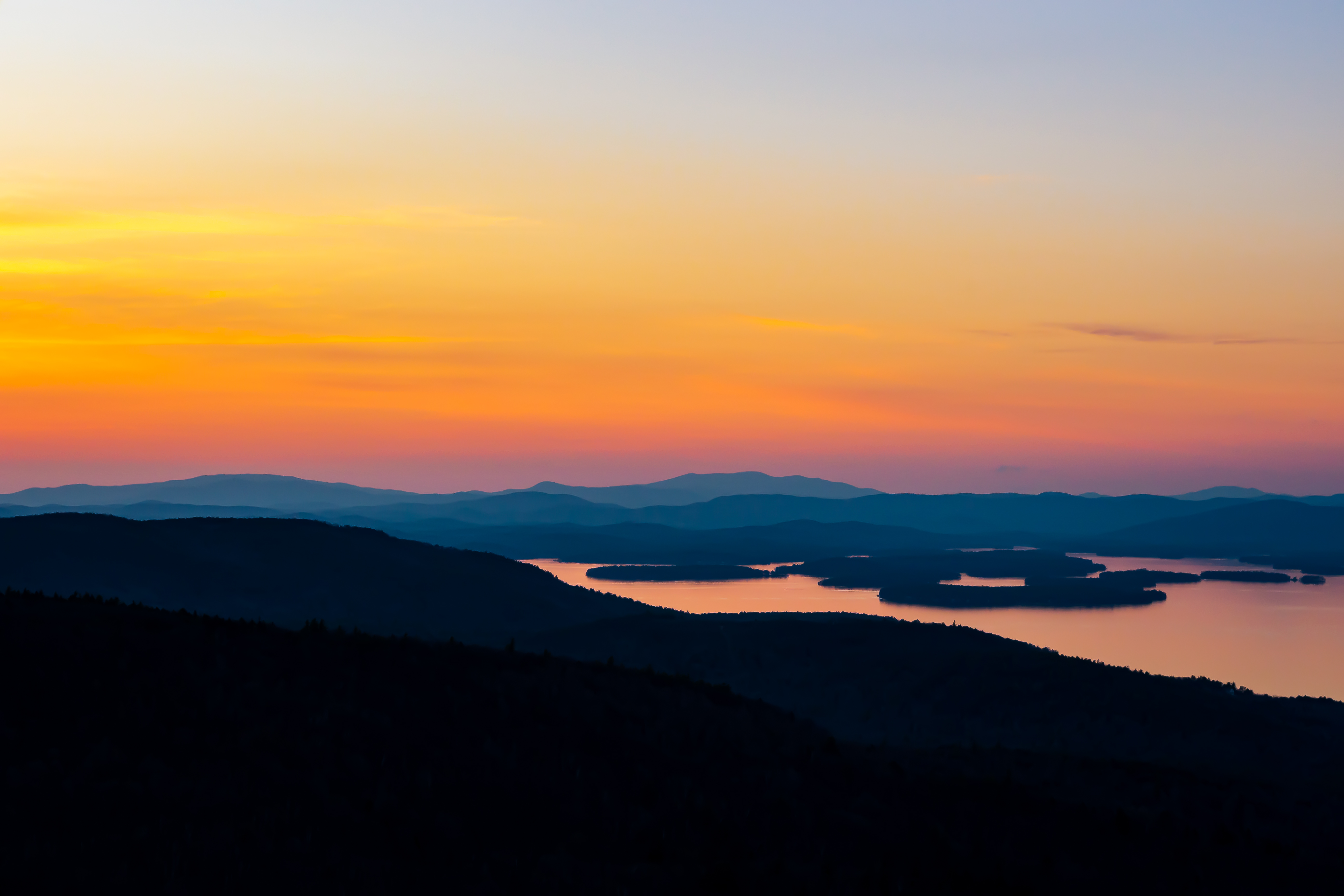 This photograph captures not only a spectacular sunset, but also a masterful study in light, shadow, and color. We were awed by the stark contrast between the searing haze of the setting sun and the inky contours of the Whites Mountains. You may find us at Mt. Major’s summit this summer hoping to catch the same bit of magic. 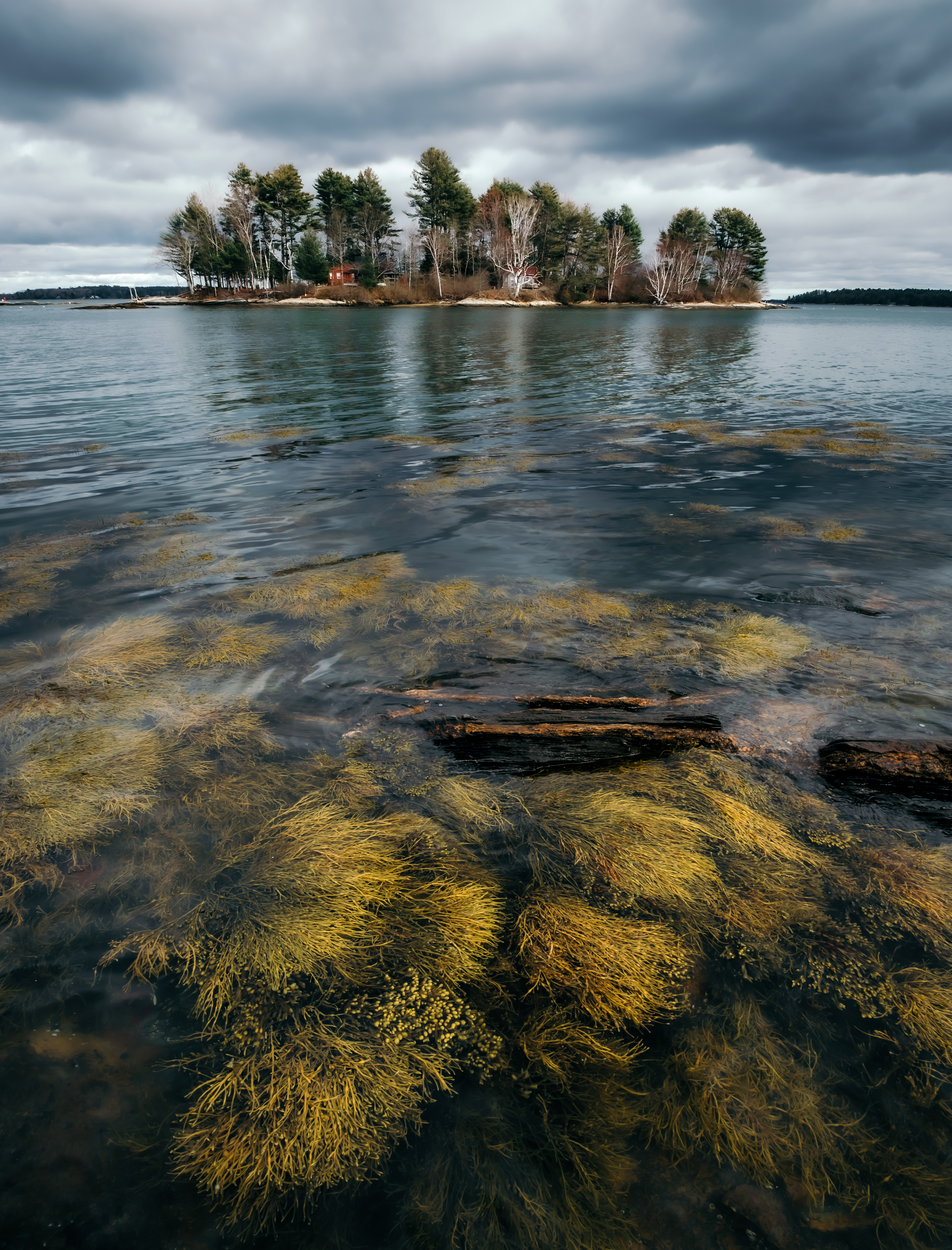 This unconventional seascape is a revelation. A startlingly intimate portrait of the waters just off Maine’s Midcoast, it caught our eye immediately and we’re still obsessed. The astonishingly detailed fans of seaweed drifting weightlessly in the tide won’t leave our imaginations any time soon. You’d be forgiven for thinking you could smell low tide just by glancing at this photo. 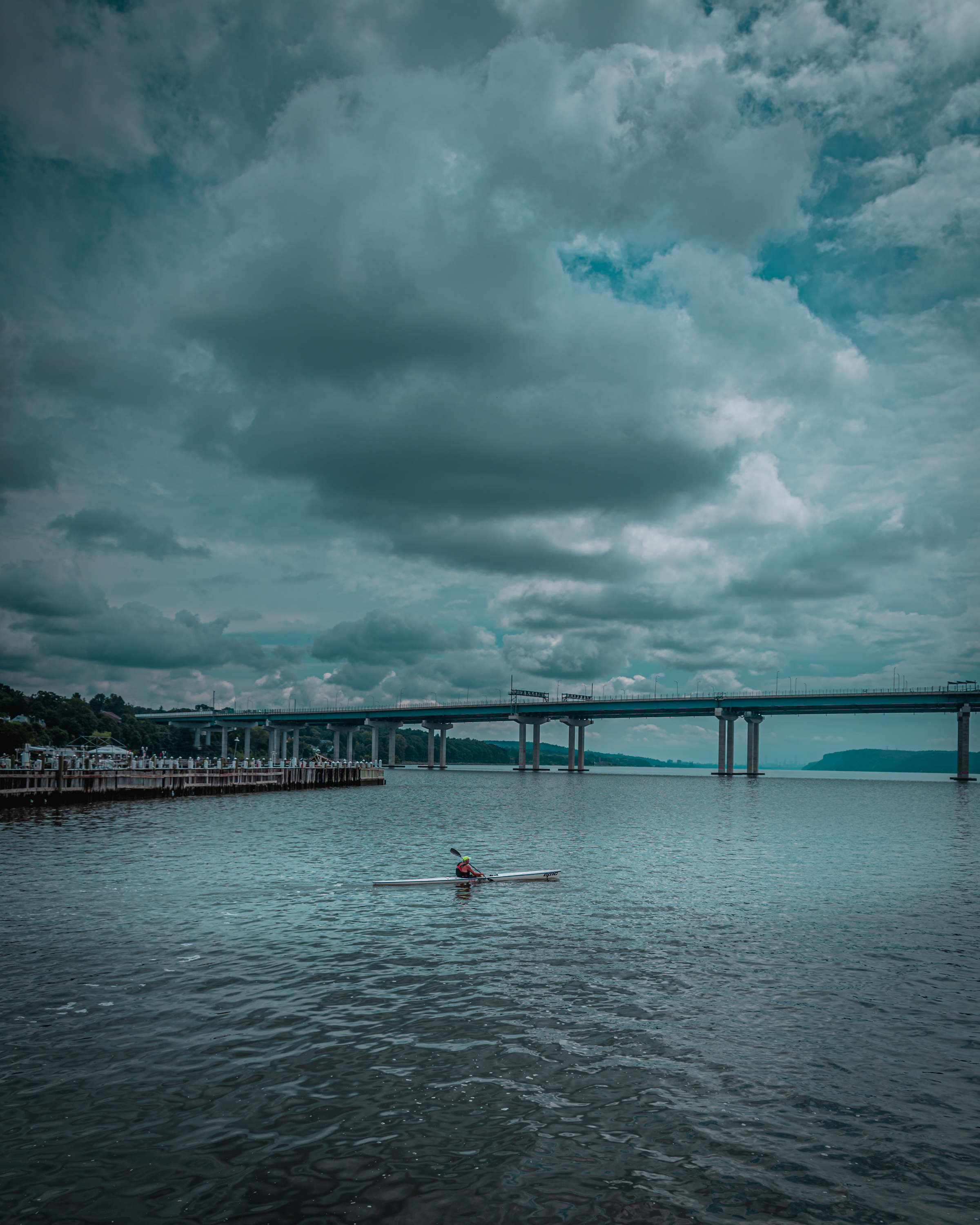 Photographer Erik McGregor’s portrait of a kayaker on the Hudson River captures the essence of this category: that adventures outdoors don’t have to happen far from the towns and cities we call home. As the paddler cuts through the cool grey water, charting a course beyond the bridge ahead, we’re reminded of all the adventures just beyond our front doors. 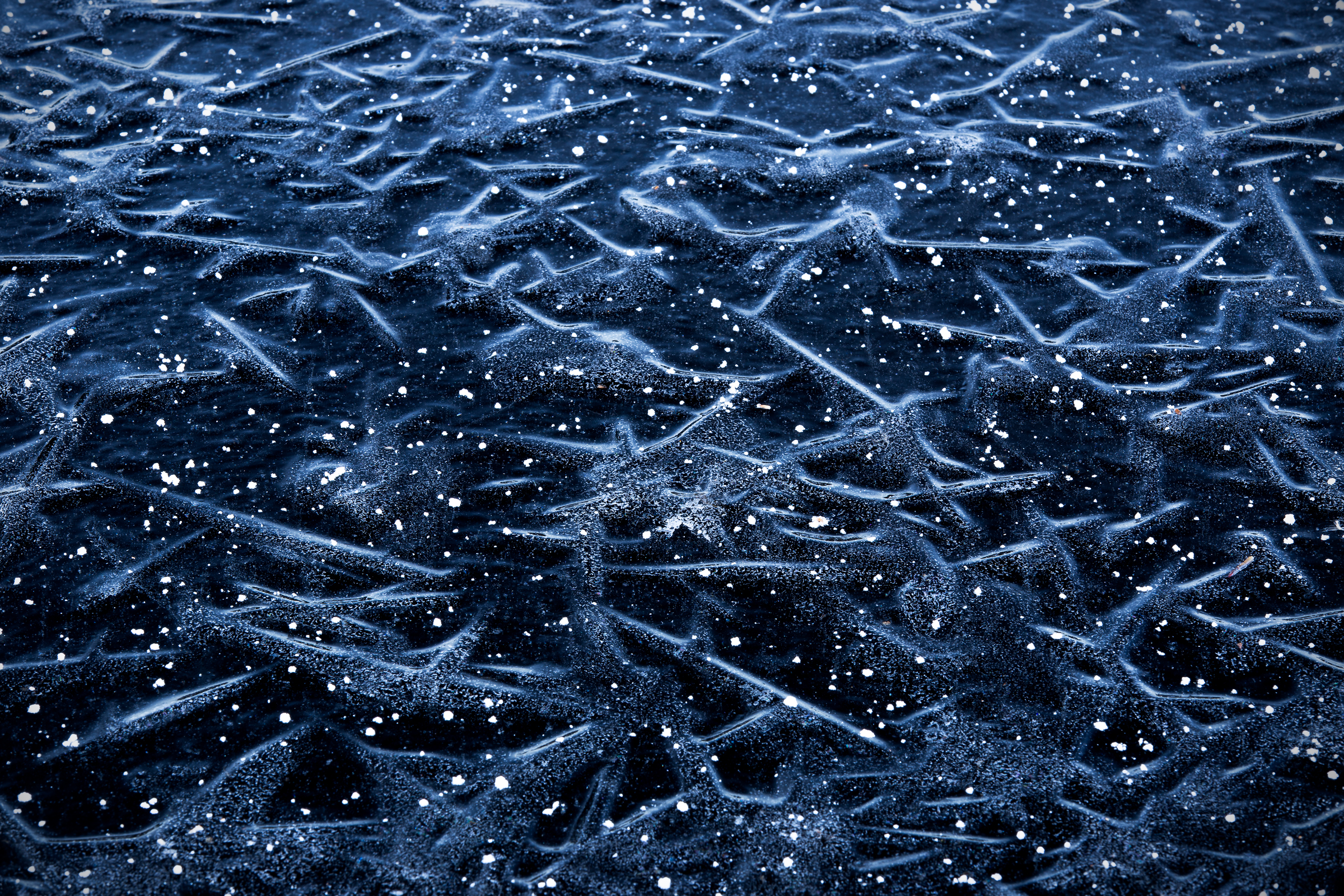 It takes a lot to impress New Englanders when it comes to snow and ice, so it’s pretty remarkable that we still can’t stop staring at this photo. Photographer Mike Weinhold speculates that these unusual ice formations were caused by fallen leaves just under the water’s surface. Whatever the cause, we’ll be searching for this phenomenon on the surface of every frozen lake and pond we see for years to come. 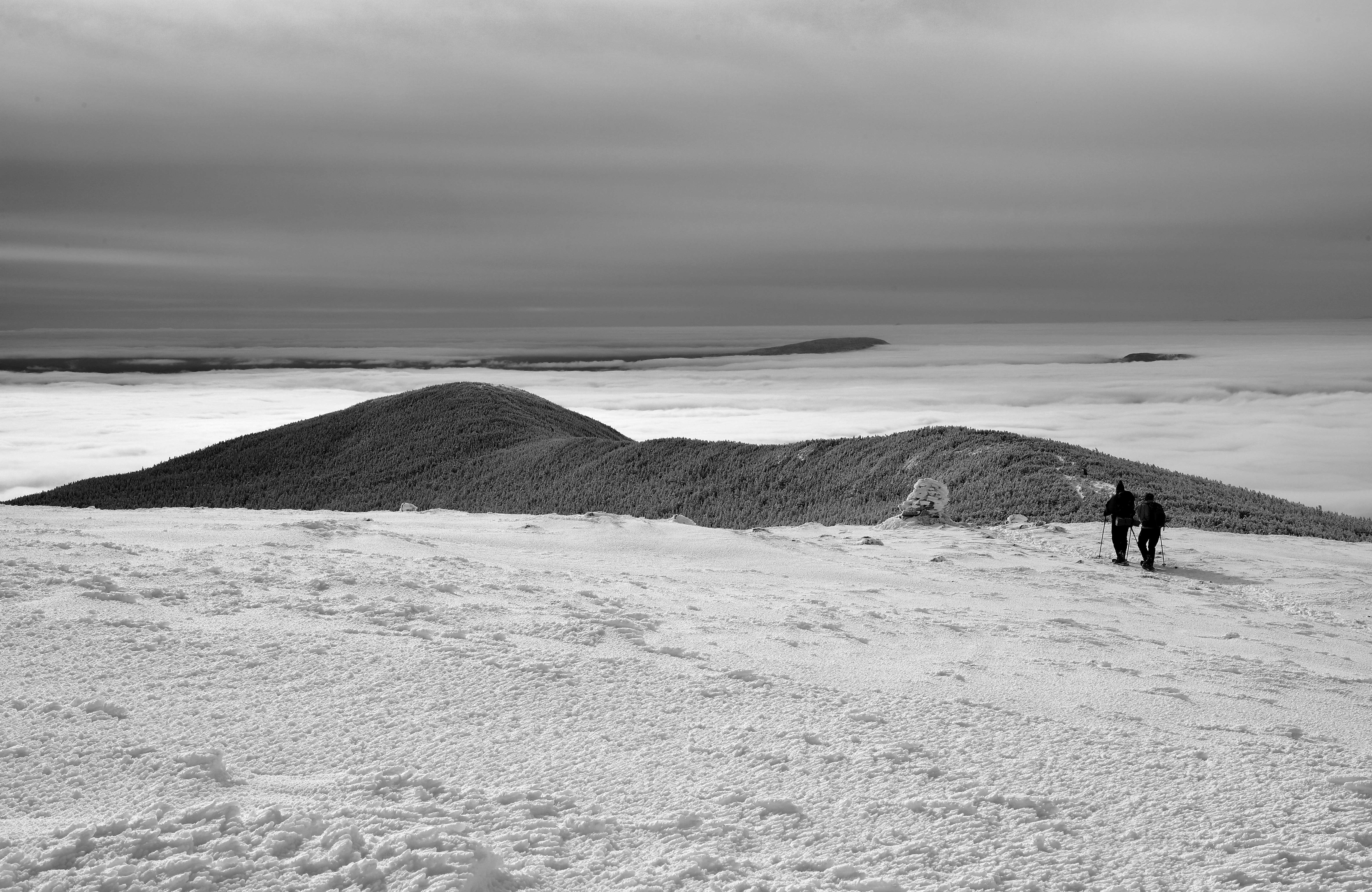 “Walking in a Sea of Clouds” by Dan Stone 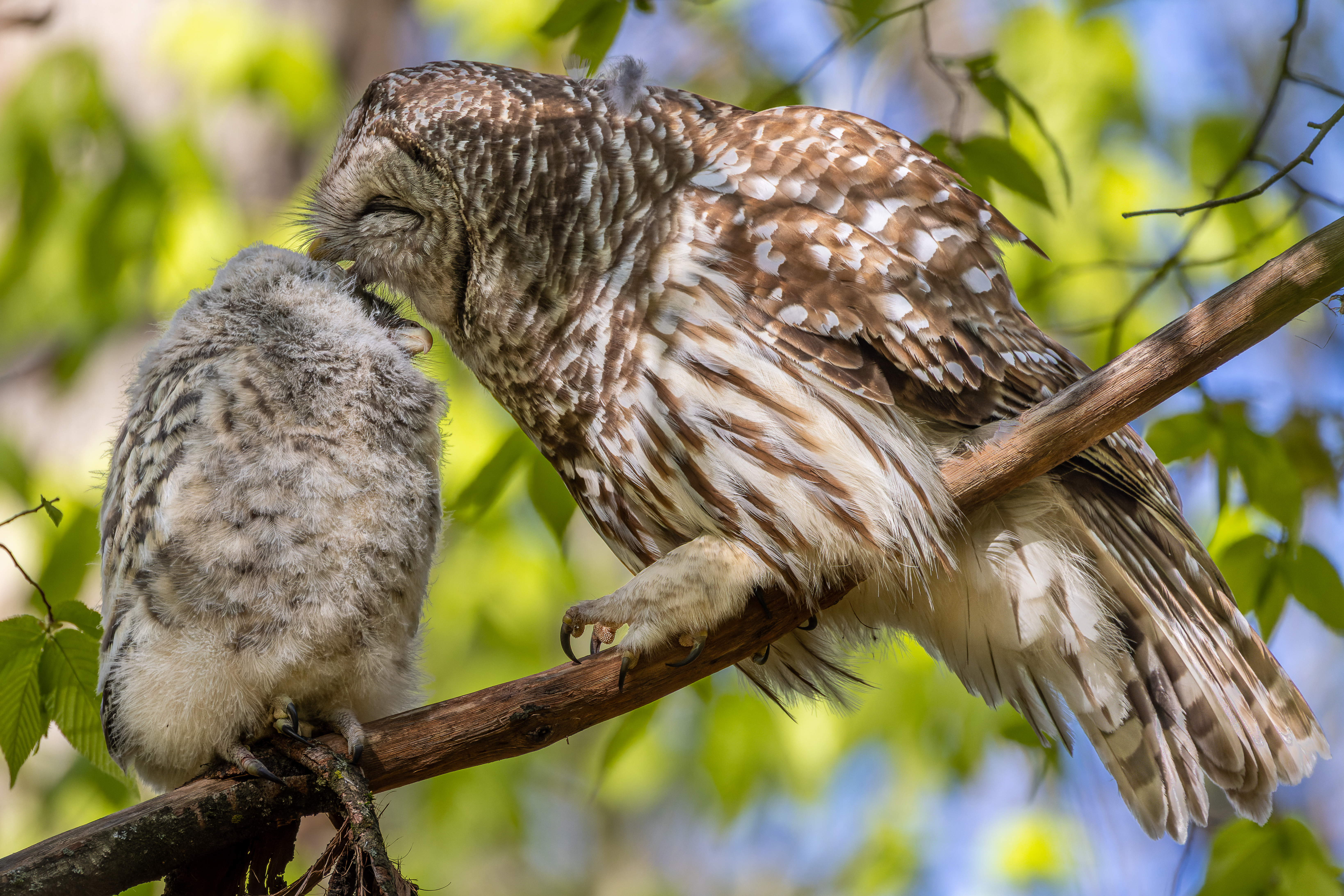 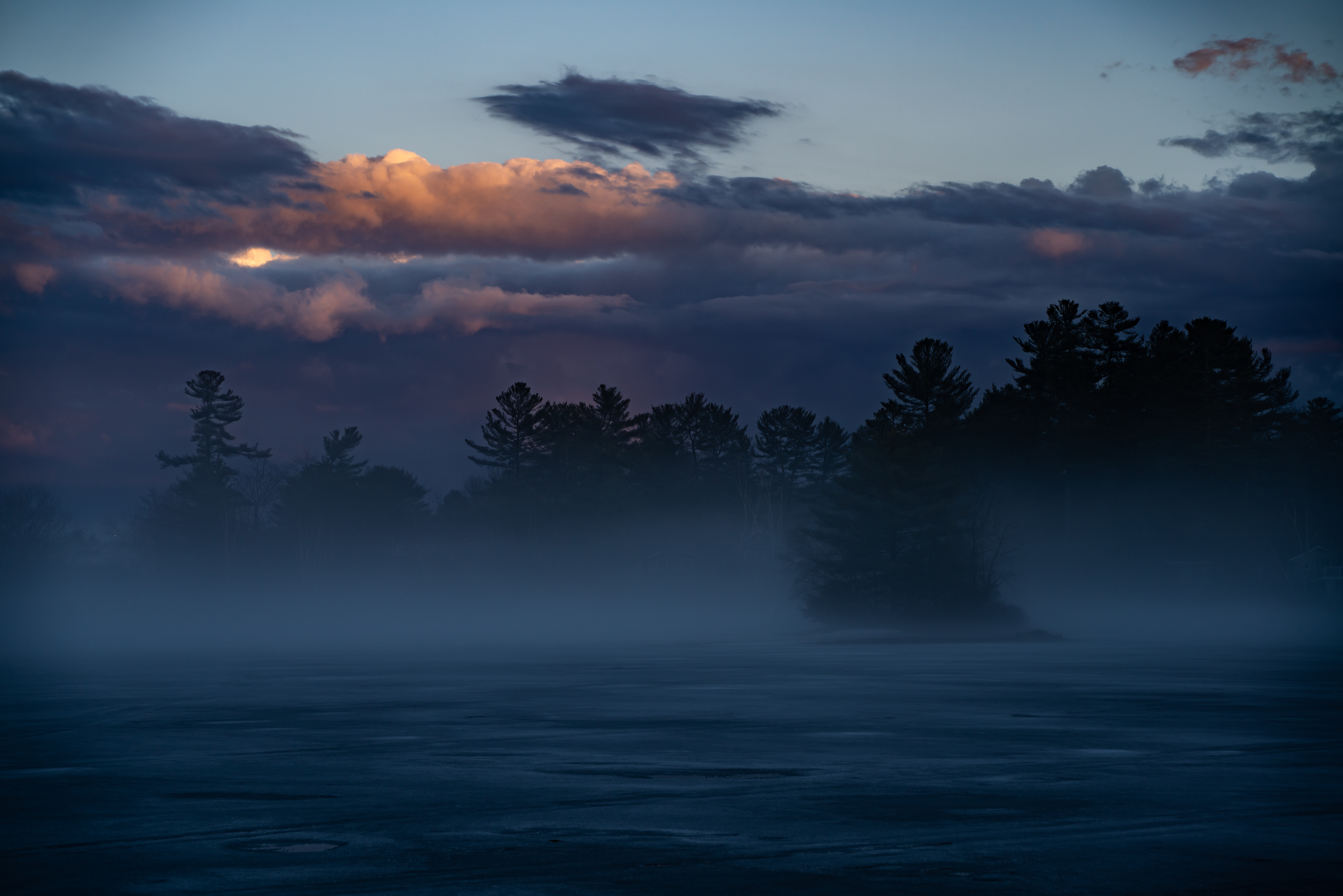 “Early Spring at the Lake” by Rob Roy 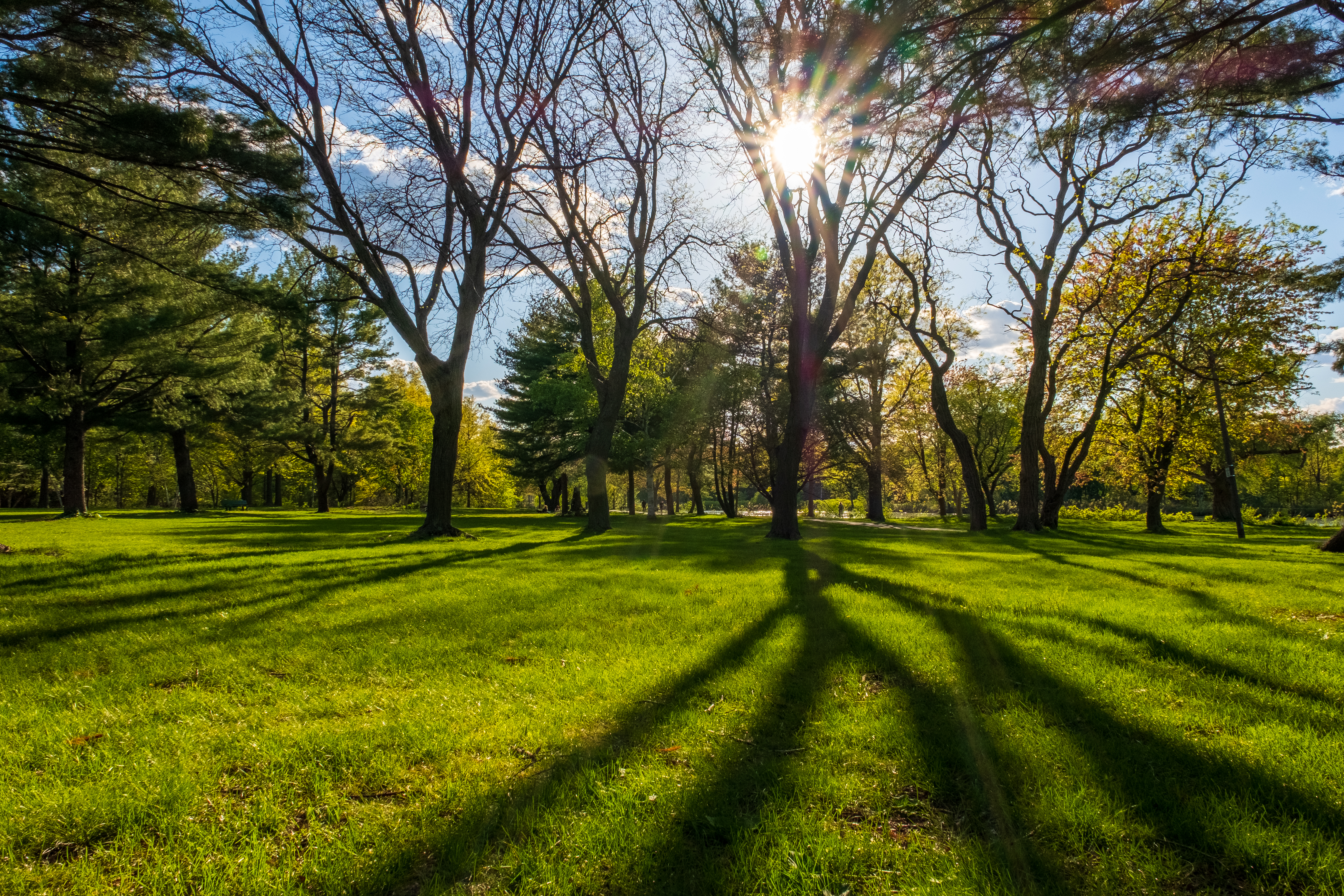 “Spring in the Park” by Kevin Rohn 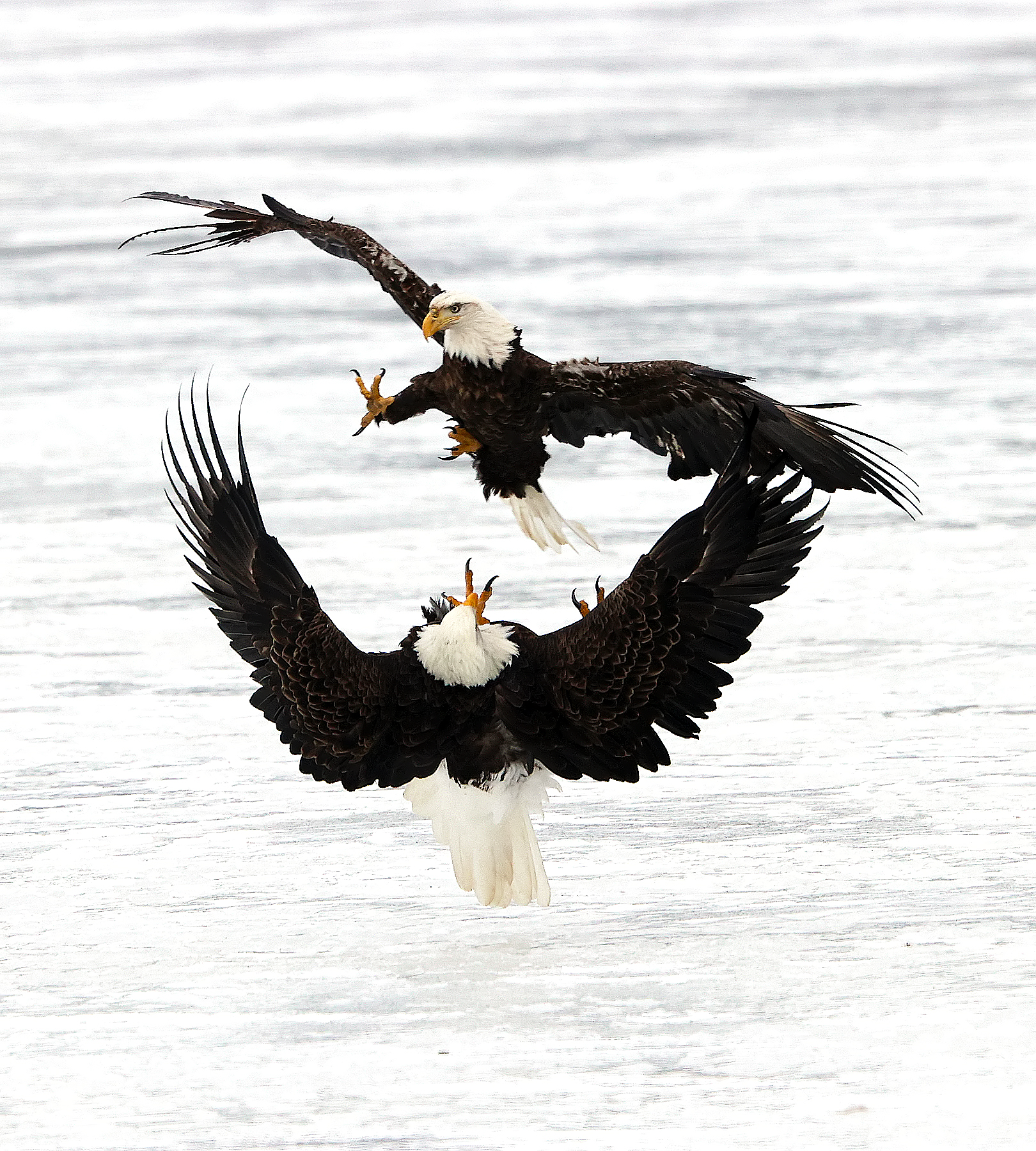 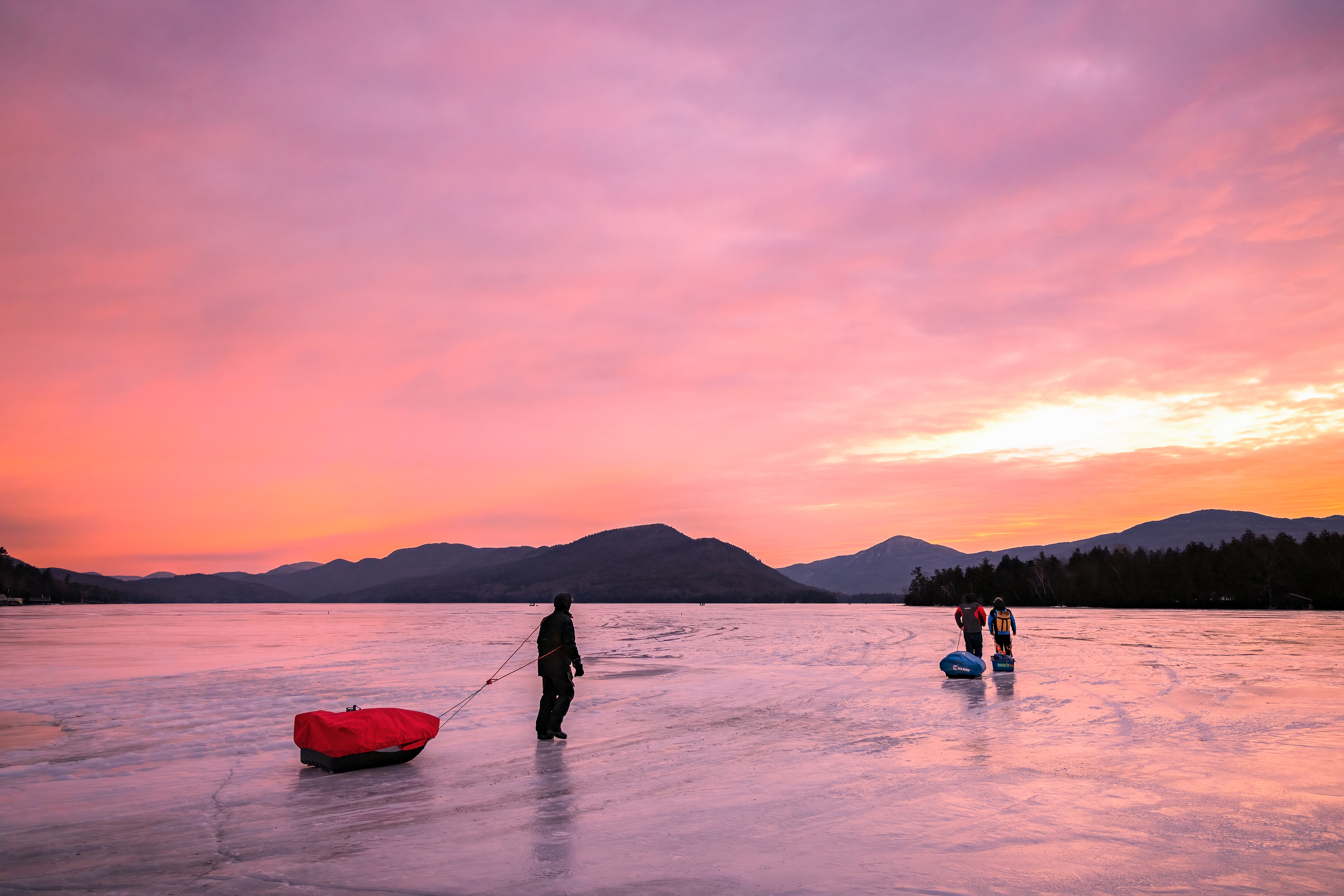 “Taking to the Ice” by William Adamczak