The Knife Edge of Grief: Remembering My Son on Katahdin, the Mountain He Loved 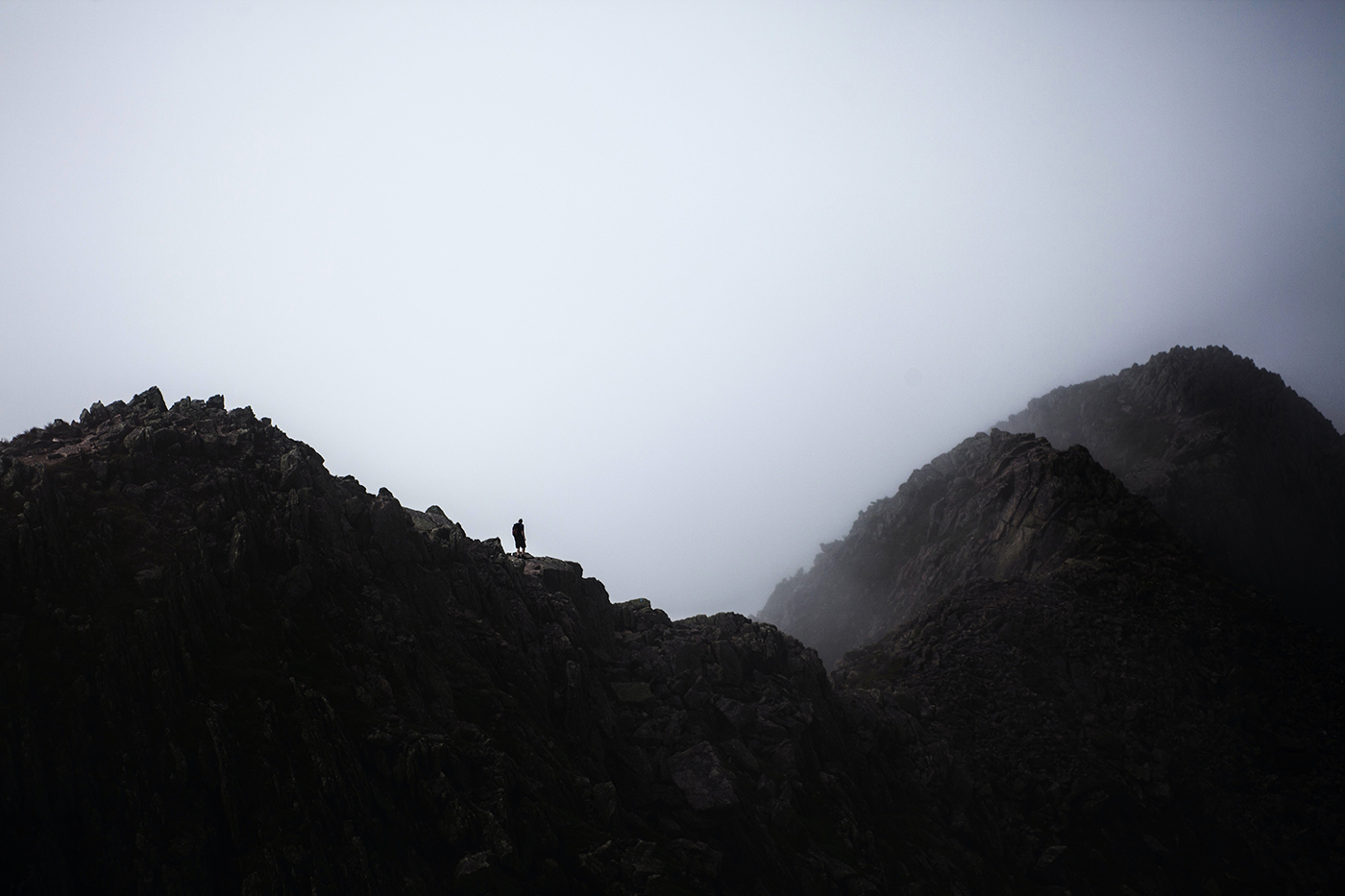 Growing up in Maine, I always understood the pull of Katahdin—which means “Greatest Mountain” in the Penobscot language—rising above Millinocket. She beckons, timeless and remote, for explorers and wanderers to visit.

Katahdin was secured by Gov. Percival Proctor Baxter in 1931 “for those who love nature and are willing to walk and make an effort to get close to nature.” Could he see, far in the future, a young man gone too soon, who would fall in love with the mountain’s wild beauty?

Ben loved the outdoors and spent most weekends pursuing his passions: snowboarding down mountains in the winter, hiking up them in the summer, swimming in lakes, floating down rivers, camping with friends. He said he felt the most himself when he was outside where there was always light, peace, and breath. 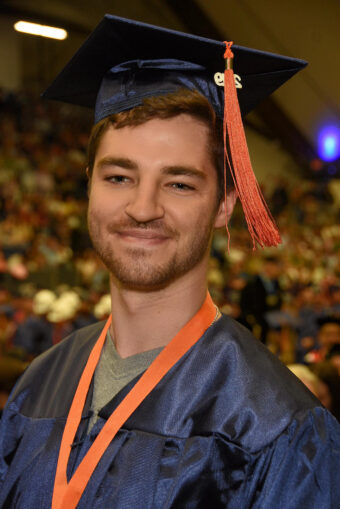 COURTESY OF CARRIE THOMPSONBen Thompson at his college graduation in 2019.

Ben loved Katahdin. He preferred texting to talking, but after his first Katahdin adventure, he called me.

“Mom. You gotta hike Katahdin with me,” he blurted “Cathedral up, then Knife Edge. You have to climb these massive boulders, but it’s worth it. I’m serious.”

“Knife Edge? That sounds a little sketchy. I used to think I could do that, but—”

“I’ll do it with you!” he interrupted. “The only thing is, we have to be there at the ass-crack of dawn to get a pass!”

“You gotta try it!” was how Ben got me to try flipping on the trampoline, hammock camping, and listening to new music. This time was no different. We agreed to hike Katahdin together in early September after his graduation, no matter what.

We never got the chance. Ben died by suicide in July 2019.

Suddenly, it was me who desperately needed to be outside—preferably on a mountain—where I could breathe and find peace. Where I could find Ben. So, early September found my husband, Eric, and me, hearts heavy, at the Chimney Pond trailhead—yes, at the ass-crack of dawn—preparing to hike Katahdin.

At first, the trail played peekaboo with Roaring Brook, providing moments of gentle waterfalls mixed with early morning sunlight dappling through the trees. The brook, the creak of my hiking poles, and the occasional conversations of other hikers were the only sounds. When the trail turned toward Chimney Pond, it steepened, crossing another stream and providing us brief glimpses of the mountain.

From the shore of Chimney Pond, the entire majestic ridge towered over the pond, a timeless queen watching us in solemn splendor: Baxter Peak to the southwest, Pamola Peak to the southeast, the Knife Edge linking them. I imagined Katahdin speaking to me.

I’ve been waiting for you. I know you are hurting. Come, tell me about it.

“What route are you taking?” the ranger asked us as we signed in.

“Cathedral is the hardest ascent; the boulder field at the bottom gives a small taste of the difficulty,” he told us. “If that’s too hard or is taking too long, consider Saddle instead. Also, there are no water sources until about 2 miles down Helon Taylor. You should have at least 3 liters of water, food, and the Ten Essentials.”

To me, Ben’s ashes were the most essential thing in my pack. 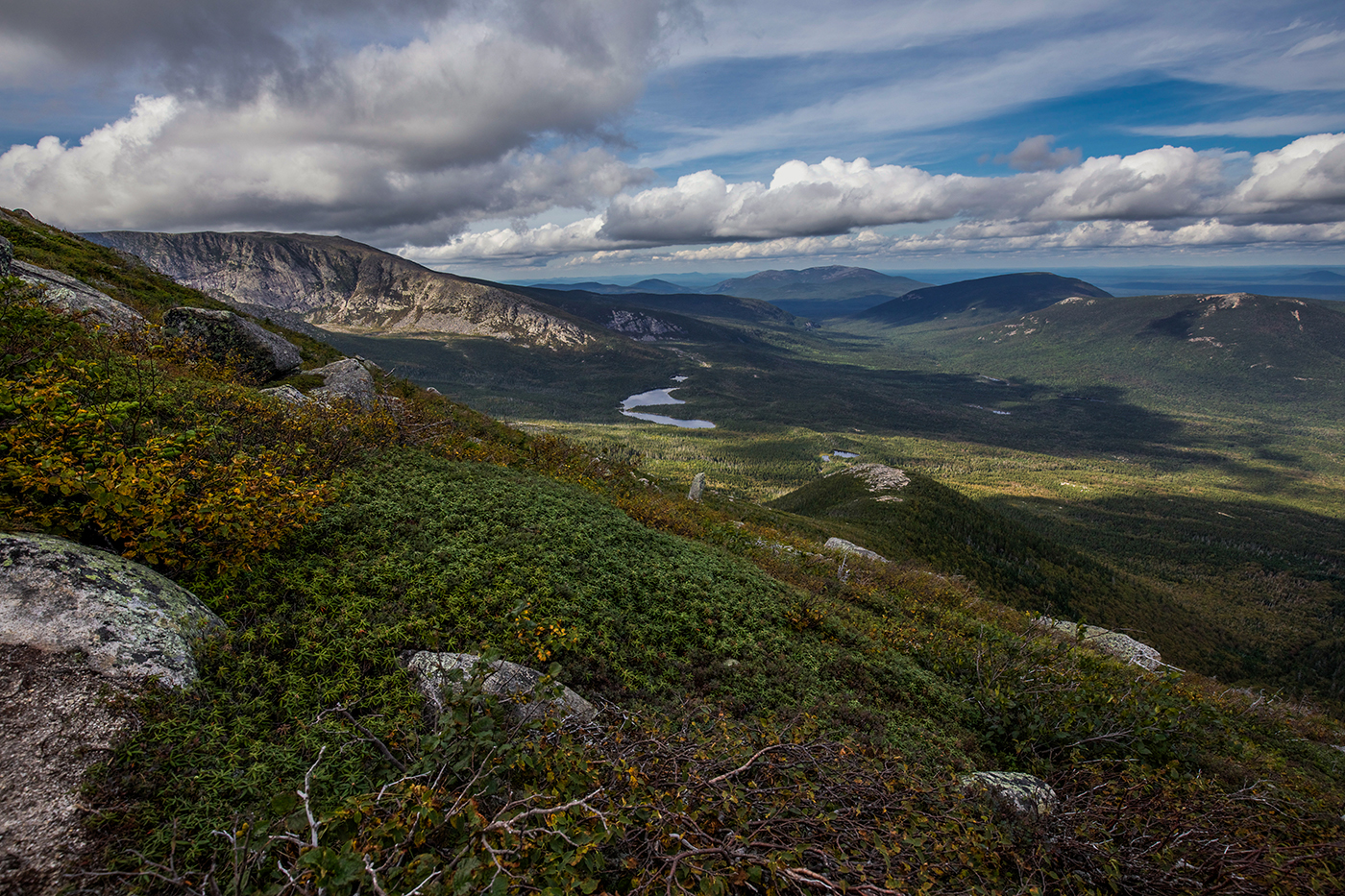 AMY SCHOONMAKER / AMC PHOTO CONTESTThe view from the Helon Taylor Trail in Baxter State Park is a stunning reward on the path to Katahdin’s summit.

Cathedral Trail is a fallen Jenga tower of enormous granite blocks comprising three flying buttresses jutting out from the side of the mountain below Baxter Peak. The trail requires both courage and concentration, weaving over and around the boulder piles, gaining approximately 2,000 feet of elevation in a mile.

The boulder field was simple, giving me confidence; it quickly faded when faced with the steepness leading up to the first cathedral. My feet slipped while scaling a boulder, and I slid down, banging my shin hard. “You got this,” my husband encouraged. I nodded, rubbing my shin, too focused on trying to keep my feet planted on the rock to respond.

The steeper the rock, the more I leaned forward onto my toes, the more I slipped. I’ve since learned that leaning forward and pushing with my toes is precisely the wrong technique for climbing slabs and boulders; standing straighter and letting the full sole of my boot meet the rock is far more effective. Ben, my physics major, would have understood that implicitly: more surface area creates more friction.

The first cathedral left me with a few scrapes on my shins and many more scrapes on my courage. My doubt about Knife Edge increased with every giant step from one boulder to another, every slab to scale. If I couldn’t handle this, how could I do that?

“I don’t think I’m going to get across Knife Edge.” I realized I said it aloud when my husband responded.

“I think you’ll be okay,” he reassured me. “But let’s decide at the top of Baxter and see how we’re doing.”

When I hit a section that required him to brace my foot so I could hoist myself up, I wondered how many times he’d have to do that on Knife Edge.

As we paused for a break, I looked around for the first time. We’d already ascended so high that Chimney Pond looked tiny. The morning sunlight highlighted the grey-green crags of granite on the rocky face of the mountain, and I remembered Ben’s words: It’s worth it. I imagined him cheering me forward and up, countering my doubts at every challenging section, boulder by boulder, step by careful step. When the trail shifted to loose rock and scree after the last cathedral, it was a relief, and far preferable to climbing gingerly across truck-sized boulders.

When I finally reached Baxter Peak, I broke down sobbing, leaning against the Katahdin sign. I did it, Ben. I’m here. I miss you so much.

We sank to the rocks in a sheltered spot and scattered a small tube of ashes into the crevices. As I looked across the world from the rooftop of Maine, the sun’s warmth on my face contrasting with the breeze, I suddenly felt as old as Katahdin herself.

“I can’t do the rest,” I said. “It’s not physical—I feel wrecked emotionally. We should just go down Saddle or something.” Tears rose; this felt like failure. “I feel like I’m letting Ben down.”

“It’s not letting him down,” Eric reassured me. “The mountain isn’t going anywhere; we’ll try again another time.”

Going down, I focused on the feeling of peace and connection I’d felt at the peak. Ben was right; Cathedral was a breathtaking challenge that taxed my courage and abilities, literally, to the edge, and I’d succeeded.

Still, I felt a hint of disappointment, of things unfinished. 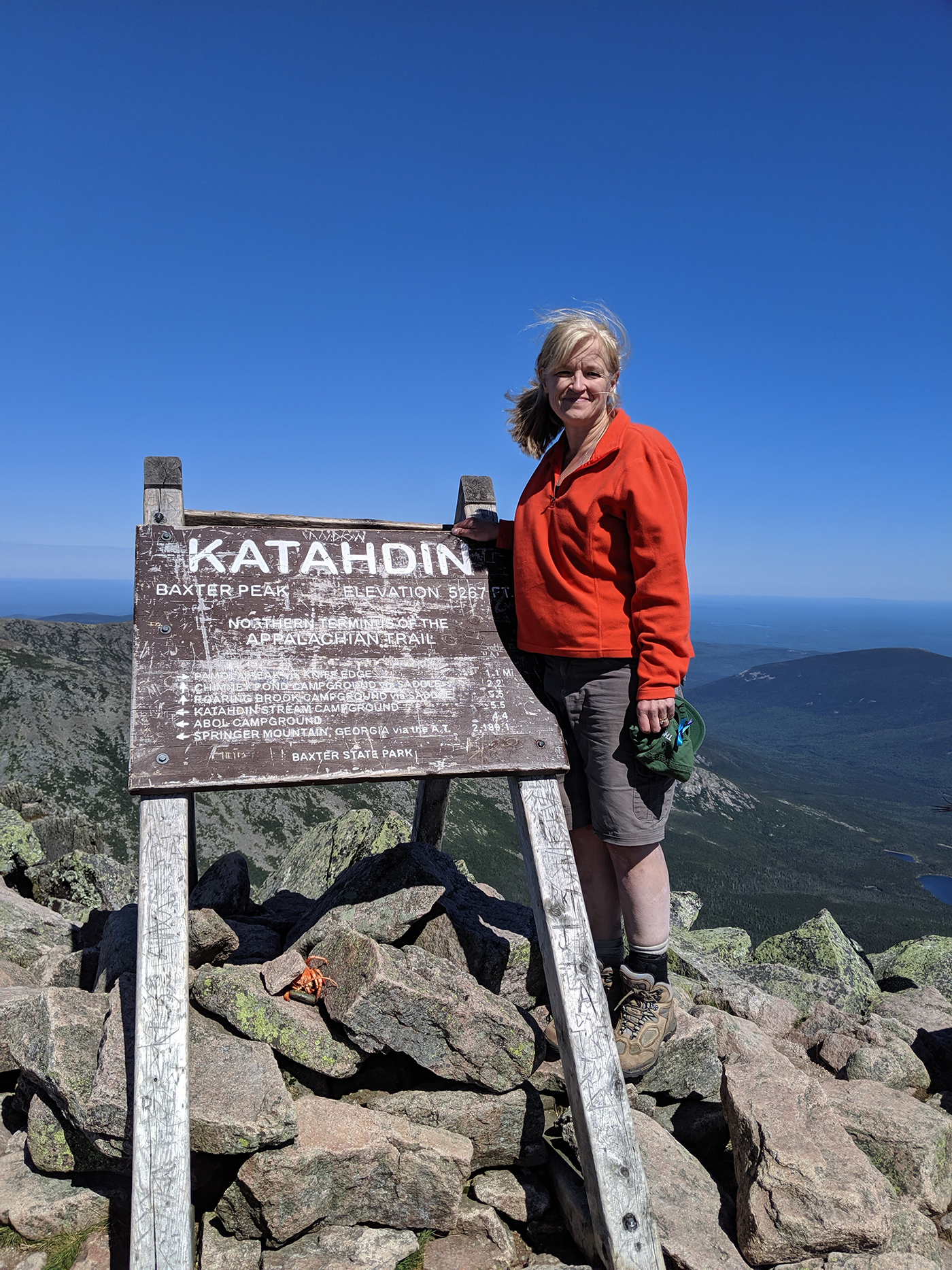 COURTESY OF CARRIE THOMPSONThe author at the summit of Katahdin, which her late son loved.

On July 24, 2020, I returned to Katahdin with a friend. In the year since Ben’s death, my husband had been diagnosed with cancer and laid off, and a pandemic consumed the world. It had been a year of saying goodbye, of finding a new self in the ashes of grief and loss, of learning that I could find joy even while I processed the grief of losing my son.

Hiking had become a retreat from all that trauma and a way to connect with Ben—a way to hide and a way to heal. At Chimney Pond, I imagined the mountain speaking to me. Welcome back. I know you’re still hurting, but I also see you’ve grown so much.

This time, I climbed those cathedrals with ease and confidence. I stood, fearless, on ledges to drink in the endless views in all directions along the Knife Edge. The notorious chimney section was fun.

On Pamola, I cried and sprinkled a tiny handful of ashes. I did it, Ben.

“Katahdin, in all its glory, forever shall remain the mountain of the people of Maine.”

Ben presented a carefree face to the world, hiding his inner struggle, not wanting to burden his friends or family. Focused on finishing his degree, he didn’t hike or snowboard more than a few times during his senior year in college. I think the lack of regular experiences outdoors was a significant factor in his suicide; Ben lost the ground because he lost his connection to it.

Losing Ben taught me that life is fragile and messy; we slip into darkness far too easily.  Hiking helped me regain some light. Even in the midst of unimaginable pain, joy and grief can coexist. Hiking Katahdin taught me that no hike is ever the same as the last one, even on the same route. Sometimes we turn back and have to figure out how to live with disappointment; other times we reach our goals.

I recently hiked Katahdin a third time, and I’ll visit her again someday. When I return, I know she will welcome me, listen to my story, and help me find Ben—and myself—somewhere along the way.

Carrie Thompson is a mom, teacher, writer, and suicide loss survivor. An avid hiker, Carrie hiked the New Hampshire 48 4000 footers in a year as a memorial project after her son's suicide. She has been a member of the AMC New Hampshire Chapter and remains a supporter of AMC's mission. Follow her writing on Medium, Twitter, and Instagram .

Wyn Wiley/ Pattie Gonia Part 1: The Queen in All of Us