How to Choose a Camping Stove 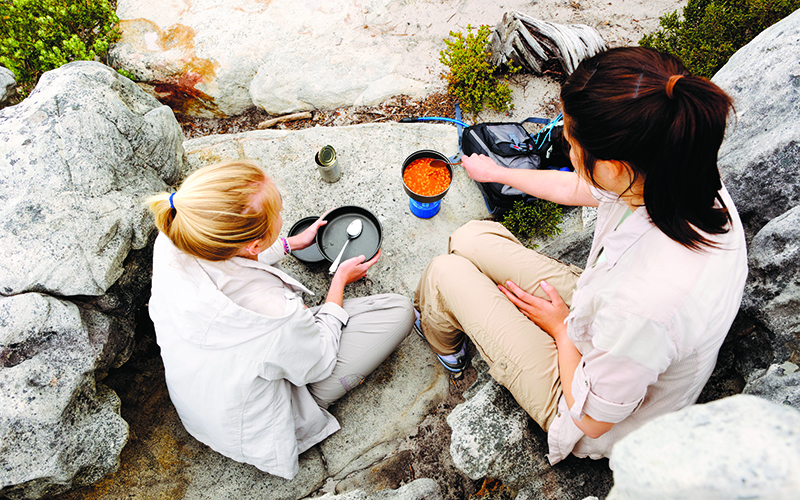 Warren Goldswain/ShutterstockA canister-style camping stove is a reliable option in temperatures above freezing.

Hot food. Hot drinks. Hot coffee. Yum. To enjoy any of these in the backcountry, you’re going to need a stove, of which there are three fundamental types: canister, alcohol, and liquid fuel. Which one is right for you? Your backpacking style and needs will help you decide.

CANISTER STOVES
A solid choice for most three-season backpacking excursions, canister stoves run on a pressurized butane-propane blend. They’re easy to use. Simply attach the stove burner to the canister, turn the knob, and light. They’re also safe, reliable, and can go from a gentle simmer to a full blast. The burners tend to be compact, lightweight (3 to 8 ounces), and relatively inexpensive ($20 to $60). Some makers, such as JetBoil ($80 to $130), integrate the pot and burner for increased efficiency, reducing boil times.

Canister stoves do have some drawbacks. The canisters are relatively pricey ($5 to $10, depending on size) and heavy (3 to 6 ounces when empty). They burn with less intensity when fuel is low and don’t work well—or at all—when temperatures fall below freezing. What’s more, the canisters require special effort to recycle. They must be completely drained and punctured before any recycling service will accept them.

ALCOHOL STOVES
Compact and extremely lightweight, alcohol stoves are a popular choice for long-distance hikers and ultralight enthusiasts. Most styles weigh less than 3 ounces, burn in blissful silence, and feature no complicated moving parts. They are inexpensive ($15 to $40) and use low-cost and widely available fuel, of which clean-burning denatured alcohol and methanol are the most common types ($4 to $10 per pint). Do-it-yourselfers can even create a stove weighing less than 1 ounce from a soda can.

These advantages come at the expense of heat. Alcohol fuel contains approximately half the energy by weight of white gas or butane-propane blends. As a result, heat output is proportionately less and boil times longer. Most canister and liquid-fuel stoves can boil a pint of water in about three minutes; alcohol stoves generally take at least twice as long. They are also more sensitive to wind and require a windscreen for even the lightest breeze.

LIQUID-FUEL STOVES
These stoves run on white gas, which is contained in a separate self-pressurized fuel bottle and fed to the burner via a fuel line. White gas (a.k.a. “Coleman fuel”) is inexpensive and widely available. Some liquid-fuel stoves can burn kerosene as well—a plus for international travel, when white gas may not be available. This type of stove burns hot, works well in extremely cold conditions, and is generally the best choice for winter camping.

Liquid-fuel stoves do have some significant drawbacks. They’re heavy, with the pump and burner weighing 8 to 16 ounces combined. The fuel bottle adds another 3 to 7 ounces, not including fuel. They are also bulky, noisy, and pricey ($75 to $125). Lighting the burner is more complex than with alcohol or canister stoves. You must first ignite a small amount of liquid fuel below the burner to prime the stove. Finally, liquid-fuel stoves require more care and maintenance to keep them running smoothly.

OTHER STOVES
Compact wood-burning stoves will transform twigs into boiling water, ensuring a never-ending fuel supply; Solo Stove produces one of the best (9 ounces, $70). Solid fuel stoves, such as those produced by Esbit, use small fuel tablets that provide 10 to 12 minutes of burn time. Lightweight and inexpensive (as little as $10 for a simple folding stove), they offer another option for ultralighters who don’t mind slow boil times.