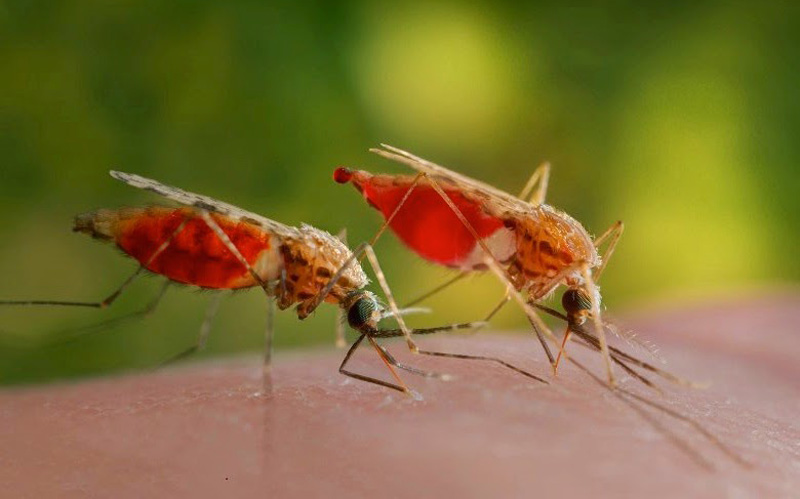 I spent my morning walking the dog and serving as an all-you-can-eat brunch buffet for my local mosquito population. It got me thinking about the little buzzers and prompted several crucial questions in my head. I now have the answers.

Death by mosquito draining?
For an average person, losing two liters of blood becomes life-threatening. The average mosquito bite drains 0.01 to 0.001 milliliters of blood. Thus it would take somewhere between 200,000 and 2 million mosquito bites to kill you from blood loss. For the average adult male (a.k.a. me), that works out to between 68 and 680 bites for every square inch of skin. (Converted from average body surface area of adult male: 1.9 square meters.)

Optimal temperature for mosquitoes?
Mosquitoes are happiest and most active when the temperature hovers around 80 degrees. They become sluggish once temperatures dip to 60 degrees and most species cease activity entirely somewhere in the mid-fifties.

Largest mosquito in the world?
The so-called “elephant mosquito” (toxorhynchites speciosus) can grow up 1.5 inches in length and lives in coastal Australia. If it drank blood, it might take fewer than 200,000 bites to drain you dead. But it doesn’t — it feeds on plant juices and nectar.

Number of mosquito species?
There are approximately 3,500 species of mosquitoes worldwide. Approximately 175 have been found in the United States, but the numbers are fewer in Northeast states, including Massachusetts (~50 species), New York (~70), and Maryland (~60).

Do mosquitoes bite some people more than others?
Yes, for a variety of reasons, including your blood type, temperature, clothing color, alcohol consumption, and more. Get the full low-down in my previous post on the topic.