Officials: Mountain Search and Rescue Went Up as the Unprepared Headed Out 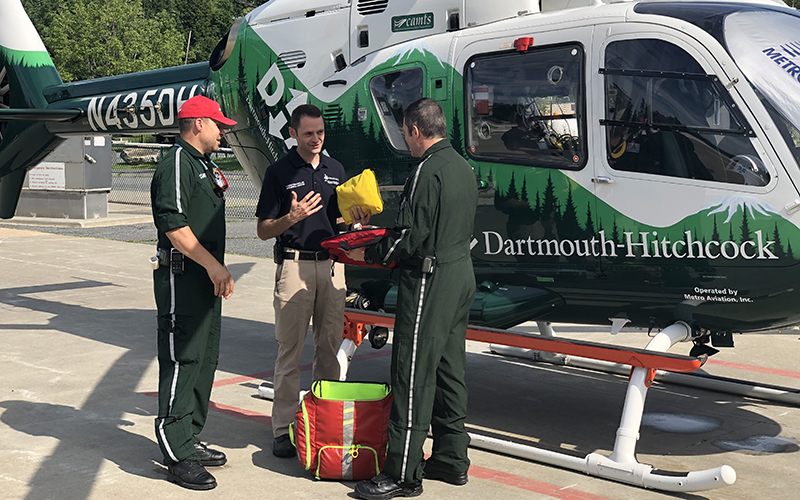 Courtesy of Dr. Tom TrimarcoDr. Tom Trimarco, AMC’s medical advisor, stands with members of the Dartmouth–Hitchcock Advanced Response Team, which he oversees. New Hampshire officials report that backcountry rescues are on the rise amid 2020 COVID-19 shutdowns.

New Hampshire Fish and Game’s Lt. Jim Kneeland doesn’t go anywhere without his phone these days. Or his maps. Kneeland oversees Fish and Game operations in the western White Mountains and since the beginning of summer, he’s been on the receiving end of a seemingly endless torrent of calls for help. Not just search and rescue calls, but directional requests from hikers who’ve ambled into the backcountry without a map and gotten lost—often after dark.

“Come sunset, every night, I turn my computer on so that my maps are ready when hikers start calling in and asking, ‘Which way should I turn at this intersection?’” Kneeland says, with what sounds like a gallows chuckle. “[One Saturday in October], a severe storm went through, with a tornado warning. We had a fellow up on the Falling Waters Trail with a broken ankle. And still, the calls kept coming…I dealt with seven other situations by cell phone while we were on this carry-out.”

Kneeland can’t recall another summer or fall when he was flooded with so many calls from the backcountry. But this hasn’t exactly been a typical summer. With COVID-19 forcing Americans to relocate much of their lives into the outdoors—one of the safer places you can be during a pandemic, as long as you avoid crowds—people have been taking to the backcountry like ticks on a moose. Both state and national parks across the country have logged record-breaking crowds this year.  In the White Mountains, this hiker explosion has led to overflow parking that can sometimes stretch nearly a mile down local roads and highways. It’s also fueled an unfortunate uptick in littering that prompted the Forest Service to issue an open letter on Facebook asking visitors to keep trails and campsites clean.

Naturally, some onlookers have wondered: as Americans flock to the backcountry in droves, many of them inexperienced, would search and rescue (SAR) missions skyrocket as well?

Col. Kevin Jordan, top ranking officer of New Hampshire Fish and Game, predicts the number of SAR calls and missions in the White Mountains this summer and fall will be among the highest in Fish and Game’s history. “I’d be surprised if this wasn’t a nationwide trend,” Jordan says. “Being outdoors is what most governors promoted. Our governor did that, and I kind of jumped on him after and said, ‘You’ve got to be careful’ because people were taking off on these epic hikes and they weren’t ready for them.”

The picture grows more macabre when one takes both hiking SARs and other recreational accidents into account. In September, the White Mountains made national headlines when a string of regional fatalities occurred in less than a week. One hiker and two rock climbers fell to their deaths at Arethusa Falls, Cannon Cliff, and Rumney Rocks, respectively. And while at least one of these fatalities was attributed to equipment failure, all three speak to the broader trend Jordan has been seeing in the 2020 outdoor recreation scene, throughout the state. “The drownings and the climbing accidents are up from years past,” Jordan says, alluding to incidents like the September case of a missing boater and fisherman whose body was recovered from Lake Massabesic near Manchester. “The other thing that’s been higher this summer is suicides in the White Mountains. And that’s not something I use search and rescue volunteers for, so they wouldn’t be aware of that.”

Typically, while NH Fish & Game takes the lead in organizing and running SAR missions, the literal legwork is performed by both Fish & Game officers and volunteers who might come from rescue groups such as the Gorham-Randolph based Androscoggin Valley Search and Rescue (AVSAR) or nearby backcountry facilities like AMC’s high mountain huts, whose Croo members are trained to respond to medical emergencies in the field. A new concern for all parties is exposure to COVID-19 while conducting SAR missions. Even with PPE such as masks and gloves, it’s basically impossible to physically distance while carrying a patient in a litter down a rooty trail or checking their vital signs. If one SAR volunteer tests positive after a mission, that puts every volunteer who participated into quarantine for two weeks, reducing the pool of available volunteers and making SARs more difficult. New Hampshire’s SAR providers have managed to avoid such a disaster thus far, but every SAR is a gamble in and of itself.

A parallel narrative is unfolding in New York’s Adirondack Mountains, where heightened visitor traffic also appears to be contributing to a surge of SAR missions. The weeks of September 22 to 29 and October 1 to 7—some of the busiest of the year for mountain adventuring—saw seven backcountry rescues each. This spike in rescues came after a summer SAR activity that the Adirondack Daily Enterprise described as “hectic.” As of October 20, the number of SAR missions carried out by the New York State Department of Environmental Conservation (DEC) in 2020 has reached 230, which slightly surpasses each annual SAR tally since 2010. “Over the last decade, DEC has seen a steady increase in the number of visitors recreating on the lands and waters of the Forest Preserve and conservation easements in the Adirondacks,” the DEC tells AMC Outdoors via email. “These numbers continued to rise during the state’s ongoing response to COVID-19 as New Yorkers were eager for a chance to get outside, change up the scenery, and get a breath of fresh air.”

Now, as leaf peeping season winds down—with winter closing in—northeast SAR providers find themselves at an ambiguous juncture. Most hikers will hang up their trekking poles until the spring thaw, which should at least relieve Lt. Kneeland of the relentless phone calls he answers nightly. But new concerns abound as skiers gear up for hitting the slopes in the months ahead.

“As ski resorts limit the number of folks who can come and ski there, those who get turned away might decide to just go into the backcountry and ski there,” Kneeland explains. “Winter skiing accidents often occur in these backcountry areas where there’s no trail system, and that puts a different strain on our volunteers. We don’t ask them to go into those areas a whole lot.”

The advent of winter tasks SAR providers with getting staff and volunteers ready for the harsh weather. “Rangers are prepared to spend the night out in any condition in order to execute a successful rescue,” the New York DEC writes. But ultimately, the real task is encouraging the general public to travel to the backcountry better prepared than the hikers who lost their way in the backcountry or hurt themselves this summer—for the sake of everyone’s health and safety.

“It would be awfully nice if [hikers] just visited something like HikeSafe.com and looked at their listing of what equipment is needed for each particular season,” Kneeland said. “We’re not trying to stop people from going into the wilderness, but it’s better to do it prepared so they don’t need our assistance. We want to help people. I’d just love it if they helped themselves beforehand.”

Miles Howard is a writer in Boston.