Do You Know How to Respond to a Moose Encounter? 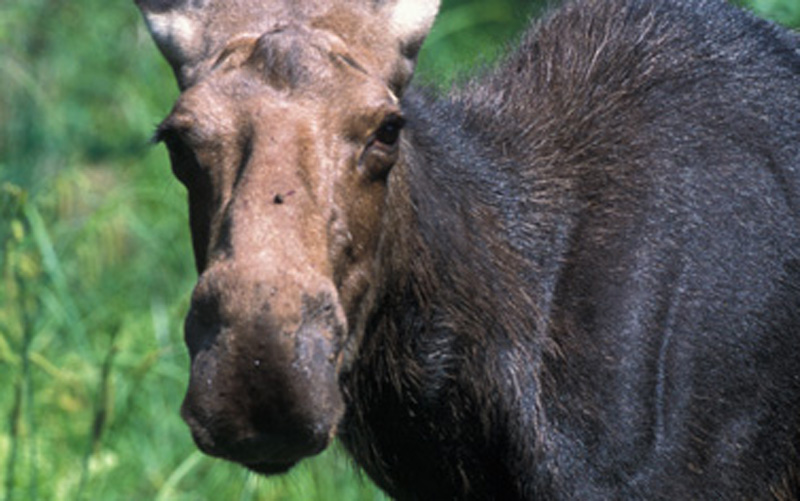 Jerry and Marcy MonkmanThousands of moose roam the woods of the Northeast.

I had the biggest wildlife encounter of my life last winter on the cross-country ski trails of Anchorage, Alaska. I skied by a moose calmly browsing in the willows near the trail. As I passed behind, it suddenly whirled without warning. Within a ski stride, the moose advanced almost close enough to stomp me with its front hooves. Then it stopped—and I skied safely away with adrenaline-juiced speed. It was quite the learning experience.

Similar incidents could easily happen in New England, where thousands of moose roam the wooded, mountainous areas frequented by hikers and other backcountry enthusiasts. More than 30,000 moose live in Maine. At least 4,000 can be found in New Hampshire, averaging about one per square mile in the White Mountains. Healthy, smaller populations exist in Vermont, New York, and Massachusetts. If you spend enough time outside in the Northeast, you’ll run into a moose eventually. They are majestic animals. Appreciate and enjoy their presence—just make sure every encounter is a safe one. Here’s how to respond to a moose.

Danger and Distance
If a moose feels threatened by your presence, it does one of two things. Often the moose simply leaves the area to avoid the threat. But sometimes it responds aggressively to make you leave the area instead. The minimum safe distance from a moose varies widely depending on the surrounding environment and the temperament of the animal. As a general rule, if you are causing the moose to change its behavior in any way, you are too close. Even if the moose appears undisturbed by your presence, you must still be able to evade the animal should it abruptly charge you. “You should be far enough away to get behind the nearest tree before a galloping horse could get there,” explains Kristine Rines, wildlife biologist with New Hampshire Fish and Game and director of the state’s moose program.

Warning Signs
Anxious or agitated moose can display a range of warning signs. They may lay their ears back. The hair on the back of the neck and above the hips might stand up. They could smack their lips, show the whites of their eyes, toss their head upward like a horse, or even urinate on their back legs. If you see any of these warning signs, it is a clear indication that you are too close and in a potentially dangerous situation. However, moose may exhibit none of these warning signs—until they abruptly charge. “What people really need to understand is that these behavioral cues can happen very quickly,” notes Lee Kantar, state deer and moose biologist with the Maine Department of Inland Fisheries and Wildlife. “They can whirl and be on you in a second if they feel you’re too darned close,” Rines concurs. Based on my Alaska experience, I definitely agree.

If a Moose Charges You
An aggressive, confrontational moose is trying to do one thing: drive you off. So if a moose approaches you, back away. If it charges, RUN! Do not stand your ground. If possible, place a tree or other nearby object between you and the moose as you retreat. Once the moose has driven you far enough away, it will leave you alone. If the moose does make contact, it typically strikes first with its front hooves, using its rear legs occasionally in a prolonged assault. If a moose knocks you down, continue your efforts to escape. Sustained assaults are rare, however, and the odds of a fatal attack are extremely low. In the Northeast, there has never been a human fatality from a moose attack. (In contrast, several people die every year in moose-vehicle collisions on Northeast highways.)

Be on Guard
Any moose, at any time of year, may respond aggressively if provoked by your presence, though the chances of a confrontation increase during certain times of year. Cows with calves are particularly protective, especially in early summer when their young are most vulnerable. In the fall, bull moose often act more aggressively as they compete with other males for breeding opportunities. But no matter what the season, the best strategy is to avoid a confrontational situation in the first place. Keep your distance. If a moose is on the trail, wait for it to move along. “People get kind of edgy and impatient with moose,” Kantar concludes. “But the reality is you need to give moose time to get out of the way.”