The following is a sneak peek at one of the presentations scheduled for AMC’s 146th Annual Summit. Summit gives members of the AMC community a chance to hear from outdoor experts, honor volunteers and sit in on AMC’s annual business meeting. For ‘How Not to End Up in the Accidents Report of Appalachia Journal,’ Chris Woodside, current editor of AMC’s 145-year-old mountaineering publication, Appalachia journal, describes several accidents in popular hiking ridges in the White Mountains. The talk ends with safety principles and a Q and A.

This year’s event will be held virtually on Saturday January 22, 2022. To learn more and register please visit: https://www.outdoors.org/summit/

This story was originally published in the Winter/Spring 2022 issue of Appalachia Journal.

The morning of Monday, February 1, was a brief window of calm before a storm. With inverted weather bringing negative temperatures to the Mount Washington Valley and sun, light winds, and calm skies in the alpine zone above the cloud band, Monday was an opportunity to go above treeline before a winter storm would bring heavy snow and high winds that night. Following that snow and wind, avalanche danger would rise, and moving safely in the alpine zone would become more difficult.

Ian F., age 54, might have glimpsed the Presidentials above the cloud band as he drove over from his home in Lincoln, Vermont. A self-established legend in New England’s human-powered ski community, Ian was known for his irrepressible desire to ski the best snow around his home stomping grounds of central Vermont. He also made frequent trips to the Presidential Range to climb and ski the steep chute and gully lines that populate its flanks. On February 1, he went to ski in New Hampshire by himself, parking at the base of the summer hiking trail that ascends Ammonoosuc Ravine and climbing swiftly to treeline. With an early start and good fitness, Ian was on the summit cone of Mount Washington by 11 A.M., according to cell phone records later collected by search-and-rescue agencies.

Once up high, Ian had a choice, per his text message to a friend the previous day: whether to traverse south and ski down the snow-covered streambed of Monroe Brook from the top of Mount Monroe, or to descend directly into Ammonoosuc Ravine, following one of the multiple skiable gullies from the west side of the summit cone down toward the confluence below. “Might ski Monroe Brook depending on how the Ammo looks,” he had written, suggesting that the Ammonoosuc, steep and pinched off at points, was the desired descent, and Monroe a backup. It’s not clear, following the MWAC’s investigation (source for this write-up), if he had also scouted the entrance of Monroe Brook. In the late morning, Ian was making his first turns into the Ammonoosuc. 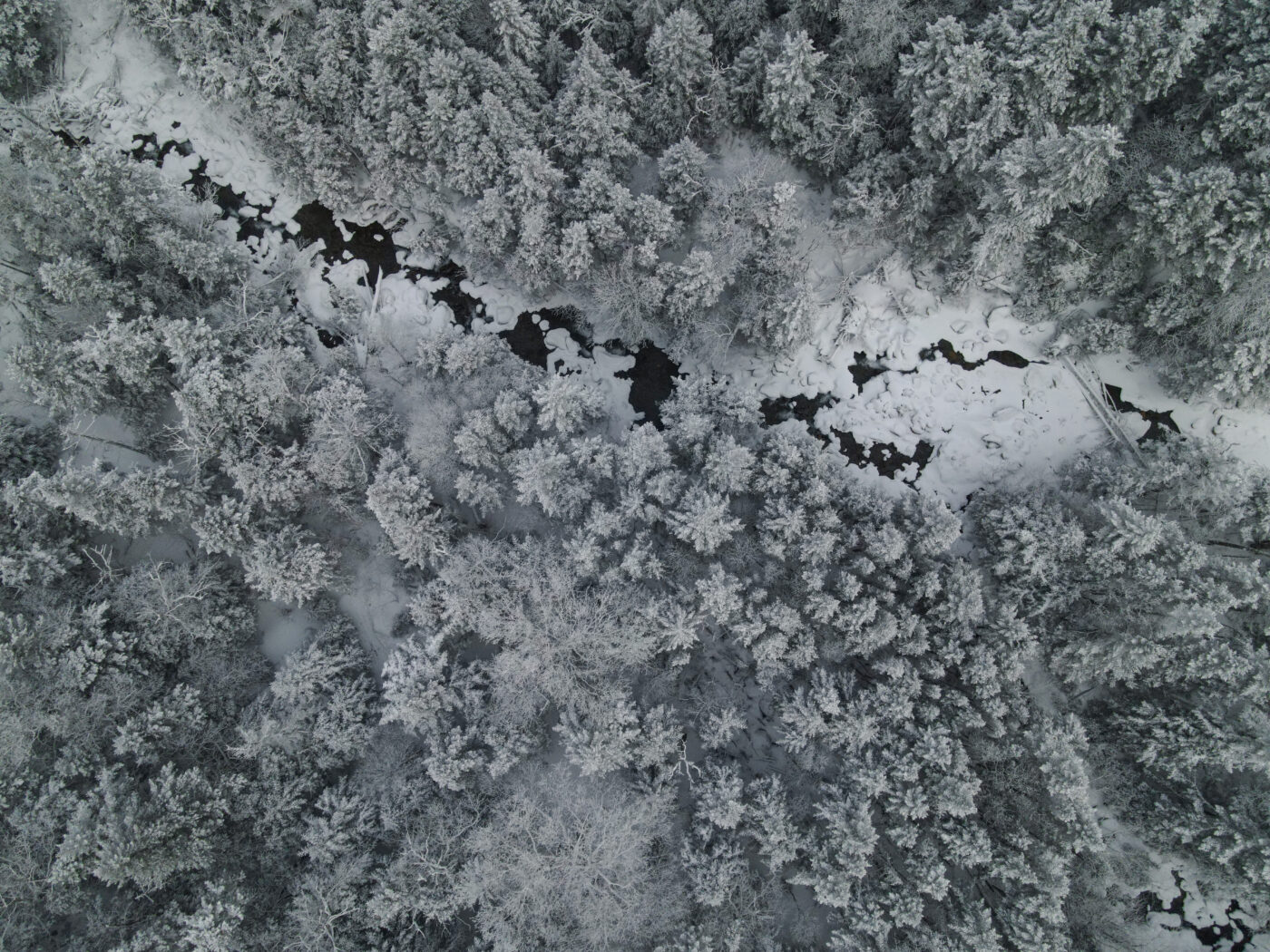 By the end of the day Tuesday—following an overnight 24-inch salvo from the winter storm—Ian’s friends in Vermont had not heard from him in more than 24 hours, and they notified NHFG of his absence. The search began on Tuesday. NHFG officers checked for Ian’s car at trailheads on both the well-traveled east side of the range and the lesser-traveled west side. COs located his car on Wednesday morning, and in coordination with the MWAC snow rangers and local search-and-rescue organizations, they began to search a variety of skiable descents in the broader Ammonoosuc drainage, dispatching teams to Monroe Brook (Ian’s backup descending route) and the Ammonoosuc Ravine summer trail (his route of ascent), as well as the upper Ammonoosuc.

As the search progressed on Tuesday, investigators used cell phone records and GPS triangulation to track Ian’s movements to the upper-central section of Ammonoosuc Ravine. Searchers focused their efforts closer to the primary ski line coming off of the summit cone. At 4:25 P.M., a search team member using an avalanche transceiver picked up a signal in a choked-off section at 4,000 feet of elevation. Other searchers converged there and used avalanche probes to penetrate the snow, trying to “strike” the victim buried beneath the debris. With a dozen feet of snow accumulated against a rock outcrop, however, they were forced to dig partially into the debris pile before they could confirm, by probing, that there was indeed a body buried beneath. 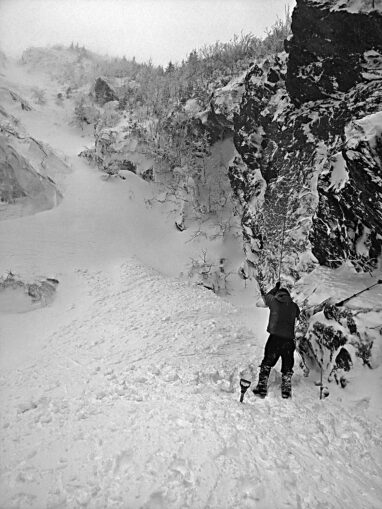 As reported by MWAC lead snow ranger Frank Carus, extricating Ian’s body from the depths of accumulated snow required the full cohort of eight searchers, who dug with foldable avalanche shovels for over 90 minutes before reaching the victim. Searchers shoveled what must have been, by a conservative estimate, 11,000 pounds of snow. Then they began the complex process of belaying Ian’s body down the technical upper stretches of the gully. From there, the team used a plastic sled to move him across the ravine to the Ammonoosuc Ravine summer trail and out to the trailhead.

What had happened in the intervening minutes between Ian’s first turns into Ammonoosuc Ravine and the snow burial that took his life? As assessed by Carus, Ian must have skied into an isolated patch of dense, reactive snow blown together by high wind—known in avalanche parlance as a wind slab—that was hidden among the firm, icy bed surface snow that made the skiing difficult, but, also for the most part, stable and predictable. The wind slab would have swept him down the steep gully and carried him into a “terrain trap” that collected the shallow snow into a deeper burial. Carus writes, “It is likely that [Ian] triggered one of these pockets and was carried into the bowl-like depression, where the snow was stopped by an overhanging cliff that was angled upslope.” This, the “first avalanche,” as it was called in the MWAC report, would have caused Ian’s death, ruled by medical examiners as asphyxia (suffocation) from burial under the snow. A “second avalanche,” triggered naturally from the quantity of falling snow on Monday night and Tuesday, had doubly covered the terrain trap where his body had come to rest.

Comment: Mount Washington is a mountain of two sides, especially for skiers. Hordes of fair-weather backcountry skiers make the pilgrimage to ski Tuckerman Ravine—“Tucks”— and the east side in the spring months, but an increasing group of more conditions-tolerant ski mountaineers descend the outlying ravines and gullies, many of which lie on the west side. Ian was unquestionably from the latter camp. Having spent many years skiing the difficult, variable conditions of Vermont’s backcountry, Ian likely found the snow surface in the Ammonoosuc on February 1 challenging, but not deterring. The MWAC report noted, “Prior photos of the Ammonoosuc terrain show expanses of ice cliffs and icy rock slabs, all of which break up expanses of snow, leaving isolated areas of bed surface”—in short, a bulletproof, icy snow layer.

Scratching down icy snow and dodging exposed rocks would not have been grade-A skiing, but Ian was known to appreciate a ski descent no matter the conditions. The MWAC avalanche forecast, published early that morning, suggests what a skier or snowboarder might have expected in the alpine zone on that Monday: “Low avalanche danger exists throughout the forecast area, though the potential for small avalanches of wind-drifted snow remains in isolated areas at mid and upper elevations.” Ian chose to go up high and ski a challenging route on a day when the snow conditions and the odds of safe travel favored him. Carus, in his assessment of the fatality, speaks less of the dangers inherent in the snow that Ian skied, and more to the question of his solitary skiing:

Even the most experienced skiers with all the correct preparations and equipment risk more when skiing alone. Even small avalanches can be deadly, especially over a terrain trap. . . . Skiing technical lines, in a thin snowpack above a notorious terrain trap, with no partners, even on a low-danger day, raises the stakes tremendously.

Solo skiing is hazardous in a way that solo hiking, for example, is not: The very core of every skier’s self-rescue system is a partner or partners who, adequately equipped with avalanche transceivers and rescue equipment, can extract them from an avalanche burial.

Not all avalanche burials are created equal, however. Despite what MWAC concluded was a relatively small initial avalanche, Ian was buried as the snow funneled up against a rocky terrain trap and collected around him. Skiers are taught to scan for terrain traps both before and as they descend, but they are often difficult to sense in advance. The sheer volume of snow that collects during a slide and then sets up to the consistency of concrete in the minutes afterward is a challenge to even the best-trained and most prepared rescuers aiming to extricate an avalanche victim.

How we assess Ian’s decision to ski alone on February 1 says a lot about who we are and how we approach the mountains. Much of the deluge of negative, internet-based commentary on solo skiing in the wake of the fatality was, to say the least, insensitive. Often those comments were “a useless exercise in hypothetically infallible self-endorsement,” as the Wyoming skier and writer Cy Whitling put it.

If anything, we skiers would do best to use Ian’s passing as a moment of reflection, to ask ourselves how we can move through the mountains, in their variable winter moods and moments, more safely and thoughtfully. This takes close scrutiny of one’s own human factors, biases, and blind spots. Says Whitling, “There’s an opportunity for growth here, but only if you enter it with a growth mindset.” We—skiers, White Mountain lovers, humans—stand to gain much more by looking to Ian’s story with humility and open-mindedness. —S.B.

How Being Outdoors Can Relieve Stress and Anxiety