Alien Abduction in the White Mountains 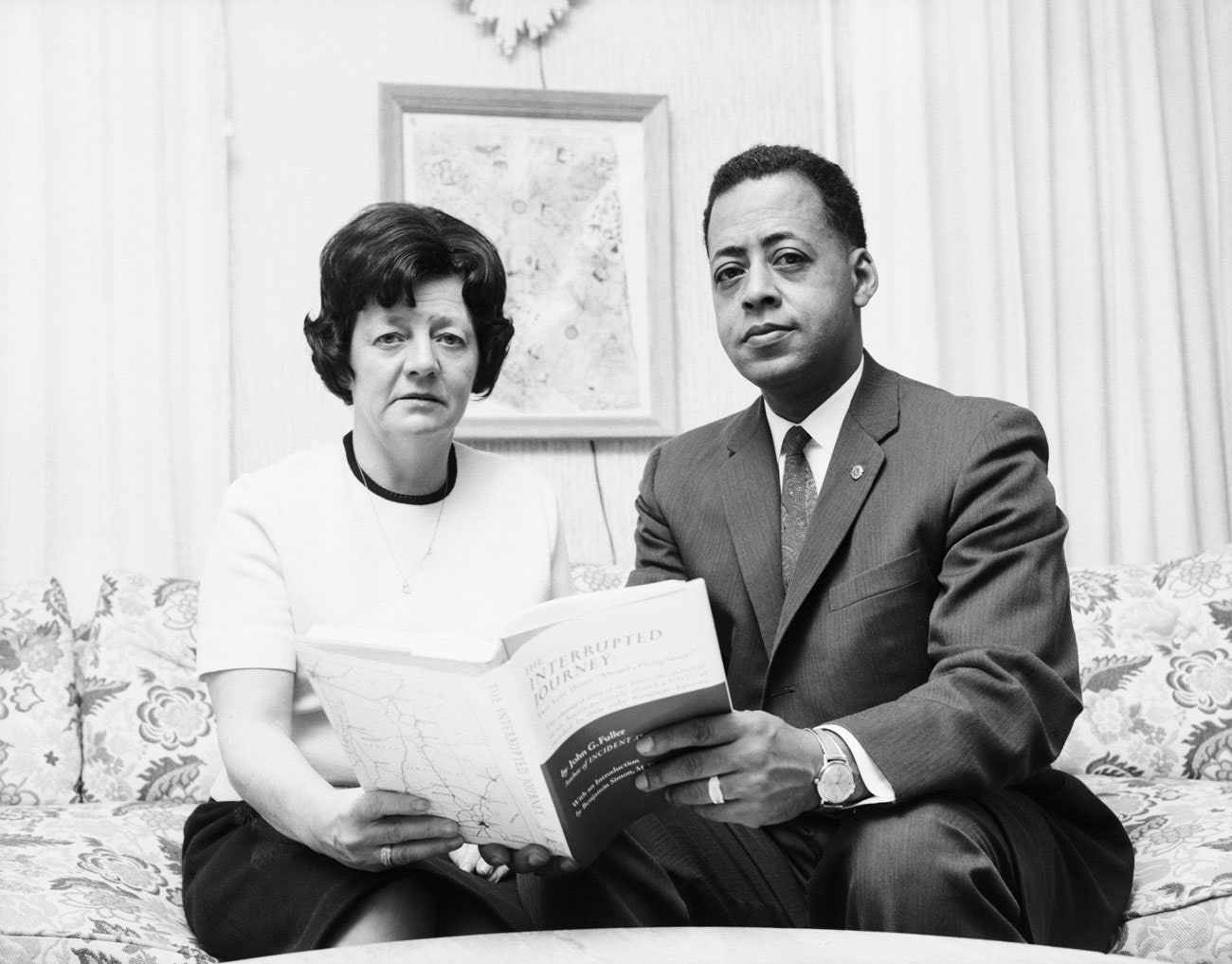 In September of 1961, Betty and Barney Hill were driving from Montreal, Canada to Portsmouth, New Hampshire, on the way home from their belated honeymoon. While driving through the White Mountains of New Hampshire, the couple experienced an extraterrestrial phenomenon that would launch them into the international spotlight and help shape the dialogue around future supernatural encounters.

Betty and Barney Hill both worked long hours in Portsmouth. Betty was a social worker who handled child-welfare cases, and Barney was a postal worker, who often drove 60 miles a day and worked the night shift. In addition to their full-time jobs, the couple also volunteered frequently.

As an interracial couple before those unions were fully accepted, the Hills were passionate about advancing the civil rights movement. They volunteered at their local church and were both members of the NAACP. After deciding to take a well-deserved break, the Hills planned a spontaneous road trip from Montreal to Niagara Falls. Though the couple had been married for 16 months, they had never been on their honeymoon, and viewed this trip as the opportune time. They got in their car and impulsively left for the three-day trip, without even stopping by the bank to get extra money.

On the last night of their trip, the Hills departed a diner in Vermont around 10 p.m. hoping to make it back to Portsmouth around 2 a.m. However, as they drove, they noticed a bright light in the sky that appeared to be following them. With every mile they drove, the light grew bigger and brighter. As a World War II veteran and a plane enthusiast, Barney Hill did not think much of the light at first. As it was the middle of the night, he figured the light could not be coming from a commercial plane or a helicopter, and assumed it was just a satellite that had gone off course.

Nonetheless, the light continued to follow them, even as they drove through the winding roads of the White Mountains. Sometimes the light would move behind the trees and disappear, only to reappear moments later.

Eventually, the couple grew so curious that they decided to pull over and investigate. Through a pair of binoculars, Betty realized that the light was not a satellite, and was actually some sort of object spinning in the air, presumably a flying saucer. Barney also grew concerned. As a pragmatic, intellectual man, he was skeptical of any extraterrestrial explanation, but he had no alternative guess as to what the light could be. The couple continued driving, until they reached Route 3 in Lincoln, when the object hovered just over 100 feet above the car.

Barney abruptly stopped, got out of the car with a handgun, and saw something that was as big as a jet but as flat as a pancake. Behind the windows of the object were beings in grey uniforms who told Barney to put down his binoculars. He tried to raise his pistol but somehow found himself unable to. Realizing that he was about to be captured, he ran back to the car and sped off. At some point, Betty and Barney Hill heard strange beeping noises from their trunk, felt drowsy, and eventually lost consciousness. 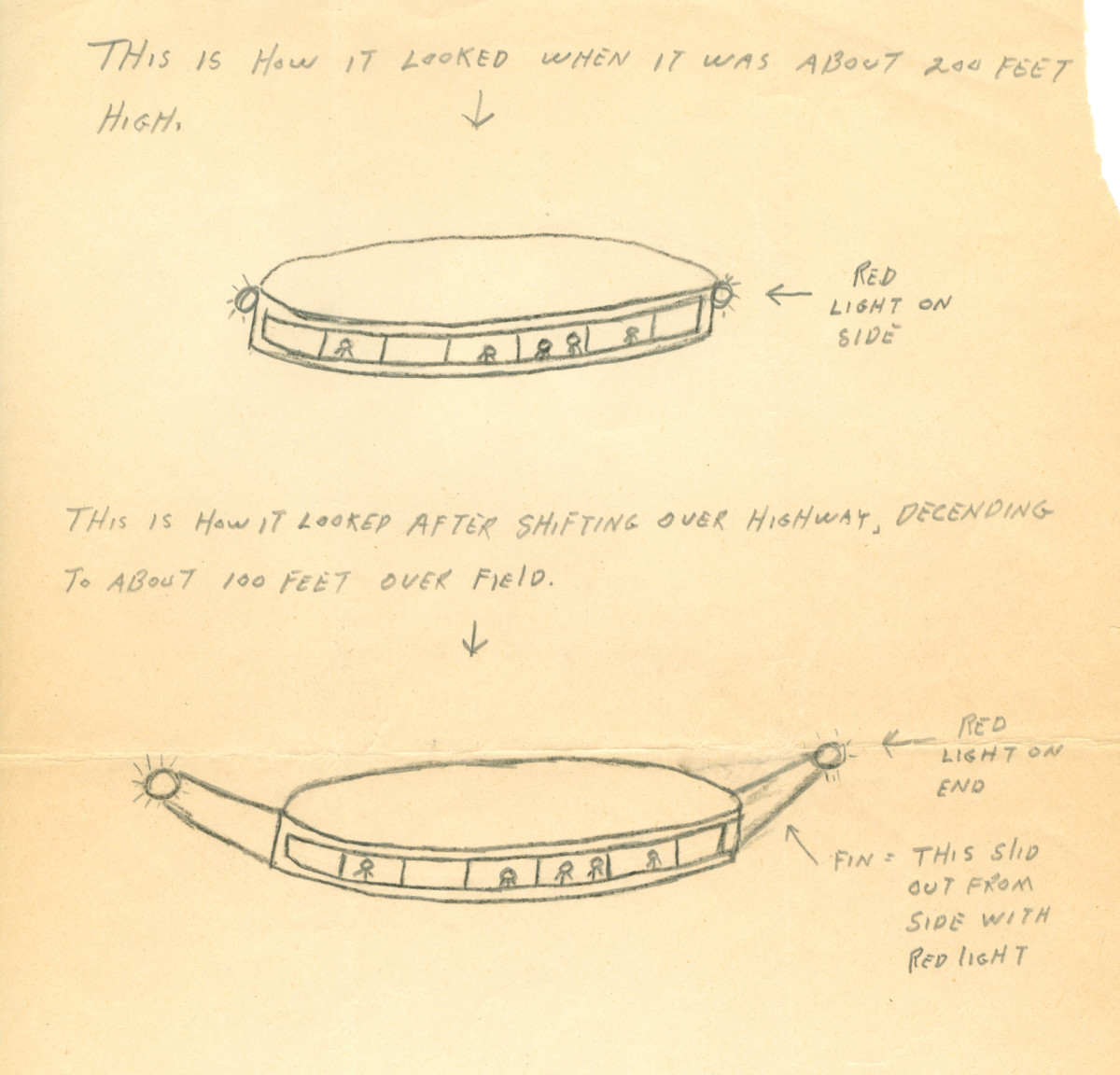 University of New HampshireBetty Hill’s drawing of the alien spacecraft

The next morning, the couple woke up in their house in Portsmouth, with no recollection of the events that occurred the night before. However, Barney’s shoes had been scuffed, Betty’s dress had been torn, and both of their watches had stopped working. Trying to piece together what happened, Betty spent hours in the library reading about the National Investigations Committee on Aerial Phenomena (NICAP), a civilian UFO group. She also filed a report to the Air Force, concerned about radiation. In the next couple of years, the couple suffered from disturbing dreams and anxiety. They began seeing a psychiatrist named Benjamin Simon, who helped them piece together what had happened on that night. 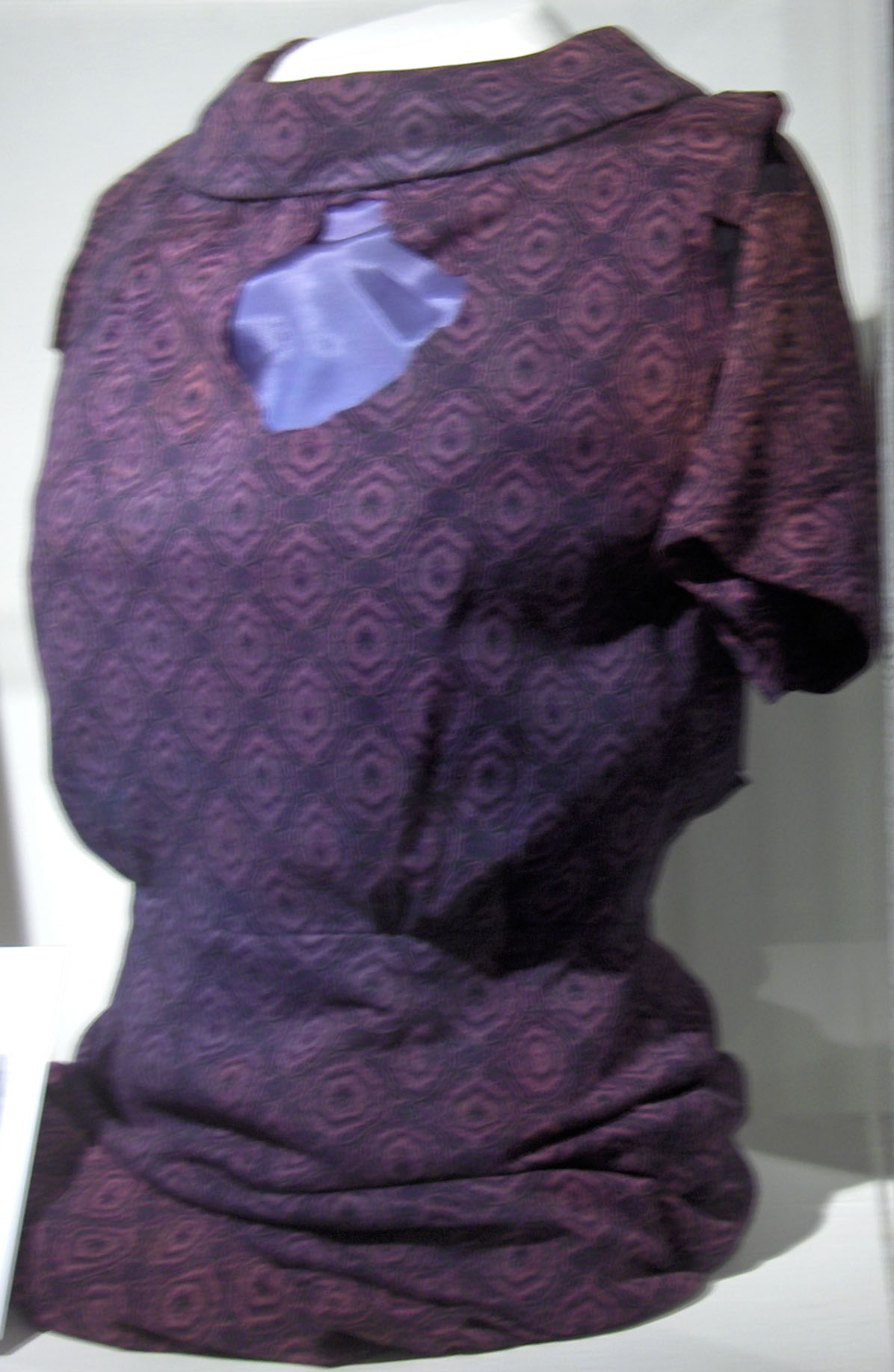 Through months of sessions and hypnosis, a popular technique at the time, the couple began to recall what happened to them. According to the Hills, the UFO had landed on their car as they were speeding down the mountains and put them to sleep. Afterwards, the grey beings they had seen earlier had led them up a long ramp into the spacecraft. Once inside, the Hills were separated and individually tested. They were asked to climb on a metal table and remove their clothes, where the grey beings would pluck their hairs, take clippings from their nails, and peel off parts of their skin. Each sample was placed on something that resembled a glass slide. The grey beings also probed needles into their arms, legs, and heads. Betty recalled that one needle was even inserted into her stomach as a pregnancy test.

Throughout the ordeal, Betty and Barney Hill claimed that one of the beings was the “leader” who was observing the process from the side. Later, alone with the leader, Betty asked where the craft had flown. Under hypnosis, she replicated the star map shown to her on the ship. Years later, a woman named Marjorie Fish attempted to interpret Betty’s reproduction of the map, and concluded that the beings had come from the star system Zeta Reticuli.

Though the story of Betty and Barney Hill was not the first tale of alien abduction, theirs was the most well-documented and feasibly legitimate. After this encounter, Betty Hill continued doing research on UFOs for the remainder of her life, and the story of the Hills became one of the most widely publicized alien encounters in history. It even shaped the way alien encounters are discussed today in the media.

Before the Hill’s experience, aliens were portrayed as friendly creatures who would commute back and forth between Earth and their home planets. However, after the Hill’s shared their story, alien abductions became better known for their mystery and intrigue. Alien movies and sci-fi novels, like the X-Files, started to include common tropes, such as medical examinations and missing time. Although the Hills have both since passed away, their legacy and the events that occurred in the White Mountains in 1961 have not been forgotten. 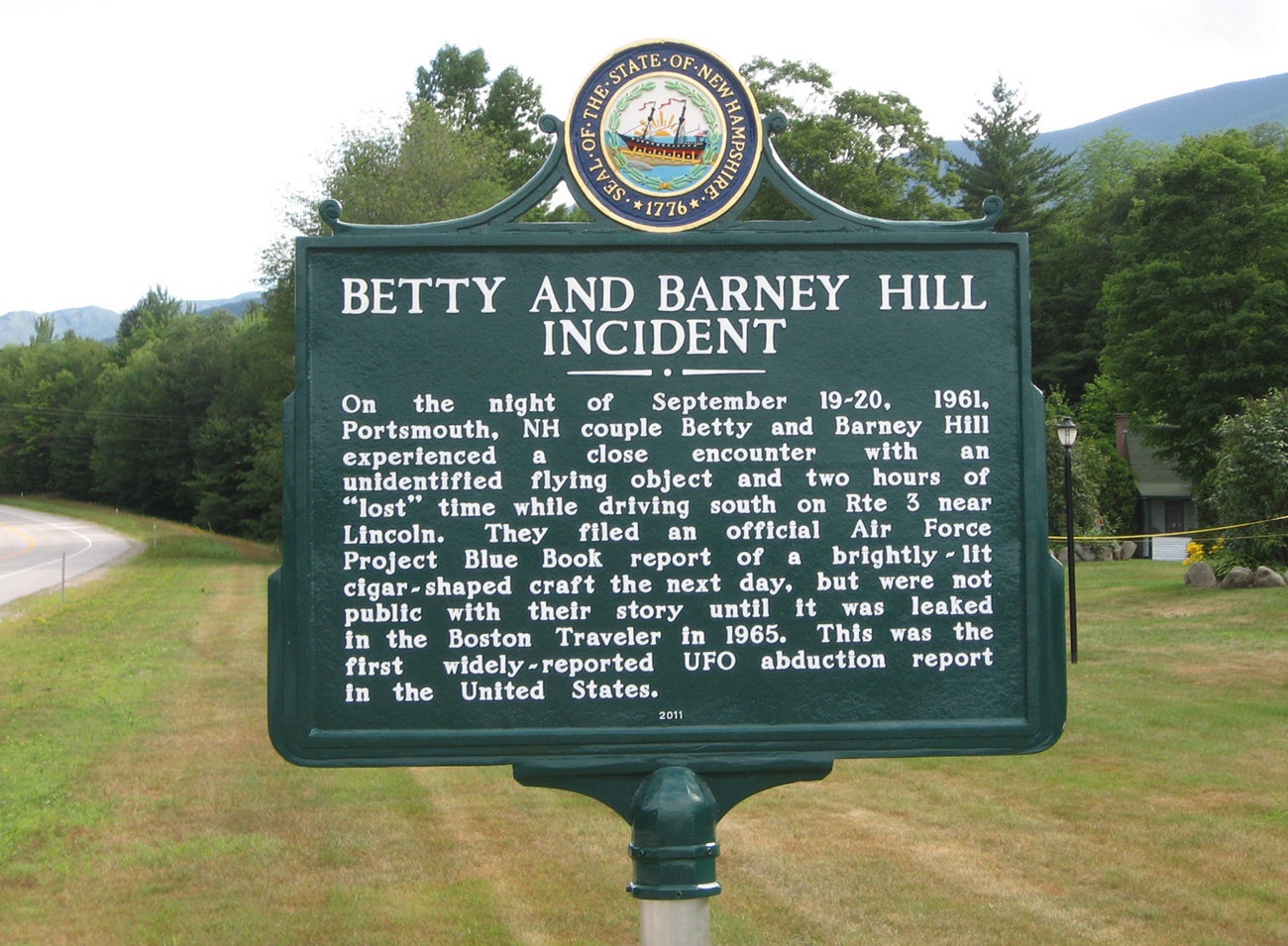