The Towering Mapmakers: Mount Washington and the Early Efforts to Map the White Mountains 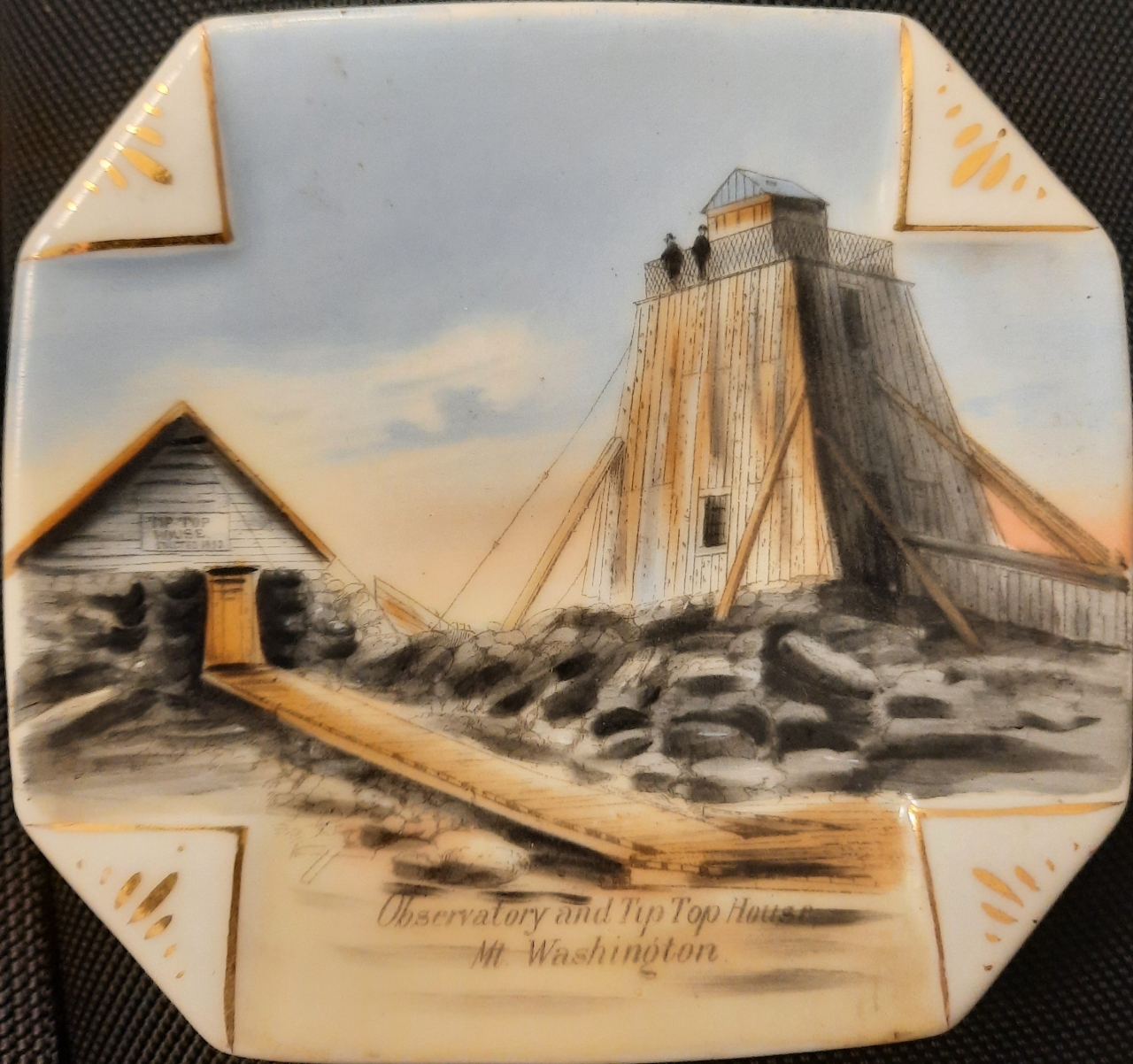 From virtually the moment the Appalachian Mountain Club formed in 1876, members were trying to make maps of the White Mountains.

“Being unable to find a reliable map of the White Mountains, I made up my mind to try and make one for myself,” wrote AMC Recording Secretary John B. Henck in the April 1876 Appalachia journal, the inaugural issue.

Henck’s essay, titled “New Map of the White Mountains,” called on members of the brand-new club to begin work on an accurate and reliable survey of the mountains they loved.

At its start, AMC was comprised nearly to a person of professors, engineers, naturalists, and scientists—many from Ivy League Universities—many of whom enjoyed surveying as a hobby or their profession. These men—yes, they were nearly all men—carrying survey equipment like alidades or theodolites up to summits on their excursions the way hikers today carry trail mix.

By 1880, all the elements were in place for what would essentially become the first common hikers guide to the Presidential Range in the White Mountains. AMC members, including co-founders Sam Scudder and Edward Pickering, along with councillors whose names would become associated with trails and summits like Charles Hitchcock and J. Rayner Edmands were gathering data on elevation and location.

At the same time, member Elihu T. Quimby, a Dartmouth geography professor, had been working for the United States Coastal Survey (which eventually became the United States Geological Survey), using his students and assistants to take readings around the state for the quadrangle maps the government was building. Once the coast line had been mapped, the government turned its attention inland.

Tourists were staying at the stone hotels at the summit of Mount Washington. A working, accurate trail map was the last piece of the puzzle. Only one obstacle remained. The top of New England—Mount Washington’s summit—had become the primary survey position, but Quimby, Edmands, and William Pickering, Edward’s brother, needed to get above the increasingly crowded summit to take their readings. As unlikely as it seemed given Mount Washington’s open summit, they needed to build a tower.

This would be expensive and difficult work. But Quimby had a plan. 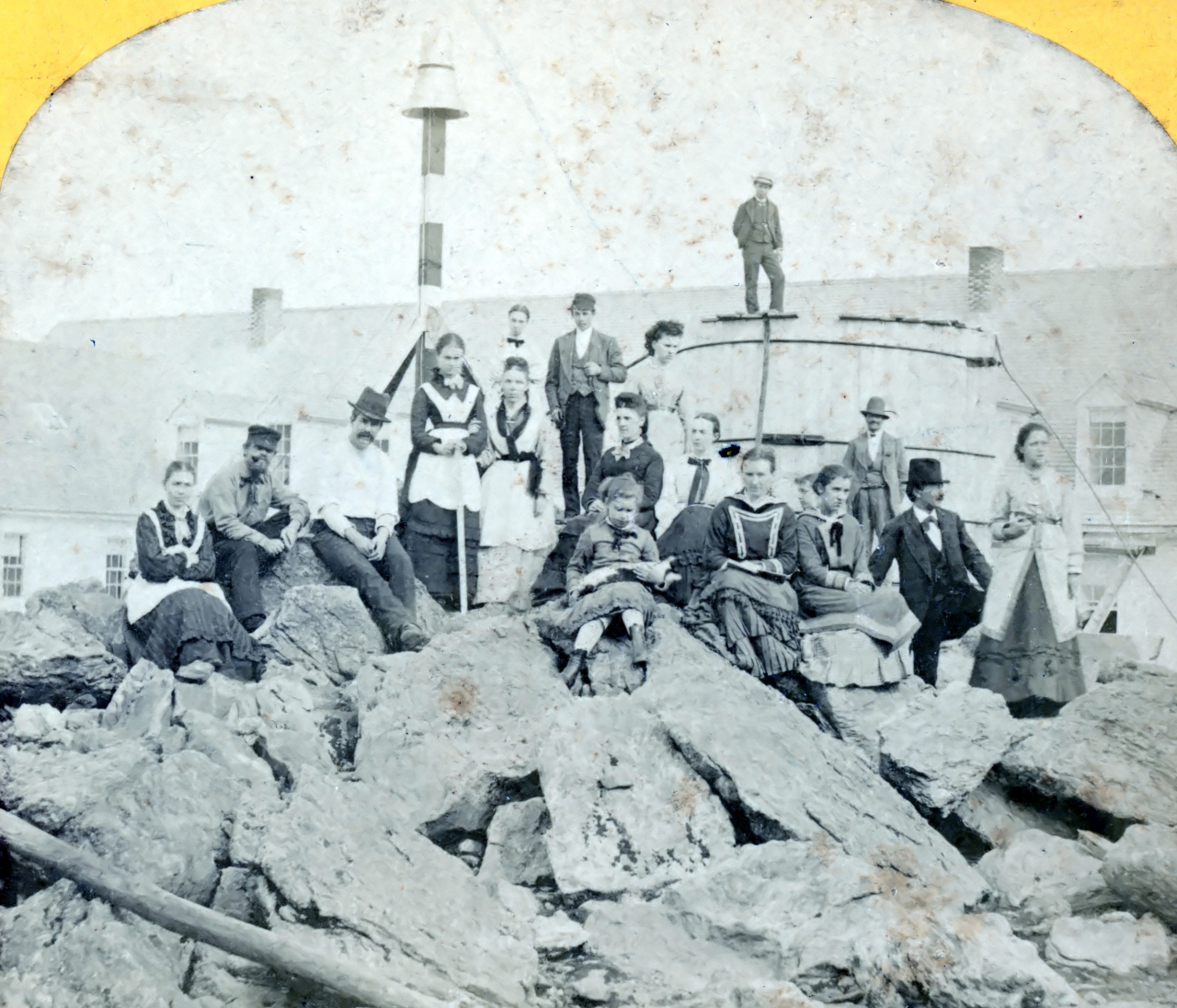 THE RON WALTERS COLLECTIONVisitors to Mount Washington’s summit in front of the Tip-Top House and a signal pole used for triangulation, ca. 1876—the same year AMC was founded and just four years before construction of an observation tower wrapped up.

There had already been a tower on Mount Washington. In 1854, developer Tim Easton paid the exorbitant price of $500 to erect a wood-framed tower with a hand crank elevator at the summit. He charged tourists $0.50 per person to go to the top.

“That was a complete failure,” says Ron Walters. In an interview, the Merrimack, NH historian talked about his research on the summit tower. “People figured they were already high enough and didn’t trust the mechanism. He sold it for scrap two years later for 30 bucks.”

Quimby began trying to convince the government to pay to construct a survey tower. For two decades, he was never successful. In an 1877 issue of Appalachia, Edmands writes that the lack of congressional appropriation for a tower is a “matter of deep regret.”

So, Quimby did what any smart academic seeking funding would do: Hat in hand, he turned to private organizations, in this case to The Cog Railway. Since 1869, the Cog had been taking tourists to the summit, and since 1873, customers had been able to stay in the Cog’s 91-room hotel, the Summit House.

Quimby’s pitch was simple. The Cog would build a tower to the specifications of the survey team, Quimby and his team would use it to do the survey work, and the Cog could attach it to the hotel and charge tourists to use it.

The Cog enthusiastically accepted the terms. In a July 1880 edition of the Mount Washington summit newspaper, Among the Clouds, a blurb announced that Quimby would begin work on his tower as soon as the weather was clear. Cog Railway engineer Walter Aiken proudly proclaimed that the tower would be built to stay as a “permanent feature.”

And so, work on the great Mount Washington tower finally began. 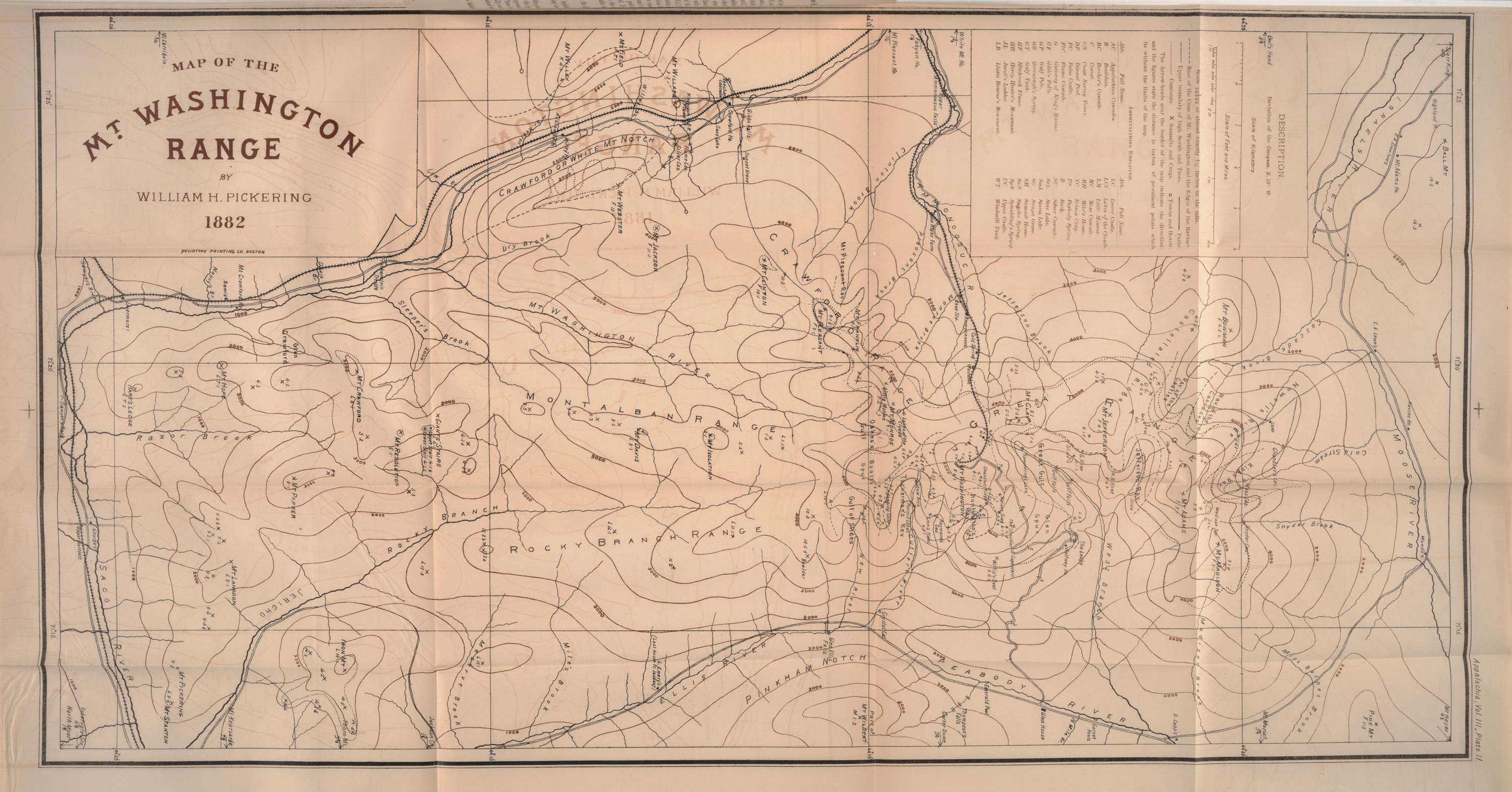 The primary challenge of building a tower at the site of the “world’s worst weather” in the late 19th century is the same as it’d be today: the wind.

“The instruments couldn’t be affected by the wind,” Walters said. “So, they built a giant log tripod and then encased it in an outside shell.”

The tripod was 27 square feet at the base, tapering to a 14-square-foot top. Inside the shell, eight 9-inch spruce timbers reached from the foundation to the top. The structure was then covered in heavy planking and clapboard, but even then, the weather was so severe that moisture was always penetrating the tower.

Still, the tower was finished in the summer of 1880. Tourists began going up for $0.10 a person. And with perfect sight lines over the tops of all the summit buildings, AMC engineers and scientists began triangulating the White Mountains in earnest.

Once the tower had been built and the data began coming in, building the first hiker map was easy. By June 1882, Appalachia issued a copy of the map and Pickering authored an accompanying field guide called Walking Guide to the Mt. Washington Range, considered AMC’s first guide book. Suddenly, hikers and tourists had a reliable map, and the doors to hiking in the White Mountains had been flung wide open.

By the early 1890s, the Pickering brothers had moved on from mapmaking and the AMC, turning their focus to astronomy. William Pickering discovered the Saturn satellite Phoebe in 1899 and predicted the existence of Pluto. Finally, in 1911, the great mapmaker moved to Jamaica, spending the final years of his life at his Woodlawn Observatory in Mandeville. But his original White Mountain map was used as the basis for AMC maps extending well into the 20th century.

But what of the original tower? As it turns out, the Mount Washington tower had one more illuminating chapter to its life. 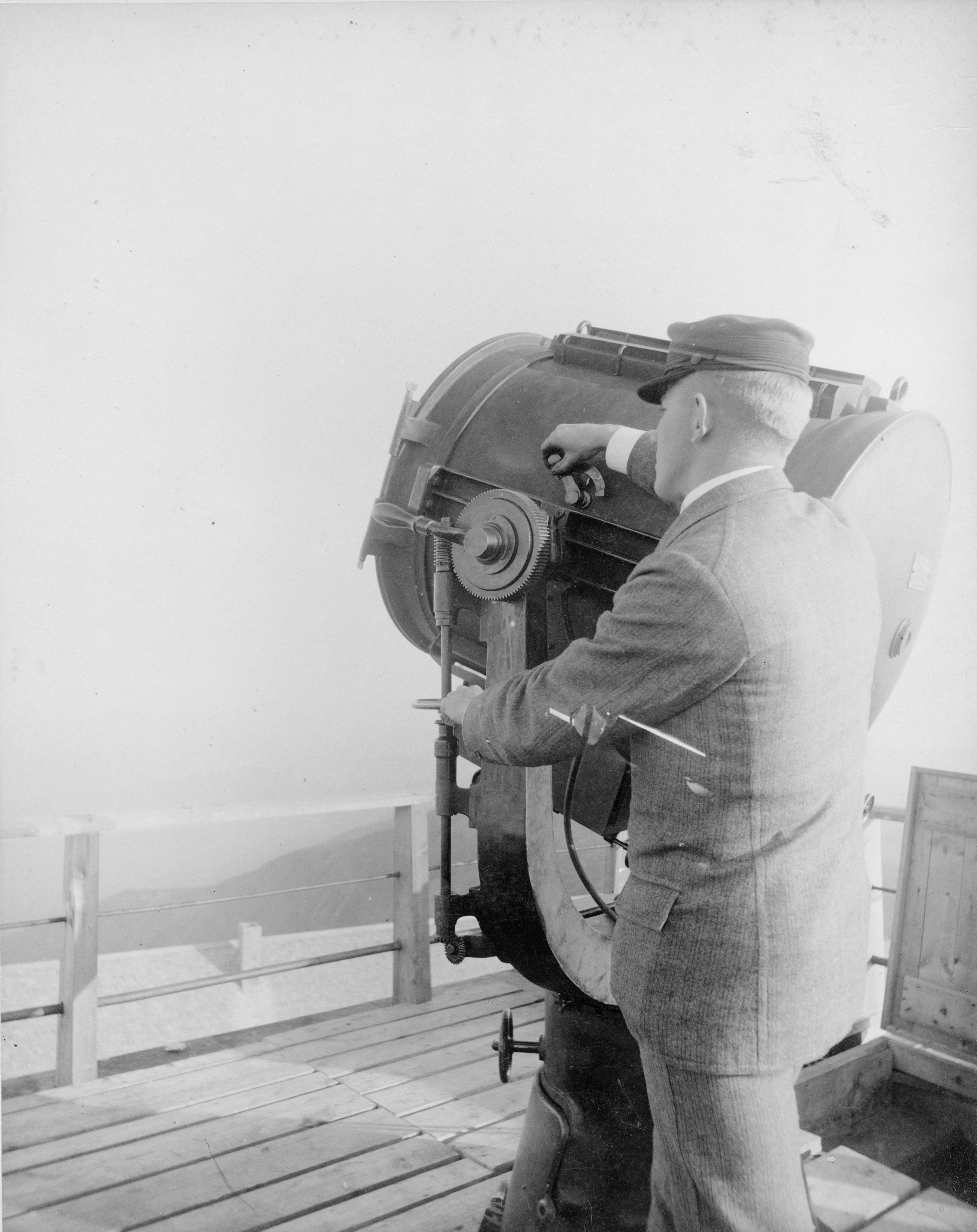 The initial idea for installing a massive steam-powered electric searchlight at the top of the Mount Washington Tower appears to have originated from the mind of salesman Lewis Rogers. He was a selling agent for Thomson-Houston Electric, a maker of generators, or dynamos.

The proposal, which The Cog Railway accepted in 1882, was that the searchlight would be funded through hotel and railroad subscribers and there would be a $0.25 admission to go to the top. The tag line for the whole operation was jokingly referred to as “moonlight for sale.”

But it was no joke. In fact, the light became a wonder of modern science. According to a visiting reporter, the tower spotlight was so bright, that were the light to be shined on Fabyan’s, eight miles away, in the middle of the night, it would be enough light to read by. The spotlight was so popular that people in surrounding villages near the mountain would light bonfires at night in the hope that the spotlight operators would turn the beam toward them.

Tower operators even considered using the light as a beacon to aid lost hikers, a sort of lighthouse to show hikers the way.

Rogers had other ideas, though, and the searchlight didn’t last long, according to Walters. Seeking a great audience for such a wonder, the following season, Rogers moved the light to Manchester, N.H., and installed it on a tall building in the center of the city. In Rogers’ mind, the light could be used as a “cloud projector” to beam news and advertisements into the sky. In fact, Pickering lent him several lenses with which to experiment.

But then the story about the tower’s whereabouts gets fuzzy. The light moved to Boston, and then on to either the Chicago Columbian Exposition in 1893 or Mount Echo in California. Rogers himself moved to Ohio, and the great Mount Washington searchlight became a thing of legend.

Back in New Hampshire, the tower, no longer serving a cartographical purpose, became a simple observation platform. As tourist traffic decreased, however, maintenance also ground to a halt and the mountain’s infamous weather began to take its toll.

So, in 1902, without much fanfare, the tower was taken down and another important chapter in the mapping of the White Mountains closed.

The tower and early AMC members that first conducted surveys there were critical to mapping the White Mountains. As Edmands himself wrote about that first map and book in the typical understated fashion of the day, “Pickering’s little book and map will prove a valuable aid to further work on the topography of the Presidential Range.” He was right.