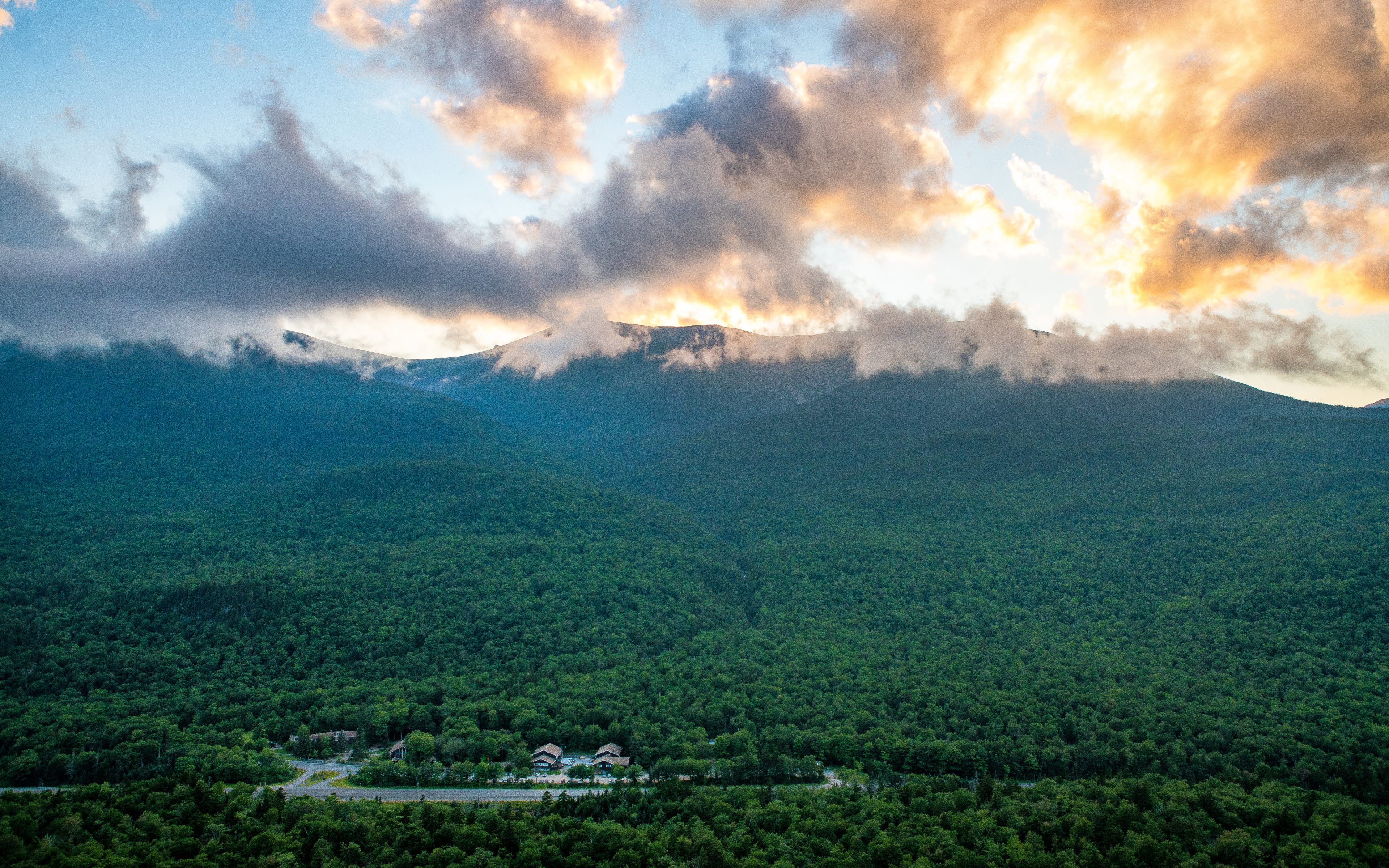 Chris Shane and AMC Library and ArchivesA short hike up Square Ledge offers postcard views of Pinkham Notch Visitor Center, gateway to some of the best hiking and skiing in the White Mountains.

This year marks an important milestone for AMC. It’s the 100th anniversary of the opening of Pinkham Notch Visitor Center, the headquarters of AMC’s hut system and a base for some of New Hampshire’s best outdoor recreation. Nestled below Mount Washington’s eastern slope, Pinkham is a starting point for some of the steepest and most rewarding trails in the White Mountains. The famed Tuckerman Ravine towers over the camp, beckoning the bravest skiers in winter and spring who dare to tame it (or try, at least). Back in 1920, Pinkham was just two small cabins and some tents, and all the way until 1990, it was known as Pinkham Notch Camp. Today, it has expanded into a multi-building complex that serves food, provides overnight lodging, showers, gear demos, educational courses, guided trips, daily weather and trail advice, and so much more.

Most of us experience Pinkham in short bursts; we use Joe Dodge Lodge, Pinkham’s rustic bunkhouse, as our base for adventure for a few days before returning to our lives. But for the croo that live and work at Pinkham, celebrating 100 years means a little bit more, and lucky for us, we have 100 years of stories, many of them detailed in AMC’s Appalachia journal. We found firsthand accounts of croo members caring for visitors, descriptions of how modern technology improved the camp’s efficiency and services (hello, indoor plumbing and hydroelectric power), and even evidence of indelible marks left on the club by events like World War II and the Great Depression.

The images and stories you’ll enjoy on the following pages are just snapshots, but through them you may realize what was clear to us: Pinkham Notch Visitor Center isn’t merely a destination, but a home. 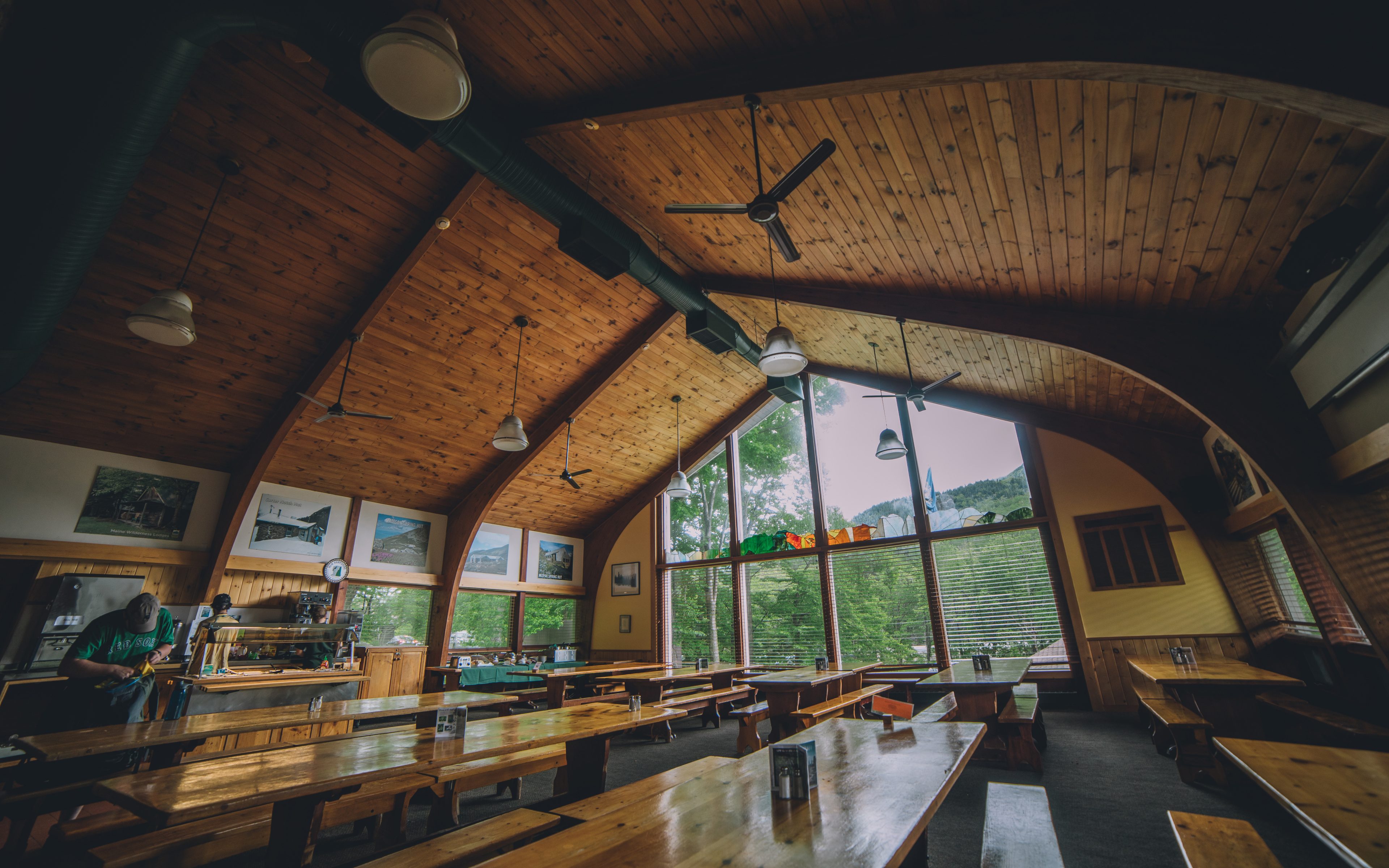 Paula ChampagneThe Pinkham Notch Visitor Center we see today went up in 1969 with the construction of the new Trading Post and Rockwood Administration Building. Both day and overnight visitors will recognize the vaulted roof and stained glass windows of the dining hall, where AMC’s croo serves three meals a day to hungry adventurers.

Pinkham Notch Visitor Center sits right on the Appalachian Trail, offering a much-needed refuge to thru-hikers after completing a strenuous traverse of the Presidential Range. For day hikers, Pinkham provides access to some of the best hiking in the White Mountains—including Huntington Ravine, Boot Spur, and the Wildcat Ridge trails—and serves as a base camp for many wishing to summit Mount Washington. 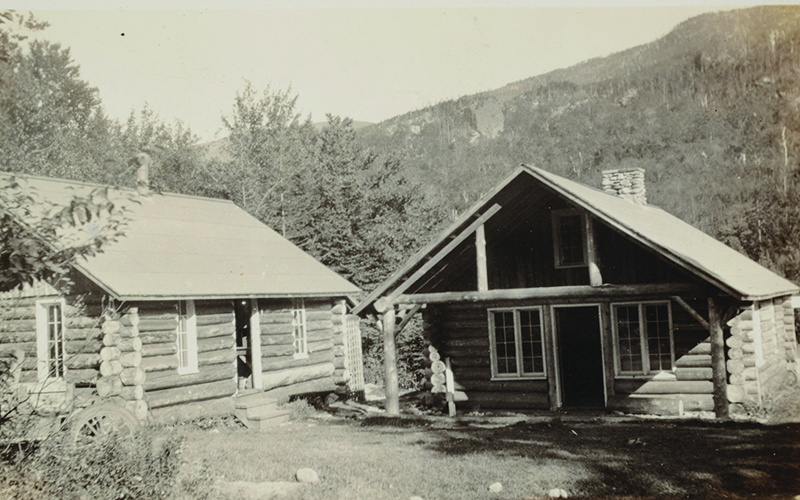 Photo courtesy of AMC ArchivesThe original Pinkham Notch Visitor Center was comprised of two classic log cabins with gable roofs and porches, plus nearby tent platforms. Each cabin could hold up to 20 guests. A mention of the campground in the November 1920 edition of Appalachia boasts of available parking and safety for travelers coming up to the region. When Pinkham Notch Visitor Center opened in 1920, a room cost $0.75 per night. 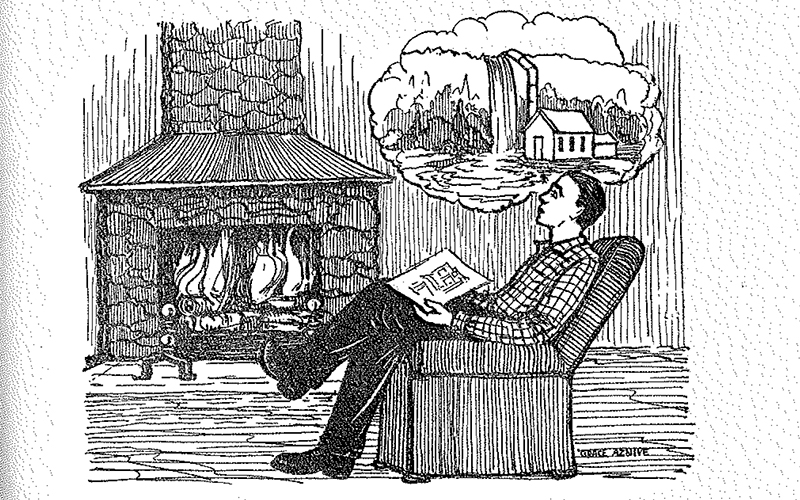 Photo courtesy of AMC ArchivesIn 1939, AMC huts manager Joe Dodge dreamed up the idea to engineer a hydroelectric plant at Pinkham Notch that would “pay for itself, through savings in operating costs” according to AMC’s 1938 annual report. 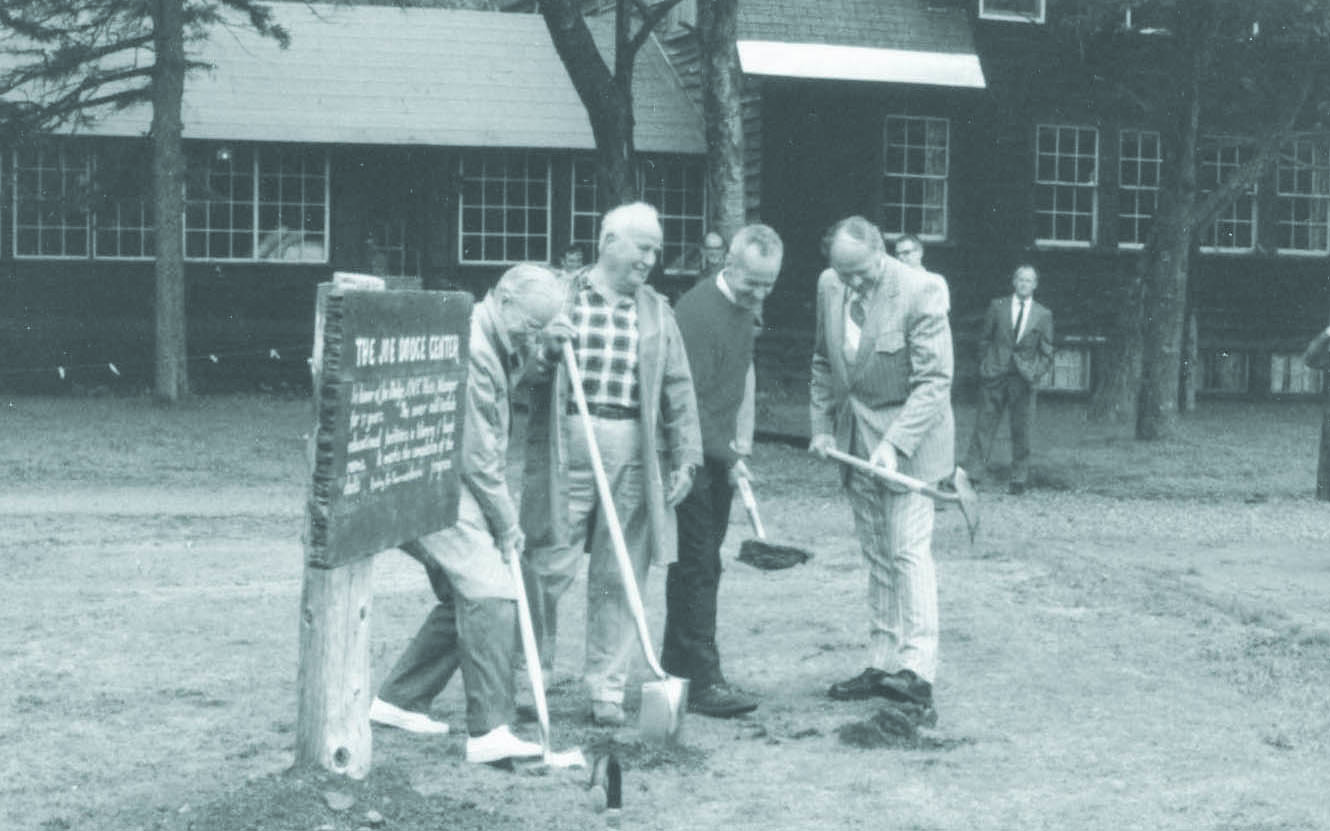 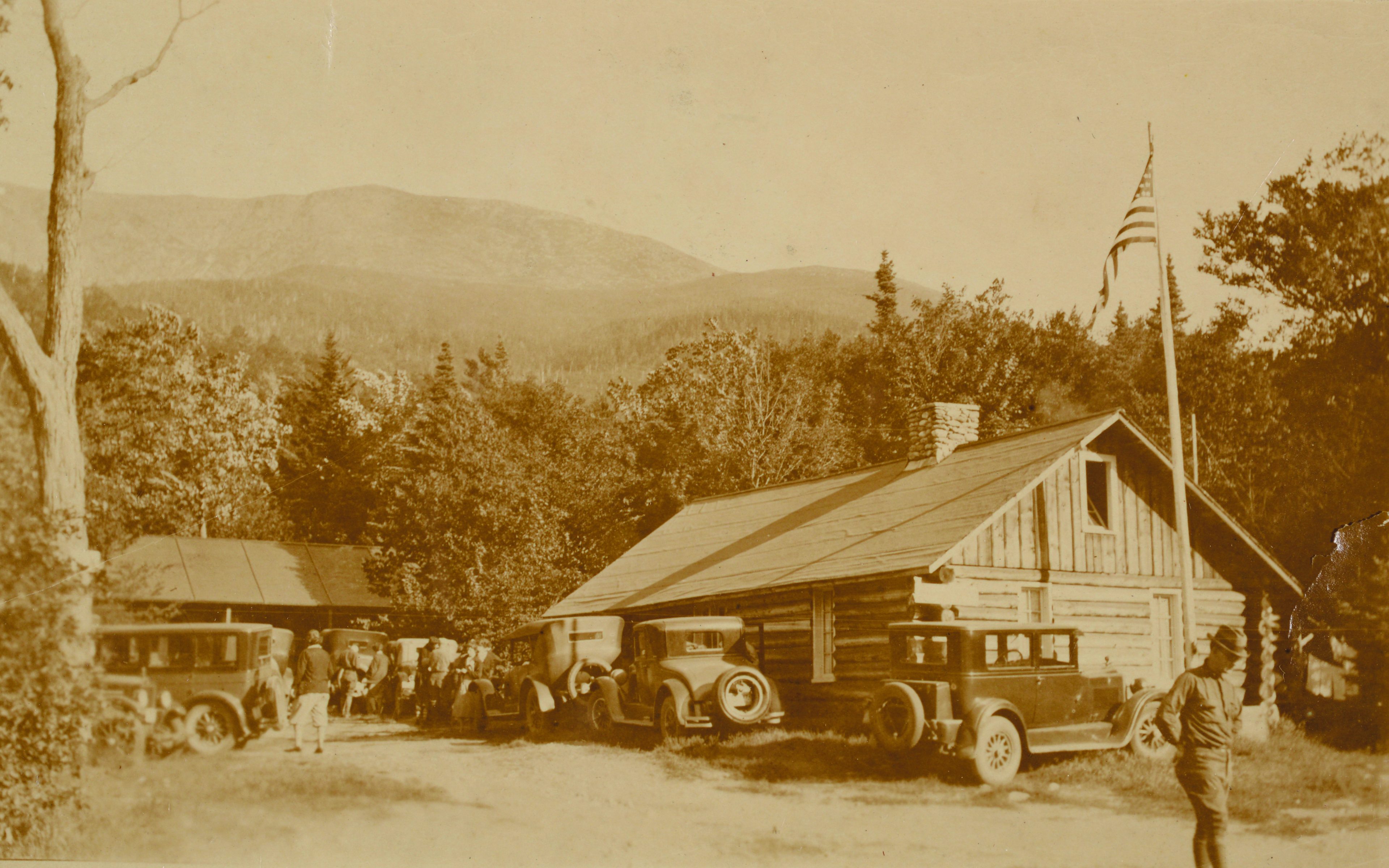 By 1920, the growing popularity of recreational car camping attracted vacationing families from all across the Northeast to the White Mountains. “Cars were getting bigger, and people realized you could use them to travel for vacation, and the rise of car camping almost immediately followed,” says Becky Fullerton, AMC’s archivist. “The problem, though, was that back then you could pull over and camp wherever you wanted.” The solution, according to Fullerton, was to build campgrounds close to popular trails, and provide secure parking for these vehicles. “It was a way for AMC to capitalize on the car phenomenon, and help the [U.S. Forest Service] control the car camping crowds.” 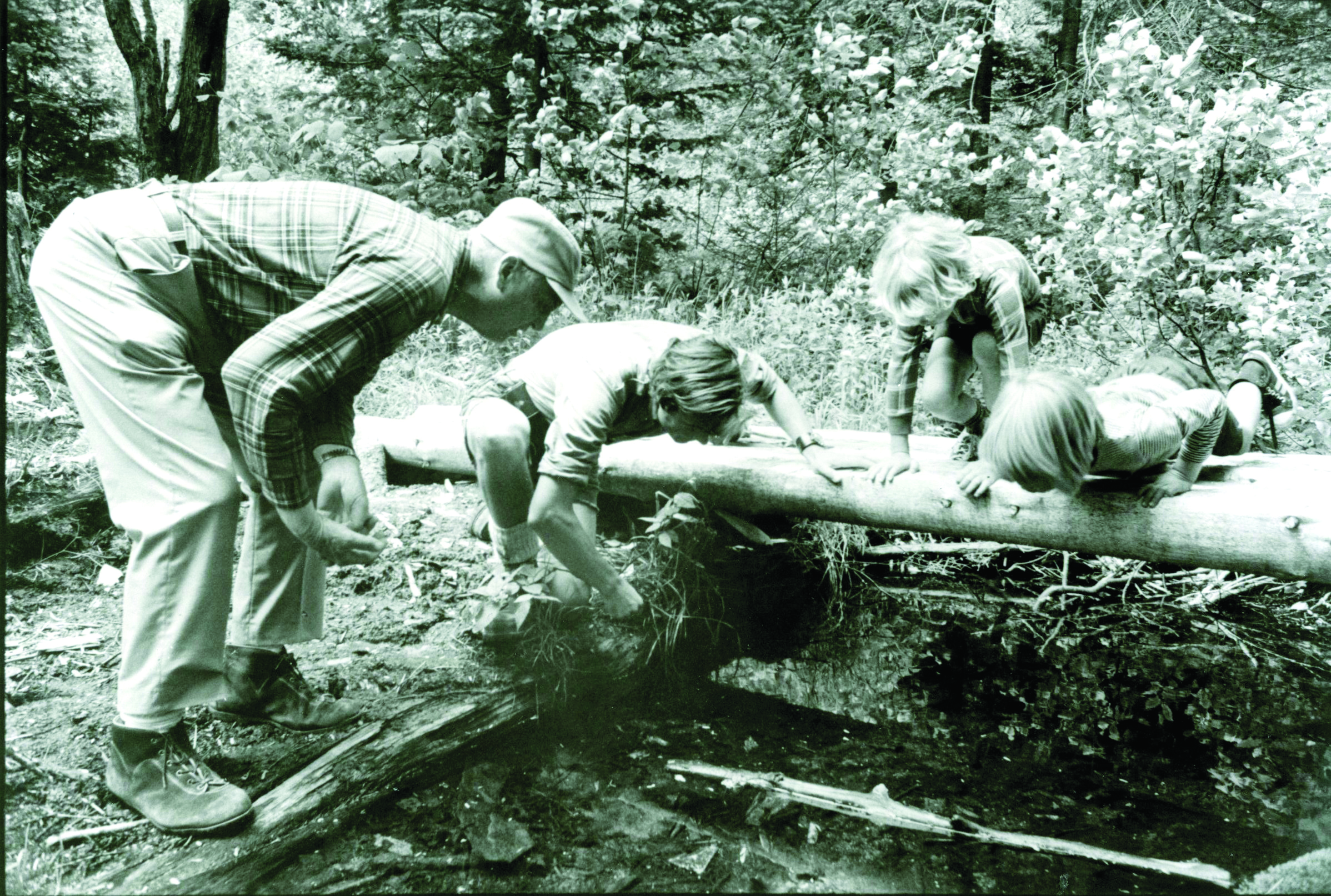 Photo courtesy of AMC ArchivesNaturalist programs have long been a staple of education at Pinkham Notch Visitor Center, where visitors get a hands-on understanding of the ecology of the area. Here, we see young children joining a naturalist in 1975 as they wander the grounds near Pinkham and find new and interesting features on the trails. 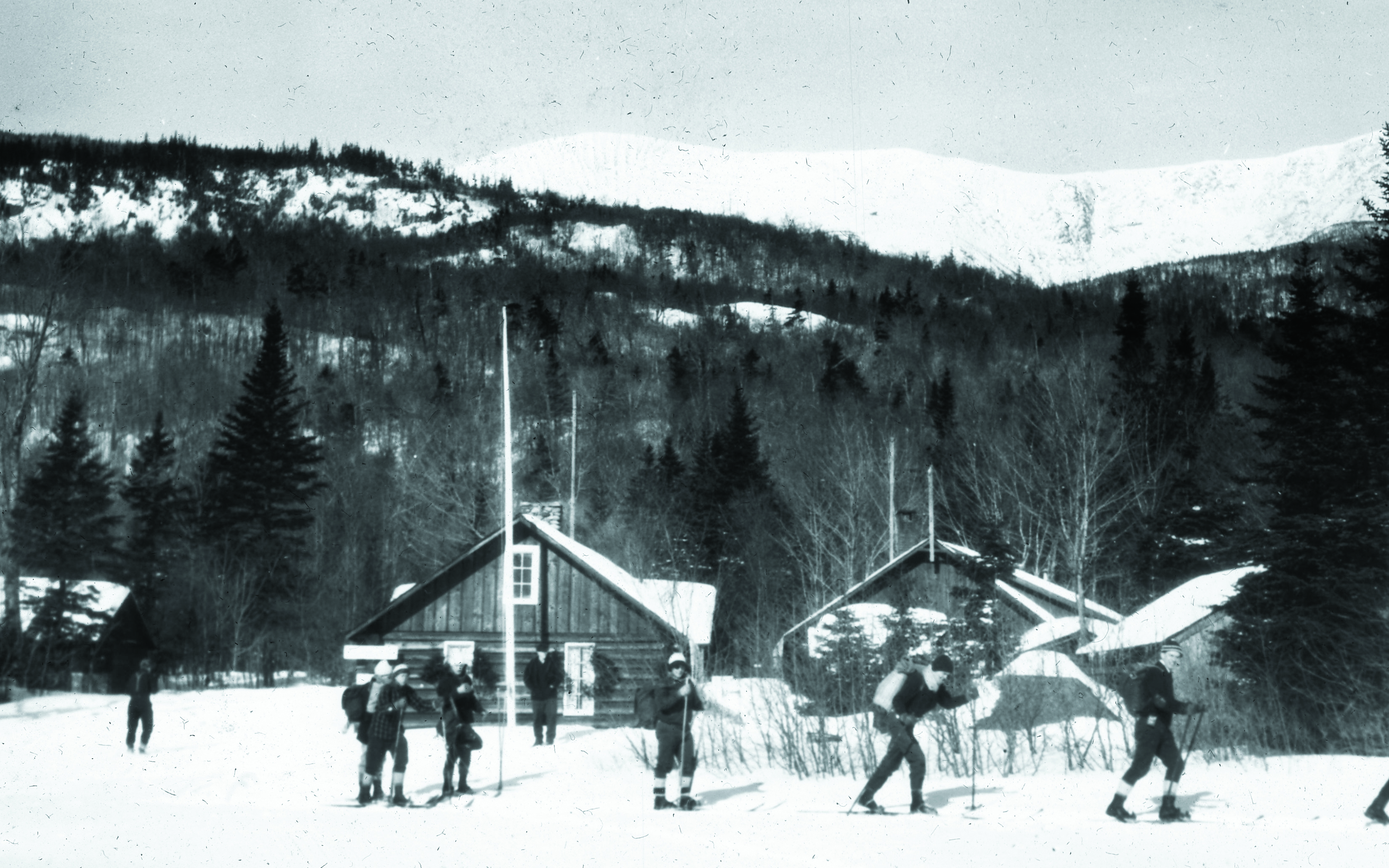 Courtesy of AMC ArchivesBackcountry skiing has long been synonymous with Pinkham Notch Visitor Center, given the lodge’s proximity to Tuckerman Ravine, a slope destined for the most advanced skiers. Brooks Dodge, an Olympic skier and son of Joe Dodge, grew up skiing here, braving steep drops and avalanche threats. In the spring, hikers are known to visit the base of the bowl to watch skiers. In 1934, AMC completed its winter lodge at Pinkham Notch to fully accommodate the ski boom, with a new cabin that could house up to 27 guests, plus a room for the camp’s assistant manager. 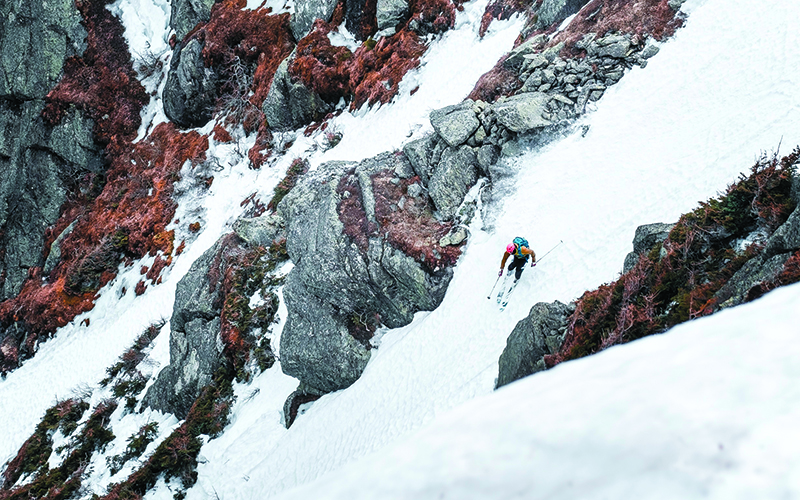 Photo by Nick Tartaglione/AMC Photo ContestWhile Tuckerman Ravine receives the most attention for springtime backcountry skiing, nearby Boott Spur features one of the steepest chutes in the Northeast. Made famous by Joe Dodge himself, Dodge’s Drop is just that, a steep drop into a rock line chute that falls down to Hermit Lake below.

Pinkham Notch claims home to the Abenaki tribe, an indigenous people who are today one of the five tribes in the Wabanaki Confederacy. While the Abenaki span from Quebec, through portions of Maine, and into New Hampshire, Mount Jasper, located just 20 miles north of Pinkham Notch Visitor Center, was a sacred peak for the tribe. As European settlers started to inhabit the area, the Abenaki set up a trading post in Intervale, N.H., to sell and trade. In 1774, a road was built through Pinkham Notch, allowing European–Americans to settle into the area and access routes up to Mount Washington. In 1909, AMC took over management of the land where Pinkham Notch Visitor Center stands today, leasing it from the Umbagog Paper Company. 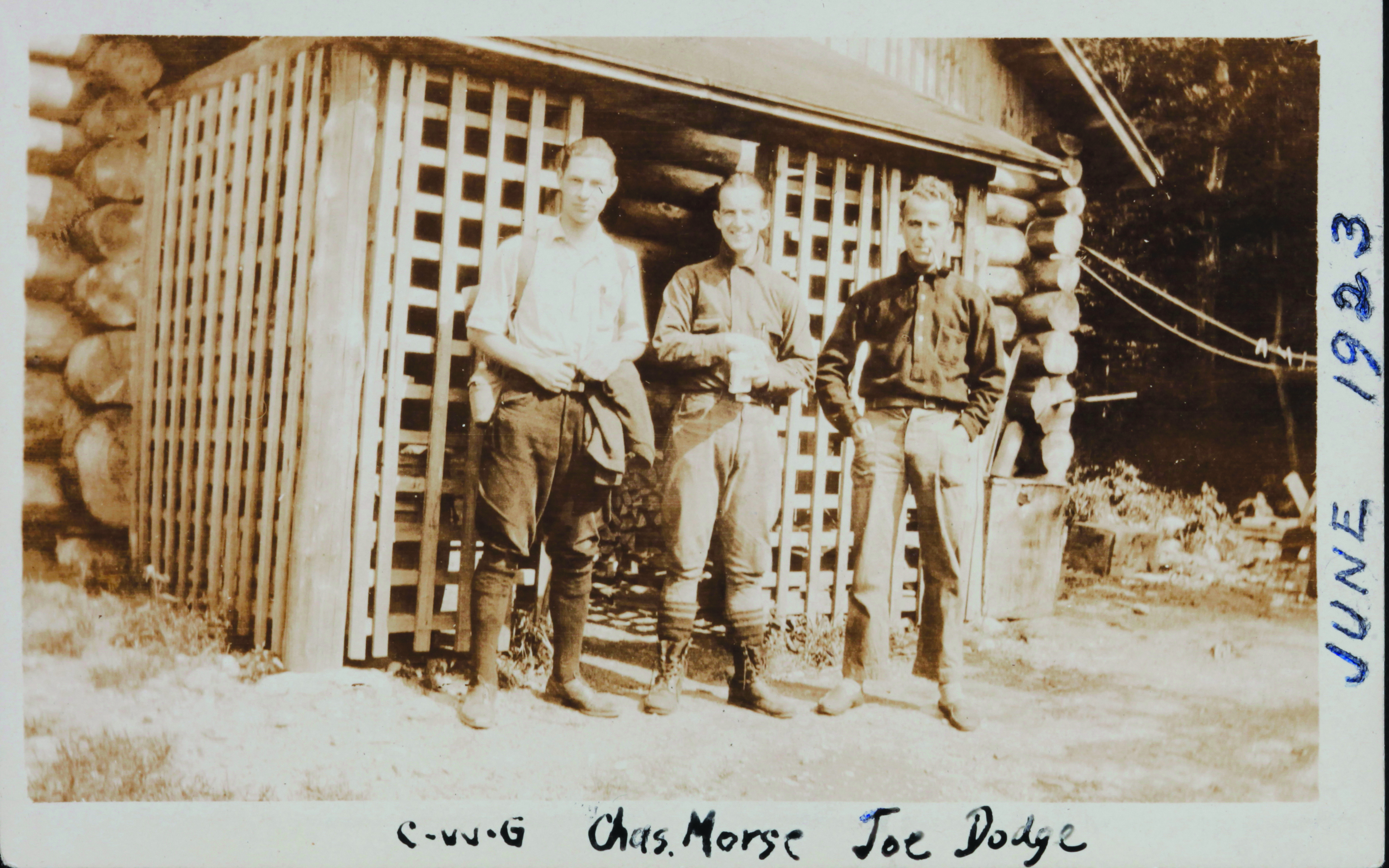 Joe Dodge (far left) came to AMC’s Pinkham Notch Camp in 1922 after serving in the U.S. Navy during World War I, and by 1926 he became the year-round manager of the property and its three high huts—Lakes of the Clouds, Madison Spring, and Carter Notch. Today, Dodge’s legacy runs throughout the eight high huts of the White Mountains, three of which he helped build and the other five renovate. He was also a founding member of the Mount Washington Observatory in 1932.

Dodge was a well-known skier in the region, as well as a search and rescue volunteer and lover of the outdoors, and is credited with assisting in more than 100 rescue operations during his tenure as huts manager.

Dodge died in 1973, but his contributions continue to be honored through his namesake lodge and in the Joe Dodge Award, given annually to a member of the AMC community (staff or volunteer) who exemplifies Dodge’s spirit of service and mountain hospitality. 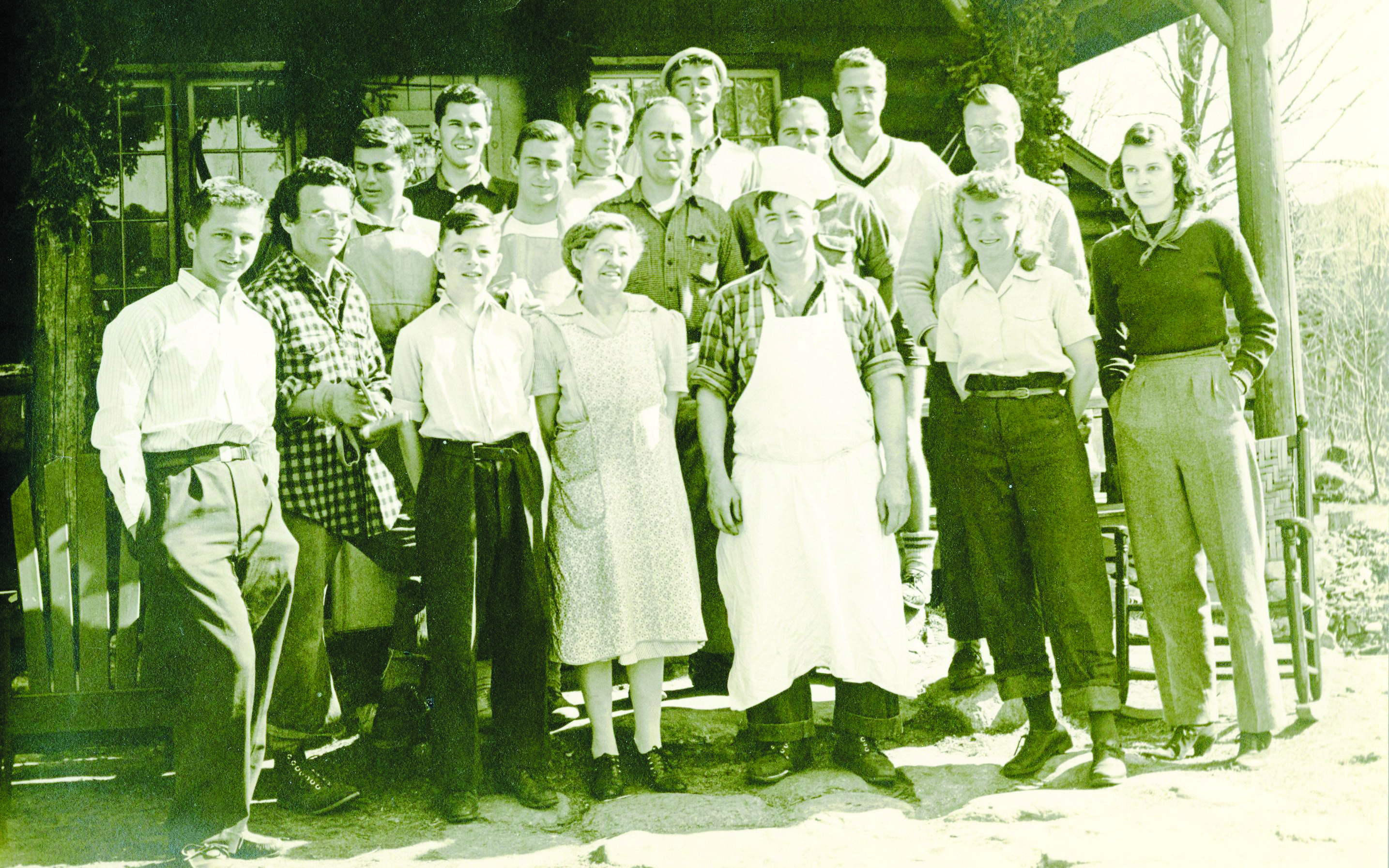 Courtesy of AMC ArchivesBy 1942, most men in the United States were off to war in Europe and Asia, short-staffing industries back home. Huts manager Joe Dodge turned to women to fill positions at Pinkham. 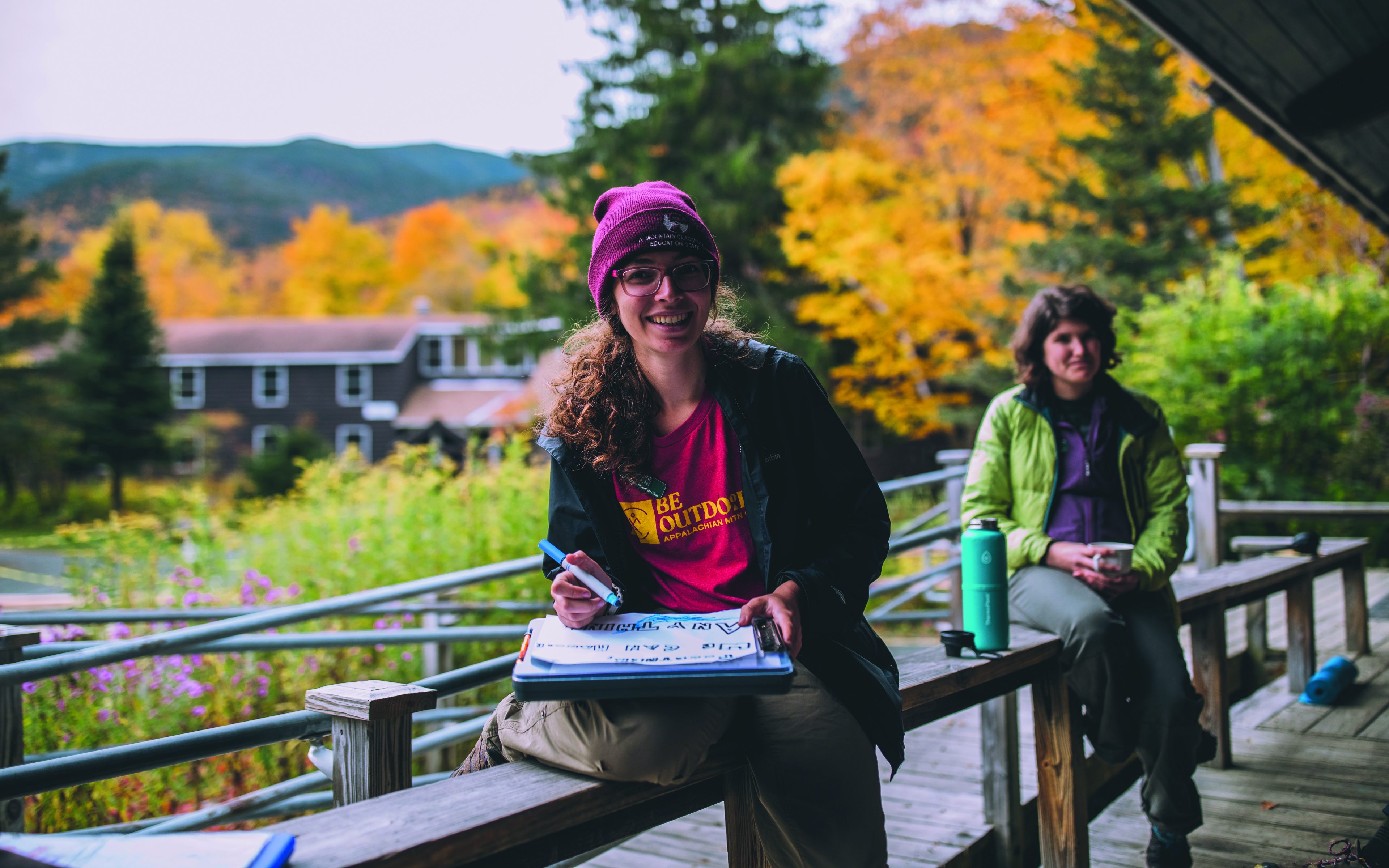 Paula ChampagneAMC continues to provide opportunities to introduce younger generations to the outdoors and foster a love of the environment at an early age. Here, a participant in AMC’s A Mountain Classroom rests outside Joe Dodge Lodge before a hike to nearby Crystal Cascade.