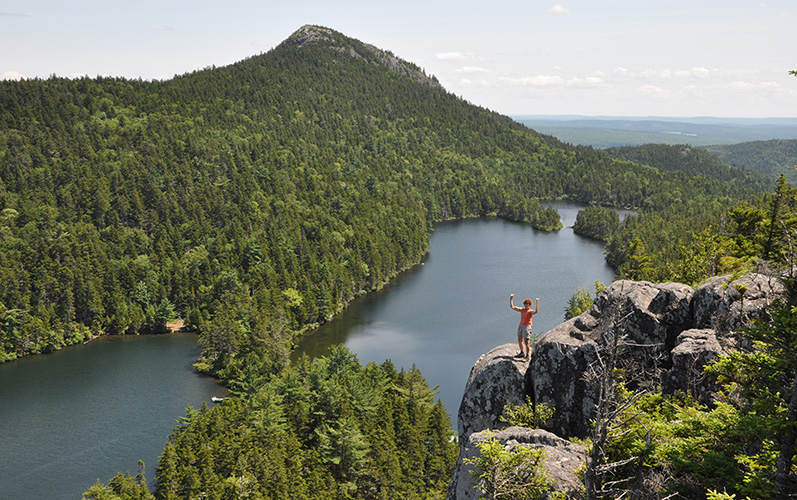 Afoot and afloat in Maine’s most beguiling backcountry

My introduction to Maine’s famed 100-Mile Wilderness region came in early July of 1974, when a junior high school friend and I concocted a plan to hike the Appalachian Trail from Monson to Katahdin. We would cover the 100 trail miles of the name, plus the final 15-mile stretch of the AT within Baxter State Park. But the adventure proved a little too ambitious for a couple of green 15-year-olds with gargantuan packs. After four days and just 25 miles of sweat and toil, black-fly bites, and perhaps a twinge of homesickness, we retreated down Third Mountain in a thunderstorm after dark. We holed up for the night in a cabin at Chairback Mountain Camps on Long Pond (now site of AMC’s lodge). The next day we made our way out to civilization in the cab of a logging truck, its burly driver gently chiding us for our apparent foolishness.

I returned to the 100-Mile Wilderness (100MW) in October 1977, this time at the tail end of a 2,100-mile thru-hike of the Appalachian Trail. More mature, and physically strong and woods-savvy from five months of continuous hiking, I completed my long trek and the unfinished business of three years prior. For a solid week I reveled in the beauty of the 100MW: the brilliant fall colors, the mountaintop views, the pristine lakes and ponds, the fragrant spruce-fir forest, the loons and moose, and the solitude and serenity of this big chunk of wild country. I was irrevocably hooked on this special region of Maine’s North Woods, and over the years I would return many times to hike, camp, and fish.

Through the 1970s and into the ’80s, the 100MW region was primarily a working forest, as it had been for more than 150 years. Immense tracts of land were owned by a handful of big industrial owners and by a number of family estates—overseen by professional forest management firms—for the purpose of growing and harvesting pulpwood and sawlogs. The region also hosted traditional sporting camps and private hunting and fishing camps. Public access was via logging roads, mostly free and unrestricted. Conservation lands were minimal, however, with just the 1,600-acre Maine Audubon Society preserve on Borestone Mountain and the 35 acres encompassing the old-growth pines of The Hermitage Preserve near Gulf Hagas, the “Grand Canyon of Maine.”

Recreational opportunities were the traditional ones: fishing, hunting, and camping. One could also hike on the AT, of course, and that’s where I spent most of my time. I crossed the Barren-Chairback Range, explored Gulf Hagas, climbed the peaks of the Whitecap Range, and, one winter, skied roughly 40 miles from Bodfish Valley to Kokadjo via Baker Mountain. Where no trails existed I bushwhacked. To me this was the real Maine Woods, and each trip provided as much adventure as I could want. At the time, I didn’t care who owned the land or how it was managed. It was all gloriously good fun, and I figured these woods would always exist as they were then.

But that was not to be. Major changes in the paper industry precipitated the unraveling of the historically stable model of large land ownership, not only in the 100MW but throughout Maine’s North Woods. From the 1980s into the 2000s, at least 6 million acres of land changed ownership, some of it multiple times. But this period of upheaval and uncertainty also opened up new and unforeseen opportunities for both conservation and recreation.

In 2003, AMC established a presence in the heart of the 100MW with its purchase of the 37,000-acre Katahdin Iron Works Tract. This was the first step of the new Maine Woods Initiative, AMC’s strategy for land conservation in the region. The initiative addresses local economic and ecological needs through an array of tactics: outdoor recreation, resource protection, sustainable forestry, and community partnerships. In 2009, AMC purchased the adjacent 29,500-acre Roach Ponds Tract, a critical link that created a 63-mile-long corridor of conservation lands extending from the southern boundary of AMC’s KIW property to the northern end of Baxter State Park.

This 63-mile-long forest block also features the State of Maine-owned, 43,000-acre Nahmakanta Public Reserved Land, secured in 1990; the 46,000-acre Debsconeag Lakes Wilderness Area, acquired by The Nature Conservancy (TNC) in 2002; 15,000 acres of AT corridor procured by the National Park Service between 1985 and 2004; and more than 40,000 acres owned by the conservation nonprofit Elliotsville Plantation, Inc. Abutting these lands are portions of the 210,000-acre Katahdin Forest Easement, acquired by TNC in 2004, and the 363,000-acre Moosehead Region Conservation Easement, obtained in 2009 by TNC in partnership with AMC and the Forest Society of Maine (which closed in 2012). Thus, in a little more than 20 years, the 100MW has gone from a few thousand acres of conserved forestlands to approximately 330,000 acres.

In recent years, hunting and fishing have been on the decline in Maine, while hiking, wildlife and bird watching, photography, and mountain biking have been growing in popularity. The conservation work of AMC and others in the 100MW has spawned a wealth of new recreational opportunities for both day and overnight visitors. This is having a tangible impact on the economy of local communities.

As I write this, I’ve begun planning another trip into the 100MW, my first during summertime in quite a while. AMC’s Maine Mountain Guide and its 100MW map will be my close companions for this homecoming of sorts, as I look to reconnect with some old friends—those familiar trails and special places of my youth—while exploring some new and different paths. Now, as then, the possibilities seem almost limitless. Here are some of my favorite adventures:

1: Hike Lodge-to-Lodge  |  AMC Maine Woods Property
Enjoy a self-guided, multi-day hiking adventure through the valley of the West Branch of the Pleasant River via the Head of the Gulf, Rim, Appalachian, and Henderson Brook trails, about 9 miles total. En route, pass through Gulf Hagas and savor its spectacular waterfalls. Bookend the trek at AMC’s Little Lyford and Gorman Chairback lodges. Each location has private log cabins complete with gas lights, wood stove, and (at Gorman) bedding. The main lodges feature home-cooked meals, hot showers, and wood-fired saunas. Another option is to base out of one lodge and take day hikes. At Little Lyford, explore the trails around the nearby ponds, hike Laurie’s Ledge Trail to the summit of Indian Mountain, or walk the rehabilitated fishing trails to Pearl, Horseshoe, and Grassy ponds, each home to a healthy brook trout fishery. From Gorman Chairback, make the climb to Monument Cliff on Third Mountain for far-reaching wilderness views. For solitude seekers, a dozen primitive campsites scattered throughout the backcountry are accessible by foot or canoe.
Info: Maine Mountain Guide, 10th ed. (AMC Books)

2: Hike the Debsconeag Backcountry Trail  |  Nahmakanta Public Reserved Land
This 12-mile figure-eight loop passes through an 11,000-acre ecological reserve in the northeast corner of the property. The trip can be done as a long day hike or an overnight backpack. From the trailhead at Fourth Debsconeag Lake, the trail weaves through the woods and along low ridges past Stink Pond and Fifth, Sixth, Seventh, and Eighth Debsconeag ponds, all good spots to see moose. A 2-mile stretch along the shore of pristine Nahmakanta Lake yields fine views of Nesuntabunt Mountain. Other hiking options nearby include the 9-mile Turtle Ridge Loop and the Tumbledown Dick Trail, which has two backcountry tentsites along its 5-mile route. From the hand-carry boat launch at the south end of Nahmakanta Lake, paddle to one of several remote beach campsites. Or pitch a tent at one of 14 road-side sites, each with a picnic table, fire ring, and privy.
Info: Maine Mountain Guide, 10th ed. (AMC Books); Debsconeag Backcountry Trail

3: Paddle the Debsconeag Lake  |  Debsconeag Lakes Wilderness Area
Put a canoe or kayak in at Omaha Beach on the Debsconeag Deadwater, located on the West Branch of the Penobscot River, and paddle into the Debsconeag chain of lakes. (Pronounced DEBS-coh-negg, the name means “carrying place,” a reference to the spots where American Indians portaged their birch-bark canoes around waterfalls and rapids.) The entire Debsconeag Lakes Wilderness Area (DLWA) has been designated an ecological reserve. It features the highest concentration of remote ponds in Maine as well as extensive stands of old-growth forest. Primitive campsites are found on First, Second, and Third Debsconeag lakes, which are linked by portage trails. On the north shore of First Debsconeag Lake, take the short foot trail to the Ice Caves, a deep hole beneath huge boulders, for a cool diversion. Wet a fishing line for brook and lake trout and Arctic char. Hand-carry boat launches at Hurd Pond and Little Holbrook Pond allow further exploration by water. The AT threads a winding 15-mile path through the DLWA, including 3 miles along Rainbow Lake, the largest in the DLWA. The Blue and Horserace Pond trails leave from a common trailhead on the Golden Road (the renowned logging road from Millinocket to Canada); the former leads to campsites on Horserace Pond, while the latter reaches Rainbow Lake. No fewer than 27 primitive backcountry campsites are accessible either on foot or by boat.
Info: Debsconeag Lakes Wilderness Area

4: Hike the Base and Summit Trails  |  Borestone Mountain Sanctuary
Climb the twin-peaked crag of Borestone Mountain for grand panoramic vistas ranging from the Bigelows to Moosehead Lake to Katahdin. The Base Trail rises steadily to Sunrise Pond and to the visitor center and its interesting exhibits of the property’s natural and human history. Operated as a fox farm by the Moore family until 1958, the sanctuary today is owned by Maine Audubon. Tackle the steep upper slopes of the mountain via the Summit Trail, topping out on the bare rocks of the east peak, where a map display with a horizon profile identifies the surrounding terrain features. About four miles round-trip.
Info: Maine Mountain Guide, 10th ed. (AMC Books); Borestone Mountain Audubon Sanctuary

LEARN MORE: WHAT IS THE 100-MILE WILDERNESS?

The 100-Mile Wilderness is the name given to the next-to-last section of the Appalachian Trail on its 2,180-mile route from Springer Mountain, Georgia, to Katahdin in Maine. This vast expanse of forests and mountains, lakes and ponds, and rivers and streams—about 750,000 acres in all—ranges from the village of Monson just south of Moosehead Lake to Abol Bridge on the West Branch of the Penobscot River, on the Golden Road at the doorstep of Baxter State Park. While not formally a wilderness area by any legal definition, the 100MW region is nonetheless very primitive and wild. The name is credited to Stephen Clark, editor of the Appalachian Trail Guide to Maine from 1964 to 1982, who created the colorful label to alert AT thru-hikers to the fact that no resupply points existed along this remote 100-mile stretch of trail, still largely the case today.

The website will be undergoing scheduled maintenance on Thursday, February 9 and may be inaccessible between 10:00am and 2:00pm ET. We apologize for any inconvenience.