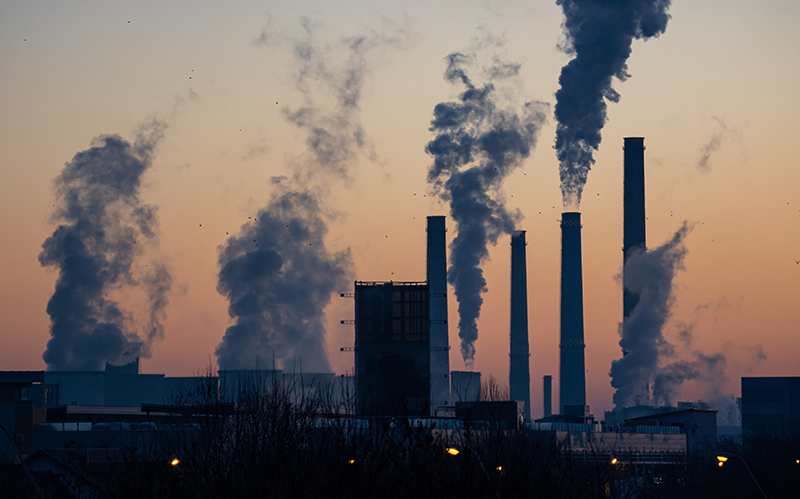 What leads a person to become skeptical of human-caused climate change? Often times, it’s inaccurate information being passed from person to person, sometimes over social media, and frequently originating with industries that have a financial stake in lobbying against climate actions, such as renewable energy. But despite scientific consensus that Earth’s climate is changing and humans are largely to blame, misinformation abounds with regard to the climate crisis. With gratitude to AMC director of research Dr. Sarah Nelson and the smart folks over at The Conversation, here are 5 common climate change myths, debunked. 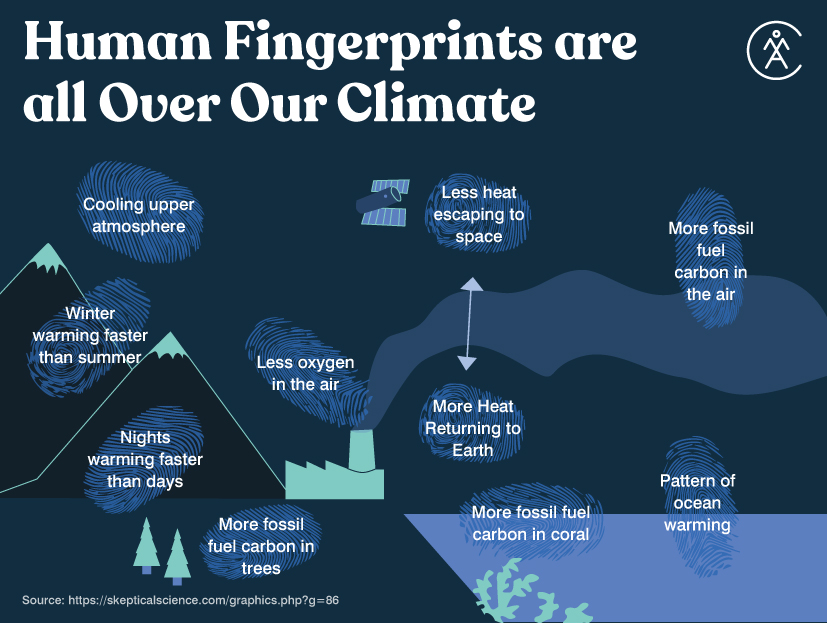 Myth 1. Human impact is too insignificant to have played a part in climate change, which is just part of the natural cycle.

It’s true, Earth’s climate has always changed. Longitudinal studies have shown that the last 150 years—going back to the start of the Industrial Revolution—is the only time period in two millennia that the climate has changed at the same time and in the same direction in every place on the planet. During this period, more than 98 percent of the surface of the planet has warmed. Modeling suggests future warming will be unprecedented compared to the previous 5,000,000 years.

As a refresher, the main contributors to climate change are greenhouse gases that trap heat in Earth’s atmosphere. The main gases that contribute to the greenhouse, trapping the sun’s heat and warming the global climate, are carbon dioxide (CO2), methane, nitrous oxide, fluorinated gases, and water vapor. These gases differ from each other in how long they stay in the atmosphere (from just a few years to millennia) and in how effective they are at storing heat. Some of these gases are naturally occurring, but human activities—especially burning fossil fuels and certain agricultural practices—are the main contributors to greenhouse gas emissions. Indeed, human fingerprints are all over climate change. 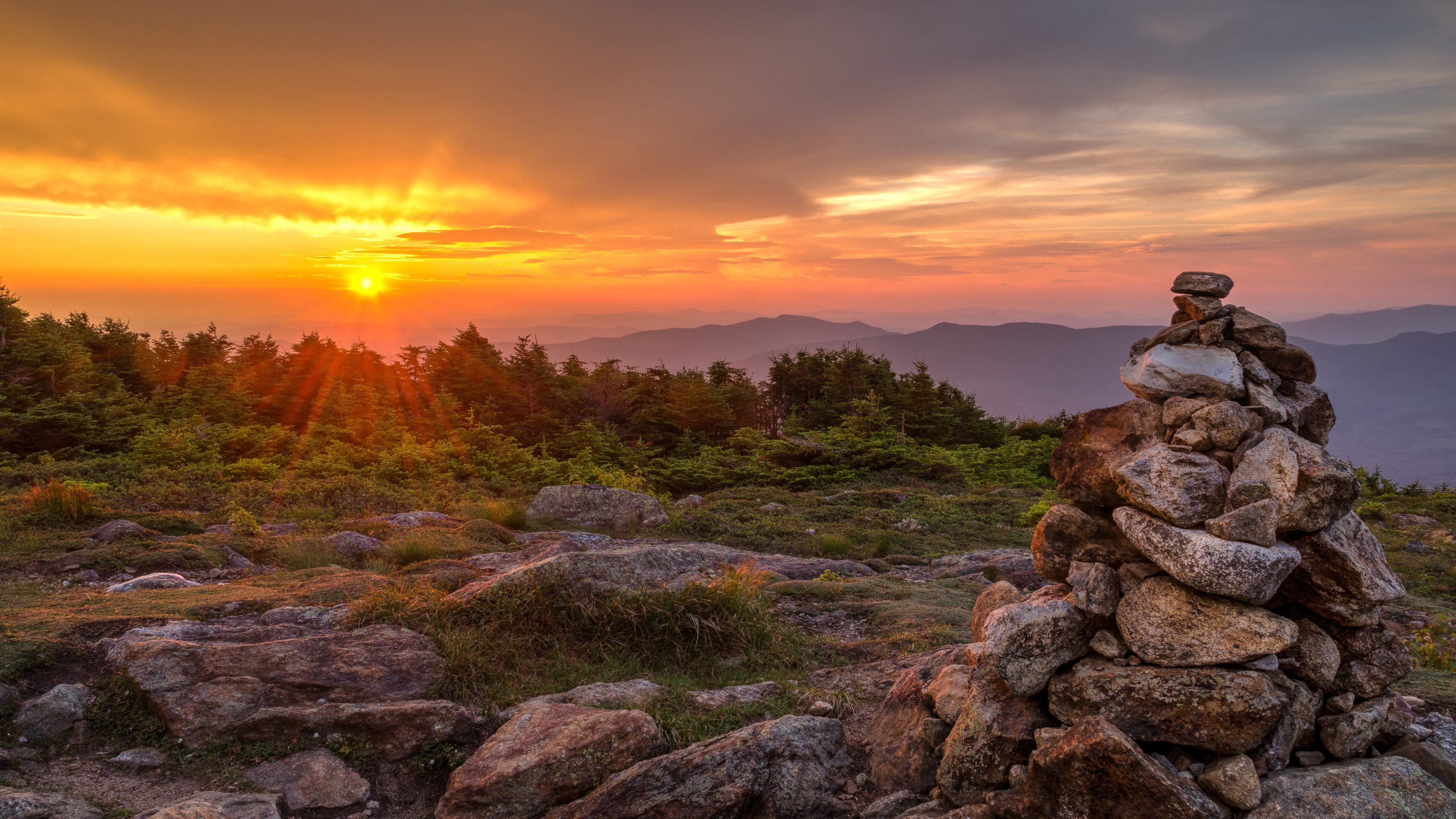 Myth 2. Changes are due to sunspots/galactic cosmic rays.

Sunspots, or storms on the sun’s surface that produce magnetic activity and can cause solar flares, do have the power to modify the climate on Earth. But scientists using sensors on satellites have been recording the amount of the sun’s energy hitting Earth since 1978 and have detected no upward trend. As such, sunspots cannot be the cause of the recent climate change.

Others suggest galactic cosmic rays (GCRs)—high-energy radiation that originates outside our solar system—may help to seed or “make” clouds, which cool the Earth. But scientific evidence shows that GCRs are not very effective at seeding clouds. More importantly, over the last 50 years, the number of GCRs reaching Earth have actually increased to record levels in recent years. If this myth were correct, GCRs should be cooling the Earth, which they aren’t. 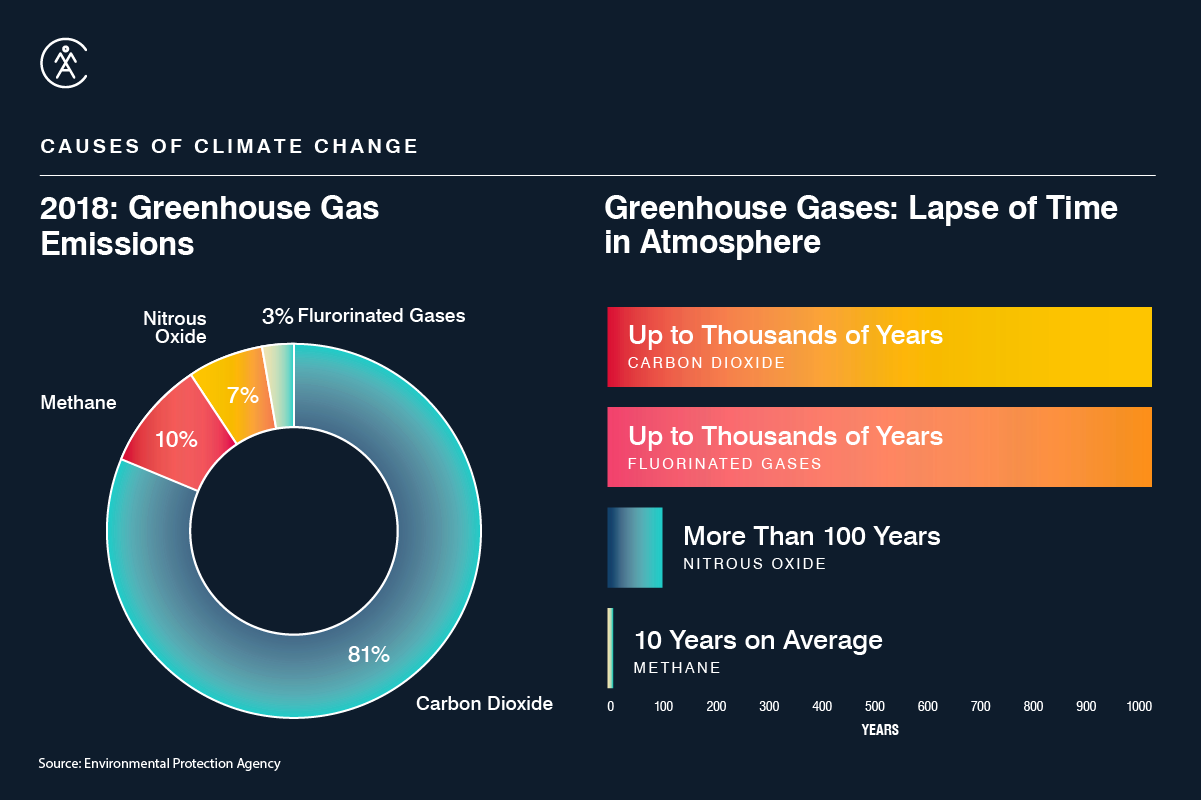 Katie MetzCarbon dioxide, or CO2, may comprise a small percentage of the earth’s atmosphere, but it makes up the majority of greenhouse gases present and can last thousands of years in the atmosphere.

Myth 3. CO₂ is a small part of the atmosphere; it can’t have a large heating effect.

This logic is faulty. A small amount of something can absolutely have a significant effect on something larger. Think about poisons like cyanide—a small amount can be fatal. Carbon dioxide accounted for 81 percent of greenhouse gases emitted in 2018, and that number is expected to rise steadily in the coming decades. Human activity is the leading contributor to excess CO2 in the atmosphere, specifically combustion of fossil fuels from transportation. And CO2 directly affects Earth’s temperature through the Greenhouse Effect—it acts like an insulating blanket trapping heat near the surface. Finally, CO2 is able to lapse in the atmosphere for thousands of years, meaning carbon we emit now will affect humans for generations to come. 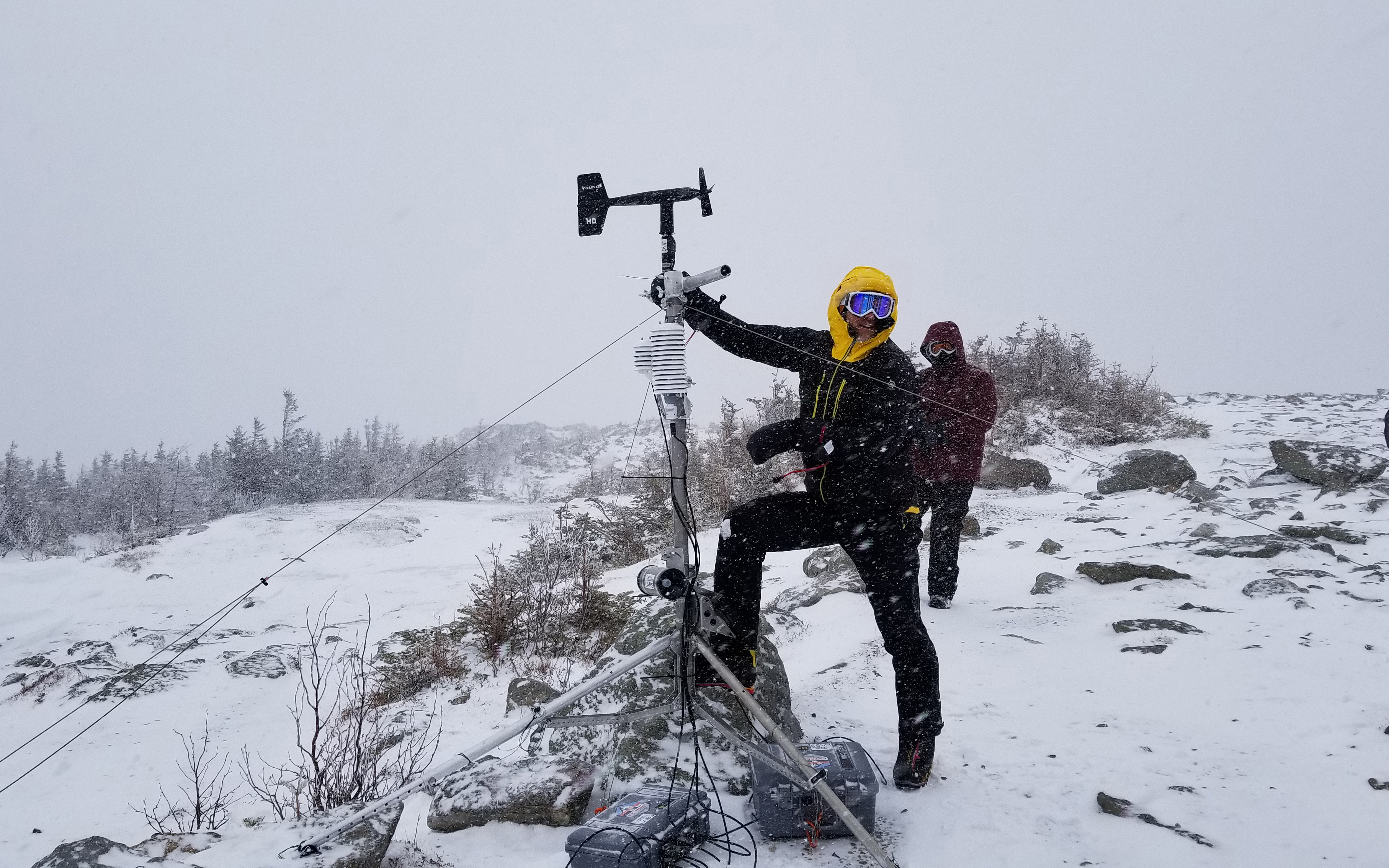 For this claim to be true, we would need to see a coordinated conspiracy among climate scientists in more than 100 nations around the globe. That’s simply impossible.

The truth is, scientists studying global climate trends have shown over and over again a warming trend in the last century and a half that surpasses any Earth has experienced in its history. Climate scientists work at different scales—from local to global, in different places, at different timescales, and in different ecosystems and earth system components. Evidence from many independent studies across institutions, time and spatial scales, and climate indicators point toward warming climate.

Scientists do correct for inconsistencies in the data when necessary—especially where data-gathering methods have improved. The method for how scientists collect ocean temperatures, for instance, standardized in 1941 to reduce the impact evaporation may have had on the data.

Myth 5. Climate models are unreliable and too sensitive to carbon dioxide.

Teams at more than 20 labs around the globe have developed and run a suite of different, independently-developed general circulation models, using millions of lines of code, and continually test these models for accuracy against paleoclimate data and standalone events like large volcanic eruptions. These are used to predict the future climate of our planet.

While no single model can claim absolute authority, the existence of dozens of independently constructed and calibrated models that are generally in agreement gives the scientific community confidence that human-caused global warming is in fact occurring. When scientists run many models using the measured climate data, this is called “ensemble modeling.” The results of ensemble models provide a range of predictions, but these many models agree on the major trends we are likely to see continue.

What do those models agree on? Earth’s average surface temperature has risen 1.62 degrees Fahrenheit since the late 19th century—100 percent of which was caused by humans. All but one of the 16 hottest years in NASA’s 134-year record have occurred since 2000. The Intergovernmental Panel on Climate Change (IPCC), which includes more than 1,300 scientists from the United States and other countries, forecasts a temperature rise of 2.5 to 10 degrees Fahrenheit over the next century. 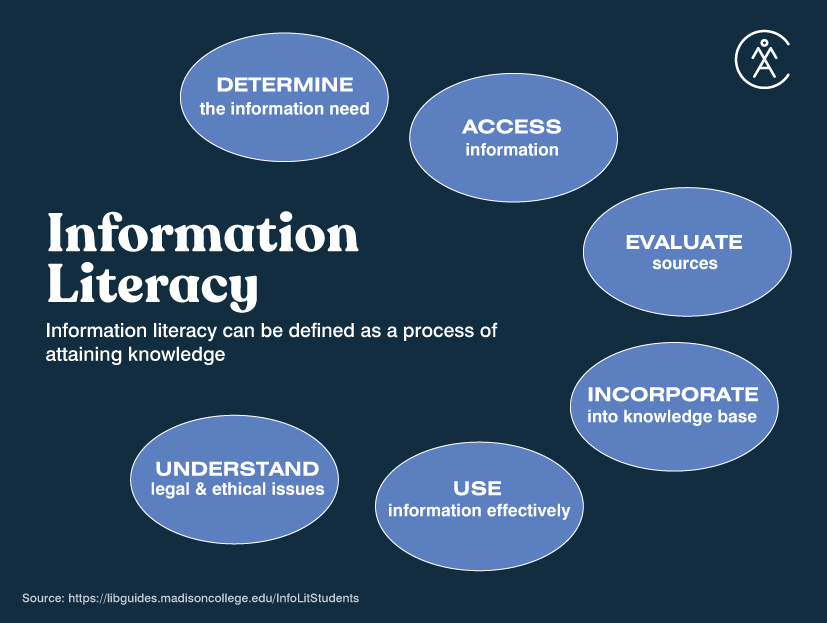 Katie MetzBecome a more informed researcher when it comes to climate change.

Currency: When was it written? With climate science in particular, the more recent, the better.

Relevance: Does this source address my topic? Relevance also applies to a source’s intended audience.

Authority: Who wrote and published the article? You should be able to see the name, credentials, affiliations, and contact information of the author.

Accuracy: Where does this information come from? Be sure the claims a source makes are supported by evidence, and in the case of a climate change source, science. Article citations are a good place to discern a source’s accuracy.

Purpose: Why was this article written? Remember, bias exists, and publishers and authors may only publish one side of an argument.

Sadly, many articles cited by climate skeptics simply do not pass the C.R.A.A.P. test, and yet they are forwarded from friend to friend and shared on social media every day. (Pro tip: Be especially careful with information and memes shared on social media.) As discerning readers, you can help stop the spread of false or misleading information about climate change. The stakes could not be higher.