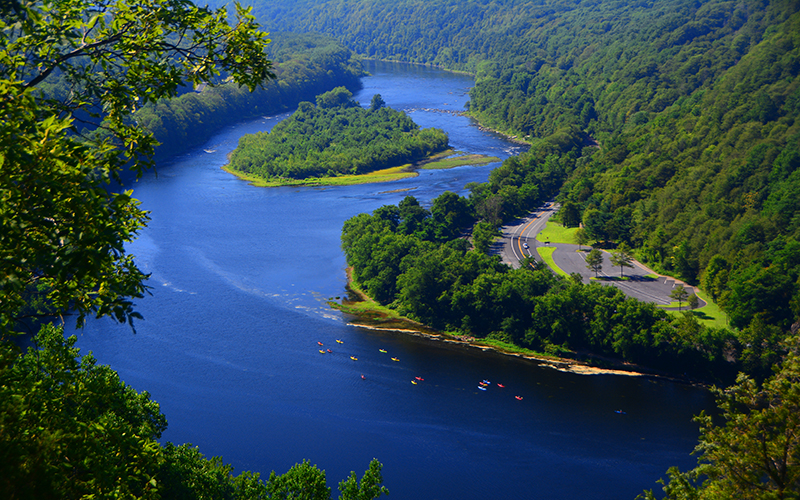 Every day, the average American family uses 300 gallons of drinking water, for consumption, bathing, cooking, laundry, and other household chores, according to the Environmental Protection Agency (EPA). Where that water originates and how it is cleaned are questions we rarely consider, though, and we forget that much of the process starts at the source—which benefits humans who drink it and plants and animals that call those water sources home.

Where Does Our Water Come From?

The U. S. Geological Survey (USGS) estimates that 7 percent of the United States is water, covering approximately 264,837 square miles. This includes roughly 3,500,000 miles of rivers and 111,119 lakes and reservoirs. Most drinking water comes from either surface water or ground water. Surface water includes bodies of water that sit at the top of the Earth’s surface, such as rivers, lakes, streams, and reservoirs. Ground water is found underground and usually accessed by a well or spring.

Since its passage in 1974, the Safe Drinking Water Act has tasked the EPA with creating and enforcing the standards that keep the water we drink clean. States regulate those federal standards at the local level, pumping water from the rivers, streams, lakes, and ponds nearby to then treat for drinking. In total, the EPA estimates that there are currently 148,000 public water systems in the United States, serving 90 percent of the population. Ten percent of the U.S. relies on private ground wells for drinking water. 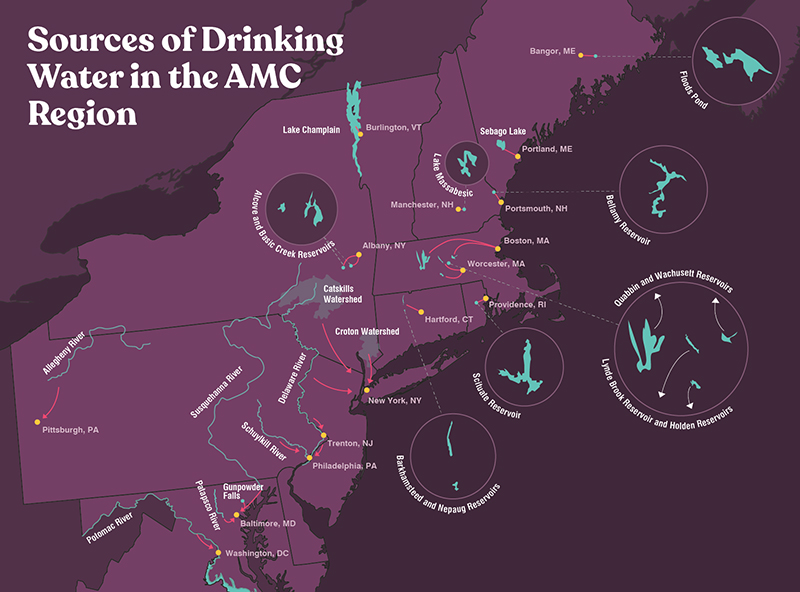 INFOGRAPHIC BY Katie MetzThis map shows where most major cities in the Northeast and Mid-Atlantic source their drinking water. For more information about where your town’s water comes from, along with water quality reports, visit your local city or town website.

From Source to Tap

Once the water is sourced from local watersheds, it then needs to go through a filtering process to assure that the water is safe to drink. Water treatment plants add chemicals to the water to bind dirt and other particles, creating large, loose clusters called floc, which sink to the bottom of the water. The water is then filtered through sand, charcoal, and gravel to remove any other impurities before the final disinfecting stage, where chemicals like chlorine or chloramine are added to kill off any remaining viruses, bacteria, or other germs. The water is now safe to drink. 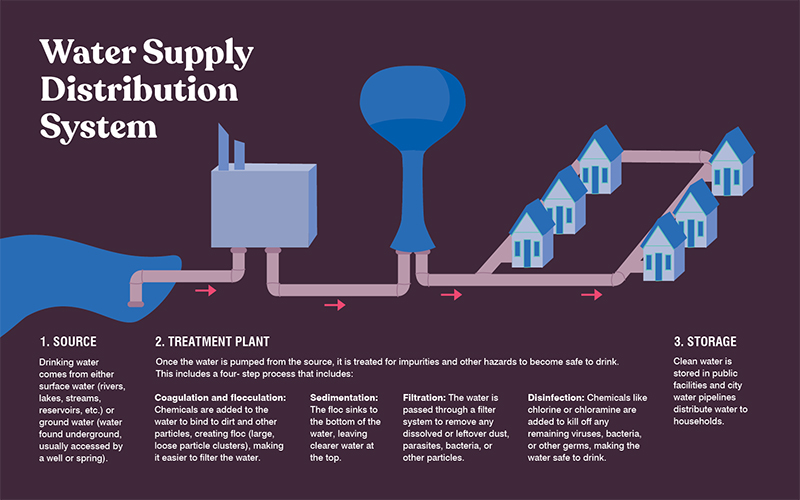 INFOGRAPHIC BY KATIE METZ Assuring safe drinking water requires a multi-step process of filtering and cleaning before it reaches your tap at home.

Occasionally, if a water source is kept clean enough to meet EPA standards, it can skip the filtration step of this process. Such is the case in Bangor, Maine, where the city water district owns an protects the 8.3-million-gallon capacity Floods Pond, allowing them to limit public recreation access and exceed EPA standards for drinking water.

“Floods Pond is one of eight surface water supplies in Maine considered clean enough by EPA standards to be exempt from filtration,” explains Dina Page, water quality manager at Bangor Water District. “By meeting the requirements of such a federal filtration waiver, we are able to skip all of the steps of filtration and move directly to disinfecting the water to make it safe.”

Some contaminants don’t come from the source, though, but instead infiltrate the drinking water supply after the water is cleaned. Such is the case with lead, a dangerous contaminant that is a common in the Northeast and has made headlines for years due to the drinking water crisis in Flint, Mich. The cause of lead contamination in water typically occurs when filtered water flows through older pipe systems, picking up the contaminant as the water reaches households. Many Northeast cities are now working to either remove the pipes or add phosphate to the water to prevent lead contamination.

While filtration helps keep drinking water clean and safe for consumption, it’s still important to protect the water at the source. Some concerns about local water supply are situational, such as the presence of beavers or muskrats, which may unknowingly carry diseases into water. But the biggest environmental concern, according to Sarah Nelson, AMC director of research, is human behavior.

Nelson says it’s important for residents and recreationists to help keep contaminants out of water supplies. At home, she recommends minimizing the use of fertilizer, which could cause the growth of harmful algae blooms. She also advises that residents dispose of hazardous waste properly to avoid contaminating the environment. And when heading outside, she encourages everyone practice Leave No Trace.

“One of the key things when recreating on a lake or river is to always keep in mind that you are in a watershed. Everything goes downhill and downstream, so it’s important to keep contaminants out of the water,” Nelson says.

Public water supplies are regularly tested for potential contaminants, like E.coli, lead, radon, bacteria, or other diseases, and must stand below a certain threshold to be deemed safe. This allows cities and towns to stay on top of keeping water sources clean. For private wells, it’s up to the well owner to test the water regularly and report to their local water department.

“It’s kind of a ‘you are what you eat’ situation,” Nelson says. “We have to minimize what we’re putting into environment. If there’s something you don’t want in your drinking water, don’t put it in there.”