How a Wild and Scenic Designation Will Protect Northeastern Rivers 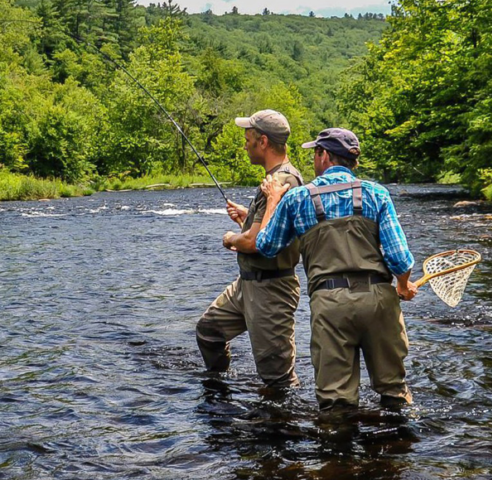 CASEY BREEDSFly fishers land a catch on Connecticut’s Farmington River, which is among a handful of rivers recently designated “wild and scenic.”

What might be the most successful river cleanup you’ve never heard of just received a big assist from Washington, D.C.

By the 1960s, the Nashua River—which runs between Worcester County, Mass., and Nashua, N.H.—had earned the distinction of being one of the most polluted in the country, awash with discharge from area paper mills. The Massachusetts activist Marion Stoddart led a citizen campaign to clean up the Nashua, lobbying for restrictions on what factories could dump in the river. Her herculean effort eventually led to the passage of the nation’s first anti-water-pollution bill: the 1965 Massachusetts Clean Water Act.

Now, more than half a century later, it’s clear how much these cleanup efforts have paid off. In March, the federal government designated 50 miles of the Nashua in Massachusetts “wild and scenic.” Doing so gives the section of river special legal protections: keeping its water supply free-flowing, clean, and plentiful; supporting a robust and diverse plant and animal ecosystem; preserving scenic vistas; and enhancing recreational access, such as paddling. The lower Farmington River in Connecticut is also a new designee.

The two river classifications went into effect in March when President Trump signed into law the bipartisan John D. Dingell Jr. Conservation, Management, and Recreation Act, an omnibus package of land bills that also permanently reauthorizes the Land and Water Conservation Fund and grants new federal protections to natural areas across the country.

Passage of the act, sponsored in the Senate by Lisa Murkowski (R-Alas.), came as something of a welcome surprise to the conservation community, which has not seen many wins for public lands during the current administration.

To be called wild and scenic, a section of river must possess at least one feature—whether that’s scenic, recreational, geologic, plant or animal, historic, or cultural—considered “unique, rare, or exemplary.” The Nashua River and its two tributaries included in the designation, the Squannacook and Nissitissit, are often described as pristine, providing extensive habitat for birds, fish, and other wildlife, as well as recreational opportunities for paddlers.

“It’s an incredible section of the river to paddle,” says Diane Carson, co-owner of Nashoba Paddler, an outfitter in West Groton, Mass. She remembers taking a crew of summer-camp kids out paddling 20 years ago and seeing a bald eagle—the first time she’d ever seen one on the Nashua—as well as a flock of cedar waxwings, a great blue heron, and an osprey.

“We see osprey, we see heron, we see turtles, muskrats, beavers,” says Faith Salter, AMC’s director of volunteer relations who also leads kayak and canoe trips for AMC’s Worcester Chapter. “One of the reasons I lead trips on the Nashua is to show that you don’t have to go somewhere far away to see something wild and beautiful.”

Before March, 13,439 miles of 226 different rivers across 41 states and Puerto Rico were designated as wild or scenic, or less than one-quarter of 1 percent of rivers in the country, according to the National Wild and Scenic River Systems. While rivers in the West are federally managed, the East Coast’s new wild and scenic stretches will be overseen by local stewardship councils.

For the newly formed Nashua River stewardship council, the first order of business may be boosting recreational use. According to Al Futterman, director of land at the Nashua River Watershed Association, the river is something of a best-kept secret. While there are about 30 put-ins, takeouts, and boat launches along the nearly 50-mile wild and scenic stretch, “almost always you can’t tell where there’s a put-in unless you happen to know about it—it’s local knowledge,” Futterman says.

Paddlers aren’t the only potential users. In Connecticut, the whitewater-friendly Farmington River also provides drinking water to nearby Hartford.

“People think of waterways—of their drinking water—as these pristine resources, and we do want them to be that way,” says Kristen Sykes, AMC’s director of conservation strategies. “But they don’t have to be these far-off destinations we don’t have a connection to.”

AMC Outdoors, the magazine of the Appalachian Mountain Club, inspires readers to get outside and get engaged.

Trail Keepers: AMC’s Commitment to Resilient Footpaths in the Northeast and Mid-Atlantic