How AMC is Fighting Climate Change Through Carbon Credits 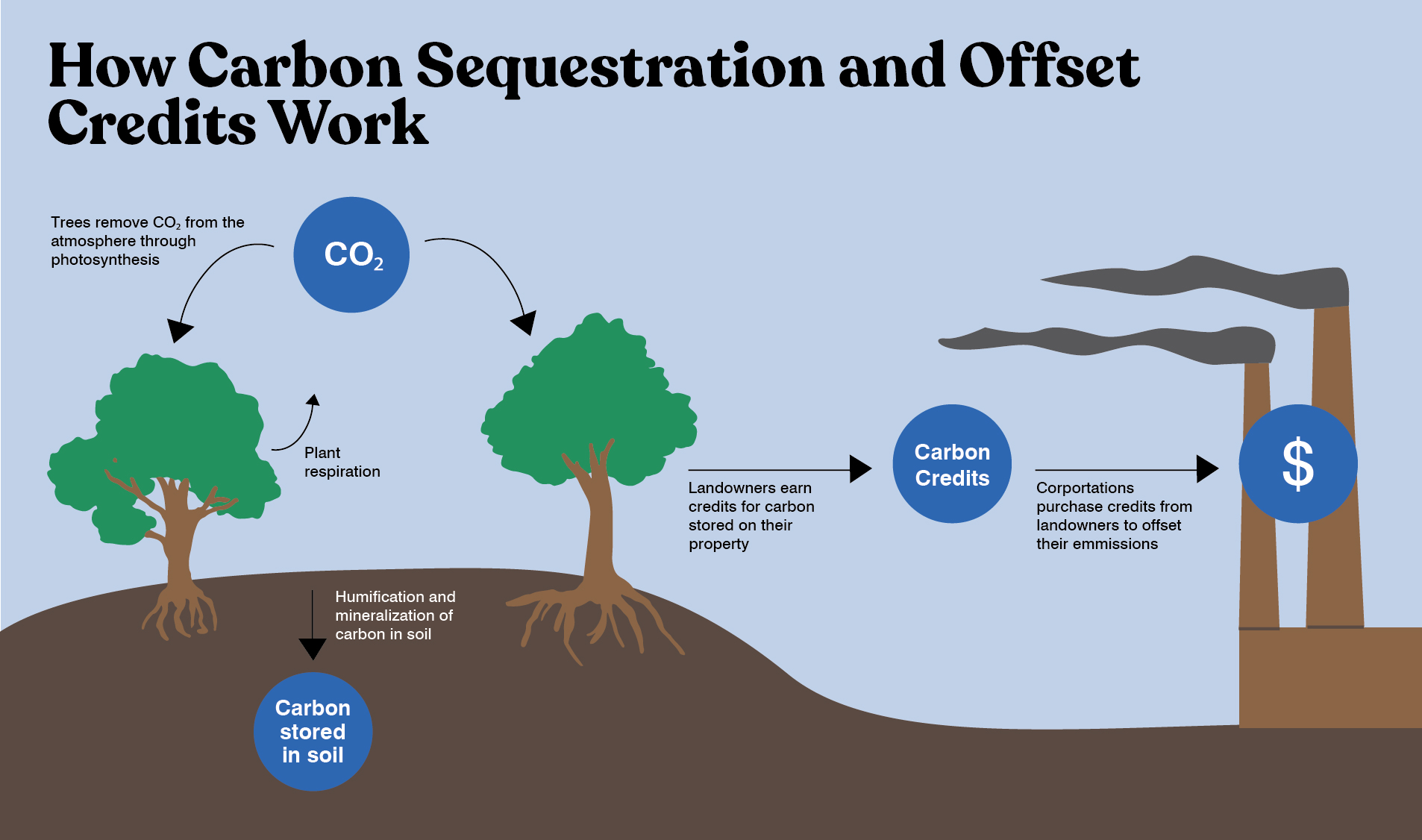 AMC’s Maine Woods Initiative now encompasses nearly 75,000 acres of forest land in the 100-Mile Wilderness region. While timber harvesting on a portion of these lands provides the major source of revenue to defray the costs of land ownership, AMC has also invested in an additional source of income to support land conservation—forest carbon offset credits.

Dave Publicover, AMC’s senior staff scientist, led the research to establish AMC’s first carbon offset project in 2014, seeing the potential to earn back money while continuing what AMC was already doing—practicing a sustainable forestry model that would help conserve resources in the Maine Woods, and help to offset future effects of climate change. To date, AMC has earned more than $1.2 million in revenue from just its 10,000-acre Katahdin Iron Works Ecological Reserve project, and is continuing to establish more projects in Maine, as well as consult other  landowners on how to effectively set up their own projects.

How Do Carbon Offsets Work?

A carbon offset helps balance the greenhouse gas emissions from one party to another, with a financial reward for the landowner storing the carbon. Forest carbon sequestration, or the long-term storage of carbon as a way to mitigate the effects of climate change, is just one of many types of carbon offset projects, and measures carbon based on how much is stored in living and dead trees on a designated property.

To earn carbon offset credits this way, first an interested landowner inventories how much carbon is stored on their property, for example a forest reserve like AMC’s Katahdin Iron Works Ecological Reserve. This number is compared to a regional average, measured by the registry, like the Climate Action Reserve (CAR), and if the property’s carbon storage is higher than that average, the landowner receives a credit. Each credit is equivalent to one metric tonne of carbon dioxide equivalent (mT CO2e), and is sold then retired to interested

Landowners can continue to earn credits as carbon stocking increases over time through the growth of the forest. For projects on lands with timber harvesting, like some of AMC’s Maine Woods properties, credit is also given for long-term carbon storage in harvested wood products.

A third party auditor provides all calculations and documentation recorded with the registry, as well as tracks ownership of the credits. Once this is done the credits are available to sell to those seeking to offset their emissions. “Most major corporations have carbon footprint reduction goals and are actual or potential buyers of offsets—Microsoft, Walmart, Amazon, energy companies, whatever,” adds Publicover. Credits retire after they’re purchased to ensure that each credit offsets only one metric tonne of actual emissions.

In return for the benefits of developing a project, the landowner makes a long-term commitment (100 years in the case of CAR) to maintain the credited level of carbon stocking in their forest, says Publicover. The project must be re-inventoried at least every 12 years and reverified every six years. AMC has set aside a portion of the proceeds from its credit sales as a stewardship fund to cover the cost of these future obligations.

AMC management of the Katahdin Iron Works land was a big change from the prior industrial landowners. About half of the property was set aside as an ecological reserve and other no-harvest areas, storing carbon in the maturing forests, but AMC also planned a conservative approach to timber harvesting elsewhere on the property. An early estimate by Publicover stated, “it appears that annual sequestration of carbon on the Katahdin Iron Works property may be nine to 12 times the annual carbon footprint of AMC’s operations, or four to five times if both operations and visitor travel is included.”

While carbon offset markets were emerging as a viable opportunity for landowners to “monetize” carbon sequestration in forests, it wasn’t until 2009 that the California-based Climate Action Reserve (CAR) opened their forest carbon protocol to projects outside of the state. Engagement in a program like this seemed like an excellent opportunity for AMC, Publicover says. “It’s another source of revenue to support our land ownership, especially for the reserves which otherwise are subsidized by timber harvesting,” he says. “It’s also compatible with our approach to land management. When we realized we’re already doing it and could monetize our carbon storage, we saw no reason not to do it.”

When the Katahdin Iron Works Ecological Reserve was completed in 2014, it was the second such project in the northeastern United States. AMC would later establish a project on the 4,300-acre Silver Lake Ecological Reserve, completed in 2018. (It was initiated by the Forest Society of Maine prior to AMC’s acquisition of the property in 2016.) This added another $900,000 to the $1.2 million AMC has earned through carbon credit sales. 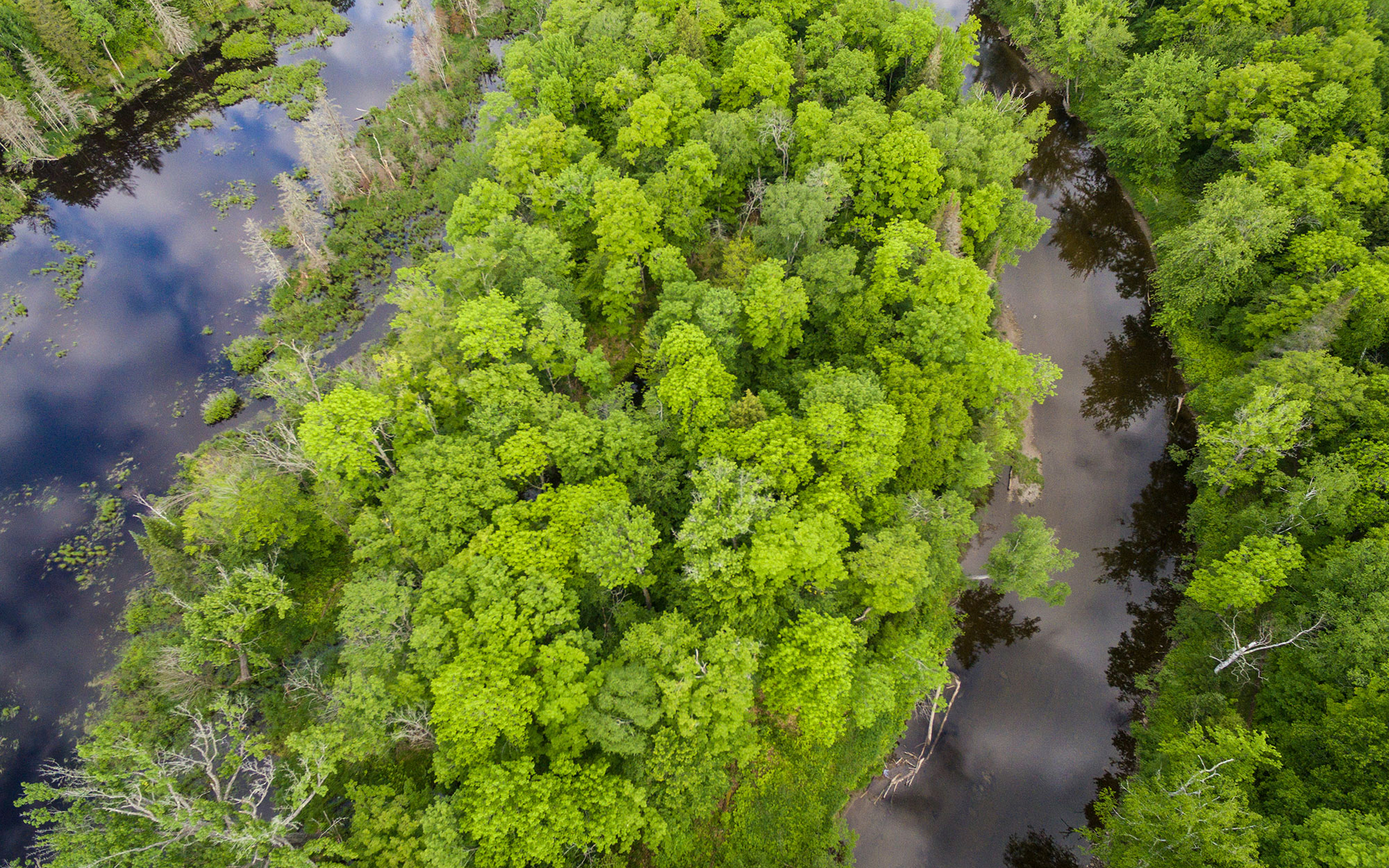 AMC’s average operational footprint, calculated between 2003 and 2014, is about 1,400 mT CO2e per year—about the same as driving 3,473,945 miles in your car—although Publicover says that it is likely higher now. “We’ve gotten more efficient, but we’ve also grown,” he said. “AMC now has more facilities, offices, and staff. Establishing a more comprehensive and sustainable system for tracking AMC’s emissions is a major near-term priority.”

The first carbon footprint assessment helped AMC identify ways to reduce its carbon emissions. Examples of some ways AMC has already made progress over the last two decades include installing solar panels at Cardigan Lodge, the Highland Center, and AMC’s three Maine Lodges; making energy efficiency upgrades to buildings and the vehicle fleet; reducing staff travel through the use of teleconferencing; and providing hiker shuttles in the White Mountains. Other improvements to AMC’s environmental sustainability include installing composting toilets at many facilities and reducing food waste.

Publicover says there’s more AMC can do, though, and the organization recently adopted an updated goal to reach net zero in carbon emissions by 2050, in line with the most recent recommendation of the Intergovernmental Panel on Climate Change. AMC’s Research Department is now in the midst of its search for the second Kenneth Kimball Research Fellow, who over the next two years will be focusing on mapping out the path to net zero.

AMC’s forest carbon projects already generate more than enough credits to offset its entire carbon footprint, says Publicover. “We could meet our net zero goal right now if we retired our own credits rather than selling them,” he explains. “However, that is not a proper use of offsets, and they aren’t intended to let emitters just buy their way out of real emissions reductions.”

How AMC credibly uses its offsets toward the net zero goal will be a subject of on-going discussion, he adds. One possibility is helping guests reduce their emissions from traveling to and from AMC facilities.

“We [AMC] encourage people to drive long distances to remote locations for fun, and in that sense we are part of the problem. We need to take ownership of that,” said Publicover. “The earlier carbon footprint spreadsheet included a rough estimate for guests traveling just to our White Mountain facilities. It was over 2,000 metric tons of CO2 per year—more than our operational footprint.”

AMC can help reduce this part of the organization’s emissions by offering carbon offset credits to guests when they book a stay at one of AMC’s huts or lodges. Publicover is currently working on how this program would work; though the start of the project has been delayed by the current focus on our COVID-19 response, he hopes it will be available sometime 2021. Of course, “Offsets are not an excuse to avoid real reductions,” Publicover says, and AMC encourages all guests to carpool when they can to help reduce emissions in small ways.

Building on the work of former Kimball Research Fellow Karin Bothwell, AMC continues to investigate other potential carbon offset projects on its lands. On the 38,000 acres of forest available for sustainable timber harvesting in the Maine Woods, Publicover estimates we are removing only half of the carbon that is sequestered each year. Bothwell’s assessment indicated that a project on these lands could be financially viable, and AMC is now in the final stages of getting one started as early as this summer. And once this project is launched, Publicover says AMC plans to look into a fourth project on the to-be-acquired Pleasant River Headwaters Forest in partnership with the current owner, The Conservation Fund.

Because of AMC’s extensive involvement in forest carbon markets, it is regularly sought out by others looking to launch their own projects. “I have been contacted by six to eight land trusts in the region who are considering their own project and want to learn from our experience,” Publicover says. “The knowledge we have gained has been a really important side benefit. We have learned a lot about how to do these projects, and our ability to share our experience with others is an important part of our mission.”