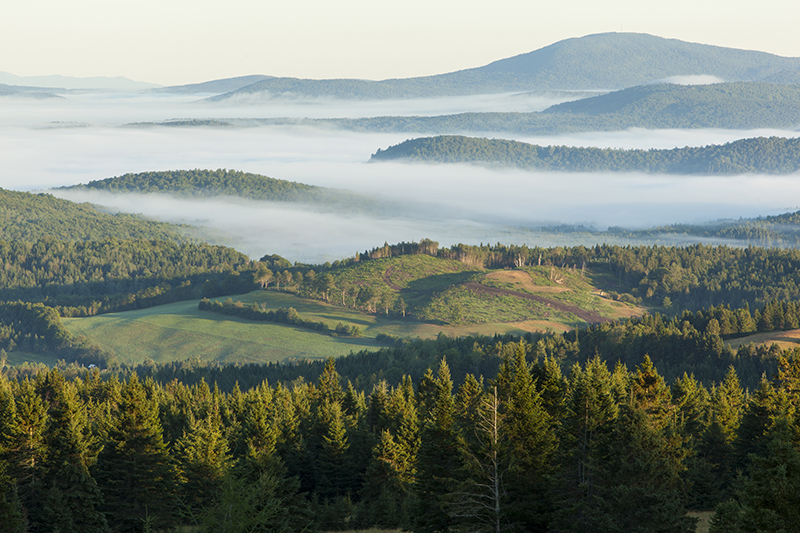 Northern Pass, which would have cut through this valley in Stewartstown, N.H., generated opposition across the state.

Update: The New Hampshire Site Evaluation Committee unanimously voted on May 24, 2018, to uphold its February decision, choosing not to reconsider the Northern Pass proposal. Northern Pass’s parent company, Eversource, is deliberating whether to appeal to the state supreme court.

After more than eight years of research, public hearings, expert testimony, and debate, one of the biggest environmental battles in New Hampshire history may have ended. The Northern Pass transmission line, which would have carried hydroelectric power from Quebec across New Hampshire for distribution in southern New England, was unanimously rejected by New Hampshire’s Site Evaluation Committee on February 1. That decision leaves Northern Pass with few possible routes to obtaining the required New Hampshire permit.

“This is one of the top three environmental issues that catalyzed the state’s public in the past 60 years,” says Ken Kimball, AMC’s director of research, citing the Seabrook nuclear power plant and construction of I-93 through Franconia Notch as the other two projects that galvanized broad opposition from thousands of citizens.

As originally proposed in 2010, Northern Pass’s overhead transmission lines would have bisected 187 miles of New Hampshire, including a portion of the White Mountain National Forest (WMNF) and the Appalachian Trail, requiring construction of more than 1,500 towers—some more than 155 feet tall.

“A threat like this was literally cutting through the core of AMC’s focus of over 100 years,” says Susan Arnold, AMC’s vice president of conservation. Within months of Northern Pass announcing its plan, AMC took up a central role in opposing the project. Other intervenors—the term for parties who filed opposition to federal or state permit applications—included the Conservation Law Foundation and Society for the Protection of New Hampshire Forests, 22 of the 31 towns in the proposed path, and individual residents.

This was a long-term commitment: AMC first became involved in 2010, when the organization filed a motion to intervene in Northern Pass’ application to the U.S. Department of Energy (DOE). The results of AMC’s subsequent visual-impact study, published in September 2012, revealed repercussions affecting the WMNF, Franconia Notch and Pawtuckaway state parks, and the broader New Hampshire landscape. All of that work began to pay off in 2015, when Northern Pass revised its proposal by committing to bury 52 miles of transmission line around the WMNF.

The Site Evaluation Committee’s February 1 vote rejecting Northern Pass came after the group determined the project failed to meet the second of four criteria: proof that the transmission line would “not unduly interfere with the orderly development of the region.” That interference could mean impeding local development, lowering property values, or negatively impacting existing land uses, including tourism.

Meanwhile, in January, Massachusetts selected Northern Pass from among a pool of 46 bids solicited by the commonwealth to meet its renewable energy commitment. That choice—which angered both New Hampshire advocates and those who believe Quebec hydropower won’t result in atmospheric greenhouse gas reductions—was eventually retracted when Massachusetts shifted its focus to a competing project in late March. That project, New England Clean Power Connect, proposes to bring the same Quebec hydropower into the U.S. via a 145-mile transmission corridor in Maine. AMC and its partners are now analyzing that project, which could impact the Appalachian Trail and Kennebec River Gorge.

In April, Northern Pass filed a motion for a rehearing. As this magazine went to press, that hearing was set to take place on May 24. Once that process plays out, Northern Pass can either accept the Site Evaluation Committee’s final decision or appeal to the state’s supreme court.

It was a long road to get to this point, but Kimball and Arnold look at AMC’s contributions with pride. “We devoted a lot of time and resources to have the facts make a difference in the outcome,” Kimball says. “This kind of investment exemplifies AMC’s ability to tackle major issues that impact its mission and see them through.”