TOM GILL / CREATIVE COMMONS BY FLICKRBrood X cicadas could make this spring just a bit noisy for residents of the Midwest and Mid-Atlantic.

What were you doing 17 years ago?

For Brood X cicadas, 2004 was the last time the notoriously loud insects saw the light of day.

But this spring, the skies will be buzzing across the mid-Atlantic and Midwest as millions of cicadas in this brood emerge to mate.

Likely beginning sometime in May (though the timing can shift earlier or later depending on latitude) billions of cicada juveniles—called nymphs—will emerge from the Earth, shed their skins to become adults, and buzz and fly around while engaging in mating behaviors. After a few weeks, likely around the beginning of June, females will have laid their eggs on trees, the adult cicadas will die, the eggs will hatch, and the new nymphs will burrow underground to begin the cycle again.

Brood X, the X in the name representing the number 10, is one of 15 broods of periodical cicadas of the genus Magicicada in the U.S. that emerge every 13 or 17 years. Their range extends as far north as New York, as far south as Georgia, and as far west as the Mississippi River. That range means these cicadas will be seen in large numbers in East Coast cities, such as the Washington D.C.–Baltimore region.

“This is going to put billions of periodical cicadas in contact with tens of millions of human beings,” says Dr. Michael Raupp, professor emeritus of entomology at the University of Maryland. “And that intersection between cicada and human will create fear, fascination, and fun.”

Don’t worry: while their noises have been described by some as “a shrill rasping like a million angry rattlesnakes” or maracas as loud as “a passing diesel train,” cicadas are harmless to humans. 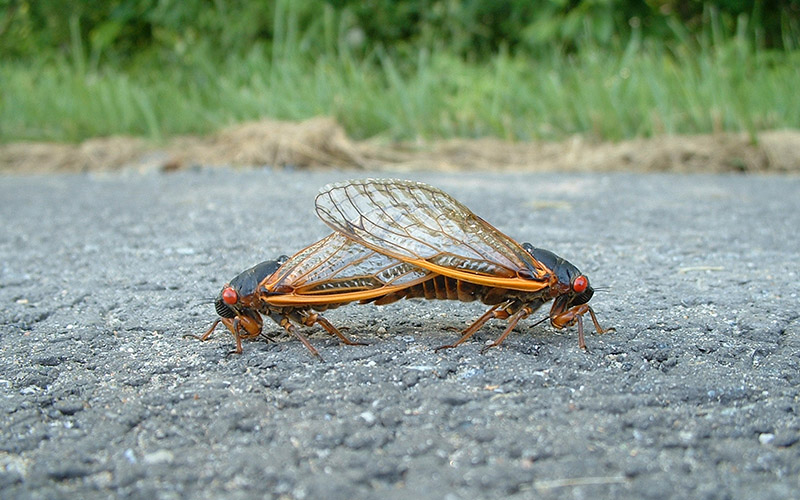 What are cicadas doing underground for so long? Essentially, just eating: they spend most of their 17 years sucking on trees’ xylem fluid, which carries water and nutrients. “It’s been a pretty dismal existence,” Raupp says of their time underground.

Scientists attribute this strange life cycle to an evolutionary strategy known as “predator satiation,” in which a species lives at high population densities for a period of time, providing sufficient prey for predators, yet allowing enough members of the species to survive to reproduce. Other species of plants, insects, and fish utilize this strategy, though cicadas are unique for how long their periodical life cycle is.

“The periodical life cycle is one of the strangest phenomena in all of natural history and biology,” Raupp says. “But, hey, it’s been working for these guys for hundreds of thousands of years.” 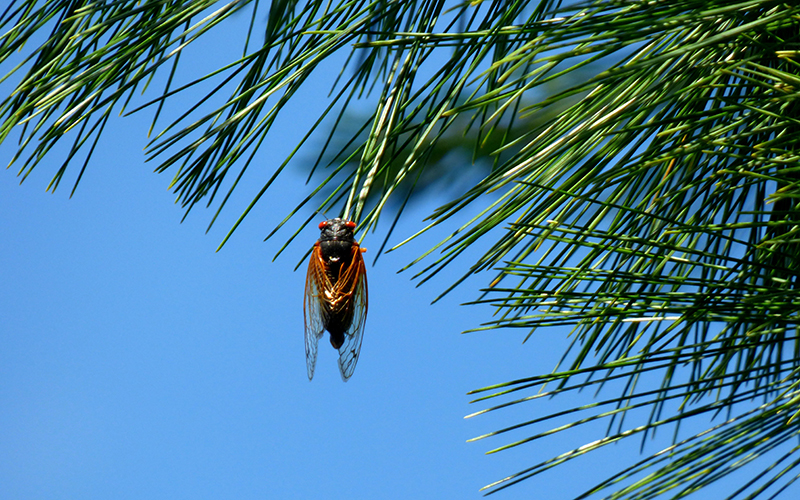 LAURA GILCHRIST / UNSPLASHDespite what some say, cicadas can damage tree health—especially younger trees. Wildlife and humans are not affected, however.

Effect on Trees and Wildlife

While some say the billions of cicadas emerging naturally prune trees and don’t threaten tree health, the insects can in fact cause damage to trees and forests.

“I don’t think any tree really wants to have an insect or anything else cutting slits into its branches to the extent that the terminals of those branches will often flag and, in some cases, break off,” Raupp says. “Flagging” refers to branches that wilt and sometimes die after female cicadas lay their eggs.

But research shows that cicadas won’t have any long-lasting impact on the survival and growth of well-established trees. Raupp recommends wrapping younger trees or saplings in a protective mesh of 3/8 of an inch or less rather than applying an insecticide, which may harm pollinators and other beneficial organisms. And if you live in Brood X’s region and you’re thinking of planting a tree this spring, Raupp recommends waiting until the fall.

Meanwhile, besides annoying a few humans with their humming noises for a few weeks, other wildlife will only benefit from the cicadas because they provide an ample food supply.

“It’s going to be a bounty for all the small mammals, for the birds, for humans—everything on the planet is going to want to eat a cicada,” Raupp says.

That’s right, cicadas are edible for human consumption. And Raupp, who once shared a cicada skewer with Jay Leno on “The Tonight Show,” says the insects taste pretty good. (One of his students even made a cicada cookbook.) “Connoisseurs of cuisine are going to find cicadas to be a delicacy,” he says. 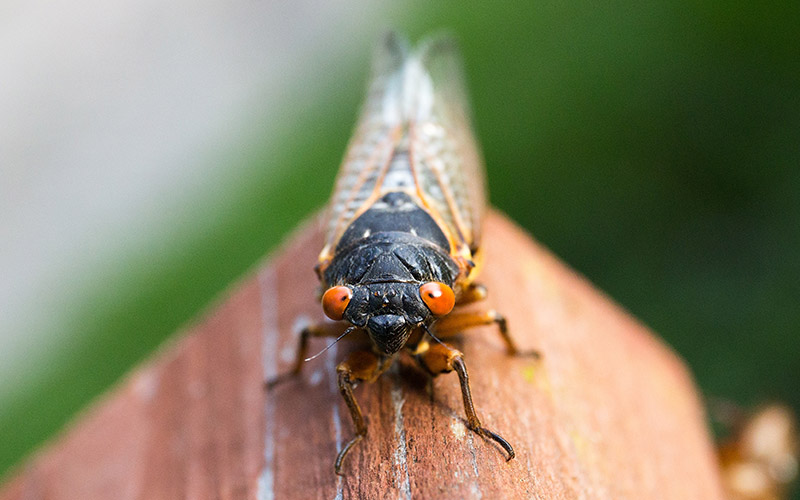 MICHAEL KROPIEWNICKI / PEXELSChanges in the climate may affect how long cicadas stay underground and where they emerge.

Because cicadas are so sensitive to climate, researchers at the University of Connecticut have been asking the question: will climate change impact cicadas’ unique behavior? According to Dr. Chris Simon, professor of ecology and evolutionary biology at UConn, one possible effect may be that cicadas on a 17-year cycle may eventually switch to a 13-year cycle as a result of changes in weather patterns.

For example, in 2017, Brood X cicadas were observed emerging four years early—13 years after they last emerged—including the greater Washington D.C., Baltimore, and Cincinnati areas. One midwestern brood has already made the transition. As climate change progresses, this trend is expected to continue, Simon says.

Scientists have also observed that climate change is shifting the geographical range of other insects. “As with most other creatures and plants, as it warms, I would not be surprised to see a range expansion of cicadas into more northern areas,” Raupp says.