Tiny and Triumphant: How a Team Approach Saved Robbins’ Cinquefoil from Extinction

IRENICRHONDA / CREATIVE COMMONS BY FLICKRPotentilla, called cinquefoil in English, is a genus containing over 300 species of annual, biennial, and perennial herbaceous flowering plants in the rose family, Rosaceae.

If you were hiking in New Hampshire’s White Mountains, you wouldn’t notice Robbins’ cinquefoil. It’s too small: an entire plant the size of a quarter that blooms with sunshine-colored flowers. It’s also rare, surviving above the White Mountains’ tree line and nowhere else. In the late 1800s, Victorian flora enthusiasts picked hundreds of Robbins’ cinquefoil plants, sometimes by the roots, to collect or sell. Roughly a century later, outdoor enthusiasts nearly trampled the plant to extinction as hiking gained popularity in the 1970s.

Recognizing the plant’s peril, the U.S. Fish and Wildlife Service placed Robbins’ cinquefoil (also known as dwarf mountain cinquefoil or by its scientific name, Potentilla robbinsiana) on the endangered species list. That move prompted a decades-long public-private partnership of seed collection, research, plant counting, education, and trial and error—ultimately saving Robbins’ cinquefoil. Now, with new genetic research poised to offer fresh insights, those who know the plant wonder how climate change might affect a species that has already endured so much. 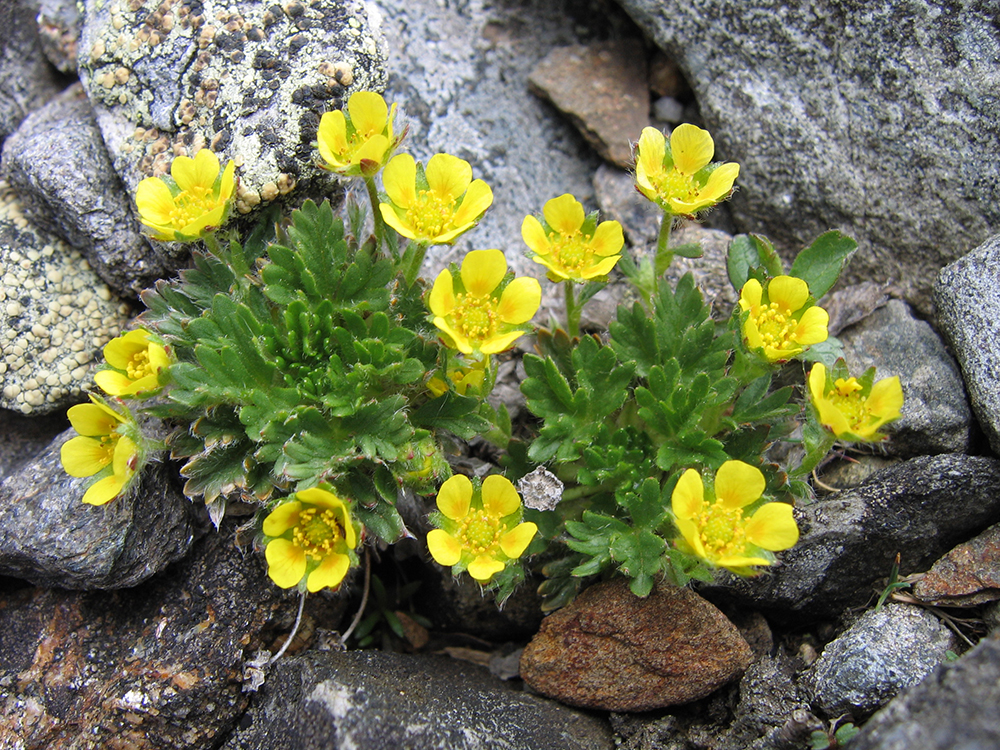 At the end of the last ice age, as glaciers receded, from New England down to Long Island, New York was a tundra. Then, as temperatures warmed, tundra plant species died out, except for a few, including in higher alpine areas, says Ken Kimball, retired director of research at Appalachian Mountain Club. “Potentilla is one of those species that’s a remnant of that meltout,” he adds. Robbins’ cinquefoil begs the question of whether the plant adapted to the White Mountains and only grows there, “or if it’s a sub-species of those species that continue to exist further north,” namely Potentilla hyparctica, Kimball says.

New Hampshire’s mountain environment above the tree line is harsh, with a winter wind that blows the snow and ice in a way that reminds Kimball of running sandpaper over the local alpine plants. Robbins’ cinquefoil survives because it thrives in these exact conditions, including frost heave. Frost heave happens when freeze-thaw cycles elevate soil, lifting plants out of the ground. “It’s kind of a Goldilocks situation with frost heave,” says Dan Sperduto, a botanist in White Mountain National Forest. “It likes just the right amount, where it’s too much for most alpine plants to be able to survive in, but not so much that it ends up killing the dwarf cinquefoil.”

Many young Robbins’ cinquefoil plants die within their first year. Those that survive begin flowering at eight to twelve years. The plant’s biggest threat has always been humans. In 1819, Ethan Allen Crawford and his father Abel built the Crawford Path, an 8 ½ -mile trail to the summit of Mount Washington—right through the Monroe Flats, the cinquefoil’s main habitat. Five years later, Thomas Nutall discovered Potentilla robbinsiana, alerting the public to the plant’s existence. “And it’s cute. It’s so anthropomorphic; it’s this little mounded plant with tiny yellow flowers,” says Susi von Oettingen, endangered species biologist at the New England field office of the U.S. Fish and Wildlife Service.

In 1973, there were 1,801 flowering Robbins’ cinquefoil plants, according to a census count completed by the United States Forest Service. In 1980, the species was put on the endangered species list; three years later, 1,500 were flowering in the White Mountains. In addition to the Mount Washington habitat, a small population unconfirmed until the mid-1980s grew on Franconia Ridge. 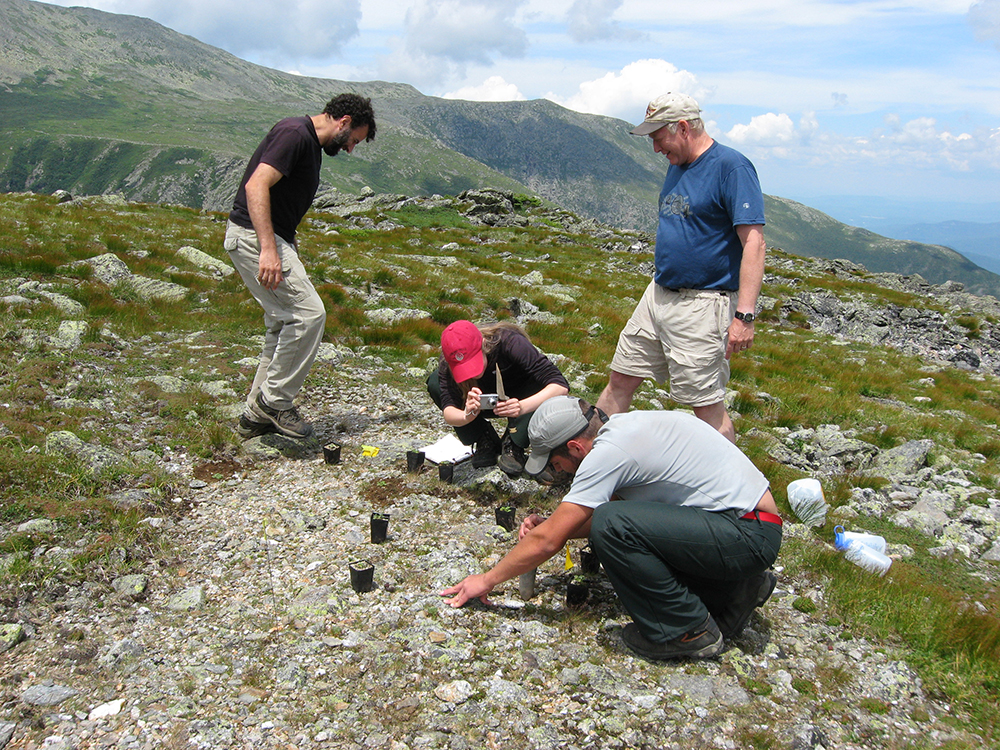 The U.S. Fish and Wildlife Service’s New England field office led the plant’s recovery effort, which became a collaboration with AMC, the White Mountain National Forest, and the New England Wild Flower Society. AMC, whose Lakes of the Clouds hut is near the Crawford Path, began by teaching hikers about Robbins’ cinquefoil and its location. Two years later, the organization and the Fish and Wildlife Service moved the Crawford Path, so it no longer transected the cinquefoil’s habitat. They studied hikers’ behavior to understand how to keep them from inadvertently crushing the small plants. Around that time, Kimball and scientists at the University of New Hampshire began researching Robbins’ cinquefoil’s longevity and behavior. “If we were going to be doing some transplants to create some new colonies, we had to understand a little bit of the genetics,” Kimball says.

To create those colonies, Kimball contacted Bill Brumback at the New England Wild Flower Society (now the Native Plant Trust) in Framingham, Massachusetts. Growing Robbins’ cinquefoil away from its habitat and transplanting the plants to the White Mountains put the organization on a learning curve. Growing the seeds closer to sea level required precise conditions, and successfully transplanting young plants to the White Mountains wasn’t easy. Brumback, now the Native Plant Trust’s director of conservation emeritus, and his team placed wrapped plants in a freezer before transporting them each June. “We had quite a few losses up there, so we switched techniques” in the late 1990s, Brumback says. “Ken Kimball suggested putting the plants there in July, and we did, and that turned out to be the best technique.”

“We would hike up and plant with gravel packs of plants and, in some cases, gallons of water,” von Oettingen recalled. Five or six people representing the four partner organizations would climb Mount Lafayette or drive up Mount Washington and hike to Camel’s Patch near Lakes of the Clouds. “It was a real adventure with these folks,” she says. 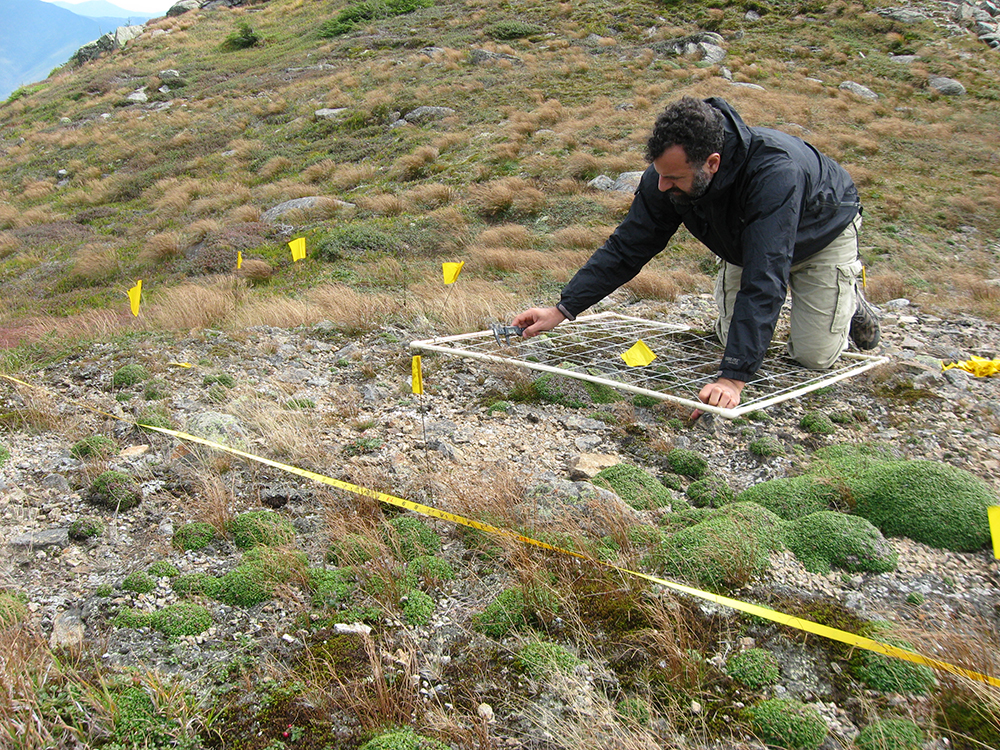 Not every transplant site thrived. Four did, well enough to rehabilitate the original Monroe Flats and Franconia Ridge populations over time, along with two new transplant locations. By 1999, some 4,500 adult Robbins’ cinquefoil plants—three times the 1983 population—were alive and well. The Fish and Wildlife Service determined in 2002 that Potentilla robbinsiana was no longer an endangered species, making it the first to be saved by recovery.

Today, with the cinquefoil population stable, AMC counts the plants every ten years. It takes two people most of the summer to tally the plants. In early 2018, scientists from the White Mountain National Forest, AMC and Beyond Ktaadn began consolidating existing Robbins’ cinquefoil data. They mapped the plant population in greater detail and developed a new sampling method that four to five people can complete in two days, Sperduto says. It debuted in 2019 and will be used again this summer. With the ten-year spacing of plant counts, “We weren’t sure if the variability we were seeing, for example, in the number of flowering plants per year; was it just variability, or was it declining?” Sperduto says. More frequent sampling should offer clarity.

New research into the species’ genetics has also begun. Hannah Vollmer, a graduate student at Plymouth State University, almost didn’t study Robbins’ cinquefoil because it seemed too obvious: “This is the rare plant in the alpine zone found here,” she says. But new research techniques and technology pulled her in. She’s collecting very small amounts of leaf tissue and extracting and sequencing its DNA to determine if the species is genetically uniform or diverse and how the plants reproduce: on their own (asexually), or through fertilization (sexually). Knowing this will show, as Kimball considered, if Robbins’ cinquefoil is its own species or a subspecies, surviving not only in the White Mountains, but also elsewhere in the world. Vollmer is also researching Potentilla robbinsiana samples collected more than a century ago, to understand how those plants differed from today’s.

Ultimately, her work could shape future conservation efforts. If Robbins’ cinquefoil reproduces via sexual reproduction, the plant could be transplanted to enhance its diversity—and therefore, its resilience. If it reproduces asexually, it would affirm current methods. If it is the latter, that “also makes us think about how resilient the species is to change,” Vollmer says.

That knowledge matters, because it’s unclear if climate change poses a threat to the plant that endures winter wind and snow scourings. For now, the microclimate above the tree line isn’t warming as fast as other places, insulating Robbins’ cinquefoil. Von Oettingen sees the species as a proverbial canary in the coal mine: “If that thing starts blinking out, and we can’t do anything about it other than move it further north, that is truly a sign that climate change is moving at a faster scale than we anticipated.”

Last July, Vollmer visited Robbins’ cinquefoil populations for the first time, with Sperduto. Along the way, “he’s pointing out all these little things that are on the ground, or pins that are on the ground marking different areas, and there’s a lot of history,” Vollmer says. She recalls that he told stories of a community that coalesced to research, to experiment with soil—of the decades spent saving a plant the size of a quarter.