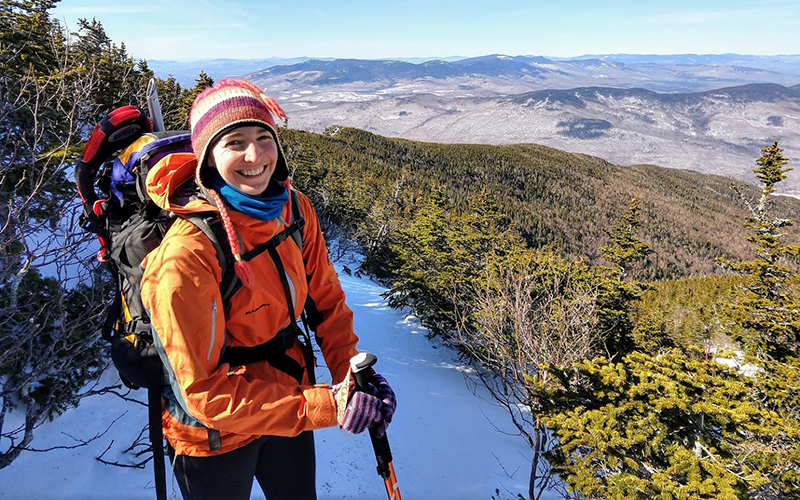 When AMC staff have questions about the club’s storied history, they call Becky Fullerton. Fullerton is AMC’s archivist, a role in which she manages the club’s more than 140 years of historical documents, books, and memorabilia for AMC’s Library & Archives. Fullerton was born in Vermont but grew up in Southern New Hampshire. She received a BA in art history and studio art from Hartwick College in Oneonta, N.Y., before completing an MA in museum studies from Harvard’s extension school. Originally thinking she’d curate works of art for a museum, Fullerton began working with AMC in 1999 at a seasonal job in AMC’s huts and became the organization’s archivist in 2005. We sat down with Becky, virtually, to hear how the history buff approaches her work.

Walk us through a day in the life of an archivist.

Most people have no idea what an archivist really does, and no two days are exactly the same, which I love. But basically, my main priority is taking care of the entire historical collection that AMC has; everything from the very first meeting minutes when we formed the club back in 1876 to digital files made this year. I’m here to collect that stuff, maintain it, preserve it, and eventually, hand it off to some other archivist. There’s also a public-facing aspect to the job, where I’m answering questions that people ask about our history. A typical day starts with checking my voicemail and email inbox. For example, I had a volunteer and member email me about the history of the club in terms of race, which was a super relevant question—especially today.

How did you answer the volunteer’s question about AMC’s racial and inclusion history?

Though we never had any explicitly discriminatory regulations for membership, there were certainly implicit biases within the way the club was initially set up. There was a time in the club’s history where you had to have two people sponsor your membership. And there was also a $2 dues fee and that would have been a barrier, and then of course, you had to live in New England—so there were these typical, systemic, built-in things. Today, we recognize that the club’s history may have been inherently biased for membership. And it was just part of the culture in a way at that time. It’s really interesting looking into our history through that lens. That being said, AMC formed post-Civil War, so we had a lot of abolitionists, a lot of women suffragists. But by that measure you can look into our history and find members who were known to be anti-Semitic, or known to be part of the eugenics movement, so you know, it’s a really tangled web of history.

What is your favorite part of the job?

I think it’s being the caretaker and steward of all of this history and the fact that I’m the only person that gets to do this job that makes it feel so special. Many archivists work alone; there’s a joke where we call ourselves the “lone arrangers.” But I love having this very parental feeling toward our collection. Like, it’s yours to protect and take care of; you’re adding to it and watching it grow, and that’s your job as long as you’re there to do it. You make sure people know and love the collection as much as you do, kind of holding it up to the light.

You have 144 years of AMC history at your disposal. What’s the strangest or most interesting piece of our history that you’ve come across?

I am examining this box of what are called summit registers. What they are, basically, is the old paper notebooks that would have been placed in a glass bottle or another kind of airtight container at the summits of various mountains. We have about 24 of these that date back to 1858. My favorite is this register from Mount Pierce (at that time known as Mount Clinton) from 1900, when two hikers named Curtis and Ormsbee from New York City were on their way to Mount Washington. They were climbing the Crawford Path on June 30 and were overtaken by bad weather. Curtis made a bid to go to the summit and find help, but they didn’t make it. When help came, they found this little bottle at the peak of Mount Clinton, so Curtis and Ormsbee did make it to the peak, but the register was the last time they put pencil to paper. So, kind of creepy, but very interesting.

What do you wish more people knew about AMC and its history?

I would want people to be aware that we weren’t conservationists right off the bat. We often say that we’re the oldest conservation club, but that isn’t exactly true. I think, when AMC was first founded, we hadn’t really discovered the concept. I don’t think at the time that conservation was much of a movement. Prior to the late 19th century, AMC was really just a bunch of people who enjoyed the outdoors, enjoyed hiking. However, the earliest members were a lot of academics, etymologists, mathematicians, and linguists, but I just don’t think anyone really came around to the idea of preserving natural areas for a while. I’d like to give people kind of a cursory awareness of AMC’s evolving history—that it started out as just a very practical hiking club until well after the turn of the century.

Do you find that you look at outdoor recreation and environmental concerns with a more historical perspective because of your work?

Oh, absolutely. Every time I go for a hike I want to know when was this trail cut, who were the trail builders here. Last year, I was doing some trail running on Mount Hale, which was named after Rev. Edward Everett Hale, and there’s this trail on the back side of that called Lend-A-Hand Trail, which was the name of a newsletter that Hale started. The trail name ties back into the name of the mountain which ties back into the person. A person on [activity tracking application] Strava named a segment of trail “Man without a Country,” which I thought was so cool, because, of course, “Man Without a Country” was a story written by Rev. Hale. It’s so interesting to trace the history behind the trail you’re on.

What is your favorite outdoor activity?

I love trail running because the quicker pace allows you to get farther out into wild places in a day. However, I’ve been a hiker most of my life, and I appreciate the chance to move slowly through nature and to deeply see and feel every part of the trail and environment.

AMC’s 150th anniversary is coming up in 2026. Are you working on any archival projects to mark that milestone?

Our 150th anniversary is a big deal, and it is never too early to think about how we are going to mark the occasion. I know from past anniversaries that AMC’s Library & Archives need to be prepared to field a huge variety of requests from inside and outside AMC, for every audience that wants to tell our story. I’ve started to make a concentrated effort to gather source material on the many threads of our history into kind of a giant topical file. As 2026 draws closer, AMC will have a rich collection of raw materials with which we can write about, plan activities and presentations for, and celebrate our accomplishments. I’ve heard there were some pretty great things done for our 125th anniversary in 2001, and I hope we’re able to pull out all the stops for this next milestone.