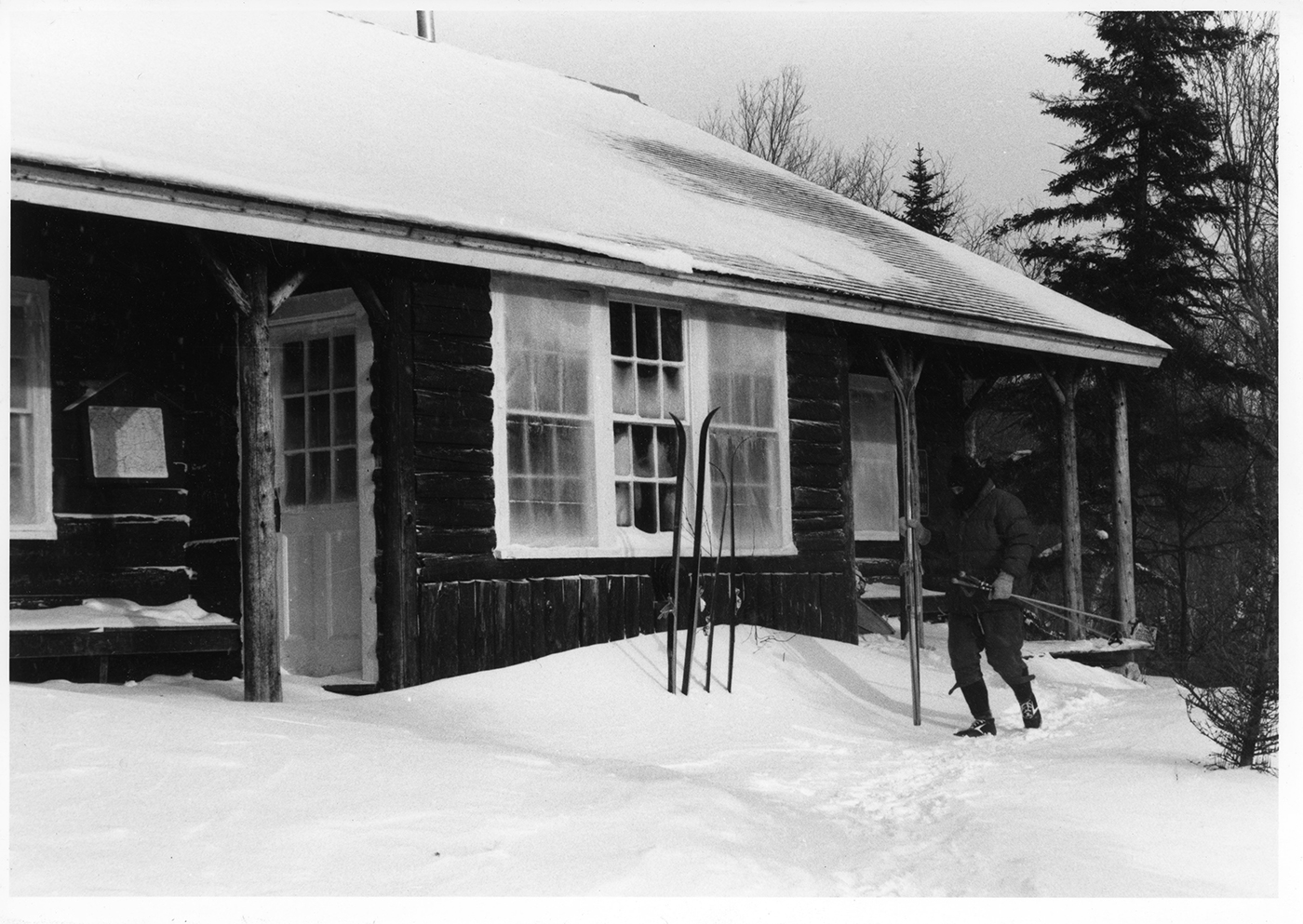 AMC LIBRARY AND ARCHIVESA skier outside Zealand Falls Hut in the 1980s.

AMC’s high-mountain hut system in New Hampshire’s White Mountain National Forest was well-established by the early 1970s, having provided shelter and beds to three-season hikers for decades. In December 1972, Zealand Falls Hut became the first hut to welcome overnight guests through the winter with the hiring of AMC’s first winter caretaker, Chris Hawkins. For a reservation fee of $4, guests could stay overnight at the hut but needed to provide their own sleeping bags and food, having use of the kitchen under the caretaker’s guidance.

“Having these three little huts open in the winter really expands how many seasons of magic the mountains have to offer, without demanding that all winter recreationalists are prepared to winter camp,” Taylor says. “The huts are a refuge in more ways than one, and I’m very proud of our current caretakers’ work in carrying on the legacy of AMC winter huts.” 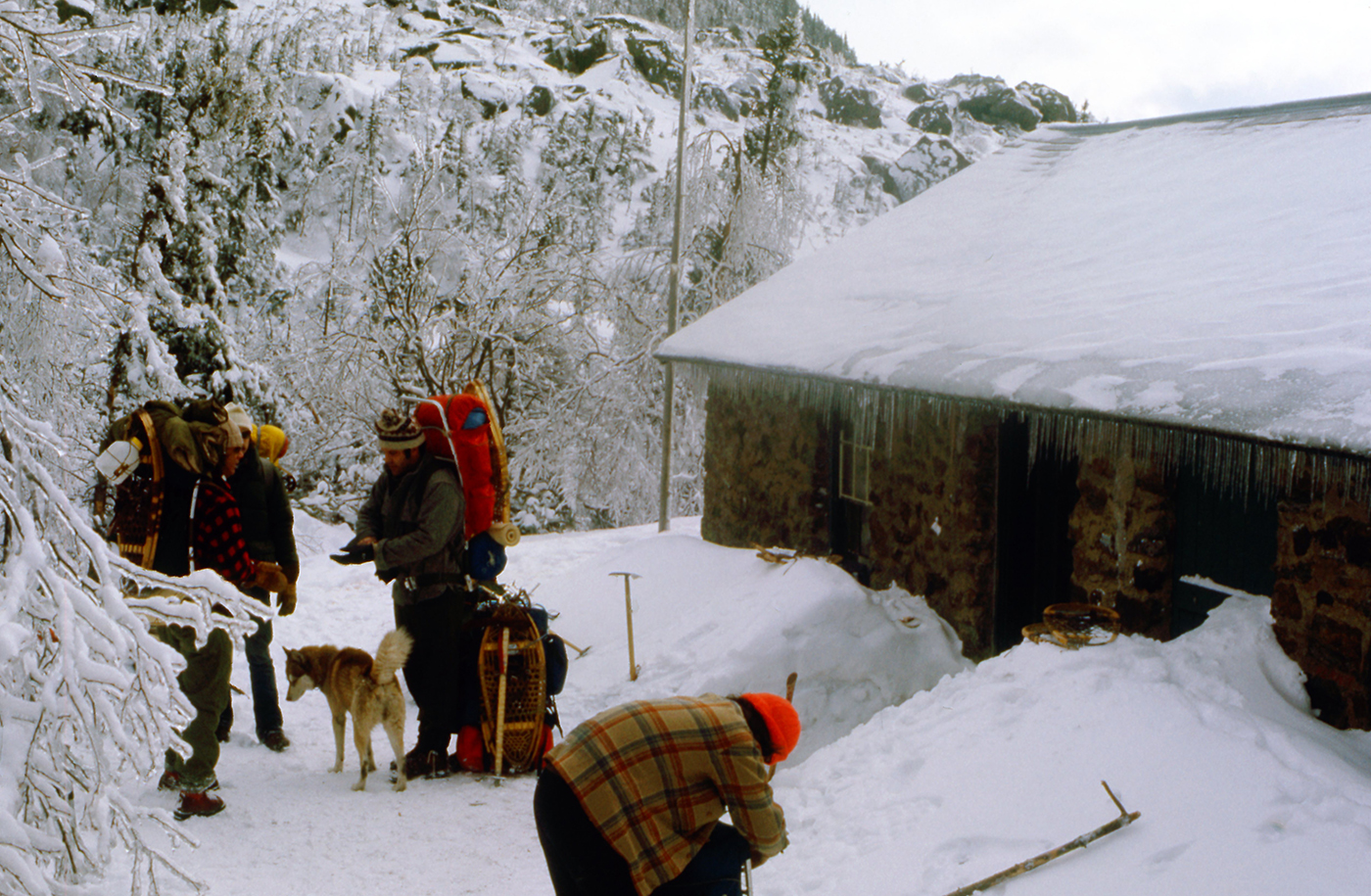 AMC LIBRARY AND ARCHIVESWinter hikers prepare to take on the day outside Carter Notch Hut in 1975.

On December 21, 1974, AMC’s Carter Notch Hut opened for winter. Both Zealand Falls and Carter Notch huts were billed as not only great snowshoe destinations, but fun and challenging options for backcountry skiing as well. 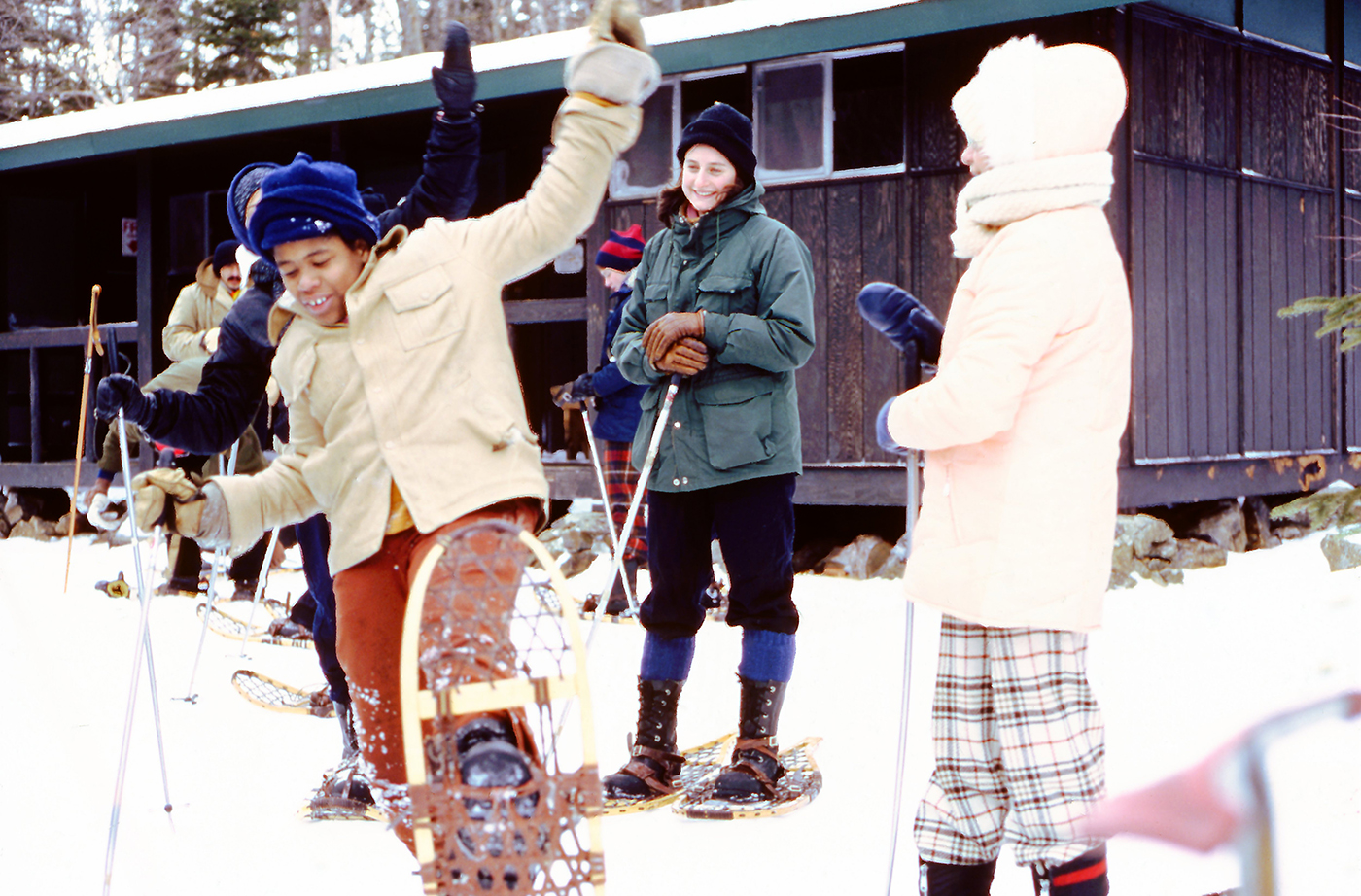 AMC’s Youth Opportunities Program, founded in 1968, never let the season determine the availability of trips from which their youth group trainees could choose, according to Becky Fullerton, AMC’s archivist. Here, youths from the Greater Boston area experience winter in the White Mountains and learn new skills like navigating trail terrain on snowshoes. 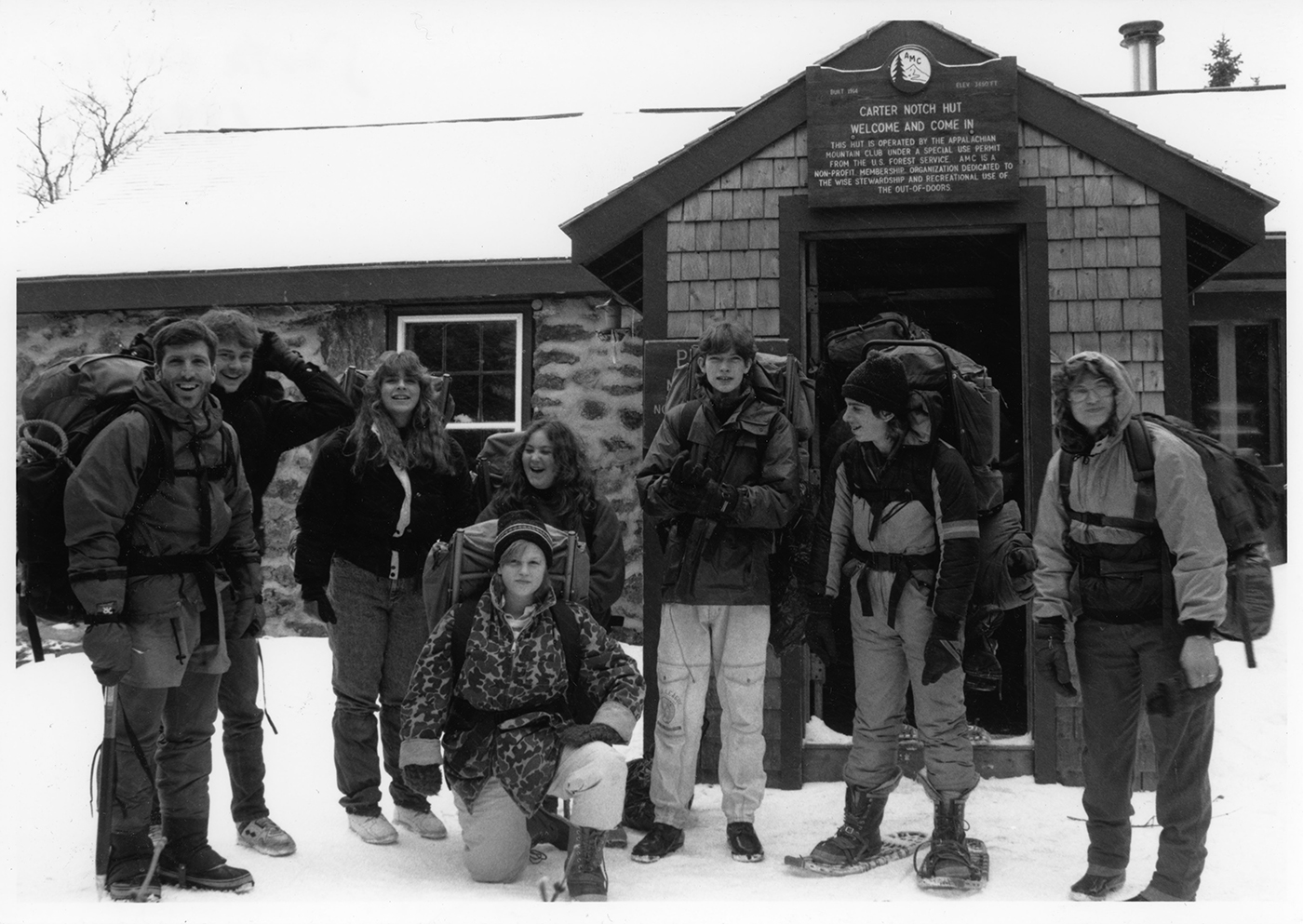 AMC LIBRARY AND ARCHIVESHikers at Carter Notch Hut in 1991.

Teens and adult leaders enjoy a break at Carter Notch Hut in 1991. By the 1990s, the winter huts had been well incorporated into AMC’s guided program offerings. January 1991 featured a weeklong guided hut-to-hut trek with a two-night snowshoe trek to Carter Notch Hut and a recuperative night at Joe Dodge Lodge in Pinkham Notch, followed by a ski tour to and around Zealand Falls Hut. The rest of January and February were peppered with shorter weekend tours to both huts, according to records from the AMC Library and Archives. 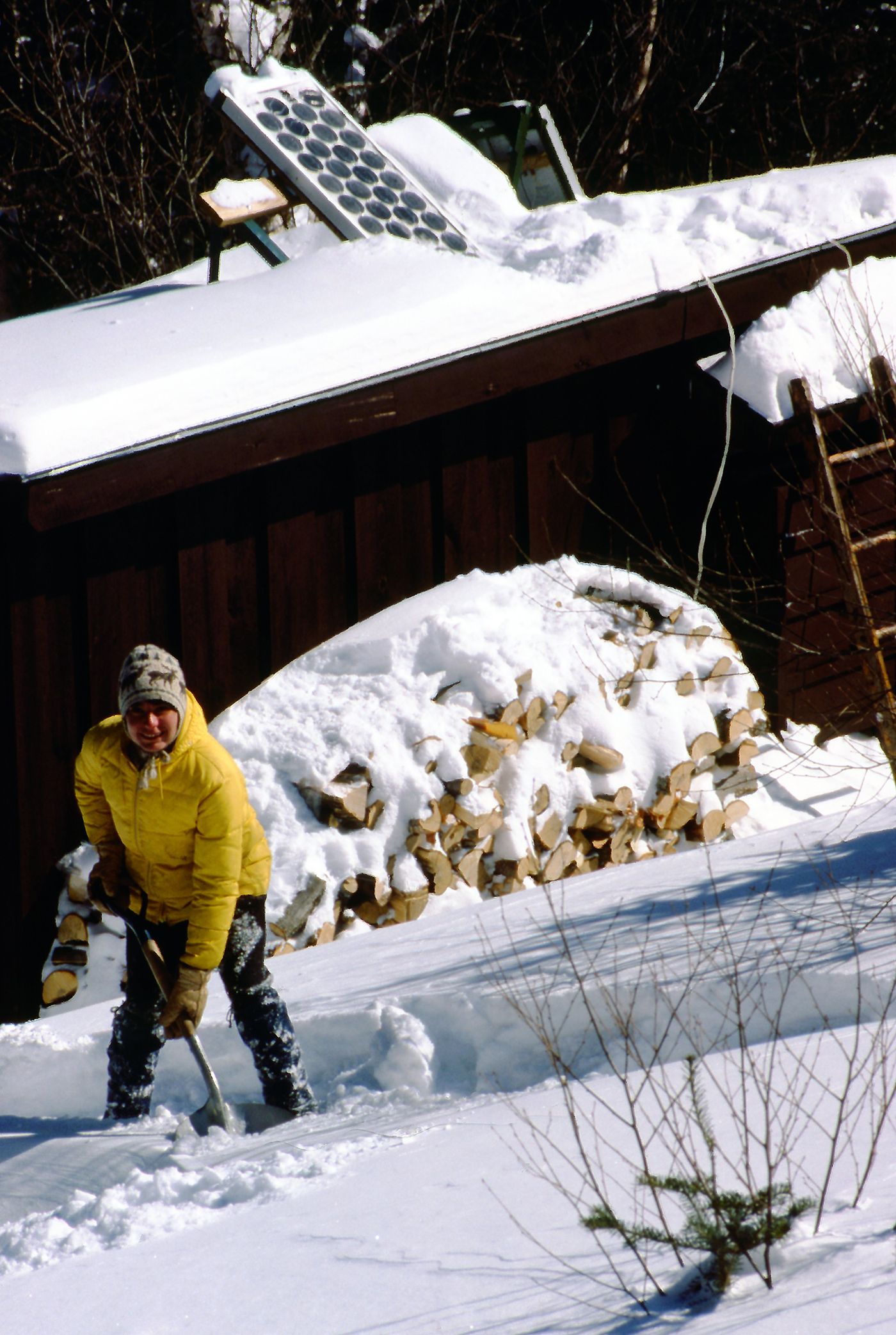 Since the program’s inception, a key responsibility for winter caretakers is clearing stairs, decks, and paths around the huts after snow has fallen.

Lonesome Lake Hut wouldn’t open for the winter overnight stays until 2002, under former AMC Huts Manager Dave Herring. The hut was even modified for winter use in mind: a woodstove and woodshed were added, insulated windows and door installed, and a second roof, with a steeper pitch to shed snow, built. 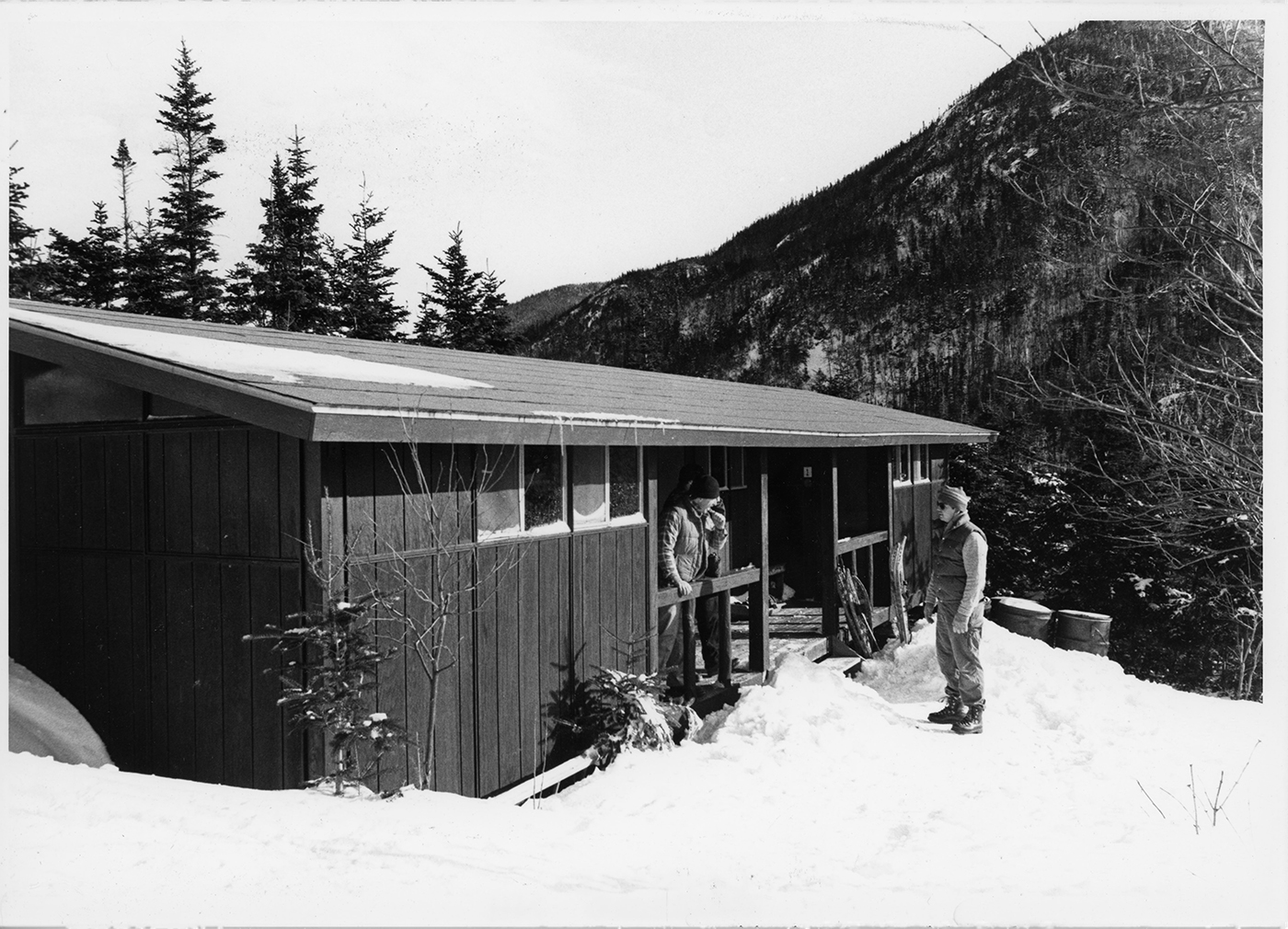 AMC LIBRARY AND ARCHIVESThe Carter Notch Hut bunkhouse in winter, as it looked in the 1990s.

Making a winter hut stay a little more like winter camping is the fact that though bunks are indoors, they are unheated, Fullerton says. At Carter Notch (pictured) and Lonesome Lake huts, bunks are entirely separate from the main hut building. Although there is a woodstove in each hut, stoves are lit only in the evening to make it slightly more comfortable while cooking, eating, and relaxing around the hut, Fullerton adds. 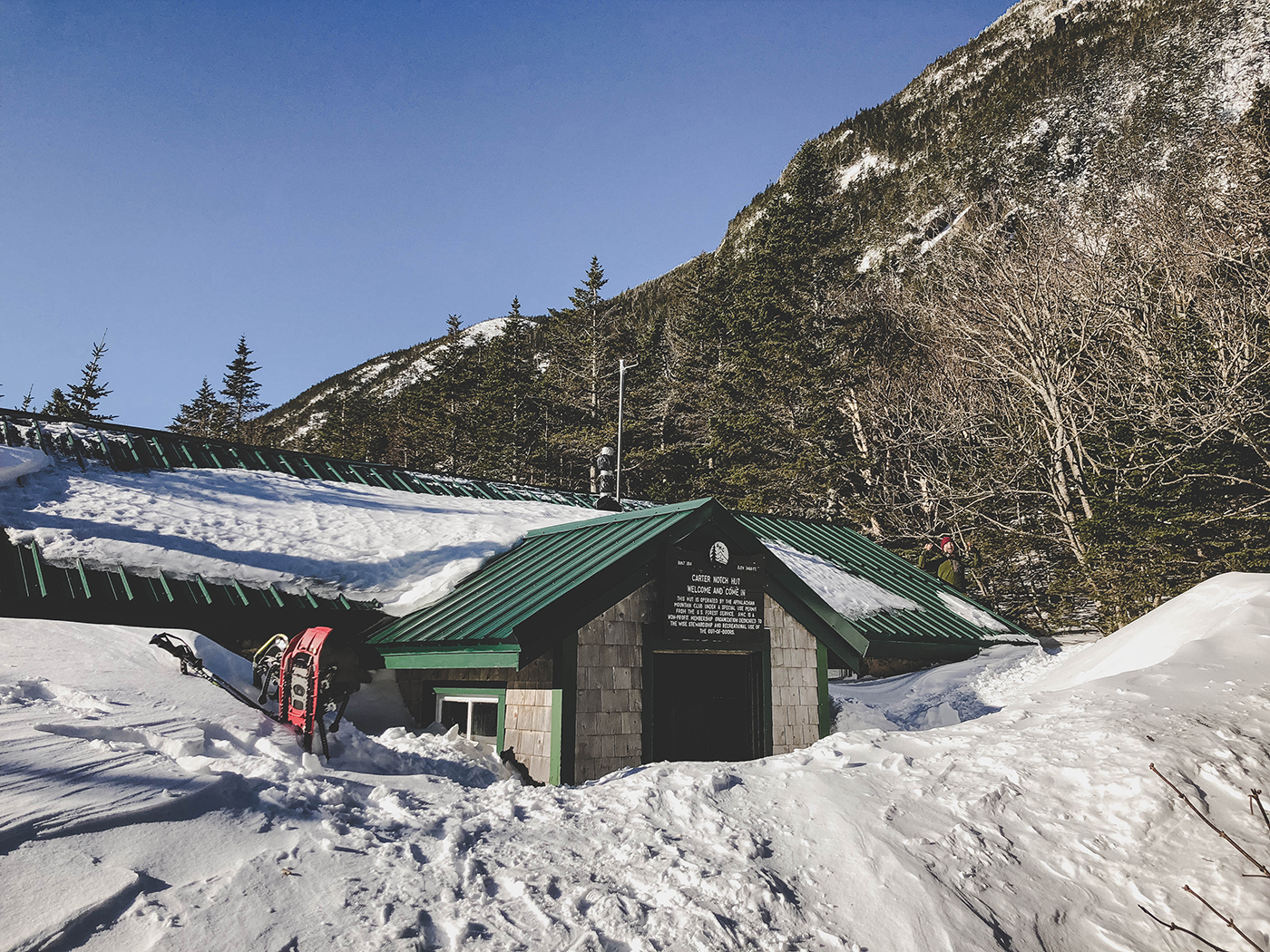 AMC employs six winter hut caretakers—two each for each hut—who flip-flop weeks so that they are able to refresh, recharge, shower, and warm up between stints. According to Huts Manager Bethany Taylor, this schedule gives caretakers a pleasant contrast from their weeks in the huts—which can be quiet and full of both manual labor with shoveling and wood chopping and pumping, hauling and boiling potable water—and could wear a person down without the breaks.

“We’ve become much more cognizant of the emotional and mental toll that a winter of cold solitude can take on caretakers and have adapted the work schedule accordingly so that our caretakers operate from an excess of comfort, so that they have more to share with the guests, which in turn improves the guests’ experience of being in a winter hut,” Taylor says.