For centuries, public lands have served as the backdrop for important moments in civil rights history. Several civil rights leaders have marched on the streets of our nation’s largest cities, stood their ground in national parks, or sought refuge and inspiration in nature, all in the name of justice and equal opportunity for disenfranchised groups. Though there are several places that have been important to this movement, the following examples focus on the African American freedom struggle. 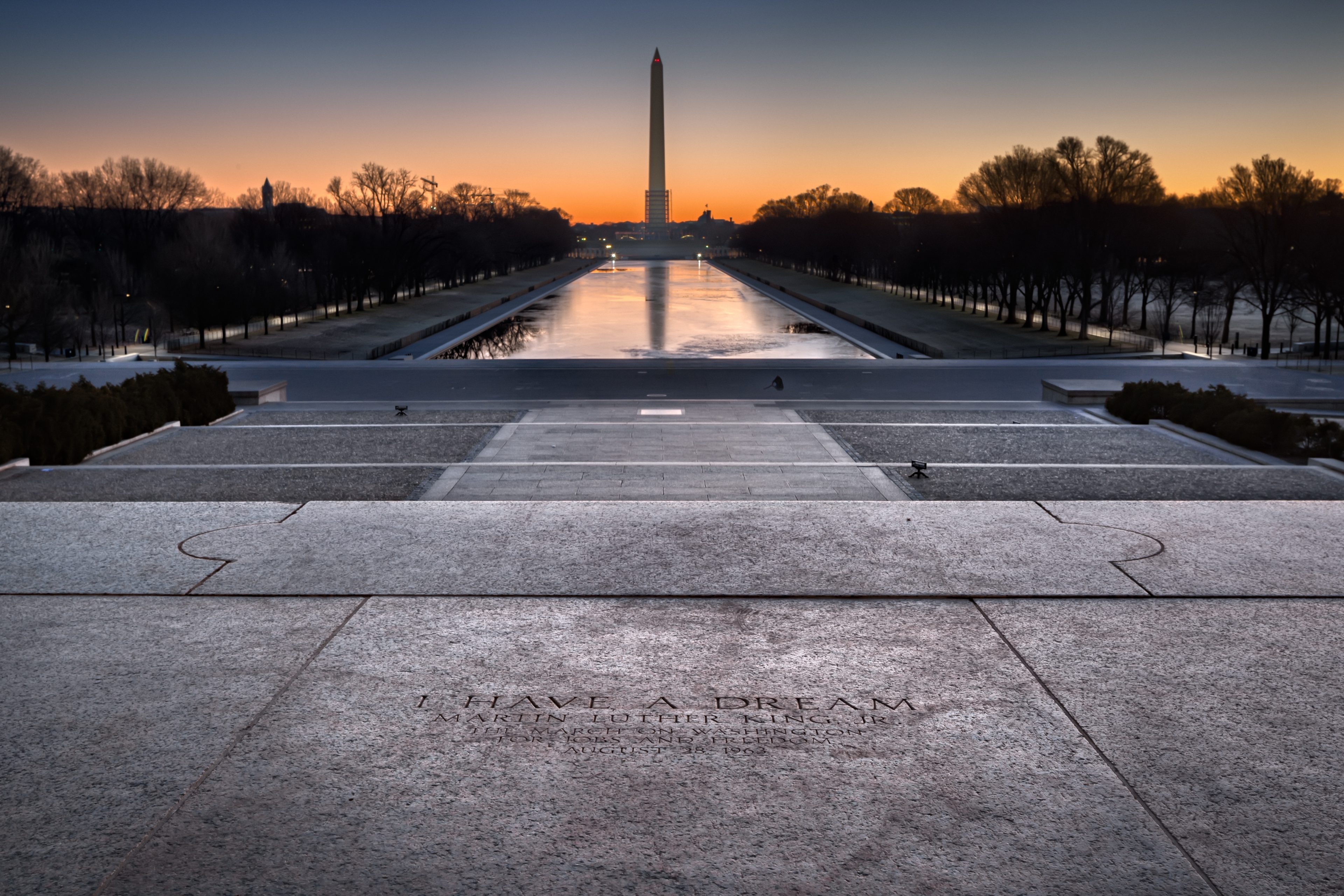 “I Have a Dream” inscription at the Lincoln Memorial

On August 28, 1963, Dr. Martin Luther King Jr. delivered his famous “I Have a Dream” speech from the steps of the Lincoln Memorial. King addressed over 250,000 people who had joined the “March on Washington for Jobs and Freedom” and gathered on the National Mall to condemn employment discrimination and civil rights abuses against African Americans and other disenfranchised groups. This mile-long march started at the Washington Monument and ended at the Lincoln Memorial, in honor of the president who had signed the Emancipation Proclamation a century earlier. In his speech, Dr. King urged America to “make real the promises of democracy” and shared his hopes that his “four little children will one day live in a nation where they will not be judged by the color of their skin but by the content of their character.” This historic event became one of the signature moments of the Civil Rights Movement and contributed to the passage of the Civil Right Act of 1964, which prohibits discrimination on the basis of race, sex, religion, or nation origin, and the Voting Rights Act of 1965, which prohibits racial discrimination in voting. Today, an inscription sits eighteen steps from the top landing of the Lincoln Memorial, commemorating the exact spot where Dr. King stood to deliver his momentous speech, reminding us that his words are still as impactful and relevant as ever. Learn more here. 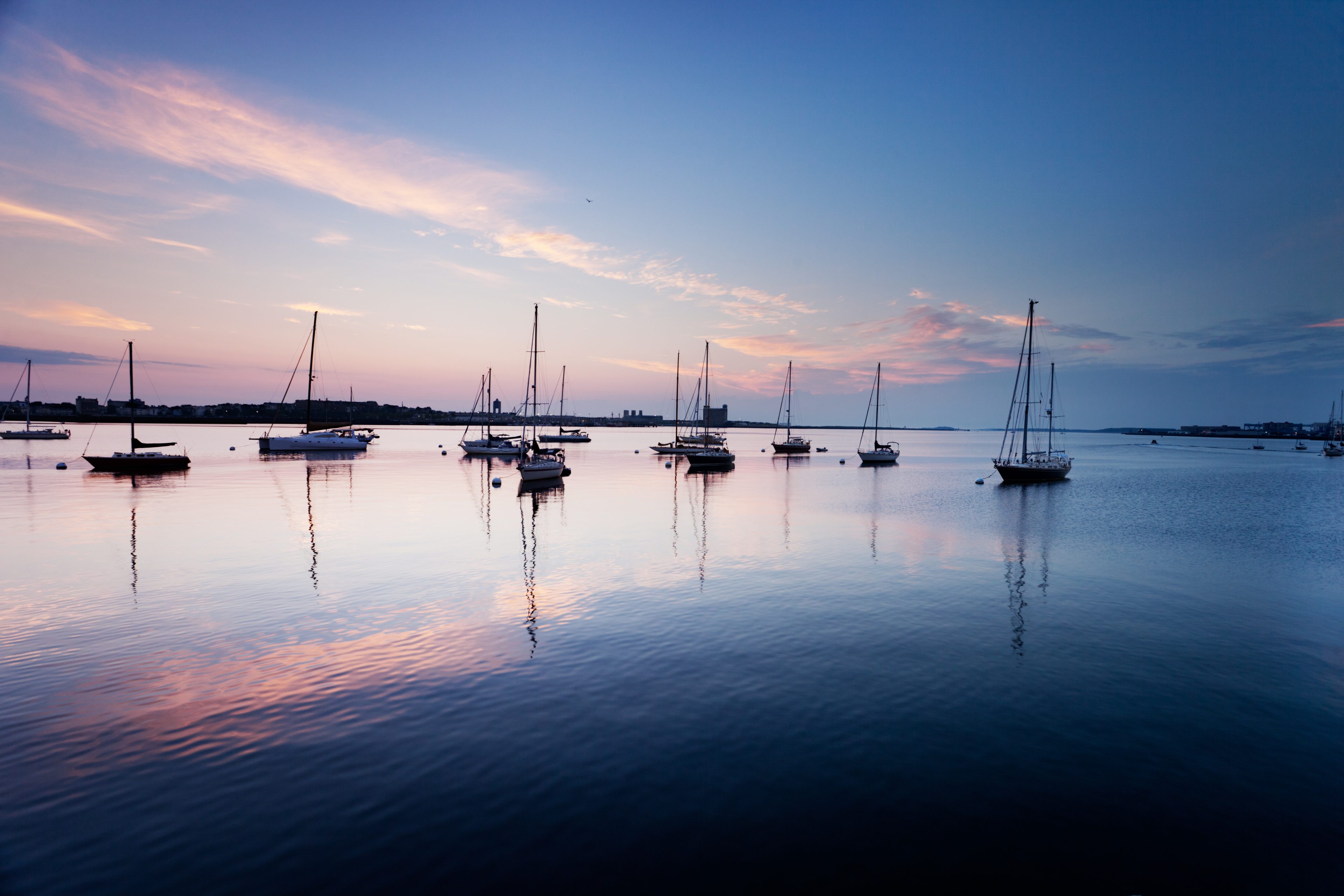 In the years leading up to the American Civil War, Boston, Massachusetts served as a location where enslaved individuals could attain freedom. As the capitol of one of the earliest states to abolish slavery, Boston had a tight knit community of abolitionists who were able to offer resources and support to those attempting to escape enslavement. Several slaves escaped from southern US states by stowing away on ships bound for northern ports. This made Boston Harbor one of the most crucial destinations on the Maritime Underground Railroad, a network of people who aided escaped slaves from the South.

However, freedom seekers faced several risks when traveling by sea. Not all captains and crews were sympathetic to the abolitionist cause, and several enslaved people had to sneak on and hide. In one famous example, Phillip Smith, an enslaved man, made headlines in December of 1858 when he was discovered as a stowaway by the captain of a ship from Wilmington, North Carolina. The headline “Escape of a Fugitive Slave from a Vessel in Boston Harbor” appeared in several Boston newspapers that day. Despite several threats from the captain, Smith eventually made it to safety when he jumped overboard and swam to Lovells Island. He later hailed a passing ship and was able to reach abolitionists in Boston. This history is commemorated at Boston National Historic Park. Learn more here. 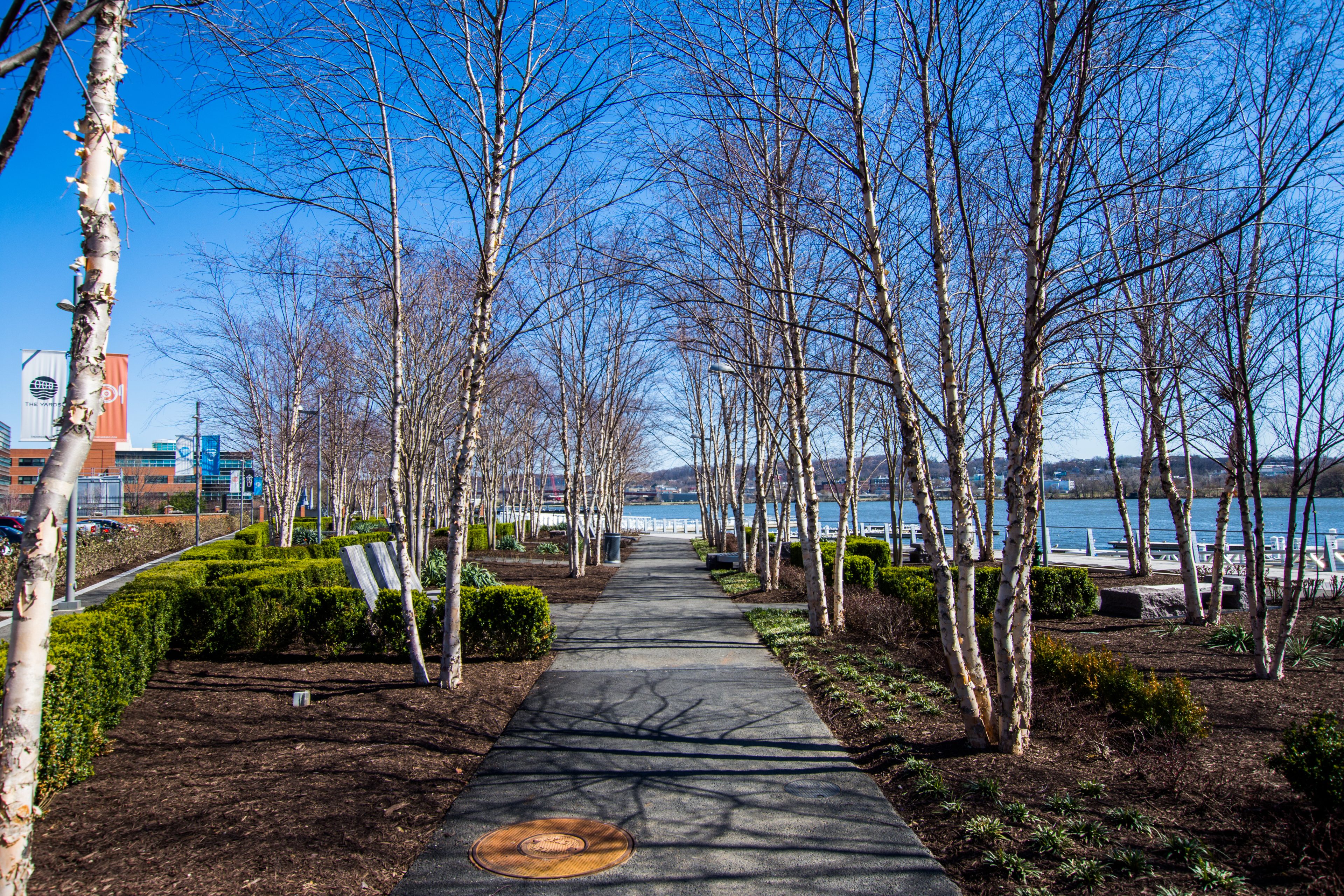 Throughout the 20th century, the neighborhood of Anacostia was known for its racial tensions and segregated policies. Two communities – one black and one white – existed on opposite sides of the neighborhood. For nearly a century, these communities remained segregated – they had their own schools, recreation facilities, and organizations. However, as racial tensions grew during the Jim Crow era, some residents began to organize and advocate for equity and equal opportunity to shared spaces. Specifically, communities began to fight for access to public spaces at Anacostia Park.

Between 1929 and 1950, the city began to slowly integrate their parks and recreational facilities. For example, in 1929, several African American golfers wrote letters, signed petitions, and met with officials, after discovering that the conditions on their golf course were notably worse than those in the city’s other, white, courses. As a result, in 1939, Anacostia Park’s Langston Hughes Golf Course opened, replacing the previously segregated ones. Similarly, the pools at Anacostia Park had a deep history of segregation. In 1949, when the city announced that they would desegregate Anacostia Pool, several confrontations broke out between black and white visitors to the pool. After two days of conflict, multiple arrests and injuries, the U.S. Department of the Interior closed Anacostia Pool for the rest of the summer. It reopened on a non-segregated basis in 1950. Today, Anacostia Park is operated by the National Park Service, and it is one of Washington D.C.’s largest recreation areas. Learn more here. 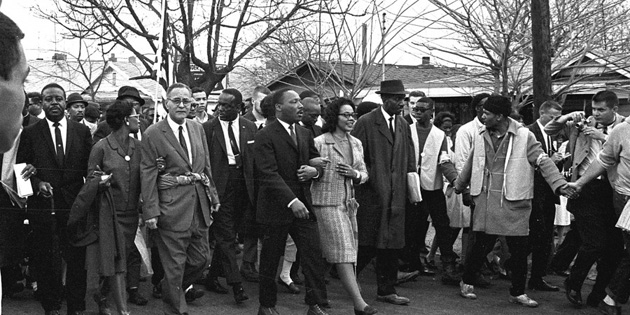 On March 21, 1965, Dr. Martin Luther King Jr. led approximately 3,200 nonviolent demonstrators from Selma, Alabama to the state capitol in Montgomery. During this 5-day, 54-mile march, Dr. King and other supporters campaigned for equal voting rights, slept in fields, and walked roughly 12 miles a day. By the time they reached the capitol on March 25, 25,000 people had joined in their effort. Less than five months later, President Lyndon B. Johnson signed the Voting Rights Act of 1965, which outlawed discriminatory voting practices against African Americans and other disenfranchised groups. In 1996, the Selma-to-Montgomery National Historic Trail was created by Congress under the National Trails System Act of 1968. This trail follows U.S. highway 80 and several local streets. Learn more here. 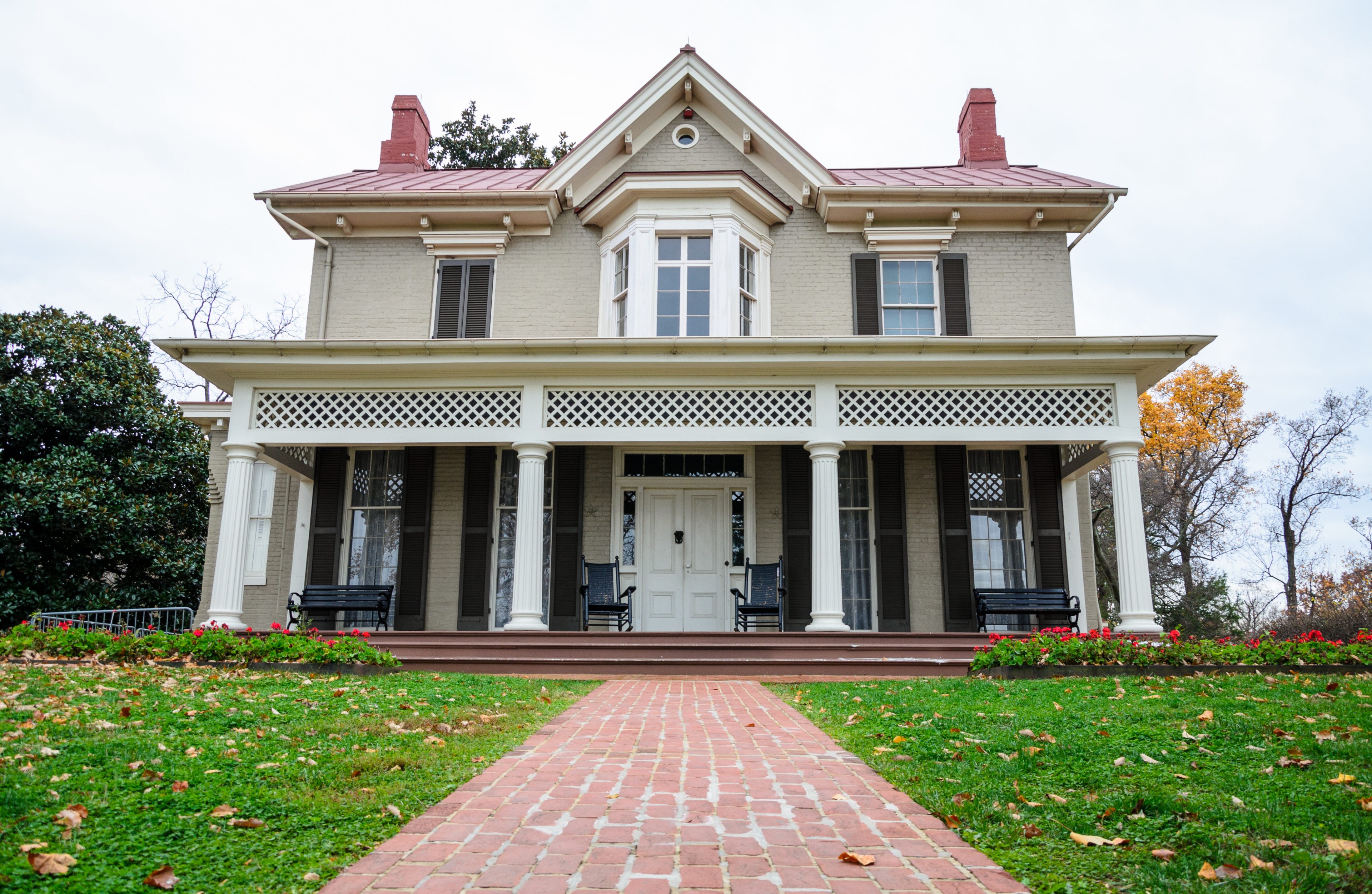 In 1818, Frederick Douglass was born into slavery near Talbot County, Maryland. After enduring the slave system’s many cruelties and several failed attempts at escape, Douglass finally gained his freedom in 1838. He then dedicated his life to becoming a writer, abolitionist, and activist, focusing on exposing the immorality and inhumanity of the slave system and advocating for the rights of marginalized groups. In the summer of 1877, Douglass purchased ten acres of farmland on the outskirts of Washington D.C. and resided there for the last 17 years of his life. His property, which sits on a hill with a gorgeous view of the area, serves as a metaphor for the heights to which he rose in life. Douglass affectionately named his property Cedar Hill because of the cedar trees that grew around the area. His home, which is surrounded by nature, served as a respite from the trauma of his earlier life. Today, his home at Cedar Hill is a National Historic site, open to the public. Learn more here. 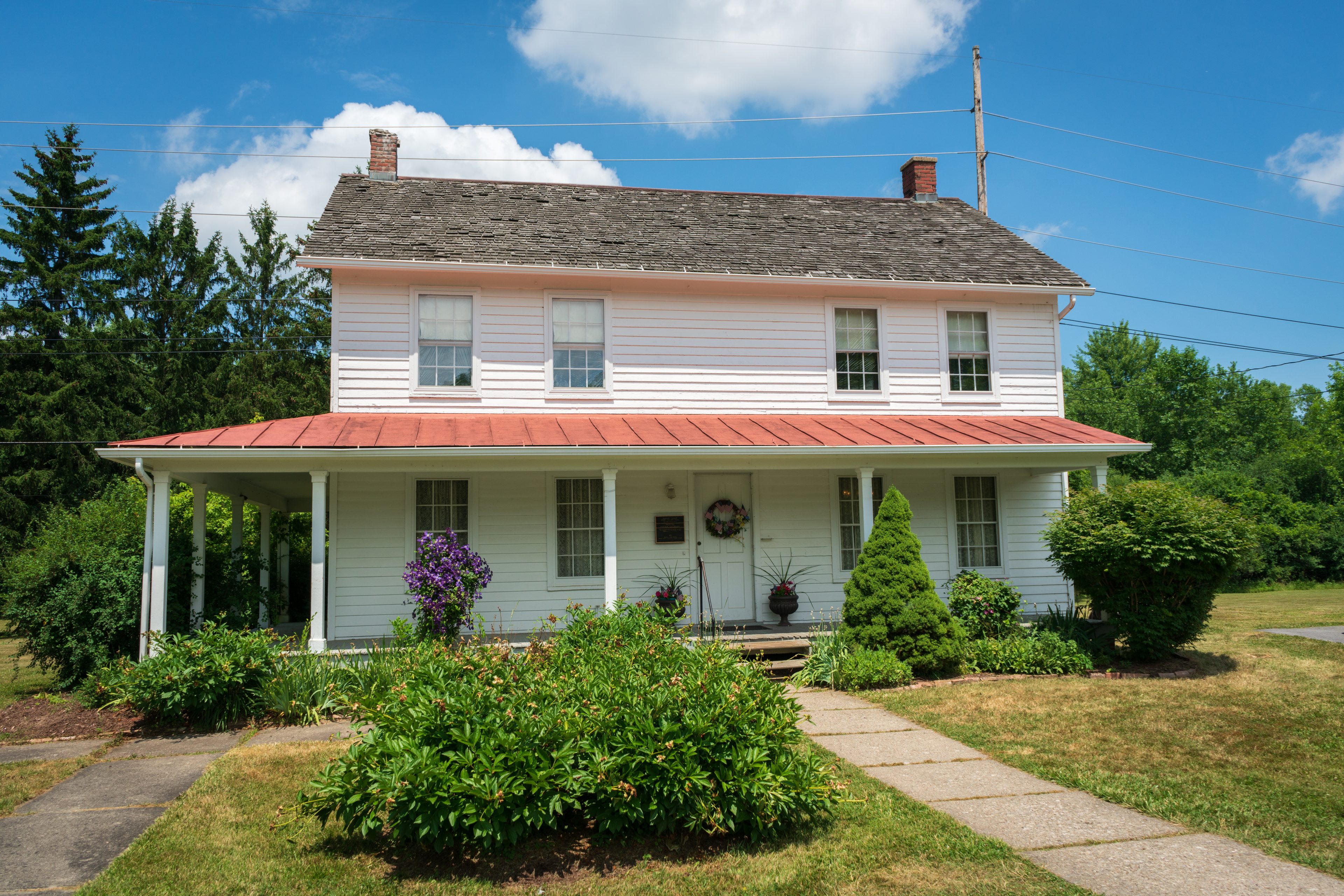 Like Frederick Douglass, Harriet Tubman was also born into slavery in the early 19th century. She was able to escape in 1849 after her enslaver died, and despite the struggles she faced, she became one of the most influential figures in history. Tubman was known as the “conductor” of the Underground Railroad and is believed to have personally led at least 70 enslaved people to freedom, including her elderly parents. She did so, in part, by traveling at night, employing her deep knowledge of the region’s environment and wildlife to help communicate and survive. Later in her life, Tubman settled in New York and helped establish schools for freed black youth, co-founded the National Association of Colored Women, and built the Harriet Tubman Home of the Aged to help those who were formerly enslaved. This home is a part of the Harriet Tubman National Historic Park in central New York, along with the Thompson Memorial AME Zion Church, Tubman’s place of worship, and the Harriet Tubman Visitor Center. Learn more here.

For more information and to discover more places relevant to civil rights history, view the We Shall Overcome Travel Itinerary from the National Park Service.